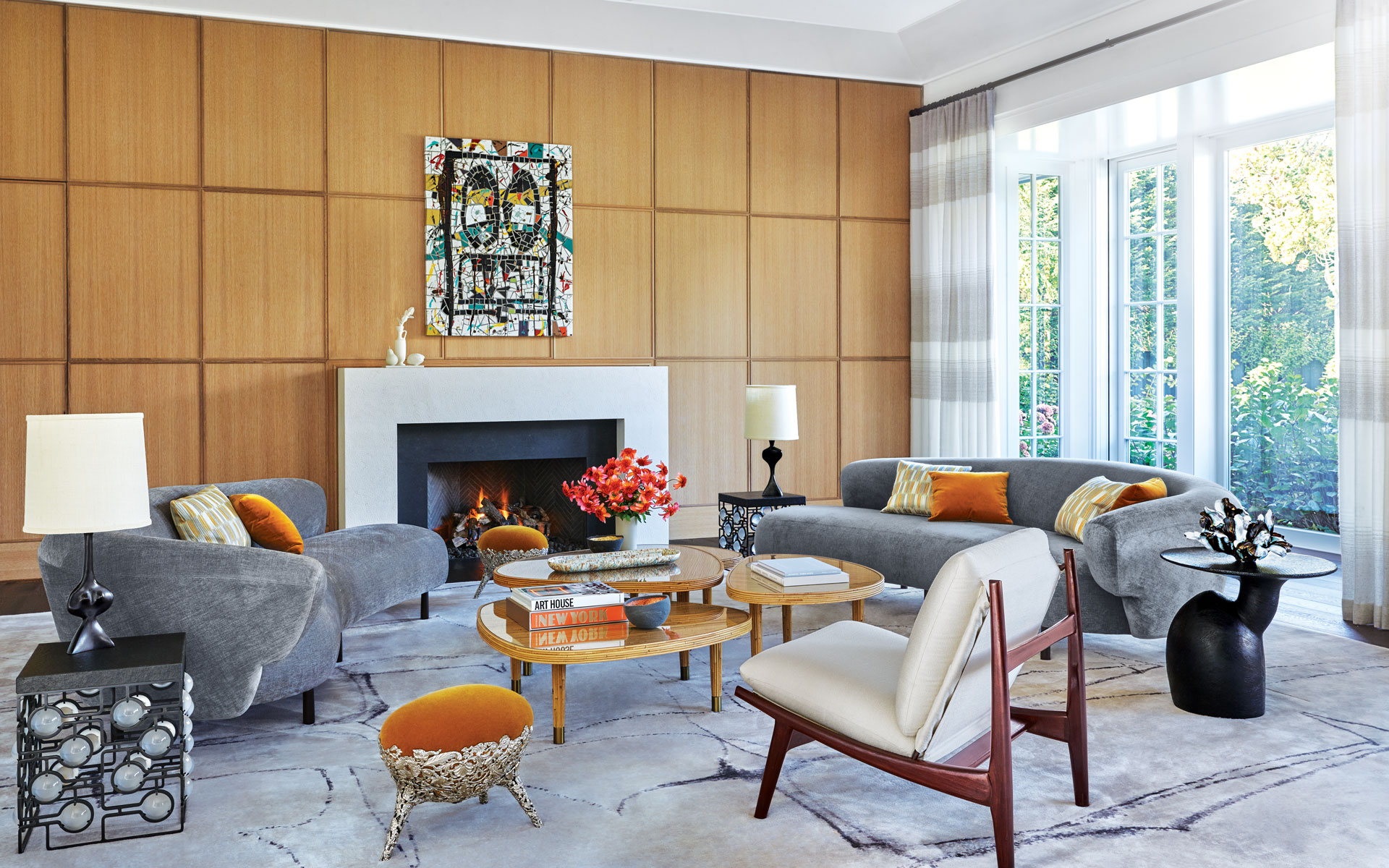 Rarely does a new house fit perfectly into a mature property right away. Materials require time to weather. Landscapes need an opportunity to repair. Gardens gradually fill in. Yet when the creative team includes architect Thomas A. Kligerman and landscape designer Edmund Hollander—who have worked together on dozens of projects and are seasoned pros at melding the new with the already there—the odds of instant harmony rise considerably. Add to the mix a deft interior designer like Francis D’Haene, and the final composition can be symphonic. 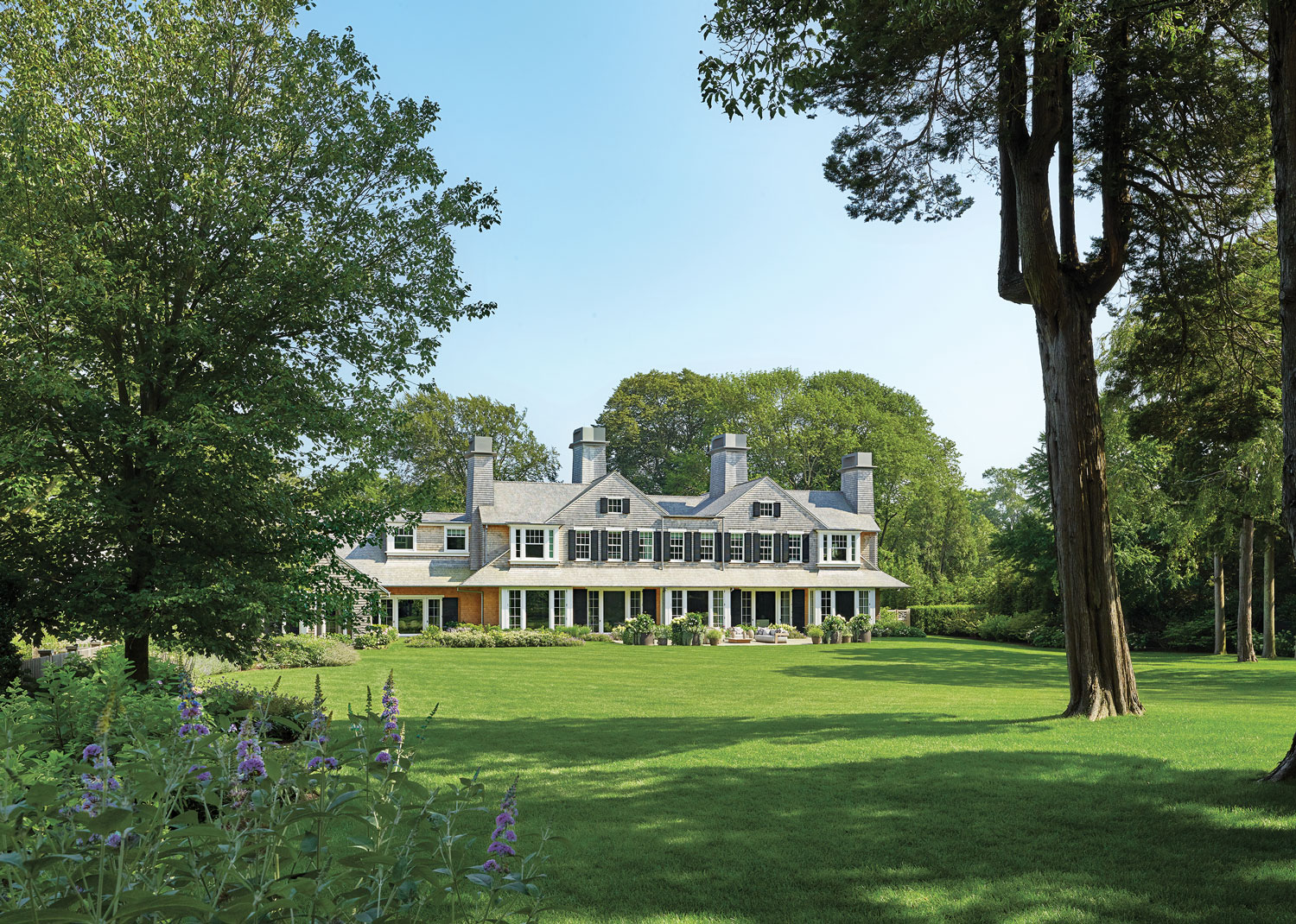 A few years ago, the trio was commissioned to create a spacious retreat in East Hampton for a New York City couple with three children and an ample collection of contemporary art. The architect, a principal of the firm Ike Kligerman Barkley, took note of the neighboring 19th-century shingled houses and envisioned an estate with a timeless spirit. “We didn’t want it to be the sore thumb house,” Kligerman recalls. “We wanted it rooted in tradition and to be a good setting for the art, but it couldn’t be a shrinking violet either.”

The six-bedroom home, in fact, has two personalities. The muscular exterior is pure Eastern Seaboard Shingle Style, with an imposing yet gracious symmetrical presence, including a double-gabled roof. Generously scaled windows are framed by black shutters, contrasting the cedar shingles that quickly aged to a patrician gray. Less traditional are the stainless-steel caps atop the five chimneys, which, along with a genial snaillike marble sculpture by Alma Allen installed at the entrance, hint at a more modern story inside. 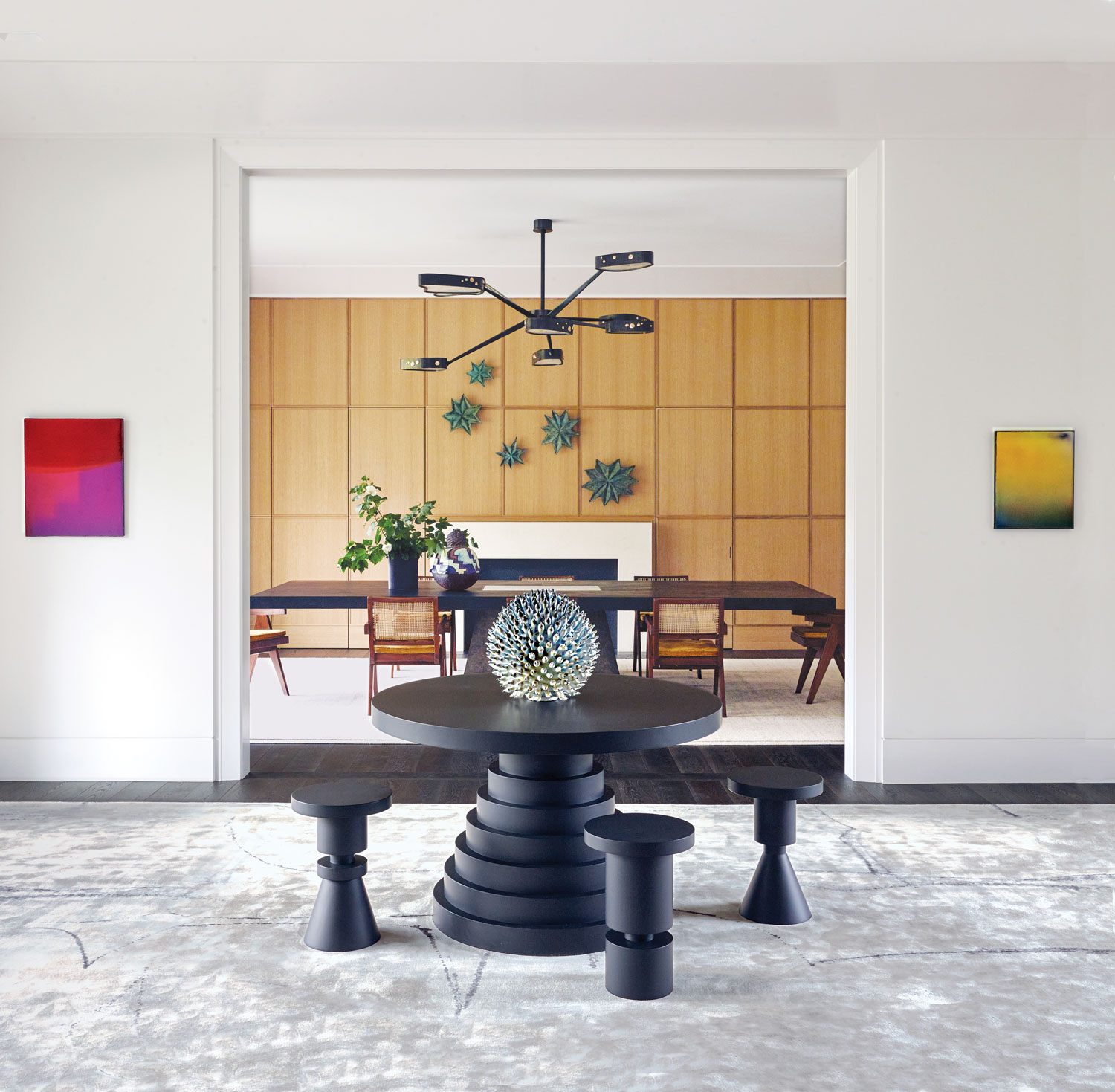 Masterminded by the Belgian-born D’Haene—whose firm, D’Apostrophe Design, conceives exalted spaces for clients in the worlds of art and fashion—the exquisitely crafted interior blends stellar midcentury designs and personality-driven contemporary pieces. Throughout, the rooms are tailored to showcase the owners’ eclectic art by luminaries such as Roni Horn, Mel Bochner, Jenny Holzer, and Sterling Ruby, who painted the small, intensely hued work that packs a petite wallop above a Vincent Dubourg “exploding” bronze credenza in the soaring entry hall.

“The owners like quality and luxury without going over the top”

The high-ceilinged living room comes invitingly down to earth, thanks to curved sofas by Christophe Delcourt, a trio of nestling India Mahdavi tables, and velvet-covered stools by the Campana Brothers. In the dining room, a massive black-plywood table by Rick Owens is surrounded by vintage Pierre Jeanneret caned teak chairs, while a tentacled Achille Salvagni chandelier engages in lively visual interplay with a Kiki Smith wall sculpture resembling a constellation. “I like simple forms and natural materials,” D’Haene explains. “It was all about what would make these rooms feel warm.” 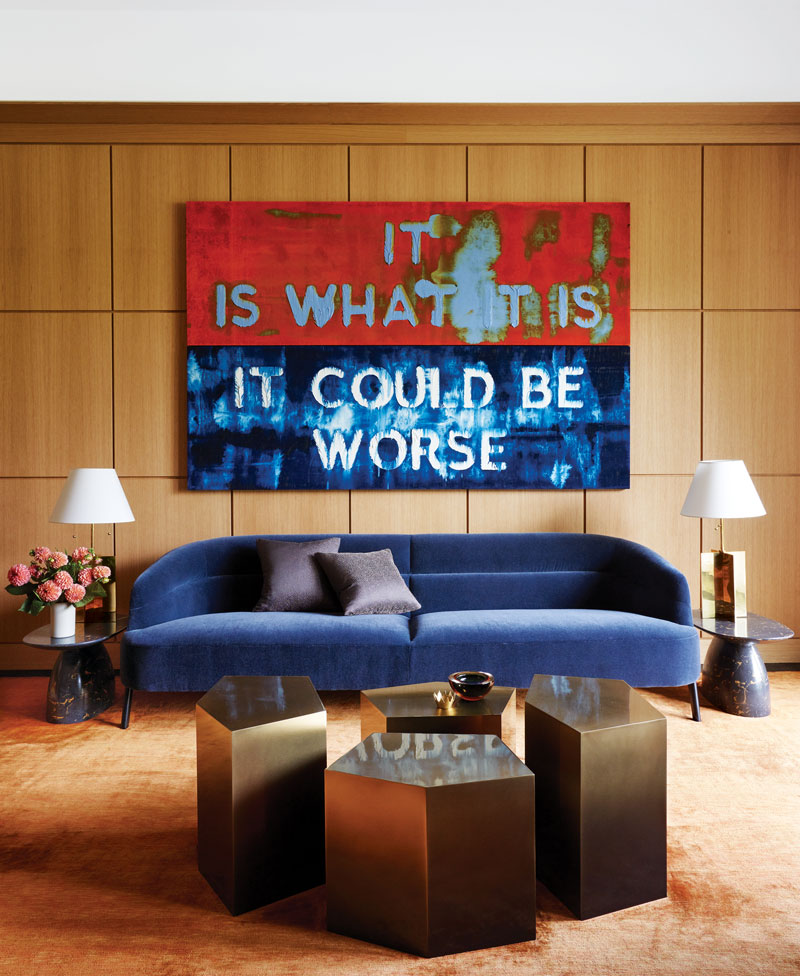 A Mel Bochner text painting adds a wry note behind the library’s Marco Dessi sofa, which is covered in a Holly Hunt fabric and flanked by Jean-Michel Frank–style lamps on Moss & Lam side tables; the bronze cluster tables are by Stéphane Parmentier from Maison Gerard, and the rug is by Joseph Carini Carpets. Photo: Richard Powers

The art on display, assembled with the help of adviser Erica Samuels, reflects the same amiable spirit. There are some brash pieces, but for the most part the works are welcoming to the eye. Polly Apfelbaum’s exuberant flower prints brighten a daughter’s bedroom. Serene works by Nan Goldin, Jacob Kassay, and John Houck offer quieter pleasures in the primary bedroom suite. “They didn’t want the feeling to be heavy or so serious,” Samuels says of her clients.

“This is not 100 percent beach house,” D’Haene says. “The owners like quality and luxury without going over the top. For them the most important thing is family. They wanted a warm home where they could spend a lot of time together.”

“There’s a sense of wander to the property” 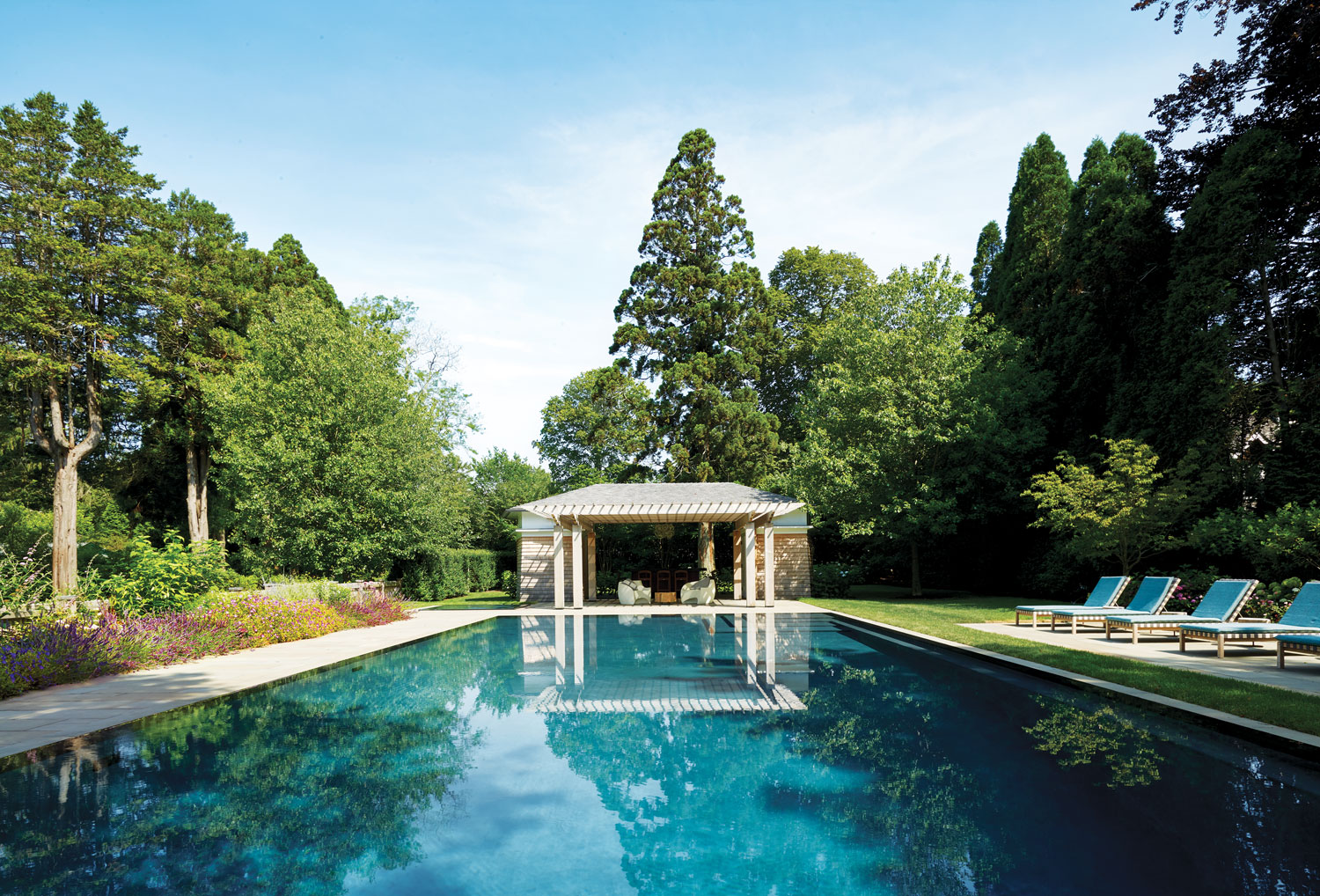 Vladimir Kagan lounge chairs from Ralph Pucci sit inside the pool pavilion, which contains a teak bar conceived by D’Apostrophe Design; teak chaise longues by Roda line one side of the pool. Photo: Richard Powers

That includes plenty of time outdoors, where Hollander approached the grounds as an opportunity to create “the rest of the composition.” Amid old conifers and copper and fern-leaf beeches as well as majestic maples and linden trees that had grown over generations, he integrated new elements, such as orchards and vegetable and cutting gardens. An allée of pleached linden trees lines a set of stairs that lean up and over a series of small hills running through the middle of the property. “The landscape had to work for a multigenerational family,” Hollander says. “Something that would invite them to use different areas, in shade and in the sun.” 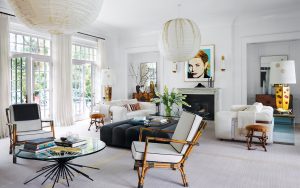 The diversity of outdoor spaces invites exploring. As Kligerman poetically puts it, “There’s a sense of wander to the property.”

A version of this article first appeared in print in our 2021 Summer Issue under the headline “Best of Both Worlds.” Subscribe to the magazine.