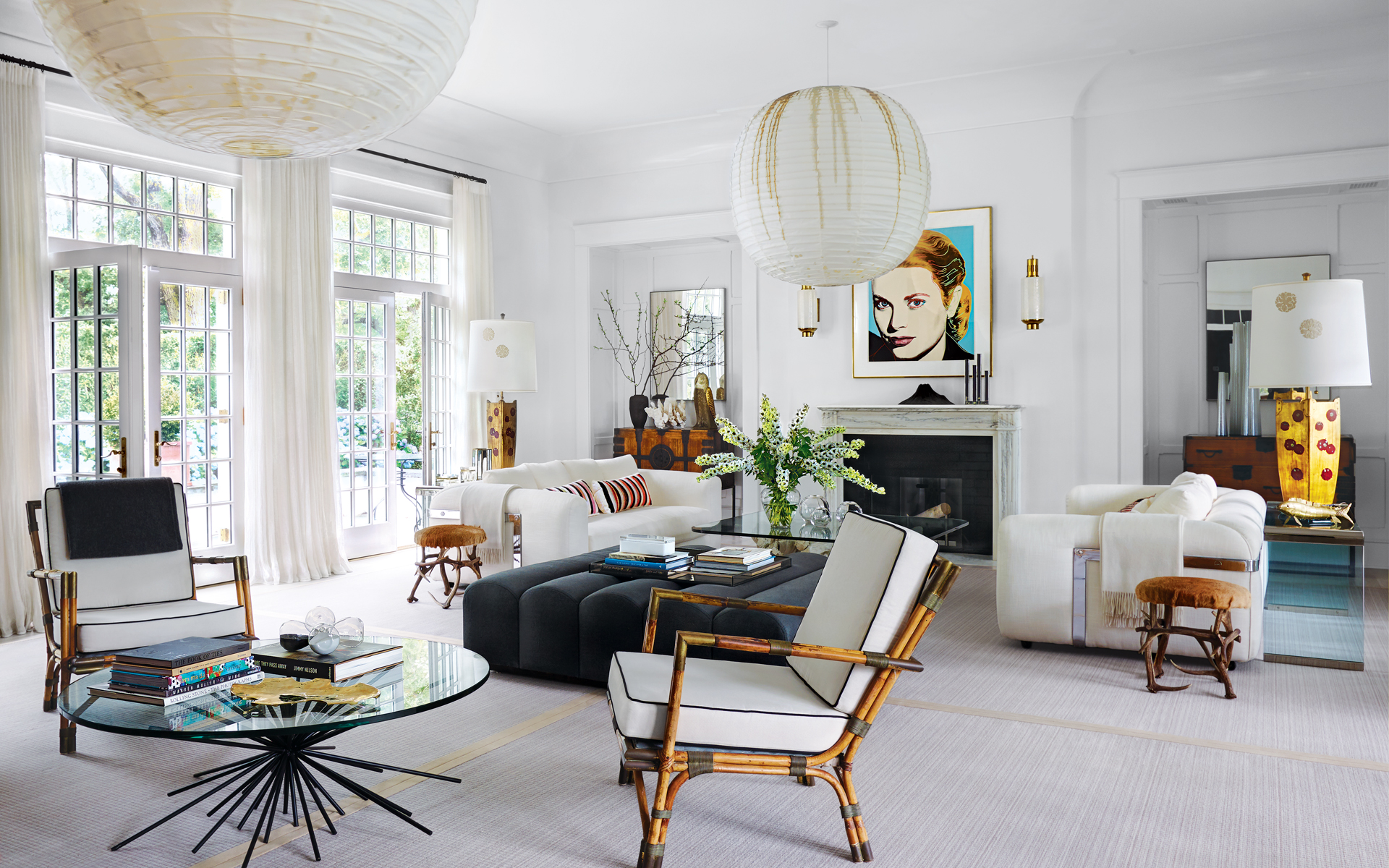 Elevated yet easygoing, mindful of tradition yet thoroughly up to date, Georgis & Mirgorodsky's refresh of a 1930s Hamptons getaway strikes just the right balance

What do a suite of offices in the iconic Seagram Building decorated with rugs in oversize spermatozoa and blood-spatter patterns have in common with a proper Upper East Side townhouse powder room paneled in bullet-shattered mirror? They both came from the creative mind of William T. Georgis, an architect and interior designer who walks a supremely tasteful line between the genteel and the transgressive, the soigné and the subversive, weaving high-impact moments of edginess into pedigreed settings.

It’s an approach he brings to even his most understated projects, including his revamp of a circa-1930s Colonial Revival home several years ago in the heart of Southampton on Long Island. Relatively modest by local standards, the five-bedroom, white-shingle home’s stately enfilade of rooms and mature gardens call to mind a backdrop for the kind of old-time WASP revelry documented by Bert Morgan or Slim Aarons. Now it’s the weekend getaway of a thoroughly modern Manhattan couple, both European-born financial professionals. 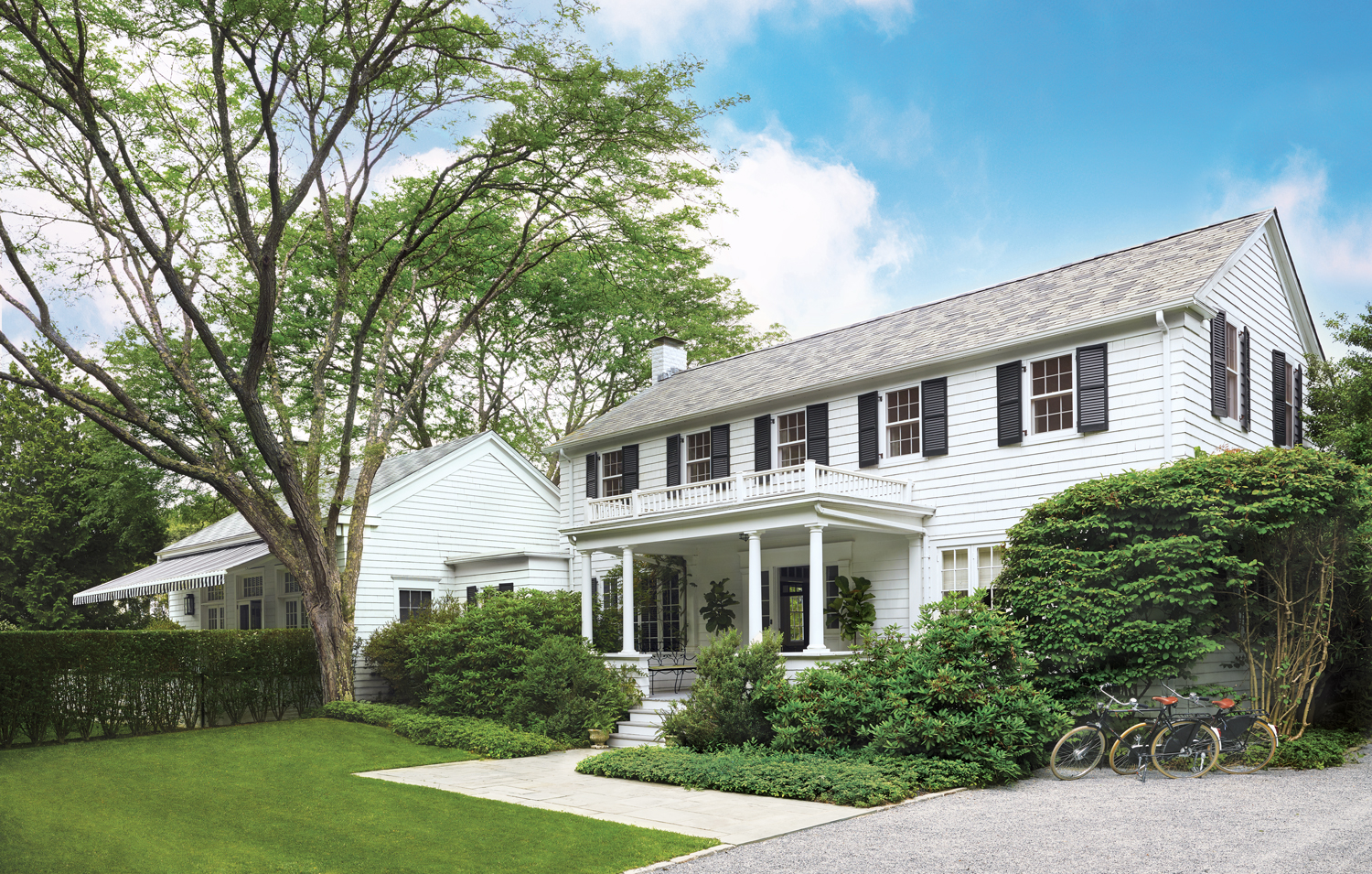 A couple commissioned architect and designer William T. Georgis to renovate the nearly century-old Colonial Revival, situated in the village of Southampton, in just a handful of months. The stand-alone living room at left was a later addition to the original structure. Photo: Richard Powers

In Georgis, the couple found a kindred spirit—educated, charming, and well traveled—perfectly suited to bringing their sophisticated tastes to life. In fact, this project went so well that they’ve since hired Georgis to do a multiyear renovation of their Park Avenue triplex as well as a recently purchased home in Palm Beach.

“The house is not precious at all, which I like. It has an easy, lived-in feeling. It’s not studied or overlabored”

In Southampton, speed was a big priority for the clients, and the architectural alterations were kept modest: crafting up-to-date baths, adding a shaded terrace off the living room—itself an addition to the original structure. The house came with a few “gifts with purchase,” including a piano, a Savonarola chair, and a classic Mies van der Rohe chaise, originally upholstered in beige leatherette but now sporting a crisp pink linen. “It was fun, like a chess game,” says Georgis of integrating these inherited objects. 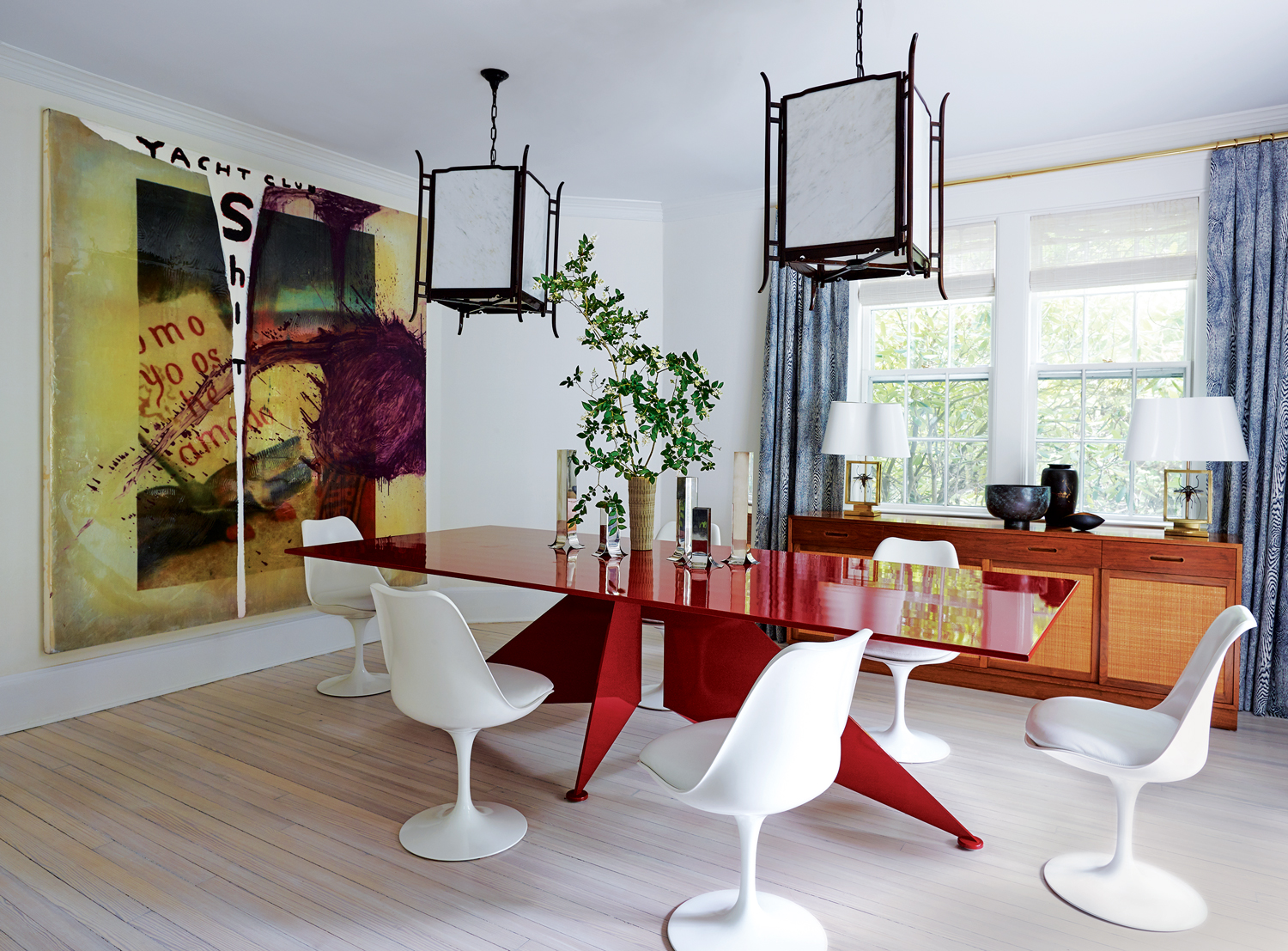 Creating a sophisticated mix of styles and textures in the dining room, Georgis installed 19th-century Chinese lanterns fashioned of rosewood and marble above the custom-made table in powder-coated steel and Eero Saarinen chairs with a fiberglass seat; curtains in a wood-grain-pattern fabric by Brunschwig & Fils frame the vintage Edward Wormley sideboard, and the painting is by Julian Schnabel. Photo: Richard Powers

Although the work was done over just a few months, Georgis was still able to weave in the kind of elevated, bespoke details that enliven his more time-intensive projects. The dining room’s custom cherry-red table features a base of steel plates reminiscent of an Alexander Calder sculpture. The primary bedroom sports a custom Portuguese needlepoint rug and a coverlet made from vintage Venetian silk velvet commissioned by an adoring owner to mimic the coat of his pet beagle. The winsome guest bedroom features an ivy-print rug and a desk that the European-born client toted from Germany to Oxford to Manhattan and now Southampton, where it has anchored his work-from-home setup for the past year. 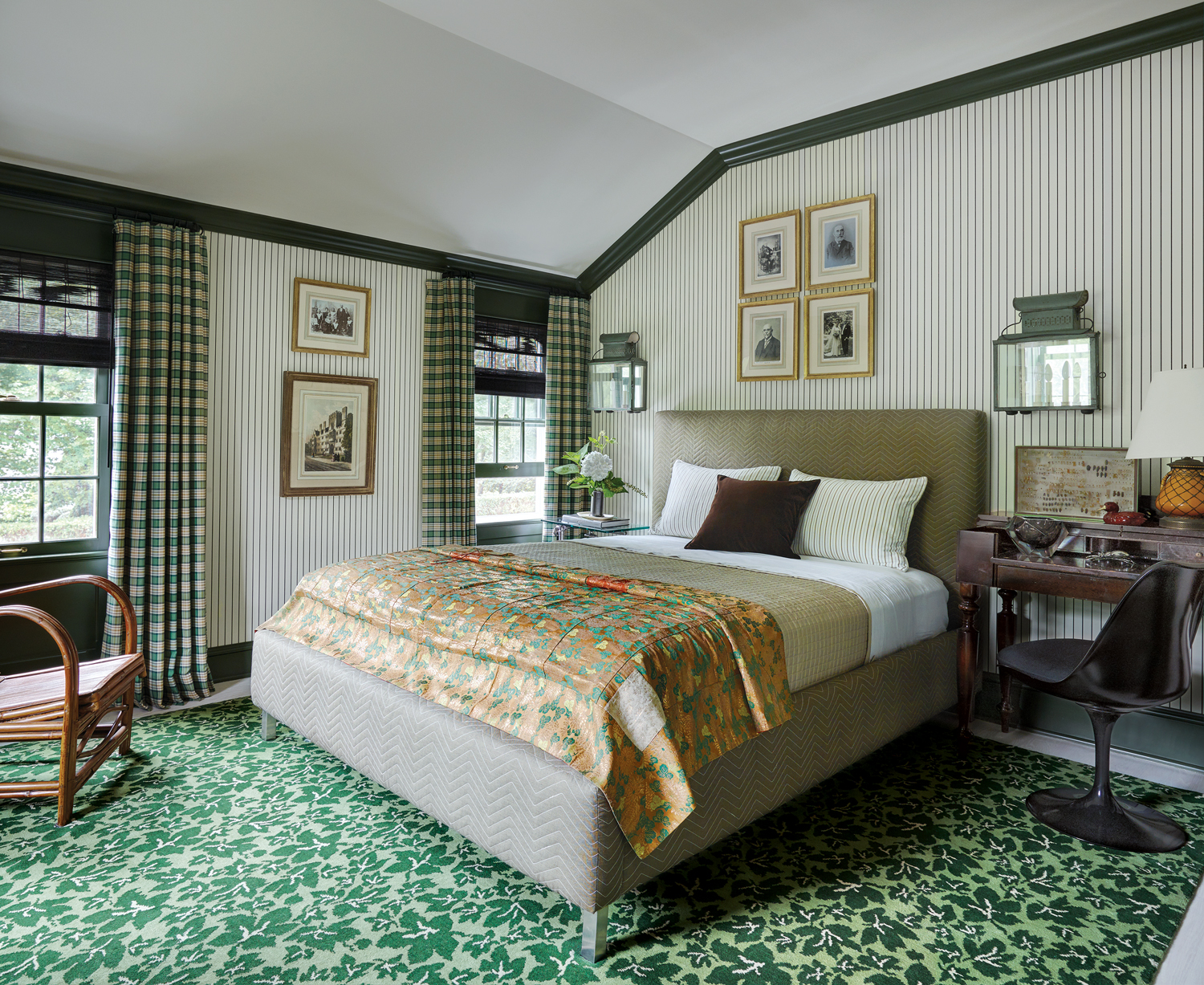 In a guest room, a Hinson stripe serves as the backdrop for family portraits; Georgis & Mirgorodsky designed the bed, which is upholstered in Frette fabric and draped with a coverlet made from an antique Japanese monk’s robe, while the curtains are of a Kravet fabric and the rug is by Stark. Photo: Richard Powers 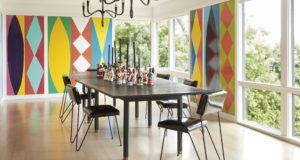 Naturally, a new home calls for new art, including pieces by Andy Warhol, Ed Ruscha, and Marilyn Minter. The couple also acquired several works directly from Julian Schnabel, who has ties to the Hamptons. One of his “Des + Gina” paintings hangs in the entry hall, while another large canvas presiding over the dining room is provocatively scrawled with the words “Yacht Club Shit.” Mixed among the blue-chip art are portrait photographs of the husband’s family spanning many generations.

The homeowner reports that friends with weekend homes nearby, “even those with larger, fancier houses, some also designed by Bill Georgis, all say ours is just perfect.” Adds Georgis, “The house is not precious at all, which I like. It has an easy, lived-in feeling. It’s not studied or overlabored.” 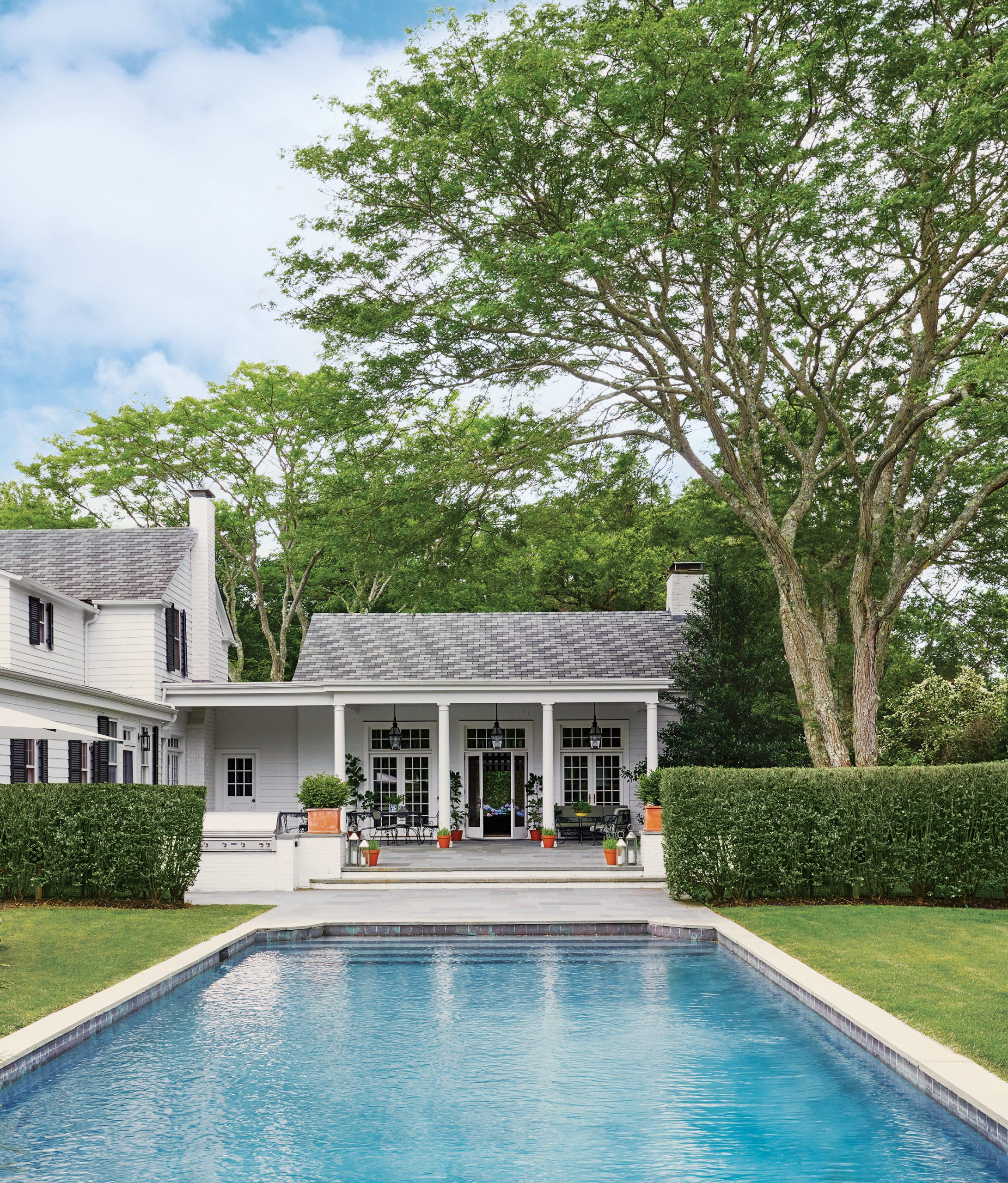 Georgis added a covered terrace at the back of the house, overlooking the pool. Photo: Richard Powers

In other words, this home was not Georgis in his full maximalist glory. And that was the intention. “It’s fun not being so serious,” the designer says. “This wasn’t our typical project in that it was put together quickly and on a budget. But it captures the couple’s sensibility and point of view.”

The client agrees. Working within their parameters, he says, “Bill really just hit all the right notes.”

A version of this article first appeared in print in our 2021 Summer Issue under the headline “Happy Medium.” Subscribe to the magazine. 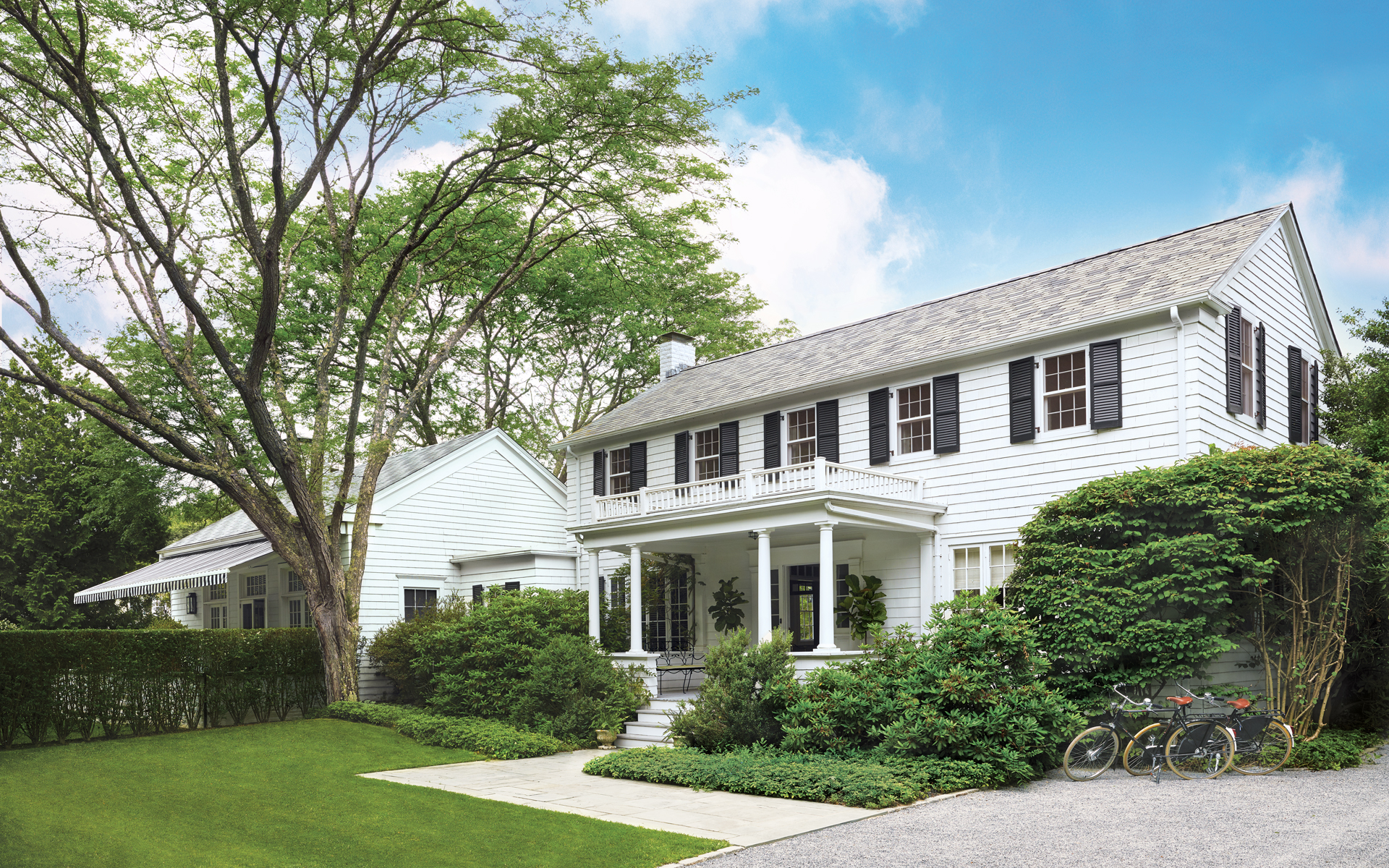