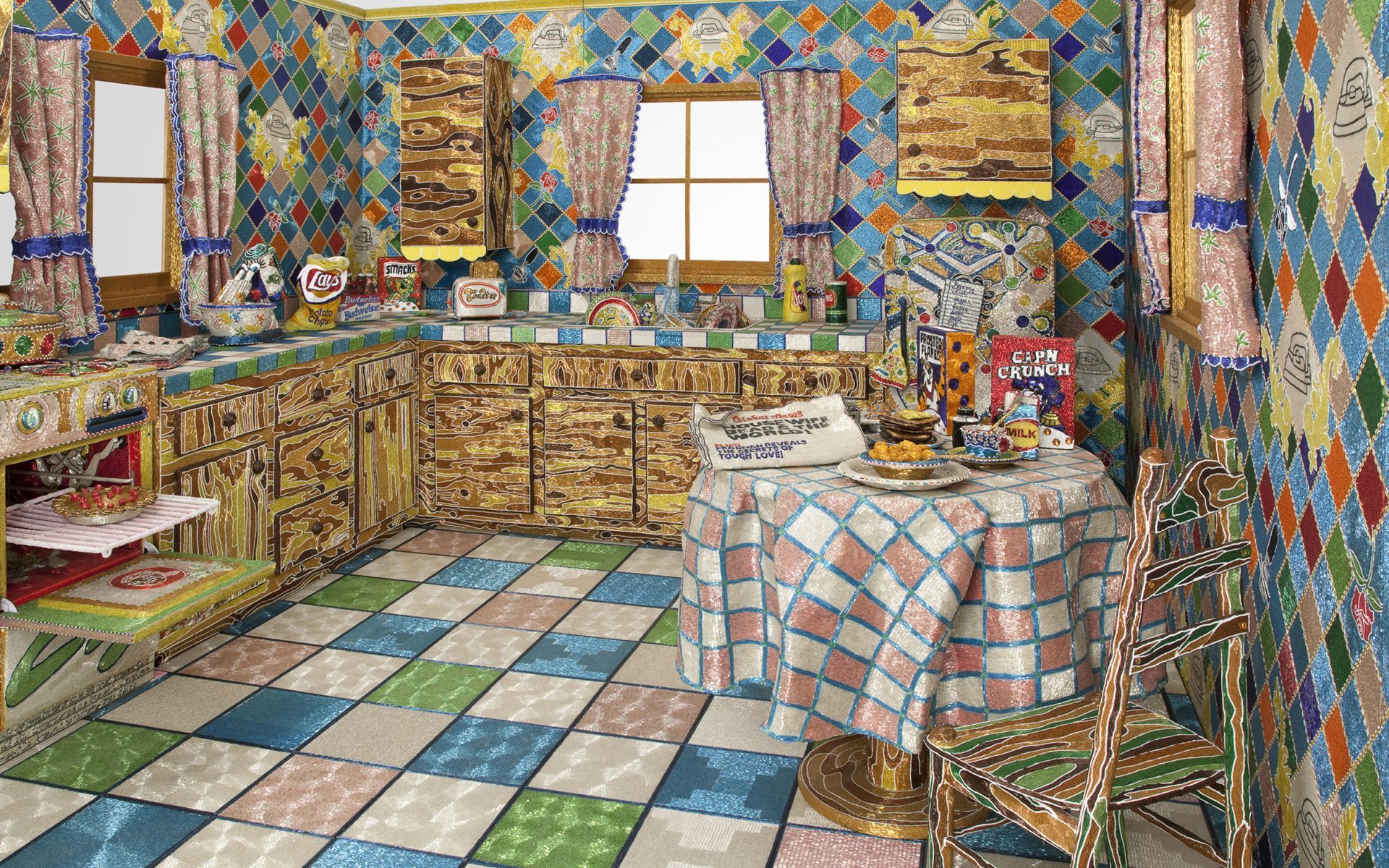 See incredible fiber and textile works by Claes Oldenburg, Anni Albers, and Sophia Narrett in museum exhibitions before they close

A creative pursuit that’s become a game-changer for artists and a hot-topic with collectors over the past several years, craft was once scorned as the pastime of hobbyists and housewives. In the hands of the highly imaginative, however, it’s led to enchanting and thought-provoking artworks. Here, Galerie looks at three New York museums that are delving into their collections and surveying the country to create exhibitions that explore the impact of materiality on the current art scene. Drawing on works from the Whitney’s collection, along with nine loans from Whitney trustee Beth Rudin DeWoody and several new acquisitions, Whitney curators Jennie Goldstein and Elisabeth Sherman have assembled a compelling argument for the importance of craft in contemporary art over the past 70 years. “There is no one opinion about the topic of craft and how it’s used, how it’s displayed, and how it’s framed,” Sherman shared at a press luncheon in late November.

Featuring over 80 works in a variety of media by more than 60 artists, this diverse exhibition focuses on experimentation with materials rather than conventional craft practices. The earliest work in the show is Robert Rauschenberg’s 1954 red and yellow striped abstraction on a canvas collaged with fabric and newspaper. It’s grouped with a dynamic Ruth Asawa hanging lobed sculpture intricately woven from brass and steel wire and Peter Voulkos’s bulky, expressively painted and glazed clay sculpture.

Different periods of contemporary art are convincingly represented in the show, with Claes Oldenburg’s giant bacon, lettuce, and tomato sandwich—made from vinyl, fiber, and painted wood—epitomizing Pop Art; Eva Hesse’s suspended network of latex covered ropes and string standing in for Minimalism; and Miriam Schapiro’s lively acrylic and fabric collaged canvas pegged to the Pattern & Decoration and Feminist Art movements of the 1970s. Moving into the 1980s and ‘90s, when Postmodernism made anything possible, Mike Kelley’s accumulation of sewn together stuffed animals and afghans paired with a side table that’s stacked with kitschy melting candles is a powerful parody of hippie folk art. Equally ironic, Liza Lou’s beaded kitchen installation, which took her five years to make, draws parallels between the obsessive, time-consuming nature of craftwork to the task-repeating aspect of maintaining a household, aka women’s work—or at least that how it’s envisioned in Lou’s colorful critique.

Nick Cave’s beaded and sequenced, costume-like Sound Suit #20 (2005) and Jeffrey Gibson’s figurative beaded and copper jingled Birds of a Feather (2017)—both sculptures from DeWoody’s collection—bring the overview into contemporary times through issues of identity, while a final gallery filled with ceramics, including Sterling Ruby’s giant, glazed ashtray-like basin stuffed with shards of his failed fired works, show how malleable the medium has become in the boundary-breaking hands of today’s artists. MoMA takes the marginalization of weaving as “women’s work” as the point of departure for a textile-based group exhibition. Although the earliest work in the show is a 6th-8th century Coptic tapestry, which was oddly the first design object acquired by the museum in 1934, it’s the Bauhaus and Russian Constructivism that informs many of the works on view. There are 17 Anni Albers drawings, prints, tapestries, and fabric samples in the show, along with the artist’s hand-operated loom, which is one of the few displayed objects not in MoMA’s comprehensive collection.

While nine of Albers’s screenprints, which reference a variety of her textiles designs, line a wall of an outer entryway, where one of the prints has been animated as the projection of a looping line, a rarer 1948 tapestry (made when she was teaching at Black Mountain College) is presented with a group of gouache and pencil designs for wall hangings and a fabric sample for a tablecloth in the show’s main gallery. The plaid-like designs—illustrating the repetition and development of a theme—look completely contemporary, which may explain why her work is being reevaluated in our time. Equally rare and just as compelling are a 1924 geometric textile wall hanging and the working drawing for it by Gunta Stölzl, who was head of the Bauhaus’s weaving workshop. The black-and-white patterning draws on the architectural forms of the building that housed the workshop. An abstract wall hanging of the same period by Benita Koch-Otte references both architecture and music in the way it simultaneously resembles the frieze of a building with windows below and notes rhythmically bouncing across a lined sheet.

Seemingly as much at home in MoMA’s painting and sculpture department as they are in its architectural and design realm, Le Corbusier’s large-scale tapestry of performing musicians charismatically captures the Jazz Age, the era in which it was created, while Magdalena Abakanowicz’s sisal wall sculpture and Aurèlia Muñoz’s hanging macramé structure reflect the feminist impact on fiber arts in the radical 1960s and ‘70s.

When asked by Galerie why this show was selected to be one of the newly renovated museum’s opening exhibitions, curator Juliet Kinchen, who organized it with assistant curator Andrew Gardner, said, “One of the things we want to do is to move between the integrated displays of the main galleries and do a deep dive into the more medium specific areas of the collection, while cutting across periods in a lucid way.” And it’s a goal this show fascinatingly achieves.

Established to encourage growth and experimentation among a new generation of artists who are advancing the craft disciplines, the Burke Prize is an unrestricted award of $50,000 given to an artist age 45 or under working in the mediums of glass, fiber, clay, metal, or wood. Now in its second year, the prize is accompanied by an exhibition of the winner and 15 finalists, who have been selected by a jury of professionals in the fields of art, craft, and design.

Coincidentally, this year’s Burke Prize winner—artist and poet Indira Allegra—used a loom, which is a central object in the MoMA show, as the point of departure for her split-screen performance videos, where she engages the language of weaving through dance, and her simple yet visually poetic sculptures, which deconstruct the timeless fabric-making machine, which Allegra sadly sees as an object of women’s oppression. Installation view of Burke Prize 2019 at the Museum of Arts and Design, New York (through April 12, 2020). Photo: Jenna Bascom

Perfectly chosen from a pool of some 500 applicants, the other artists in the show also employ craft techniques to highly imaginative ends. Trained as a metalsmith, Jayden Moore melds together found and altered silver platters to make a striking montage of historical elements, while Elizabeth Alexander cuts up appropriated wallpaper and collages the decorative bits into pictures and objects that reflect the deterioration of domestic living. Taking raw materials and crafting them into something completely new, Sophia Narrett, who was trained as a painter, embroiders organically shaped storyboards that erotically reference pop culture, reality TV, and the Internet; Linda Lopez creates candy-colored ceramic sculptures that she laboriously constructs from scores of tiny hand-shaped plant- and rock-like elements; and jewelry design and performance artist Lauren Kalman takes viewers further into the realm of fantasy with her exquisitely crafted golden head piece, which torturously covers the head in a medieval chain mail mask, and grotesque nose-ring, that simulates droplets of golden snot dripping from the nostrils, as witnessed in her accompanying photographic self-portraits.

Summing up the artists and work in Burke Prize 2019, MAD curator Samantha De Tillio, who co-organized the show with her colleague Angelik Vizcarrondo-Laboy, told Galerie, “We’re not attempting to preserve the studio craft movement, but we are trying to show the legacy of that movement and the forward trajectory of artists who are working with those materials—whether they come from a craft background or they come to craft from a different background and are interested in what these materials can do for their narratives, for their concepts, and for their practices.”

Cover: Liza Lou, Kitchen, 1991-96.
Photo: Tom Powel, Courtesy of the artist and the Whitney Museum of American Art
Next Post