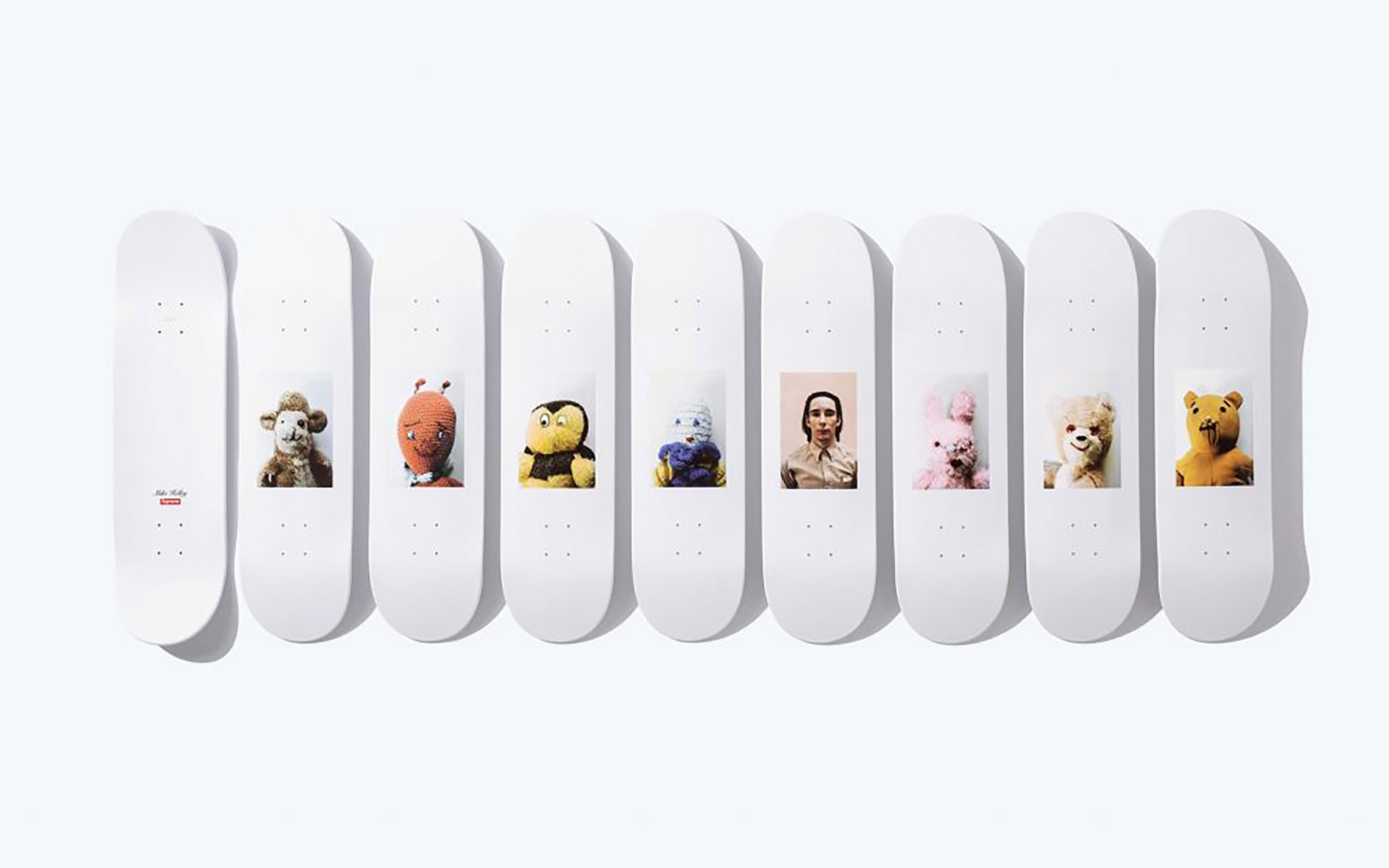 A series of recent collaborations have taken famous works of art and emblazoned them on everything from headboards to slip-on sneakers. The latest of these art and fashion crossovers is from Supreme, which launched a collection today that features the work of the late visual artist Mike Kelley.

Throughout his career, Kelley utilized a variety of mediums, among them performance, sculpture, and found objects including stuffed animals. His pivotal works featuring the plush toys, More Love Hours Than Can Ever Be Repaid and his most recognizable work, Ahh . . . Youth! (immortalized on the cover of the 1992 Sonic Youth album Dirty), are featured prominently in the new collection, printed on T-shirts, hoodies, button-up shirts, jackets, and skateboards. Kelley’s work often commented on middle-class consumerism, so there’s an appropriate symmetry to seeing images of his discarded plush toys stamped on work jackets and streetwear. A shirt printed with Kelley’s *More Love Hours Than Can Ever Be Repaid,* largely considered his masterpiece. Photo: Supreme

Born in Michigan in 1954, Kelley was a prominent member of the Detroit punk music scene, even founding the experimental group Destroy All Monsters, before he decamped to Los Angeles and became an artist. When Kelley died in 2012 at age 57, the New York Times called him “one of the most influential American artists of the past quarter century and a pungent commentator on American class, popular culture, and youthful rebellion.”

Supreme’s collaboration also includes a selection of Kelley’s “Reconstructed History” series, a collection of historical images that have been drawn over with lewd additions, much like a high school student might scribble in a textbook. The pieces used in the collection include Franklin Signing the Treaty of Alliance with the French Officials, The Empire State Building, and Hiding from Indians. A hoodie printed with an image from Kelley’s “Reconstructed History” series. Photo: Supreme

Supreme has previously done collaborations with contemporary artists like Nan Goldin, Jeff Koons, Larry Clark, Damien Hirst, George Condo, Andres Serrano, and Cindy Sherman. The collection was made in association with the Mike Kelley Foundation and is available now online and in Supreme’s stores in New York, London, and Paris.