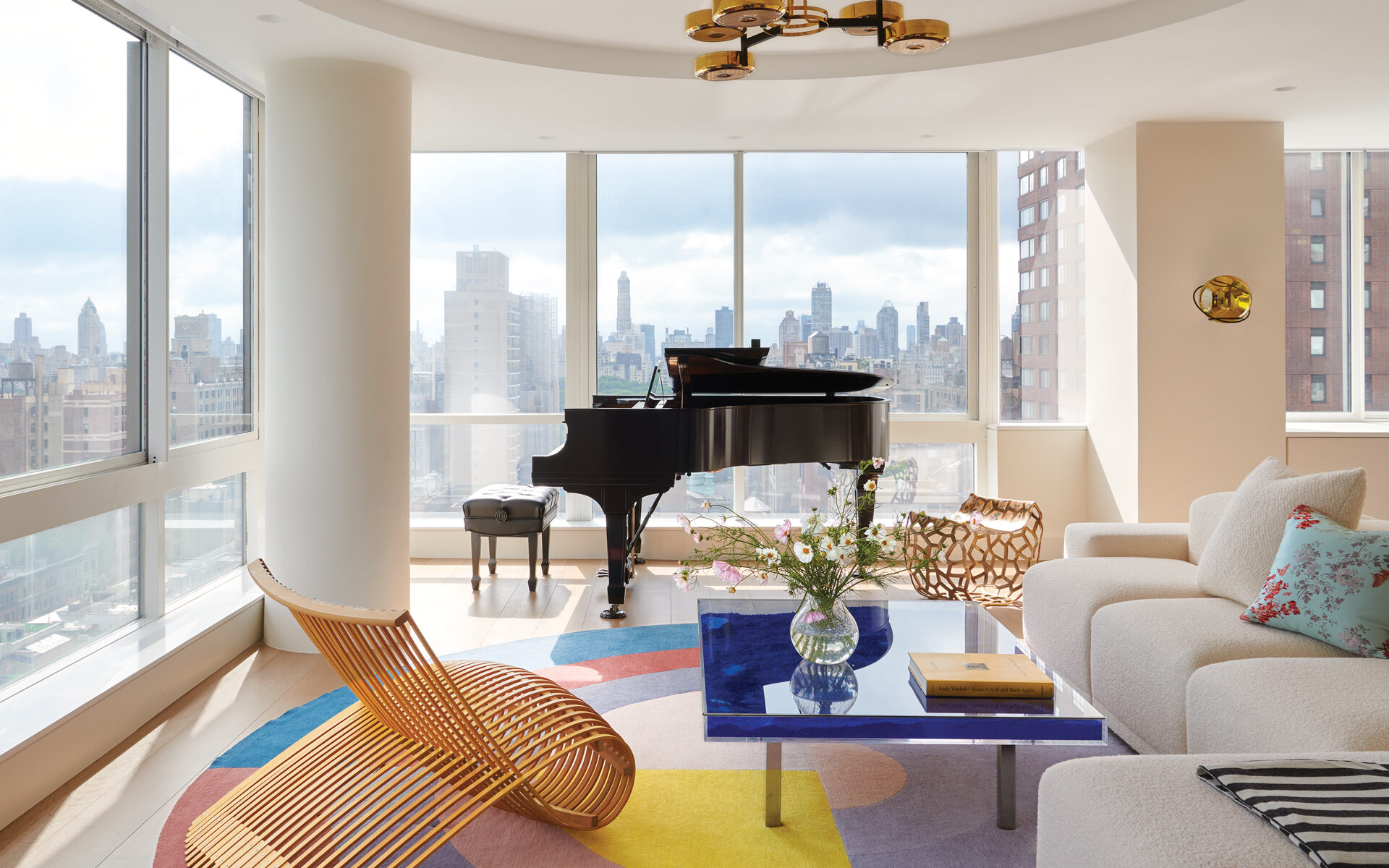 An Yves Klein cocktail table, a Marc Newson chair, and a David Wiseman stool atop a colorful rug by Patterson Flynn create an artful moment in the living room.
Photo: JASON SCHMIDT 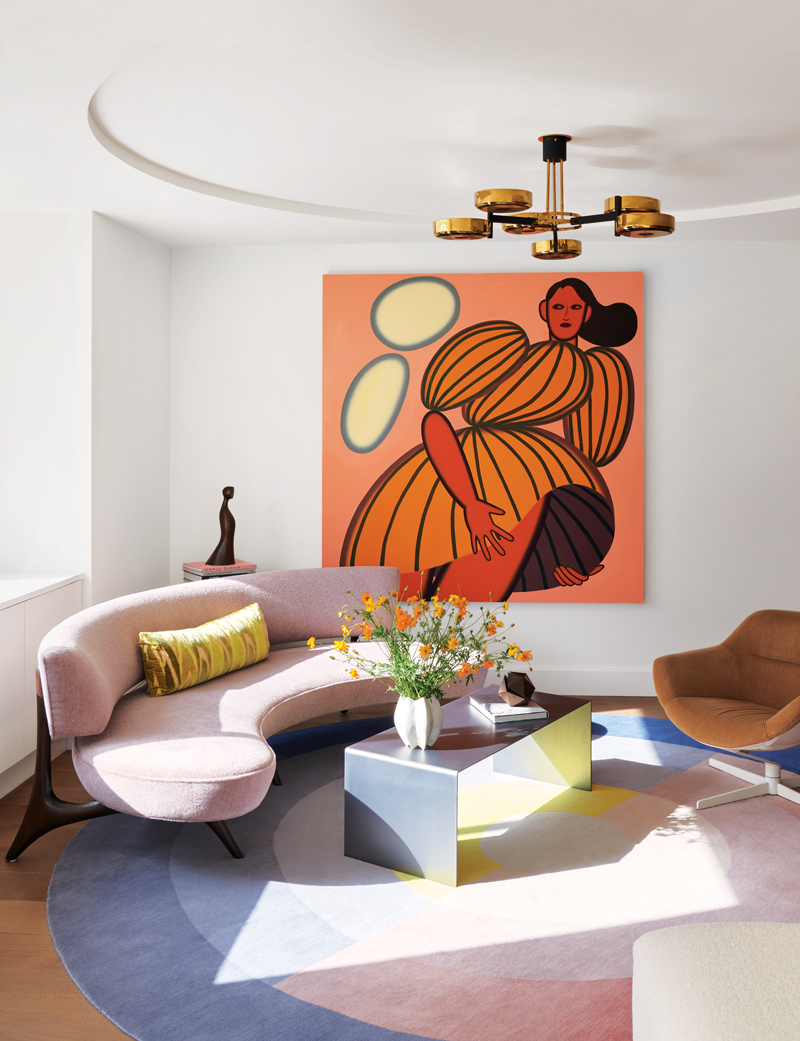 Sometimes the designer-client relationship moves beyond a single project, becoming instead a journey. For an art-collecting couple and their three children, Kimille Taylor first designed a comfortably contemporary New York apartment and then returned several years later, after the clients bought a two-bedroom unit next door, to join the spaces seamlessly.

When purchasing the original apartment, the couple liked its size and the building’s modern glass architecture. What they did not like, however, were the existing rooms, which the wife called “all wainscoting and pictures of horses, the opposite of what we wanted. Kimille helped us bring the space to life with a much more contemporary vision.” Adding the second unit allowed Taylor, working with the New York firm Eric Sheffield Architect, to introduce two bedrooms and a family area complete with a ping-pong table for the kids while rethinking the remaining floor plan, including turning two of the children’s former rooms into offices for their parents. The renovation also involved moving the dining room into a newly opened-up area adjacent to the kitchen. Additionally, Taylor created a kitchenette off the entry, with coral pink cabinets and big doors with black-and-white fins. As the designer says of the apartment, “I like a happy interior. The colors are layered and subtle—adding to the joy of this place.” 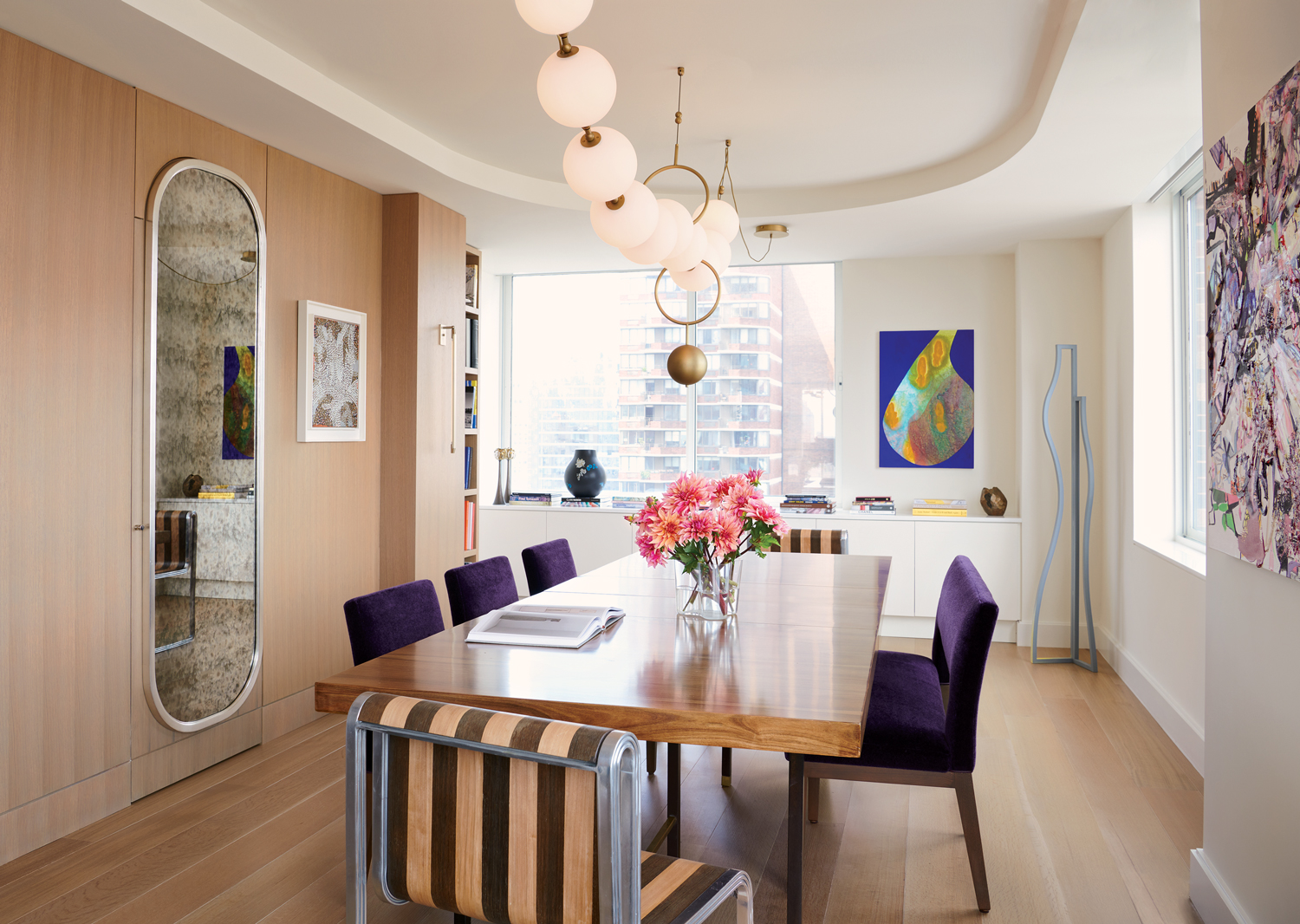 The open living room, which is now larger, consists of two spaces—each with a Taylor-designed, circular “pop out” in the ceiling—united by a freestanding, two-sided sofa. The white bouclé-covered custom piece was Taylor’s response to the wife’s wish for something contemporary and comfortable. It blends equally well with the bright-blue Yves Klein cocktail table and the pink Vladimir Kagan sofa. In the center of the room, a glass sculpture by Olafur Eliasson gleams on the wall. The clients, both of whom have loved art since they were young, have a singular passion, the wife says, for “supporting emerging artists, particularly New York City women.” Consulting with art adviser Jennifer Weissbach, they found works such as Grace Weaver’s colorful painting Affront, which has pride of place in the main living area.

“I like a happy interior. The colors are layered and subtle—adding to the joy of this place” 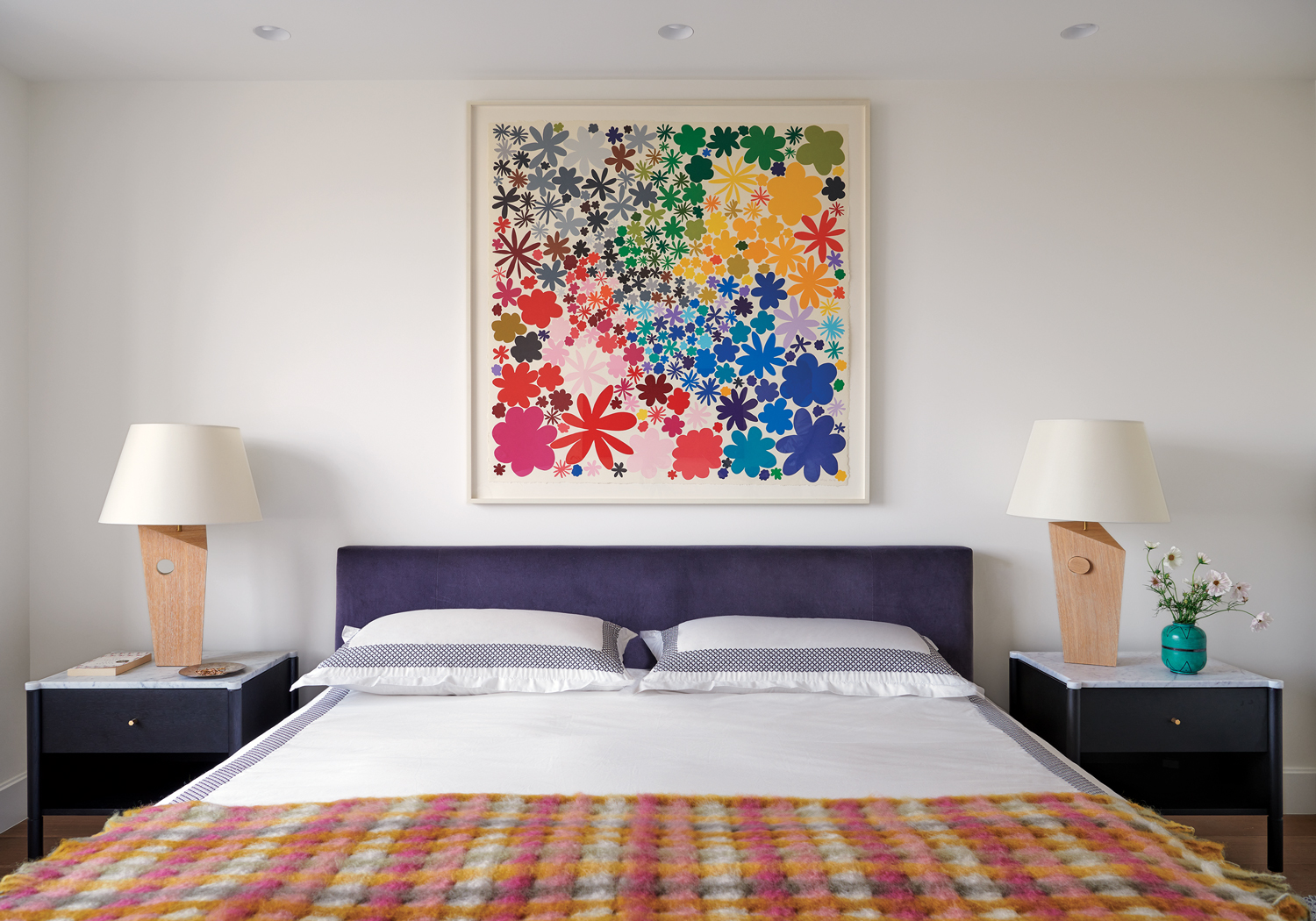 In the main bedroom, Polly Apfelbaum’s Lover’s Leap 13(2007) is displayed above the bed. Photo: JASON SCHMIDT

The dining room is lined with abstract art by other female talents, such as paintings by Carrie Moyer and Claire Falkenstein, while a fanciful ceiling light by Larose Guyon, which Taylor likens to a string of pearls, illuminates the Harvey Probber table. In the open kitchen, a painting by Mel Bochner is on display.

The wife’s relaxed, elegant office strikes a playful tone with a lavender resin lamp by Sabine Marcelis and an A. J. Bocchino wallpaper of New York Times headlines, color-coded by subject, that the wife calls “a genius selection” by Taylor. Nearby, a column of works by Anne Collier, Cindy Sherman, Marilyn Minter, Laurie Simmons, and Jack Pierson comprise a portfolio that was purchased from a nonprofit that supports arts and creative programming for public schools. The chance to buy photographs by so many noted artists was “too good to pass up,” the wife says, observing that they are “much moodier” than the rest of their collection. 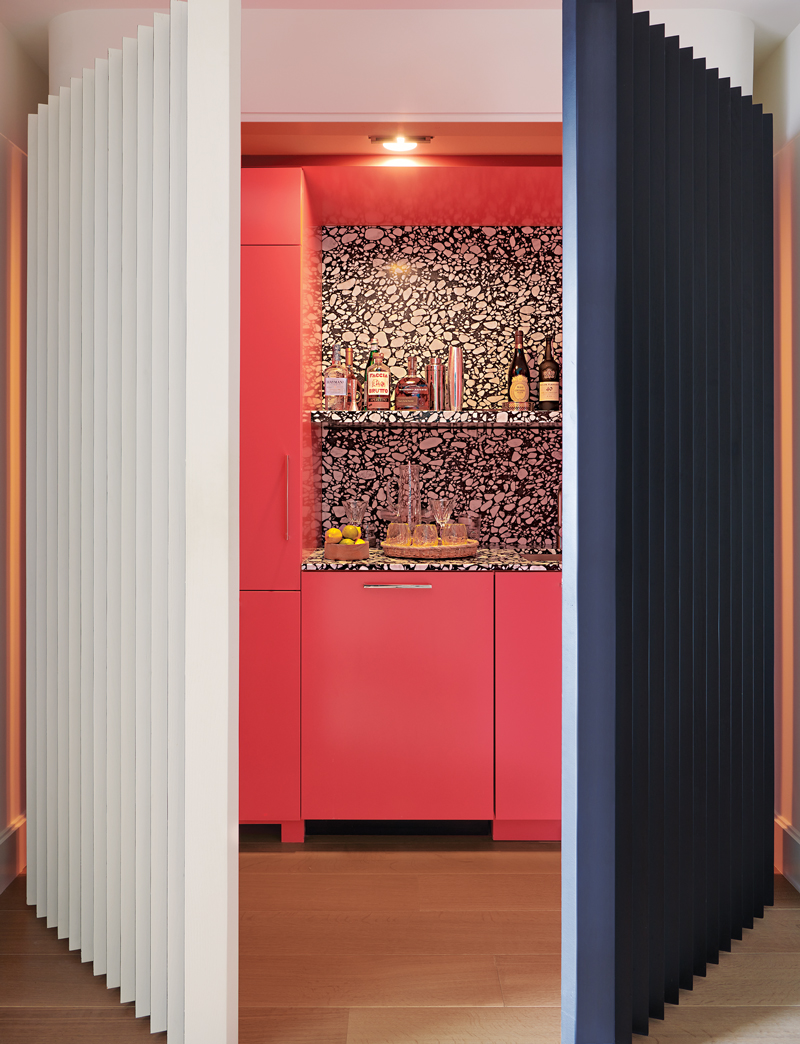 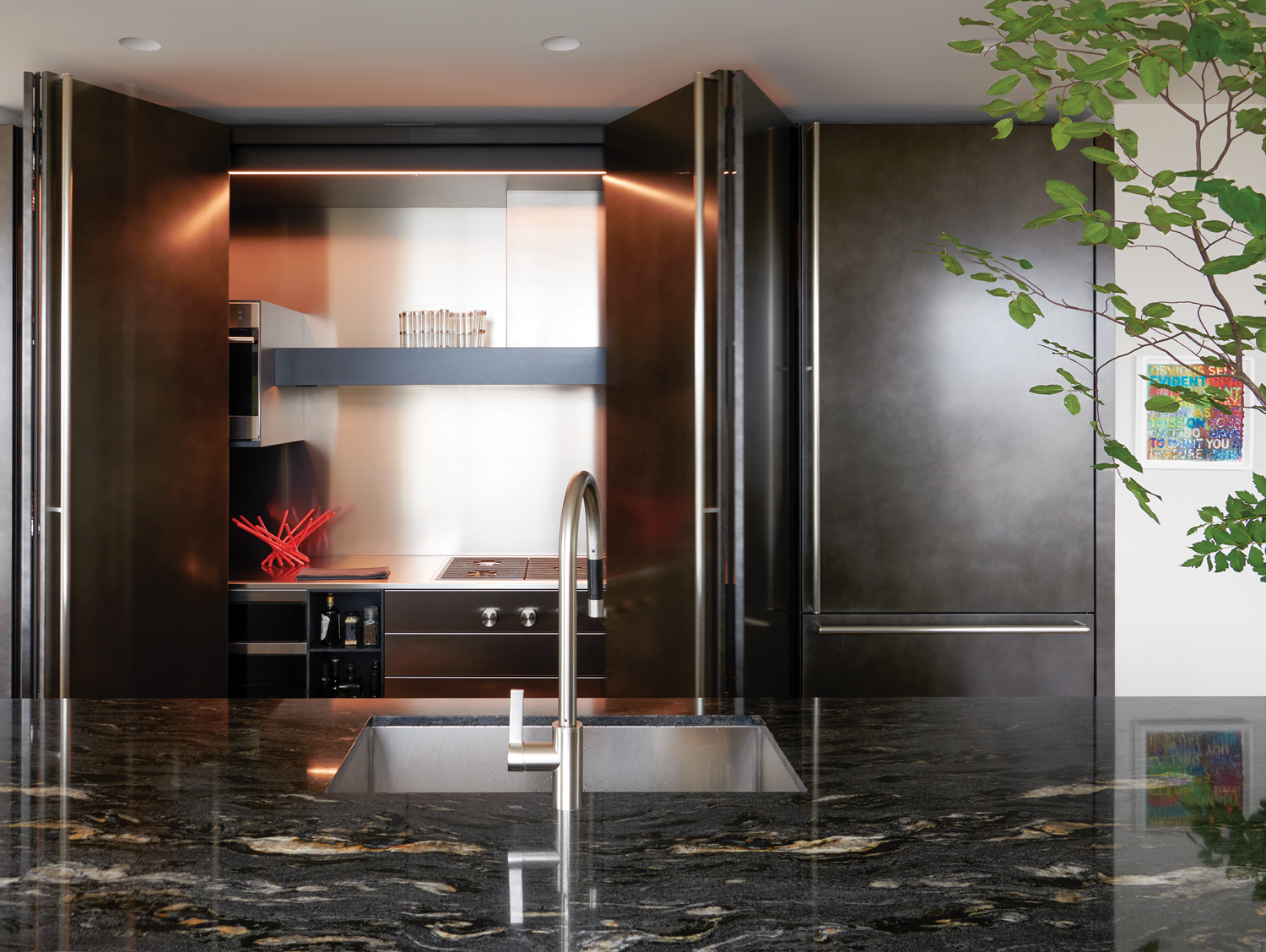 The kitchen features a Wolf range; the sink fittings are by Dornbracht. Photo: JASON SCHMIDT

The primary bedroom showcases female talents, too. Here, Polly Apfelbaum’s colorful print Lover’s Leap 13 hangs above the bed, which is flanked by lamps from Taylor’s own line. The cerused-oak fixtures sit on bedside tables by Egg Collective. The apartment’s blend of liveliness and serenity reflects the happy collaboration between the clients and decorator. “We do love how thoughtfully Kimille designed it,” says the wife, who suggested adding green tiles in a random pattern to the powder room. “That’s an example of our collaboration,” says Taylor. “The apartment is really an expression of them.” 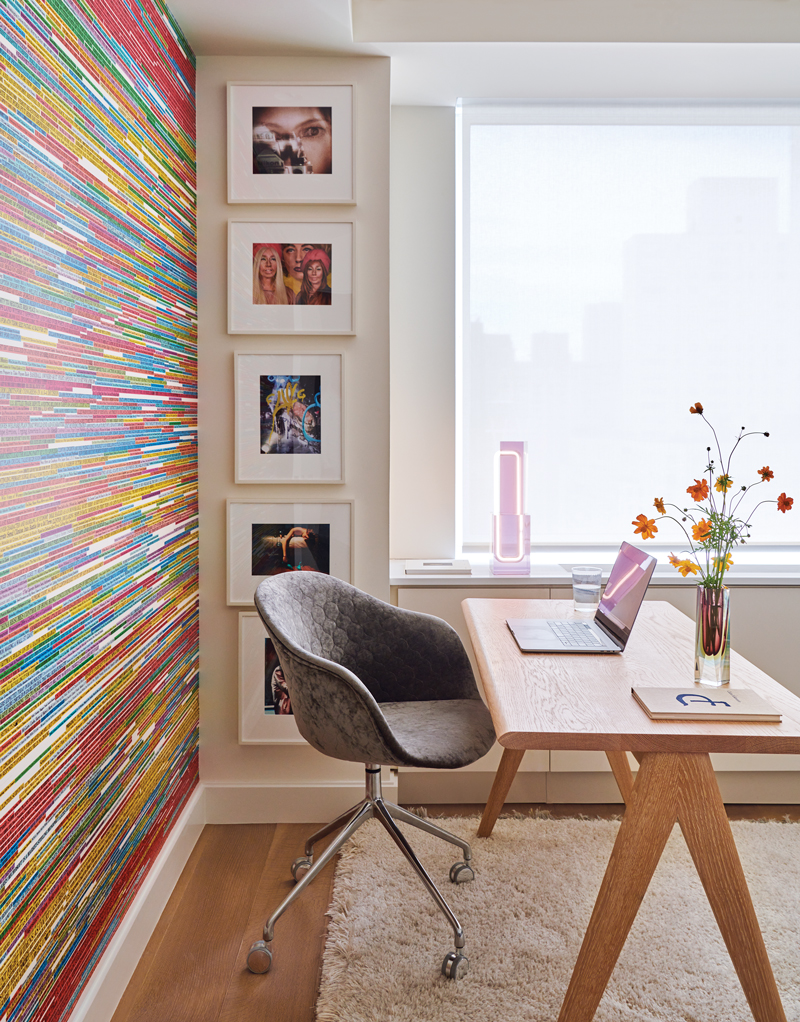 A version of this article first appeared in print in our 2022 Spring Issue under the headline “Points of View.” Subscribe to the magazine.

Cover: An Yves Klein cocktail table, a Marc Newson chair, and a David Wiseman stool atop a colorful rug by Patterson Flynn create an artful moment in the living room.
Photo: JASON SCHMIDT
Next Post