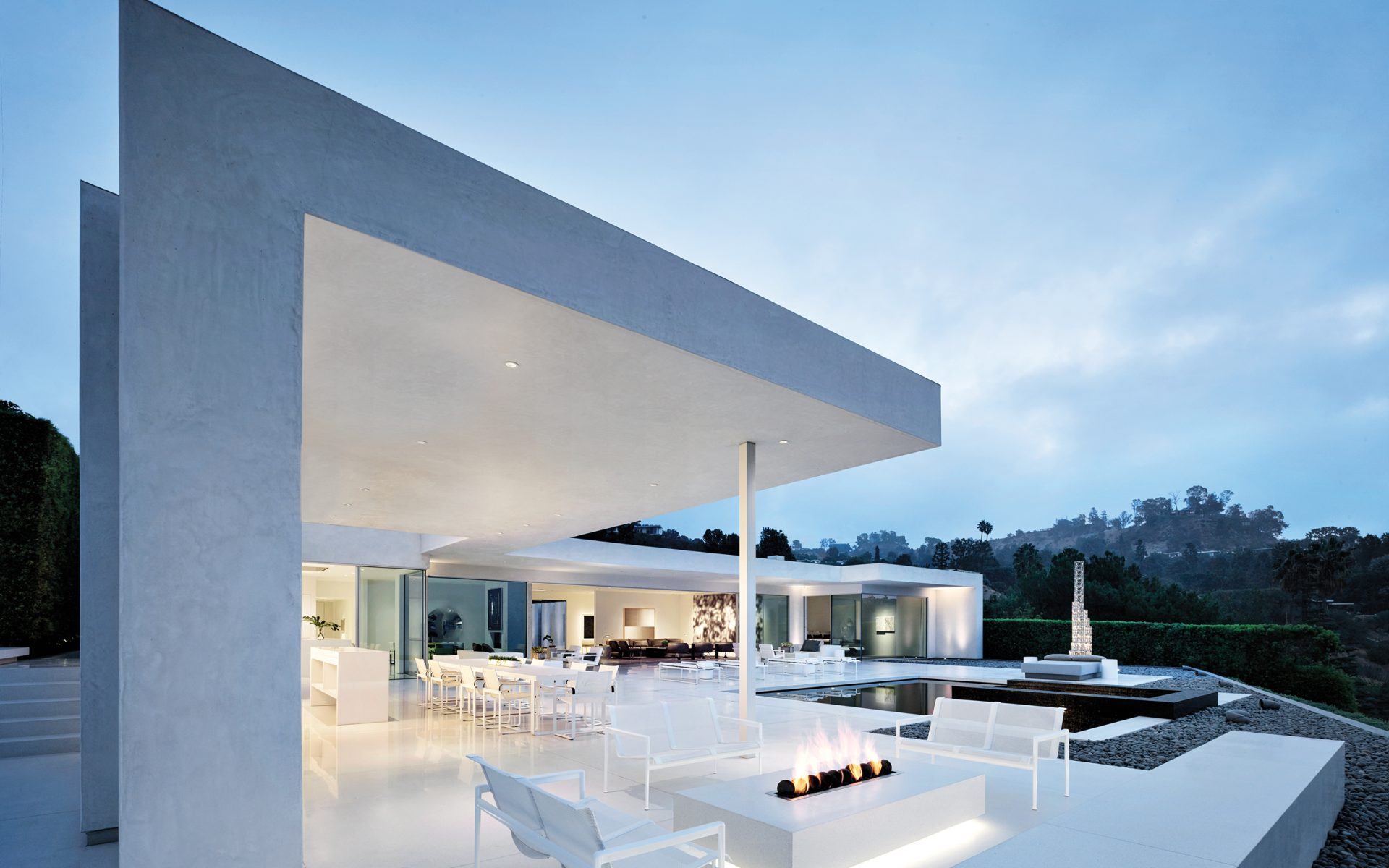 “My mom never threw anything away—she was essentially a hoarder,” recounts G. T. Dave, founder of the billion-dollar kombucha empire GT’s Living Foods. The youngest of three brothers, Dave was raised in a modest Bel Air, California, home, which, he says, had an East-meets-West vibe and was utterly filled with tchotchkes. Though his parents were both vegans who followed the teachings of the spiritual adviser Sathya Sai Baba, their sensibilities couldn’t have been more different. His father, an attorney and accountant, was a minimalist who prized quality over quantity, while his mother, a bon vivant jeweler, believed in the bounty of thrift and regularly indulged her sons with splurges at Pick ’n Save.

Looking around the arrestingly spare, immaculately white compound Dave has created high up in the Trousdale Estates section of Beverly Hills, it seems safe to conclude that he inherited his father’s taste. But the passionate acquisitiveness with which the entrepreneur approaches his impressive art collection hints at the influence of his mother, whom he calls his “bosom buddy.” (It was her success with kombucha during a battle with cancer that prompted him to start his business at age 15.)

The property, which enjoys spectacular views overlooking Los Angeles out to the Pacific Ocean, is actually the combination of two adjacent homes, both single-story postwar structures that Dave radically stripped down and reimagined as serene minimalist temples with the help of interior designers James Magni and Jeremy Graef. The first one, which serves as the primary residence for Dave and his husband, Allan Fanucchi, was completed a decade ago, featuring ten-foot-tall sliding glass windows, stainless-steel kitchen cabinetry, white Thassos marble niches, and, of course, an infinity pool offering scenic swims. “When I finished the house, I thought I was going to use it as an entertainment space,” Dave says, dressed in jeans, a white T-shirt, and a camo Supreme hat, with a lot of bling on his wrists. “It was my temple, but at the same time I wanted to socialize because my dream came true.” But during his first housewarming party a month after moving in, someone spilled a drink on his white Eurostone bridge, while others left marks on the walls and counters. The soirees quickly ceased.

As fate would have it, a few years later the home next door became available and Dave snatched it up and promptly gutted it. His idea was to revamp the house as a pavilion for entertaining guests and displaying artworks from his expanding collection. Paintings by artists such as Jeff Elrod, Charline von Heyl, Sterling Ruby, and Georg Baselitz mix with sculptures by Anish Kapoor, Antony Gormley, Chris Burden, and Jaume Plensa as well as a large group of works by Joel Morrison—known for his wide-ranging creations in shimmering stainless steel. With minimal time for gallery and studio visits (Dave oversees the brew of every batch of kombucha at his 40,000-square-foot factory in nearby Vernon), he has relied on the help of art adviser Michael E. Thomas. But when Dave sees an artwork that truly affects him, his response is visceral. Consulting with art adviser Michael E. Thomas, Dave has built an impressive collection that includes the 2012 mirrored wall sculpture Untitled by Anish Kapoor overlooking the fireplace area and the Mark Grotjahn drawing in the hallway beyond. Magni designed the daybed and marble side table, which sit atop a Decorative Carpets rug. Photo: Matthew Millman

“I came up with an equation of what inspires me the most, and I realized I love fine finishes, a detail that is very hard to accomplish, a sense of craftsmanship, and when a piece is not common,” he says. “I like the fragility of art but also the strength.”

That dual nature of art can be found in many museum-grade pairings throughout Dave’s homes: Robert Mapplethorpe photographs flanking a Donald Judd anodized-aluminum “Stack” sculpture; a dark-bronze Thomas Houseago bust surrounded by a rainbow-tinted Olafur Eliasson mirror work; a Giuseppe Penone piece made with marble and acacia thorns near a Tomás Saraceno suspended sculpture using carbon fiber and monofilament.

While some of the artworks may be delicate, this new “party house,” as Dave refers to it, was designed to be durable. “The interiors are all about simplicity, so it has seamless terrazzo floors, the kitchen has thick white Lucite cabinets, and there are a lot of man-made materials that are low-maintenance, so they can be flawless at all times,” says Magni, who has created similar art fortresses for the likes of Eugenio López and Vivian Dames. The designer outfitted the interior with trim, modern furnishings—including pieces from his own Magni Home Collection—featuring lots of steel and leather in soft, neutral tones. In the bedroom, an Alexandra Grant drawing adds graphic punch above the bed, while a work by David Musgrave makes a subtler statement between the windows; the chair is by CB2, and the stool is by DAO. Photo: Matthew Millman

The crowning achievement was the “engineering and architectural feat” of creating the open views, says Magni, who worked closely with the project’s architect of record, Otoniel Solis. “In the end it looks so simple, but it’s so complicated to get right.”

Solis says the roof was conceived “as wings taking off, with only the tips touching the floor on both extremes.” The interior layout, he adds, “was rearranged to maximize the new entertainment program of the house.” That might mean watching movies in the theater with friends or throwing full-scale parties that take advantage of the seamless connection between the indoor spaces and the expansive terrace, which features a pool lined in black Bisazza tiles. An Erector Set–like stainless-steel structure by Chris Burden stands in a bed
of river stones at the edge of the terrace. Photo: Matthew Millman

For Dave, one moment that perfectly synthesizes what the house is about can be found on the terrace, where Chris Burden’s Small Steps Skyscraper, an Erector Set–like stainless-steel tower, is set amid a bed of river stones. “We got this a month or two before Chris Burden passed, and it clearly has a relationship with this city,” says Dave, surveying the view beyond.

Recommended: Get a Rare Look Inside the Last Apartments at the Famed Hotel Chelsea

Walking across the bridge to the driveway, Dave remarks that “the next thing may be kids,” pointing to a neighboring hilltop where he and Fannuchi just purchased another home. Not that they’re giving up their serene refuge. “It’s just that kids can’t exist in this space, at least for a while,” he says. But there’s no doubt they will learn to appreciate the finer things soon enough.

A version of this article first appeared in print in our 2019 Winter Issue under the headline “Majestically Minimal.” Subscribe to the magazine.