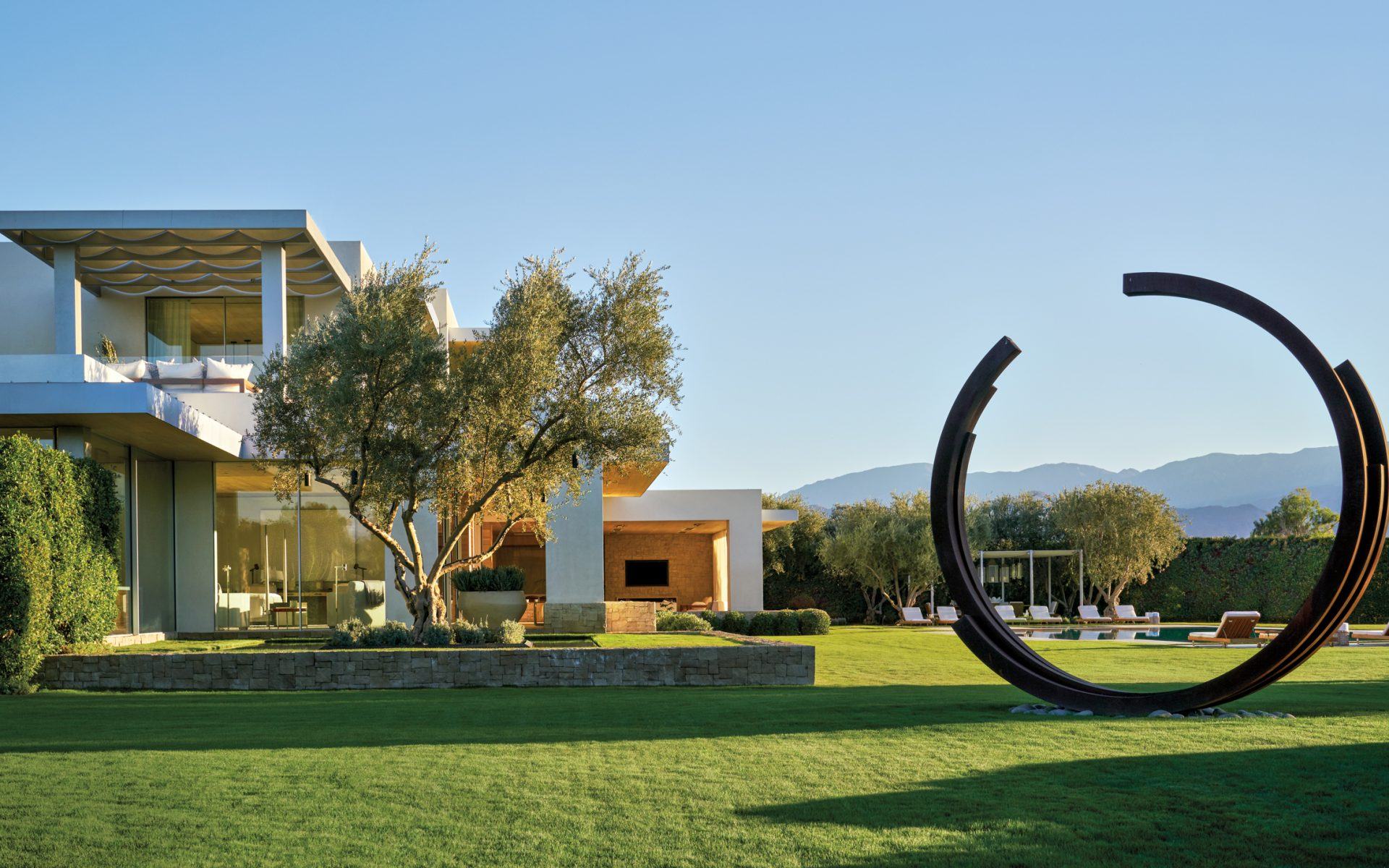 A Bernar Venet sculpture frames views of the Santa Rosa Mountains at the home of hotel developer Jim Lippman and his wife, Linda, at the Paradise Club in La Quinta, near Palm Springs.
Photo: Nikolas Koenig Common wisdom suggests that as we grow older we grow more conservative. Just don’t tell that to Linda and Jim Lippman. Based in Los Angeles, the couple inhabits a Mediterranean-style house with an old-world vibe in Brentwood, and they take ski vacations to their rustic chalet in Deer Valley, Utah. But when they decided to build a third residence—a weekend retreat in the desert, at the Madison Club in La Quinta, near Palm Springs—the Lippmans chose a radically different path.

Instead of adopting the conventions of the club’s Spanish-style villas, which convey a reliable California timelessness, they went modern—as in clean-lined, pared-to-perfection, glass-box modern. Their only condition? The house, which is set on two and a half acres bordering a golf course, couldn’t feel austere. “Our biggest concern,” Linda recalls, “was making sure the home was comfortable, warm, and welcoming.”

Jim, a real estate entrepreneur and hotelier whose firm develops luxury resorts, including the freshly renovated Hotel Oceana in Santa Monica, interviewed a long list of architects for the project before selecting Steve Giannetti, who had previously designed an elegant addition to the Lippmans’ L.A. home. Giannetti is known for combining a classical European aesthetic with “an emotional warmth,” as he puts it—a quality he translated to a modern structure for the Lippmans. The main living and dining area opens up dramatically to the outdoors, where a spiraling Bruce Beasley sculpture stands next to the swimming pool. Busta installed an Alison Berger lighting fixture over the red-lacquered Liaigre table and chairs opposite a seating area where a Holly Hunt sofa and chairs surround a Liaigre cocktail table. Photo: Nikolas Koenig

The architect conceived the seven-bedroom, 20,000-square-foot house as a series of pavilions—linked by glassed-in terraces and interwoven with courtyards and reflecting pools—to create more invitingly scaled spaces and facilitate a true indoor-outdoor lifestyle. Expanses of glass offer plentiful light and enviable views, not least in the main living-dining area, where a retractable 50-foot-wide, 14-foot-high glass wall reveals the money shot: peerless views of the spectacularly undulating Santa Rosa Mountains.

To complement the home’s stucco-and-limestone exterior, Giannetti finished the walls in a pale plaster, lined the ceilings with planks of white oak, and paved the ground-floor rooms with limestone slabs that extend onto the terraces. “A lot of modern buildings appear machine-made for that perfect, precise look,” says Giannetti. “A natural palette allowed the architecture to have a warmth. I always dreamed of creating a modern house that felt as though it was from the earth.” The subtle palette, in turn, informed the decor. Responsibility for the art and furnishings fell to another repeat Lippman collaborator, Anna and Jonathan Busta, head of the design firm Busta Studio, whose arresting yet intimate spaces can be found in three of Jim’s hotels. “At first, I thought we should do something quiet,” Anna explains. “But I realized the simple, beautiful canvas needed something with more flavor for a strong contrast.”

While Busta did employ muted fabrics—pale leather and cashmere upholstery in the master bedroom, crisp white sofas in the living area, hushed silken rugs throughout—she went full tilt on some key furnishings. The entrance gallery, in which the designer established a confident mood, features a dizzying blue concave mirror sculpture by Anish Kapoor offset with a rectangular plexiglass ceiling fixture by Johanna Grawunder that appears to dangle at a precarious angle. Anchoring the game room (the Lippmans have three adult children and a growing extended family) are a chic black pool table and a bowling alley illuminated in shifting psychedelic colors. And the dining area, where Busta made her boldest statement, is outfitted with a monumental glass chandelier by Alison Berger suspended above a table and chairs lacquered in fiery red. Jim concedes that the dining set “was kind of scary for us in the beginning, but the pop of color is a nice surprise to everyone who walks in the door.”

The Lippmans have long collected art, favoring works by French Impressionists for their L.A. manse. This home, however, called for works with a more contemporary sensibility, including pieces that could live in the desert. Animating the gardens designed by landscape architect Sammy Castro are large-scale sculptures by Mark di Suvero and Bernar Venet as well as eye-catching pieces by emerging artists, such as a whimsical starburst form by Norman Mooney that sprouts from a reflecting pool. In the serene master suite, a Pont des Arts bed dressed with custom Loro Piana bedding is flanked by Holly Hunt tables and lamps, while a Bryan McCollin low table stands between Jean-Michel Frank chairs, a reedition by Hermès; the daybed is by Liaigre, and the rug is by ALT for Living. Photo: Nikolas Koenig

“I have a great appreciation for beautiful antiques and traditional design,” says Busta, “but my language is contemporary design and art.” The Lippmans are now happily fluent in that language themselves—so fluent they’ve told Busta they want an even bolder version for their next home, a sprawling apartment on Park Avenue in New York.

A version of this article first appeared in print in our 2019 Summer Issue under the headline Changing Course. Subscribe to the magazine.

Cover: A Bernar Venet sculpture frames views of the Santa Rosa Mountains at the home of hotel developer Jim Lippman and his wife, Linda, at the Paradise Club in La Quinta, near Palm Springs.
Photo: Nikolas Koenig
Next Post