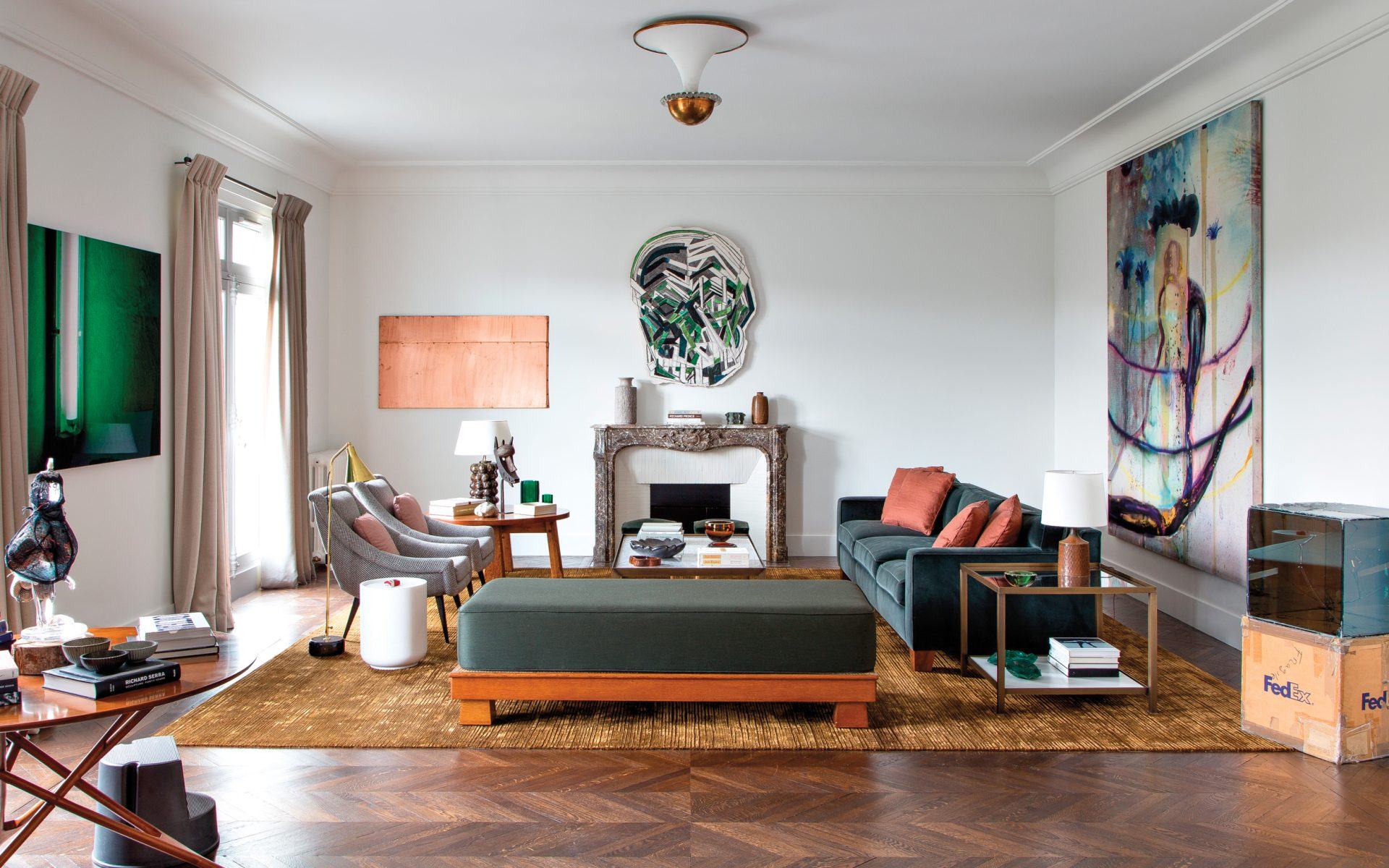 Luis Laplace has made a career crafting quietly chic interiors for influential art-world players. The Argentine-born, Paris-based architect and designer has masterminded residences for artist Cindy Sherman, top-tier collectors like Mick Flick, and preeminent dealers such as Emmanuel Perrotin and Iwan and Manuela Wirth. Laplace’s public commissions include refurbishing a museum devoted to the Basque modern sculptor Eduardo Chillida in San Sebastián, Spain, as well as designing multifaceted art centers for Hauser & Wirth in England and on Menorca, off the coast of Spain.

So it came somewhat by surprise when Laplace received a call four years ago from a famous model who wanted to quickly renovate a Paris apartment for her family. “I was a bit scared at the idea of working with such a glamorous woman,” Laplace admits. “To be honest, I thought she was going to be difficult.”

Adriana Abascal, a former Miss Mexico who has walked the couture runways for Valentino and Versace, had her own reservations. “I discovered Luis online, and I was a little afraid,” she recalls with a laugh. “At 20 years old, everyone tells you what to do. At 40, you really know what you want. He was already very established.”

And yet they clicked instantly. “We realized we have a lot in common,” Abascal says. “We’re both foreigners living in Paris. Luis is a very global individual. I knew right away he was going to understand me.” The spacious five-bedroom apartment, situated in a Haussmann-era building in the 16th arrondissement, offers beguiling views of the Eiffel Tower and Arc de Triomphe. But the interiors needed a total refresh to suit a modern family. Abascal and her husband, French financial executive Emmanuel Schreder, live with her three children, as well as two Labradoodles she describes as “the size of ponies.” There was also an expansive art collection to account for—not least a two-ton sculpture by Paul McCarthy. And the deadline was tight: one year from start to finish.

Laplace’s approach was to simplify the architectural details of the 19th-century spaces, stripping out ornate paneling and replacing busy-looking moldings and baseboards with clean-lined versions, while retaining timeless elements, such as the original herringbone parquet flooring and marble fireplace mantels. He reconfigured some rooms, creating space for a fashionista’s dream dressing room, for instance. And he of course made sure there would be plenty of walls for displaying bold works of art by Julian Schnabel, Thomas Houseago, Christopher Wool, and others. “I designed the space to be contemporary yet classic,” he explains. “It was important to retain elements of the period but have it feel modern.” At one end of the living room, a Fabio Lenci pendant is installed above a seating area with a Theo Ruth sofa covered in a Pierre Frey fabric, a 1960s armchair, a ’70s resin cocktail table, and a ’50s floor lamp. A Sherrie Levine steer skull is flanked by Richard Prince and Glenn Ligon paintings on the far wall, while an Eric Muñoz Corona box sculpture rests on the Steinway piano and ’20s Italian glass vessels and a vintage metal lamp top the mantelpiece. Photo: Jean-François Jaussaud

As the interiors evolved, the designer and his client maintained a running dialogue, meeting weekly. “I’m not interested in doing projects alone,” Laplace says. “I’m here to resolve design problems. Things need to work for real living.” When it comes to the art, he never devises a space for a particular work—that would be too formulaic, too stiff. “I learned that an academic approach works only at the beginning of the process,” he explains. “You need a sixth sense to have artworks speak to each other.”

The furnishings, some of which were purchased on weekend flea-market excursions with the couple, are as eclectic as the art. At one end of the living room, a plush sofa of Laplace’s design joins midcentury Italian armchairs and a beefy 1960s ottoman by James Mont; at the other end, he paired a 1970s resin cocktail table with a rare Theo Ruth curved sofa. In the library, limed-oak paneling forms an elegant backdrop for a sleek Jean Adnet desk and chair wrapped in oxblood-red leather. A gleaming 1940s table was virtually the only furniture needed in the gallery-style foyer, which holds an eye-popping neon ceiling installation by Pae White, a dusky ship painting by Ed Ruscha, and the massive McCarthy sculpture that was craned in through a large window after steel reinforcement beams were added beneath the floor. A work by Ha Chong-Hyun is mounted on the library’s limed-oak bookcase above a vintage Jean Adnet leather-wrapped table and chair. The desk lamp is 1960s Scandinavian, the floor lamp is an Ignazio Gardella design produced by Azucena, and the rug is by Tai Ping. Photo: Jean-François Jaussaud

Abascal discovered the McCarthy at Art Basel several years ago. “I was at a moment where I had spent all my budget on art,” she recalls. “It was 11 a.m., and I put it on reserve. I told a friend to take me to a bar for a tequila. I remember thinking to myself, I need to find an apartment with room for myself, my kids, and this sculpture.”

Now, courtesy of the art-world’s secret design weapon Luis Laplace, she has all that and more—in superlative style.

A version of this article first appeared in print in our 2019 Fall Issue under the headline “Paris Match.” Subscribe to the magazine.