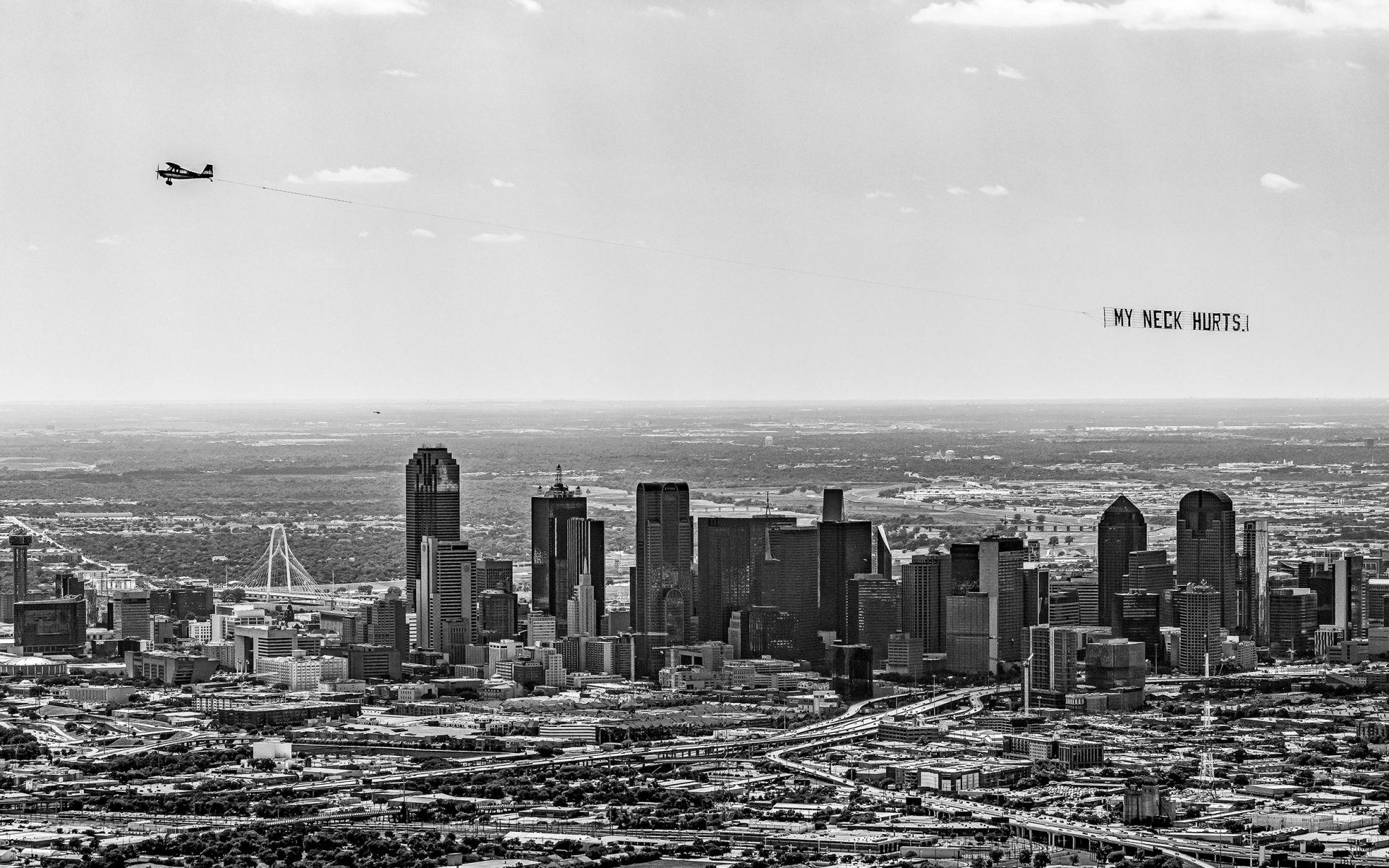 As artists and activists respond to George Floyd’s death with pieces and installations that challenge systemic racism, many of those public works have captured national attention. The bold yellow “Black Lives Matter” inscription emblazoned on the two blocks of Washington, D.C., leading to the White House has inspired similar paintings in Sacramento, California; Raleigh, North Carolina; and Seattle. Planes pulling banners bearing Floyd’s final words across the sky made an equally impactful yet particularly chilling statement.

The latter demonstration comes from Louisiana-born, Texas-based artist Jammie Holmes and his gallery, Detroit’s Library Street Collective. To ensure Holmes’s powerful message is anything but fleeting, Dallas Contemporary is expanding on the work with a new virtual exhibition titled “Everything Hurts,” launching June 16. A self-taught emerging artist currently living in Dallas, Holmes has produced a body of work that is largely comprised of neo-Expressionist paintings that tackle political, social, and religious issues, inspired by his impoverished upbringing and current events. “Jammie’s depictions of everyday life have so much meaning, from the symbolism that is layered onto the canvas to the power of minorities being depicted in fine art by minorities,” Carolina Alvarez-Mathies, Dallas Contemporary’s deputy director, tells Galerie. “To see portraits of brown and black bodies represented in contemporary portraiture fills me with deep joy—these works are groundbreaking in their humanity and should be celebrated.” Holmes’s choice to experiment with aerial art further attests to his innovative, activist vision. “Like countless silenced and fearful young black men, I have been the victim of police misconduct on a number of occasions in my life,” Holmes said in a statement for Dallas Contemporary. “At some point, they will realize they can’t kill us all.”

In support of Minneapolis and the larger African-American community, the artist mobilized five planes to fly over five cities (Detroit, Miami, Dallas, Los Angeles, and New York) on May 30 between the hours of 11:30 a.m. and 9 p.m. EST. The messages were derived from Floyd’s resounding last words: “Please I can’t breathe,” “My stomach hurts,” “My neck hurts,” “Everything hurts,” and “They’re going to kill me.” “The use of sky media to recount Floyd’s final words presents a contrast to the noise of digital media and employs a form of communication that is most often used by the privileged to announce sporting events, marriage proposals, or promote consumption,” explained Holmes. “It is rarely used for political or social purposes—to exercise free speech—because it is an outlet unavailable to the poor and marginalized. I hope that people will be reminded of the power we can have to be heard and that coming together behind a unified message is key for real change.” Like many, Alvarez-Mathies saw Holmes’s aerial demonstration on Instagram. Alongside Library Street Collective and Dallas Contemporary curator Laurie Farrell, the museum’s enriched digital exhibition quickly came together to amplify and immortalize Holmes’s demonstration. Accompanying photographs of the planes in action is a video that documents the day and provides an in-depth interview with Holmes in his studio. Additionally, free printable signs made by Holmes and his gallery will be available for protestors. The museum will also host a town hall of sorts and a more traditional panel to shed light on the current art landscape in north Texas and beyond. Several other actionable projects are in the works, making #DCfromhome—Dallas Contemporary’s virtual content initiative—an important space to watch. “I’m proud to partner with Dallas Contemporary to expand the presence and ideas behind They’re Going to Kill Me as an opportunity to discuss how support of the black community, and fighting racism and police brutality from inside all institutions—political and social, art and otherwise—is crucial for lasting change,” Holmes said. “Dallas is my home, and I know we can do better together.”