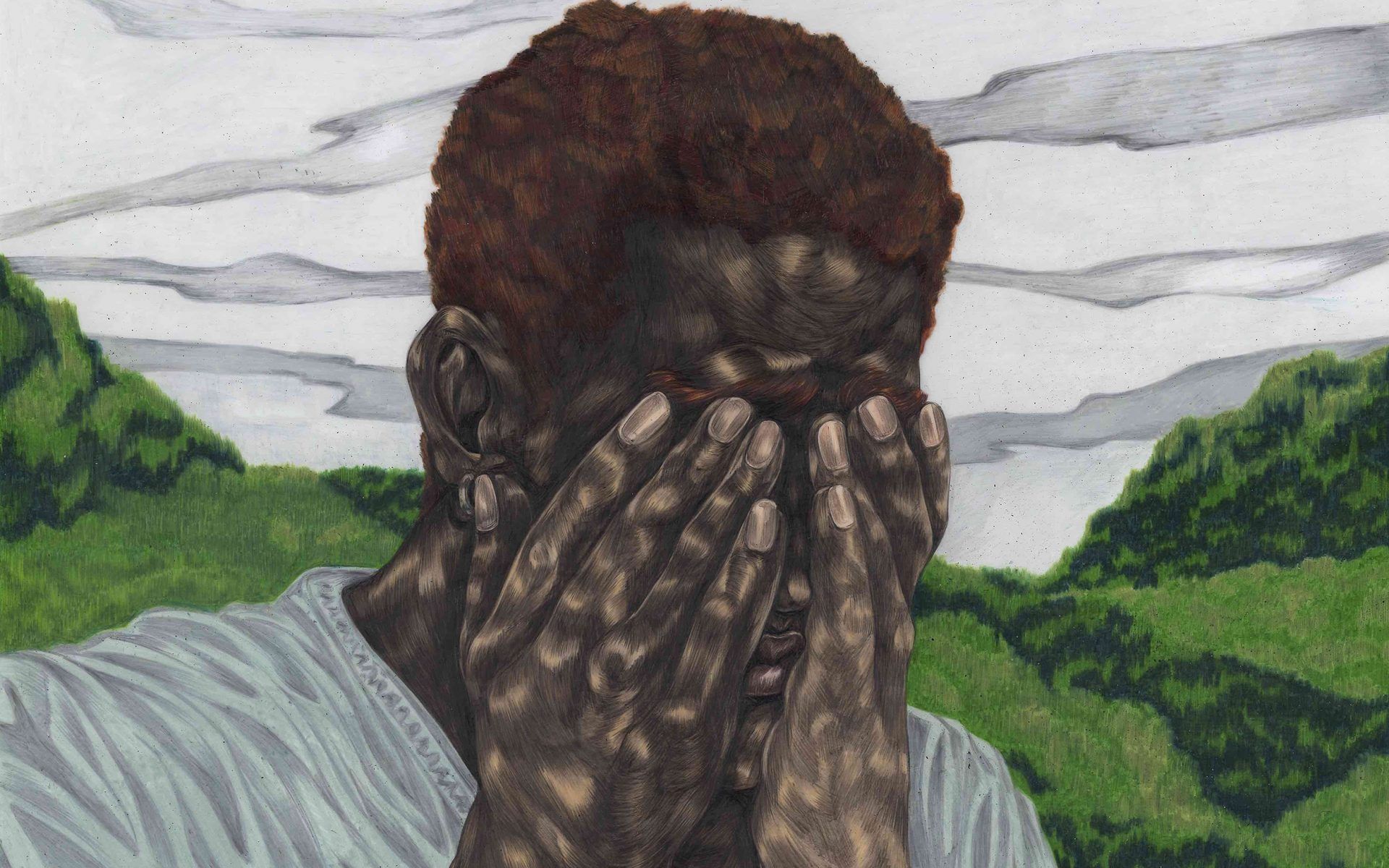 In the wake of George Floyd’s death in Minneapolis, large-scale protests and demonstrations demanding justice have broken out across the U.S. As a result, artists have taken to social media to post works that challenge, educate, and ultimately, offer a space for reflection during this turbulent time. Below, we gathered some of the most powerful images by artists shared on Instagram in recent days.

“Speaking with my dear friend and fellow artist, @tionam, yesterday, she spoke so eloquently of how in times of great pain, anger, and confusion, it’s a radical act to create beauty. We have to fight against the urge to contribute to the pain, it’s a daily fight to do so. I hold that close to my heart now,” Toyin Ojih Odutola says in her Instagram post. With an exhibition of new works created for Jack Shainman’s virtual viewing room, titled “Tell Me a Story – I don’t Care if It’s True,” the artist writes: “At first, I wasn’t sure whether it was the right time to exhibit, due to the drastic changes we are all undergoing because of the Coronavirus as well as the more recent, horrific events that have transpired, prematurely making ancestors of beloved black and queer lives. Thinking of all the people effected by the virus, by systemic oppression and injustice, all the stories and the new ways we all are adjusting to our present reality transmitted into these works. . . . I sincerely hope these works bring you all solace, a moment of respite, and space to ruminate—quietly, steadily. I hope it helps you all gather, to heal, to find the beauty in our fleeting moments despite the pain and trauma, and in the end, some semblance of peace in the midst of this cruel madness.”

Los Angeles–based photographer Paul Mpagi Sepuya challenges our relationship with an image by deconstructing classic subjects such as the male nude and self-portrait using mirrors, drapery, and collage. He is generously donating an open-edition print of this recent artwork titled Studio (0X5A4983) to those who donate to a list of organizations supplied on his Instagram, including Alliance of Californians for Community Empowerment, BLM Los Angeles, Fair Fight, Minnesota Freedom Fund, National Bail Out, and Black Trans Advocacy Coalition. The suggested donation amounts are $250, $500, $1,000, and above, and donors are required to email the receipt to solidarity@paulsepuya.com with a full name and mailing address. The archival pigment print is 6 x 9 inches.

Hank Willis Thomas, who is known for his provocative photographic and text-based works that explore African-American identity and commodification, posted the work Sunday, March, 7 1965 from his 2014 “History Doesn’t Laugh” series. The work features images of civil rights activists under extreme duress—in this case, when they were gassed and clubbed by law enforcement officers as they attempted to cross the Pettus Bridge in Selma, Alabama. He used accompanying hashtags: #ameliaboyntonrobinson #spidermartin #bloodysunday #weshallovercome #thenisnow

Lorna Simpson shared a powerful moving image of a young man with his hair aflame in a bold shade of blue. “Arrests and convictions of all individuals involved in lynch mobs and all acts of hate, an end to police brutality and murder of black people and massive massive change to a dangerously unjust justice system. As @zorasc says to me it ain’t even close to being a justice system . . . it’s system of destruction,” she writes.

Using a novel hybrid of assemblage and process art, Kevin Beasley takes found objects—most often clothing—and weaves together his own memories and experiences, along with historical and cultural references, in order to examine the role of power and race in American society. Sharing a new work titled The Light, constructed with raw Virginia cotton, T-shirts, housedresses, resin, and gold flake, he writes: “There is a light, that shines. Special for you, and me.”

The young Colorado-born artist creates large-scale figurative canvases of black subjects drawn from photographs she takes. On Instagram, Jordan Casteel shares a detail of a 2017 work that was exhibited at Casey Kaplan gallery titled MegaStarBrand’s Louie and A-Thug, which depicts two confident young men sitting on a pair of folding chairs, gazing out of the frame. Cropping in on the message on the man’s shirt, she emphasizes: “T.H.U.G •• The Hate U Gave US ••PERIOD.”

The New Haven, Connecticut, artist shares one of her recent collages, depicting a uniformed New York Police Department officer with a holstered gun standing in front of a trompe l’oeil brick wall. Her message is a call to action: “Stop and read⁣⁣⁣. There are multiple presidential primary elections taking place around the country today. ⁣⁣⁣⁣

London artist Isaac Julien shares Who Killed Colin Roach? (1983), one of his earliest photographic works that documents the true story of a young man’s suspicious death at the hands of the police, after he was shot at the entrance of a police station in East London in 1982. The police claimed Roach had committed suicide. The work challenges our fixed ways of looking at black culture. He writes: “George Floyd, same story, one London nearly 40 years ago US Minneapolis today! You know the song’ how long has this been going on!”

The Texas-born, Los Angeles–based artist who is bringing the medium of tapestry into the 21st century with bold contemporary weavings that explore the complexities of being black and queer in the U.S. today shares a striking split image of his work paired with an image by painter Calida Rawles. Diedrick Brackens and Rawles have created a limited run of posters to raise funds supporting various charitable organizations. Those who donate an amount of $100 or greater will receive both artist posters. He writes: “Where to begin . . . We are all feeling it, helplessness in the face of tragedy after tragedy. We all want to do something. As we watch the madness unfolding in Minneapolis and across the country. We see folks on the frontlines, making a difference and exercising their rights to protest. In spite of the COVID-19 epidemic, there are folks still willing to take to the streets and risk everything to fight for justice for all of us. It is important to us that we get funds to those in need and want a positive change.”

Wardell Milan posts a work from his recent series “The Balcony,“ a collaboration with Borch editions that explores the absurdity of politics, social and political structures, power dynamics, and spectatorship, drawing on the tropes of a play by Jean Genet. This 2019 etching titled I Am Not Crazy Life Is is accompanied by a request for donations to these organizations: @nationallawyersguild
@avenuesforjustice
@bailproject
@unicorn.riot
@reclaimtheblock
@brooklynbailfund
@emergency_release_fund
@colorofchange
@blackvisionscollective
@campaignzero
@mvmnt4blklives

Adam Pendleton draws on content from historical texts and visual culture to critically examine ideas from a variety of different cultural perspectives. Accompanying this text-based work, he simply captions: #seethesin

The Houston artist, who creates drawings, videos, and installations dedicated to examination of the historical and contemporary experiences of African Americans, shared Archangel from 2014, which features a flying drone is draped with votive offerings such as flowers, cigarettes, and a Black Lives Matter T-shirt. He writes: “Made this in 2014 just after Eric Garner was murdered by Police. Thinking about it again tonight. #ripgeorgefloyd”

A detail of Only Light, Only Love, an artwork created by Shinique Smith for Martin Luther King Jr. Station along the upcoming Crenshaw/LAX metro line. Honoring the station’s eponymous activist, the artwork includes a selection of empowering words from King’s speeches and autobiography. Smith shares this one with her post: “Darkness cannot drive out darkness; only light can do that. Hate cannot drive out hate; only love can do that.”

For Stanley Whitney, an artist known for his loosely gridded multicolored paintings, images speak louder than words as he simply writes: “No caption needed.”

Combining representation and abstraction, Nina Chanel Abney’s paintings capture pop culture and racial conflicts. She has been sharing a number of older works from 2015 and 2017 that depict scenes of police brutality.

Daniel Arsham shares this striking painting by Los Angeles artist Alex Gardner, writing: “This painting by @artposer has been above my bed for years. This morning as I looked at it a wave of emotion came over me. I grew up in a very diverse environment and had friends from all races as a child. The black community has influenced me, my work, and my worldview in so many ways. This week you will not see any of my work here, rather you will see the work of Black voices from around the world and across history who have influenced me and whose work I cherish. Many industries benefit from Black culture. Speaking against injustice is one thing, but engaging in systematic and structural change is the change we need. Art is a vehicle for change and it speaks without language to everyone. You can find more information at the link in my bio.”

Marylin Minter is no stranger to activism through her art. Last year, the outspoken artist joined with artists like John Baldessari, Jenny Holzer, Laurie Simmons, and Black Women Artists for Black Lives Matter to create “Anger Management,” a pop-up shop at the Brooklyn Museum to channel their rage at the current administration. Here, she shares a work depicting a black woman with the word resistance written above.