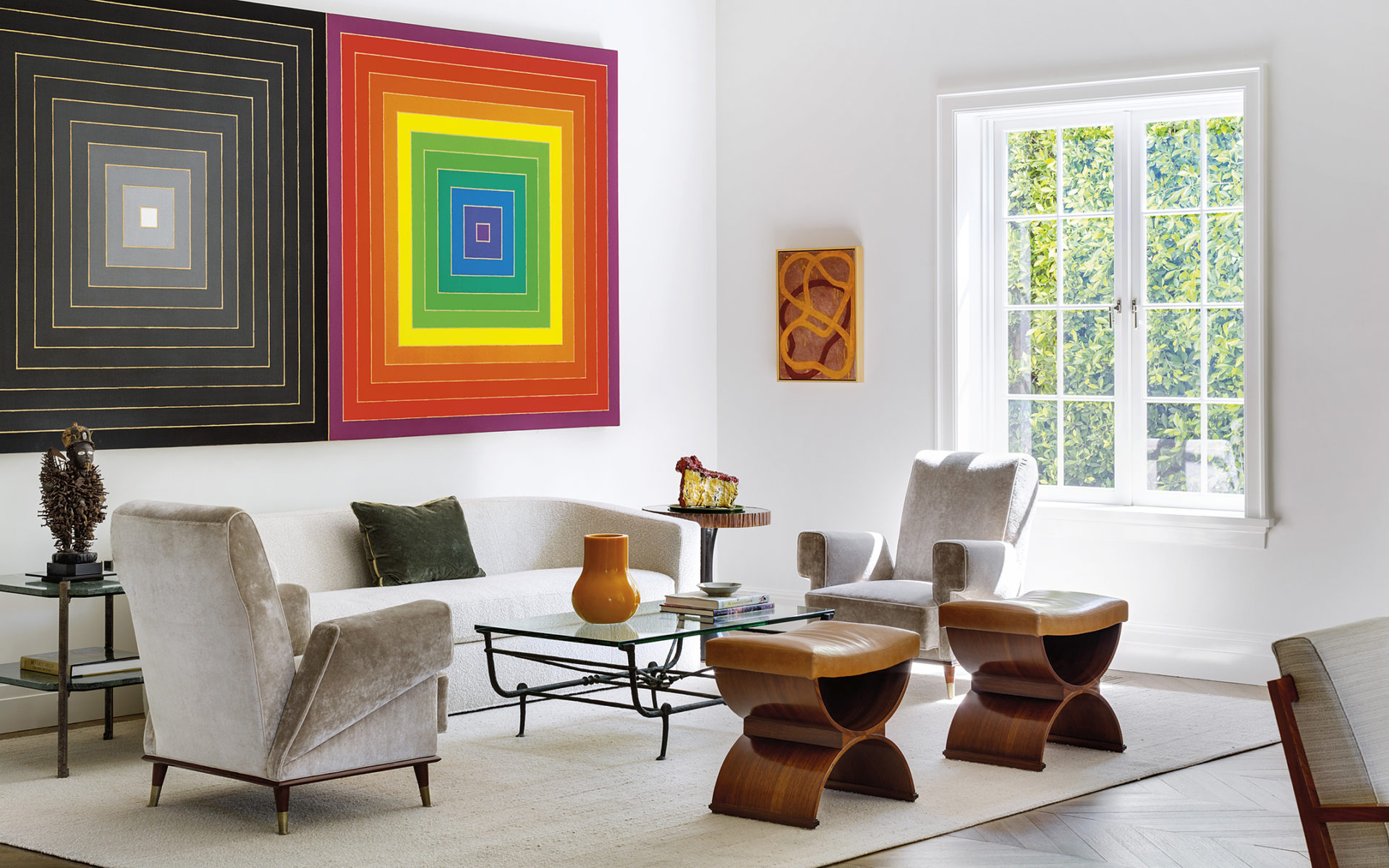 Widely regarded as one of today’s leading abstractionists, Frank Stella is a master at creating narratives through minimalist geometries and bold use of color. Born in 1936, the American artist’s transfixing paintings and sculptures are in the permanent collections of such esteemed institutions as the Tate Gallery in London and New York’s Museum of Modern Art—the latter of which hosted Stella’s 1970 solo exhibition when was just 34, the youngest artist to ever receive such an honor. In 2015 (the same year as his Whitney Museum retrospective), Stella doubled the previous auction record for one of his pieces, with Sotheby’s selling a crimson canvas titled Delaware Crossing for $13.7 million.

Since then, Galerie has spotlighted a handful of collectors who count Stella’s paintings among their holdings. See below for a look at how they can transform a space. 1. A wall sculpture from Frank Stella’s 1973 Suchowola series anchors the living room in art dealer Marianne Boesky’s Manhattan apartment, which was renovated by architect Deborah Berke. The periwinkle sofa is by DDC, while a bird’s-nest sculpture by Björn Braun sits on an Yves Klein cocktail table, and the silver sculpture is by Sanford Biggers. The living room of Bernar Venet’s residence in the south of France. Photo: Ricardo Labougle

2. Esteemed sculptor Bernar Venet’s residence in the South of France features Stella’s Parzeczew III, a work on cardboard, hanging next to a sculptural steel table and chairs crafted by Venet. 4. A Frank Stella painting dominates the foyer of this Bermuda-style Palm Beach residence conjured by Aman & Meeks. The chandelier is by Alexander von Eikh, the 18th-century Swedish bench is from H. M. Luther, and the bicycle is by Lilly Pulitzer. 5. A two-part Frank Stella painting animates a Los Angeles living room masterminded by designer Madeline Stuart. A curvy Brice Marden abstraction on the adjacent wall overlooks a pair of 1940s Italian armchairs from Karl Kemp upholstered in a Classic Cloth linen velvet, while a Jerry Pair leather covers Lee Calicchio stools. On the tables flanking the sofa are an Ibo figure from Nigeria and a sculpture by Claes Oldenburg.