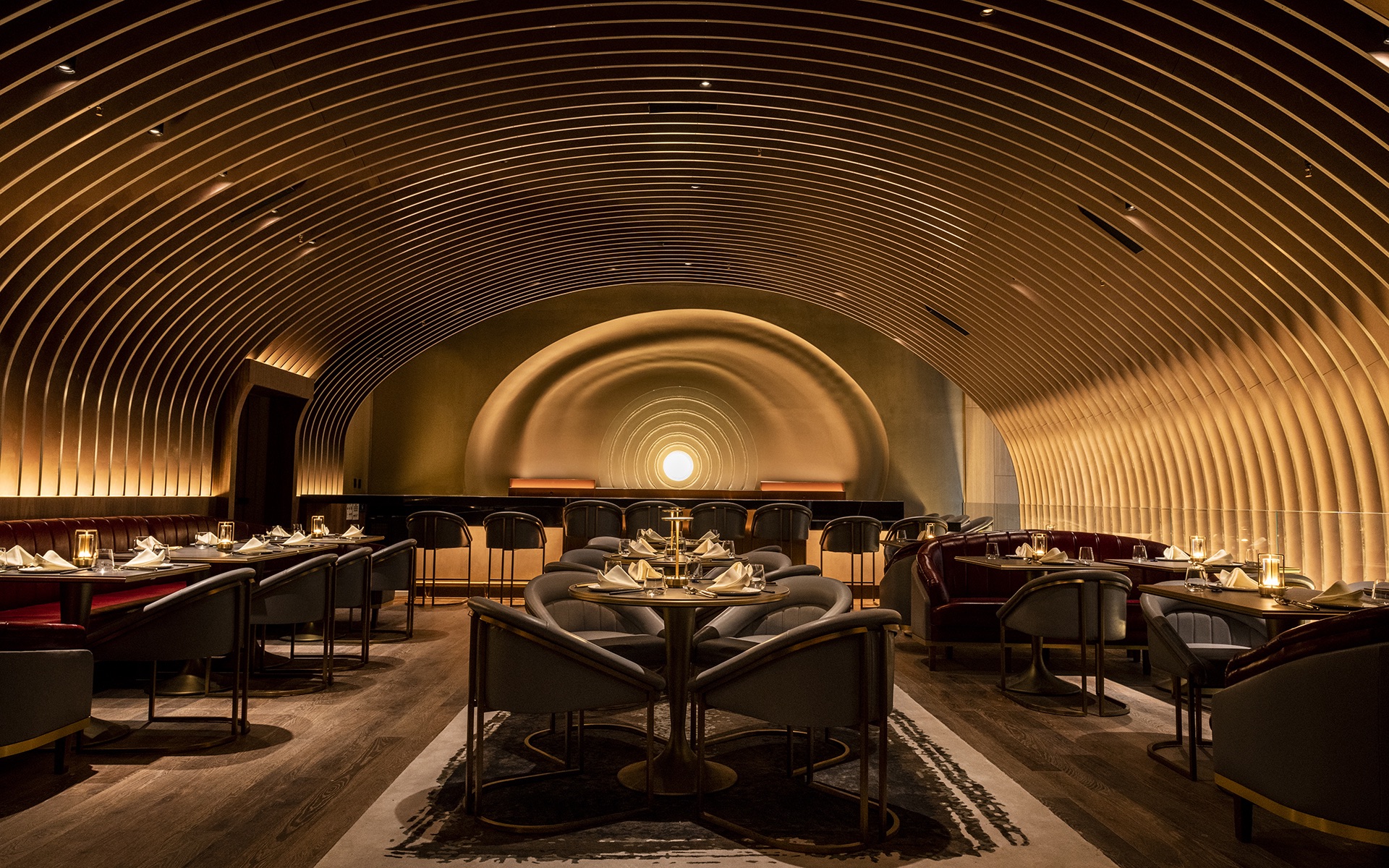 David LaChapelle is taking over the six floors of Fotografiska New York with his lively photographs in his new exhibition, Make Believe. The collection of 150 works on view surveys 11 thematic bodies of LaChapelle’s fine art photographs spanning his 40-year career. The diverse breadth of work draws on themes of religion, the natural world, gender identity, body image, and celebrity. A never-exhibited large-scale wheatpaste collage installation, entitled Vox Populi (1995-2021), comprised of the most iconic images LaChapelle captured of the pop culture zeitgeist, will span approximately twenty-two feet of the museum’s churchlike interior. This must-see retrospective will be on view until January 9, 2023. —Stefanie Li 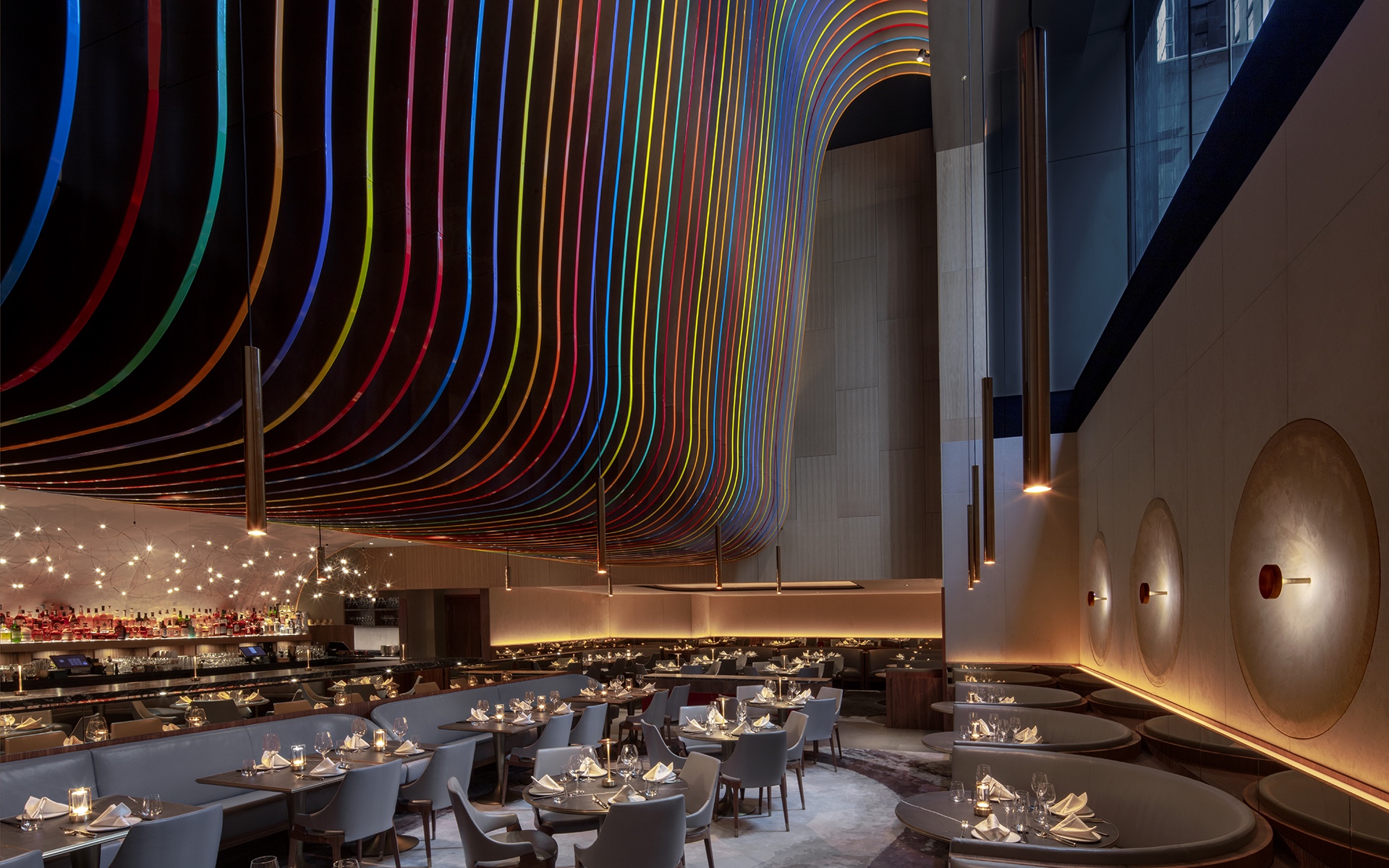 2. New Restaurant 53 Combines the Best of Cuisine, Art, and Design

The new restaurant 53 in midtown New York has been creating waves not only with its wildly delicious take on Asian cuisine but for its singular approach to art and design as well. Designed by ICRAVE, the multi-level fine dining mecca located in the base of the 82-story tower by architect Jean Nouvel at 53 West 53rd Street makes a bold statement with a sculptural series of sweeping blades that define its look. While this grand gesture, created to evoke the element of chi moving through the space, may turn heads, it’s the more subtle design details that harmonize the 11,000-square-foot space. Take, for instance, the subtle beauty of the watercolor-inspired carpets by Fort Street Studio or the mesmerizing, rippled glass disc by Thinkglass behind the bar. Living up to its location adjoining the Modern Museum of Art, 53 also features a selection of rotating artworks, launching with pieces by artist Jorge Pardo followed by Ross Bleckner, curated by Petzel Gallery. Of course, this being a restaurant in the illustrious Altamarea Group, which includes Italian destinations Marea and Ai Fiori, the cuisine is just as spectacular as the setting. Singaporean chef Akmal Anuar, who launched Asian restaurants 3 Fils and 11 Woodfire in Dubai, has curated a menu that has the power to not be outshined by its spectacular setting. —Jacqueline Terrebonne 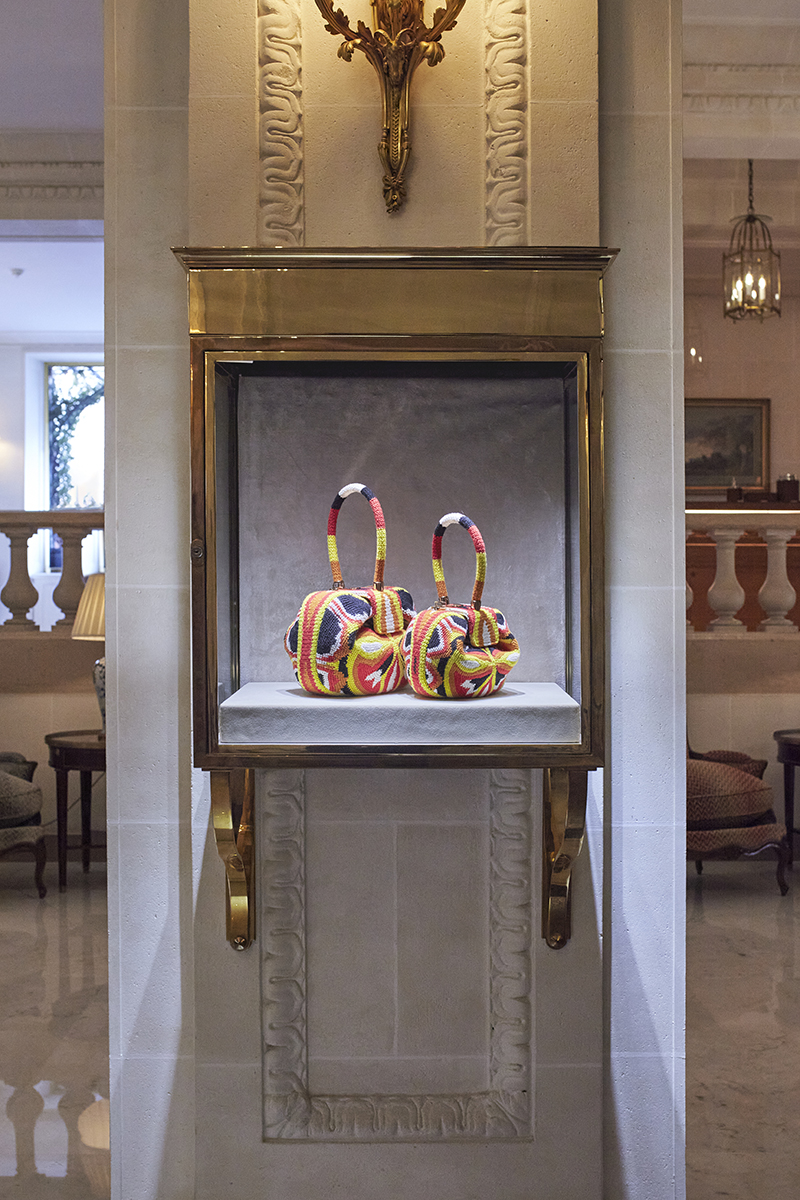 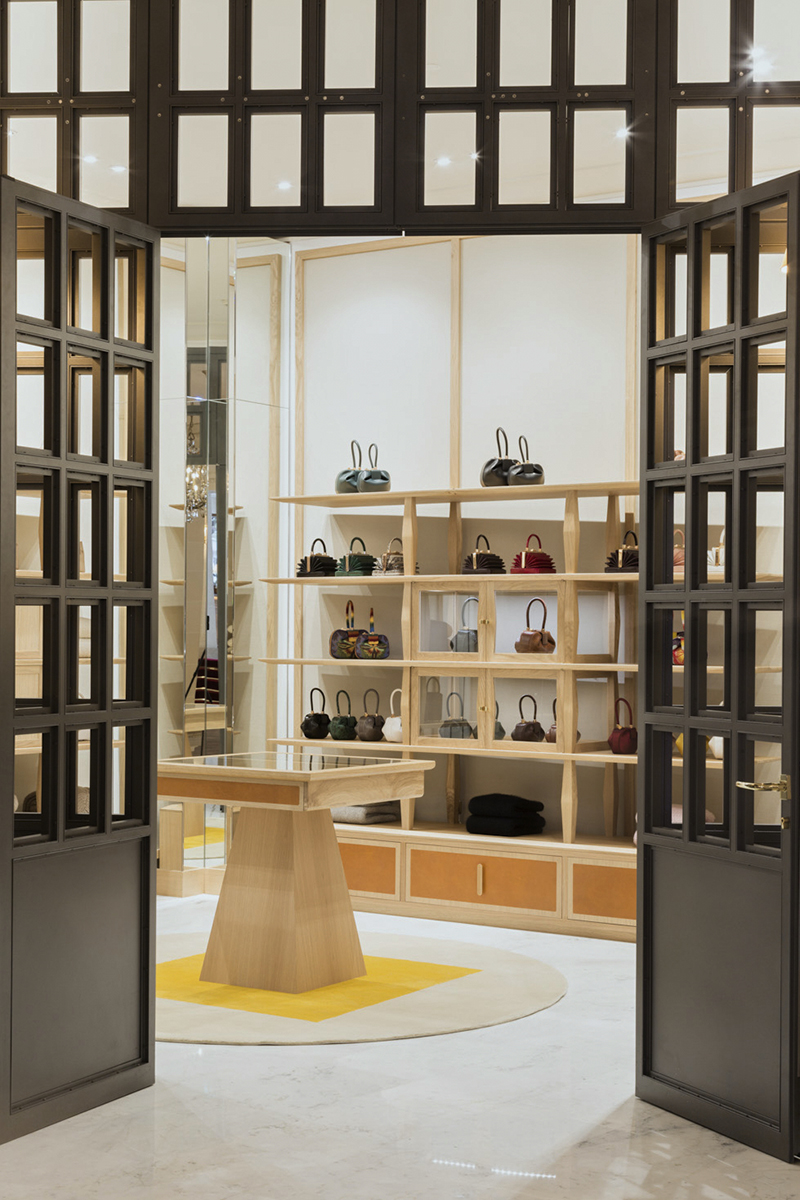 Celebrated for its grand suites and enchanting garden terrace, Le Bristol Paris has welcomed another notable space at the Right Bank hotel sure to delight the fashion-conscious traveler. For the next two months, the retreat, part of the Oetker Collection, will host Gabriela Hearst’s first Paris retail destination. Inside the ground-floor boutique, stylesetters will discover clothing from the designer’s women’s and men’s collections, including cashmere pieces, jewelry, and other examples of ready-to-wear. Most eagerly sought after will be the curated selection of handbags, including the cloud-shaped Nina and its more petite sister, the Demi, as well as the fanlike Diana, all displayed on custom casegoods crafted by French sculptor Antoine Dumas and craftsman Benji Gavron. “Le Bristol simply put is the best hotel in the world,” the founder and creative director, one of Galerie’s recent “Creative Minds” honorees, said in a statement. “Having the opportunity to open our store at the hotel is a privilege. It will be our first proper presence in Paris… and, it’s my home when in Paris.” —Jill Sieracki 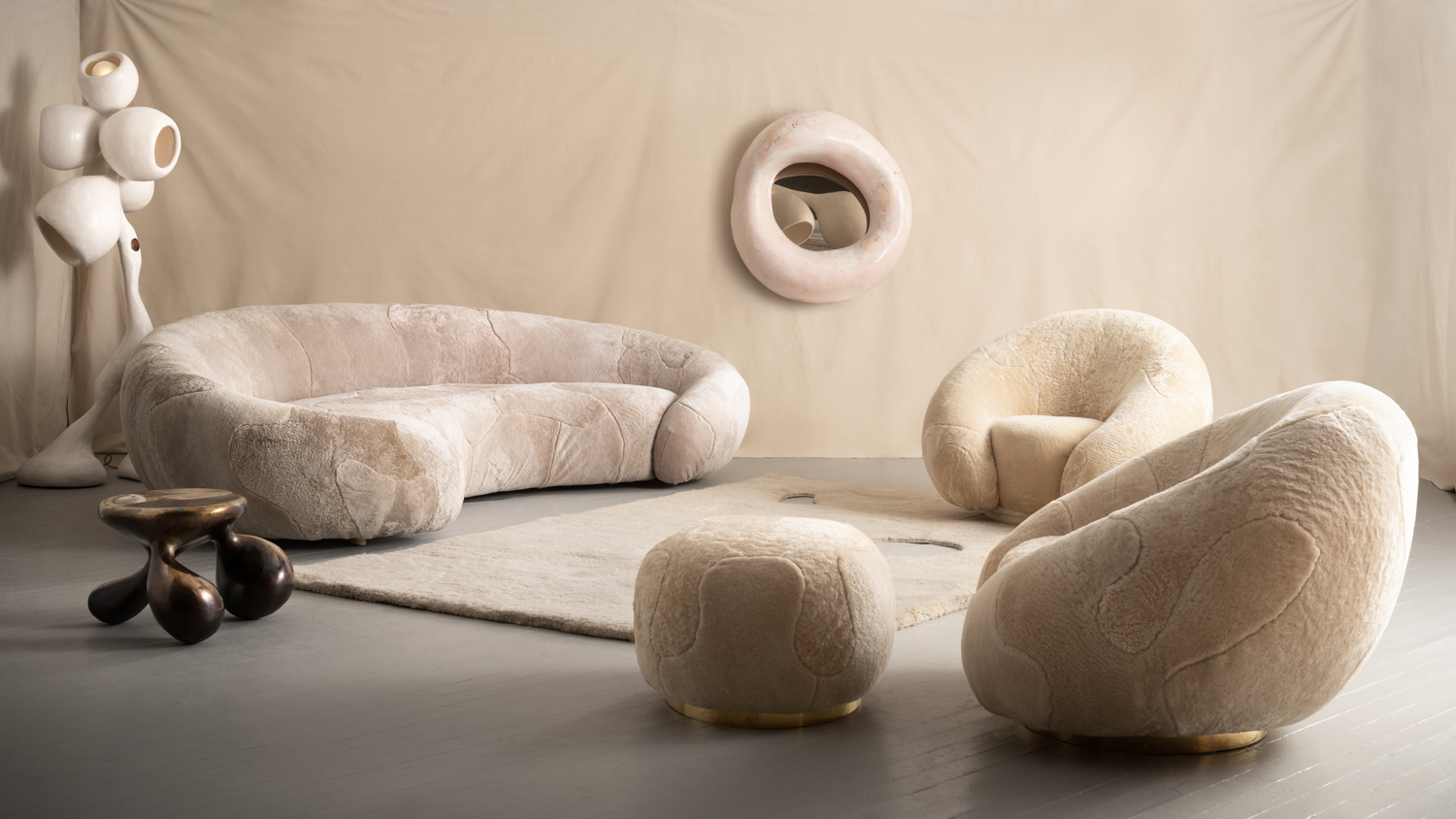 Three years after relocating his flourishing art and design practice from Long Island to Southern California, Rogan Gregory is back in New York with his third exhibition at R & Company, “Imperfect Truth.” Opening September 9, the highly-anticipated show reimagines the Tribeca gallery’s first floor as a dreamlike residence, complete with “living” and “dining” areas populated by more than two dozen of Gregory’s latest sculptural forays. Visitors will be wowed by statement lighting, seating, and other furnishings crafted out of sturdy materials such as polished gypsum, bronze, and wood. “I use materiality, form, and texture to engage the primeval, instinctive brain, juxtaposing our built, rectilinear, hard, flat world with a confluence of biomorphic, asymmetrical forms,” says Gregory. In addition to the must-see exhibition, which is on view until October 28, the gallery is set to release a new book on Gregory’s career in 2023. —Geoffrey Montes 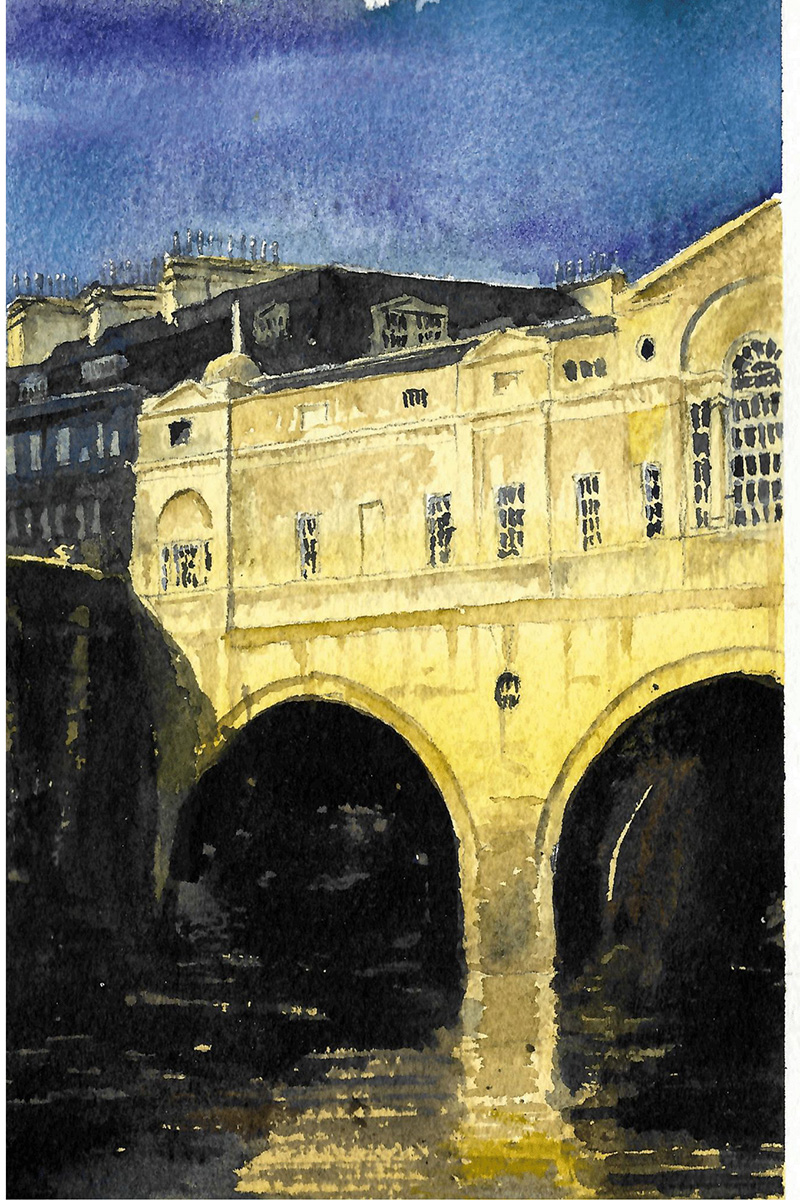 Born during the pandemic, painting circle Whisky Watercolor Club is hosting an official exhibition taking place in designer Katie Leede’s Sag Harbor store Katie Leede & Company. Featuring around 40 pieces of mesmerizing paintings made over the past two and a half years by top architects, including Anthony ‘Ankie’ Barnes, Michael Imber, Tom Kligerman, Steven Rugo, and Douglas Wright, the initial inspiration for these creations stemmed from their shared love of sketching, landscapes, and travel. From what started as an enjoyable hobby soon turned into weekly Zoom calls, and now an in-person exhibition. Profits from the show, which ends October 16, will go towards architectural nonprofit Lutyens Trust America as well as local environmental charity Peconic Land Trust. Additionally, this exhibition anticipates a special whiskey tasting event taking place on September 17. — Shelby Black 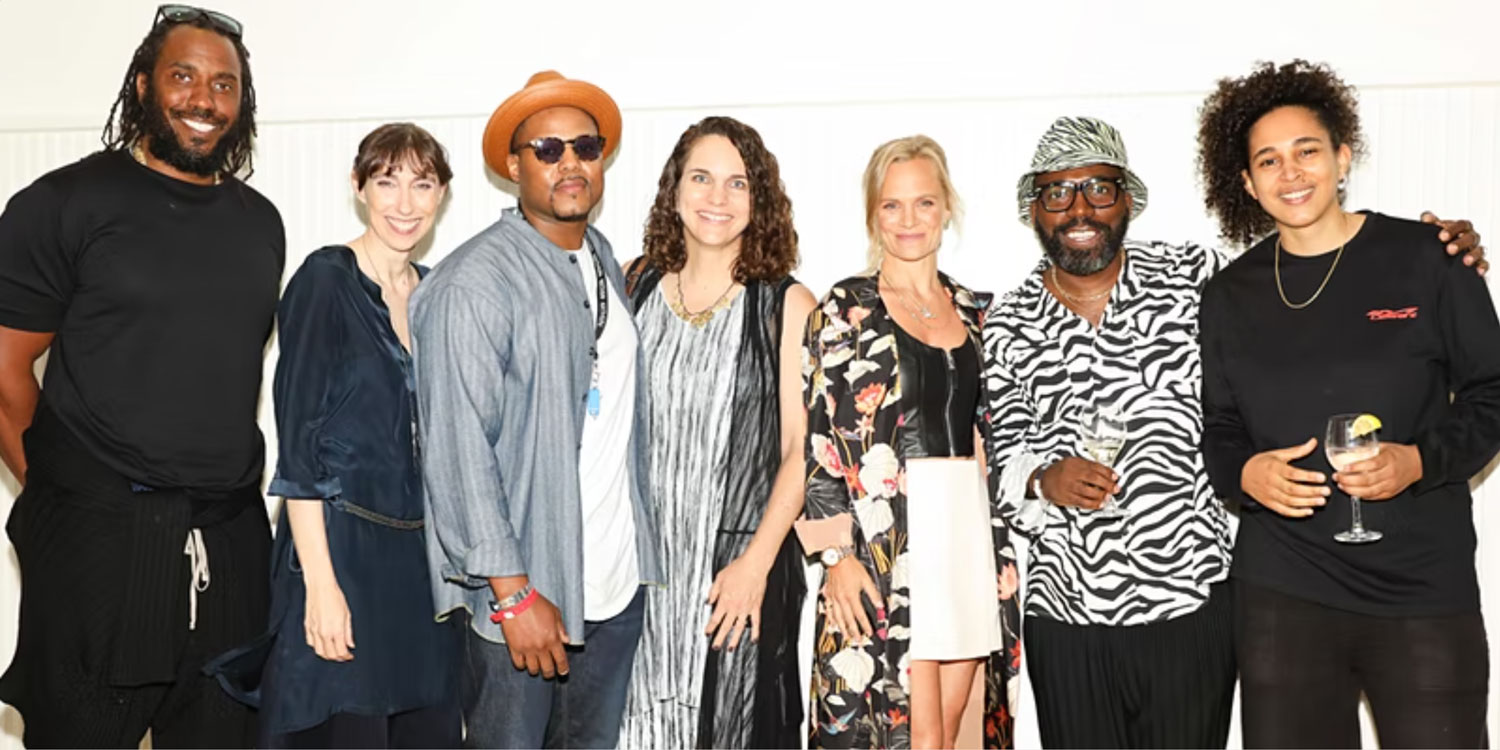 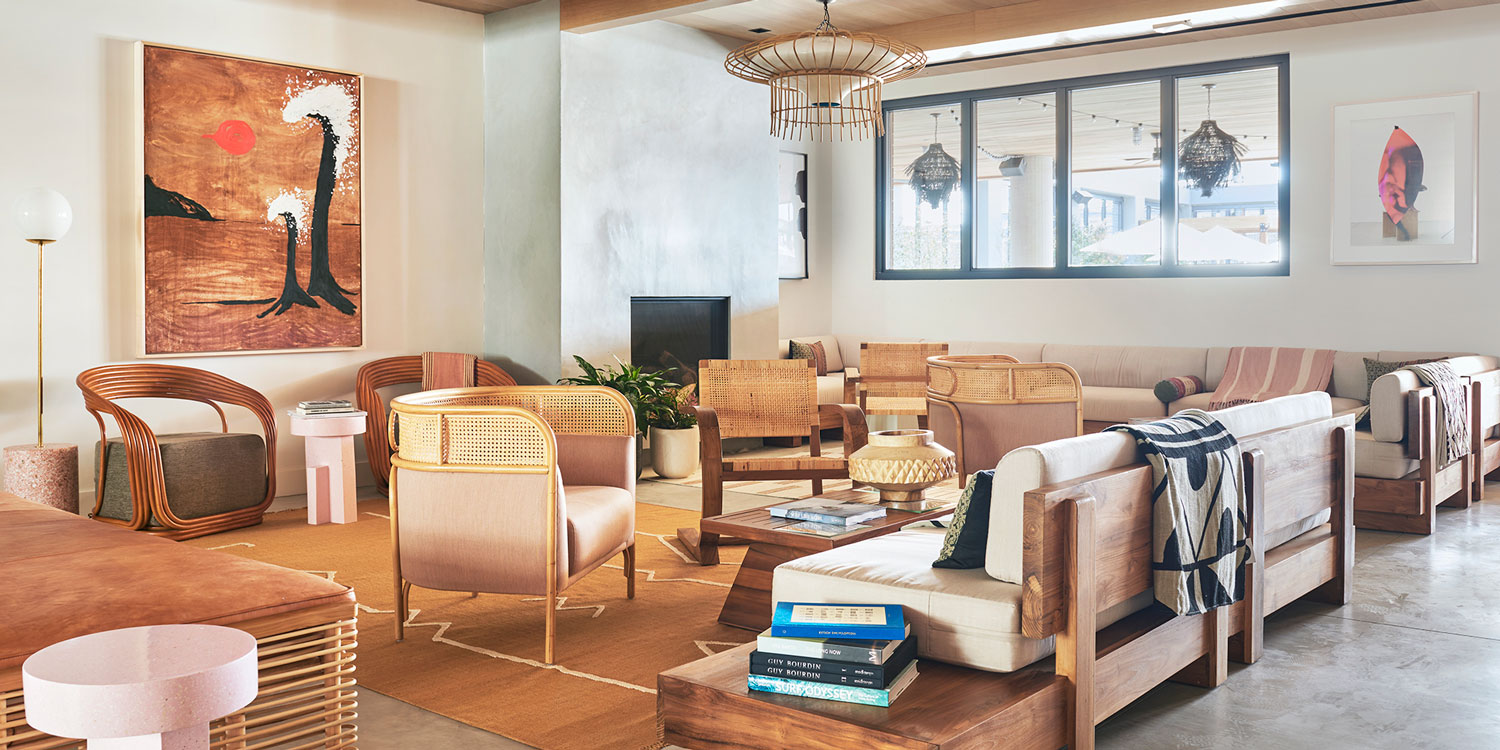 The Artists First Alliance, consisting of three organizations with a shared mission—Baxter St at CCNY led by Michi Jigarjian and Jil Weinstock, NXTHVN, founded by Titus Kaphar, and the Last Resort Artist Retreat, founded by Derrick Adams—have joined forces to launch a collaborative benefête this Friday, September 9. Hosted by Sarah Arison, Mickalene Thomas, and Suzanne McFayden at the art-filled Rockaway Hotel, the benefit will raise funds for each organization’s residency programs, supporting artists from historically marginalized backgrounds at all levels of their career. “My hope is that by celebrating together, we are not only able to raise more funds and awareness for all three organizations, but also that our communities uplift each other and an even larger, more vibrant ecosystem is formed through our collaboration,” states Michi Jigarjian, president of Baxter St at CCNY. The night will be filled with music by Chuck D featuring Black Thought, DJ sets from R&B duo Lion Babe and performances by Los Hacheros and the Acapulco Express. —S.L.