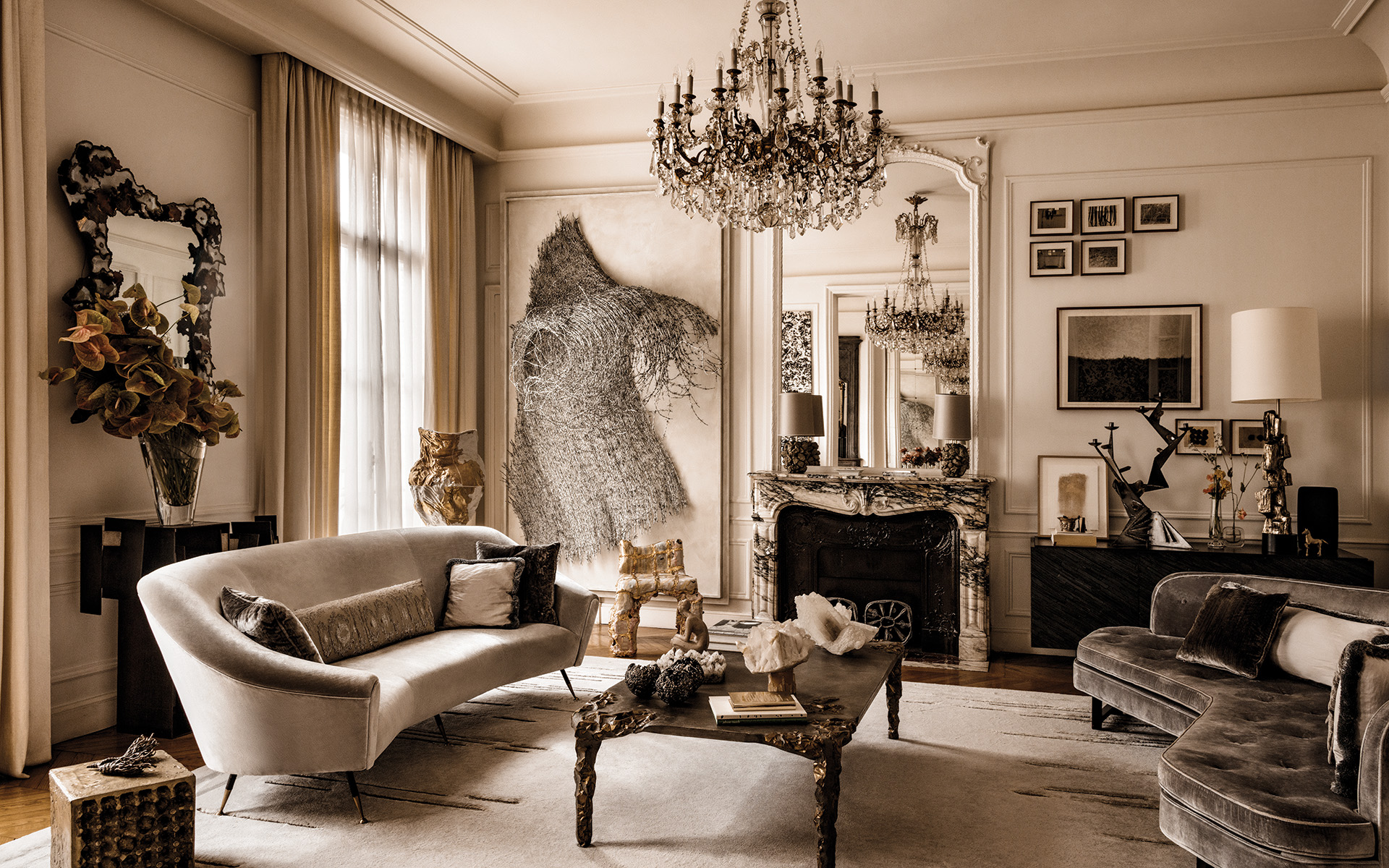 Known for her glamorous work for the Hôtel de Crillon and Le Jules Verne, the architect composes an art- and design-filled sanctuary in gradations of neutrals and shimmering metallics for her family 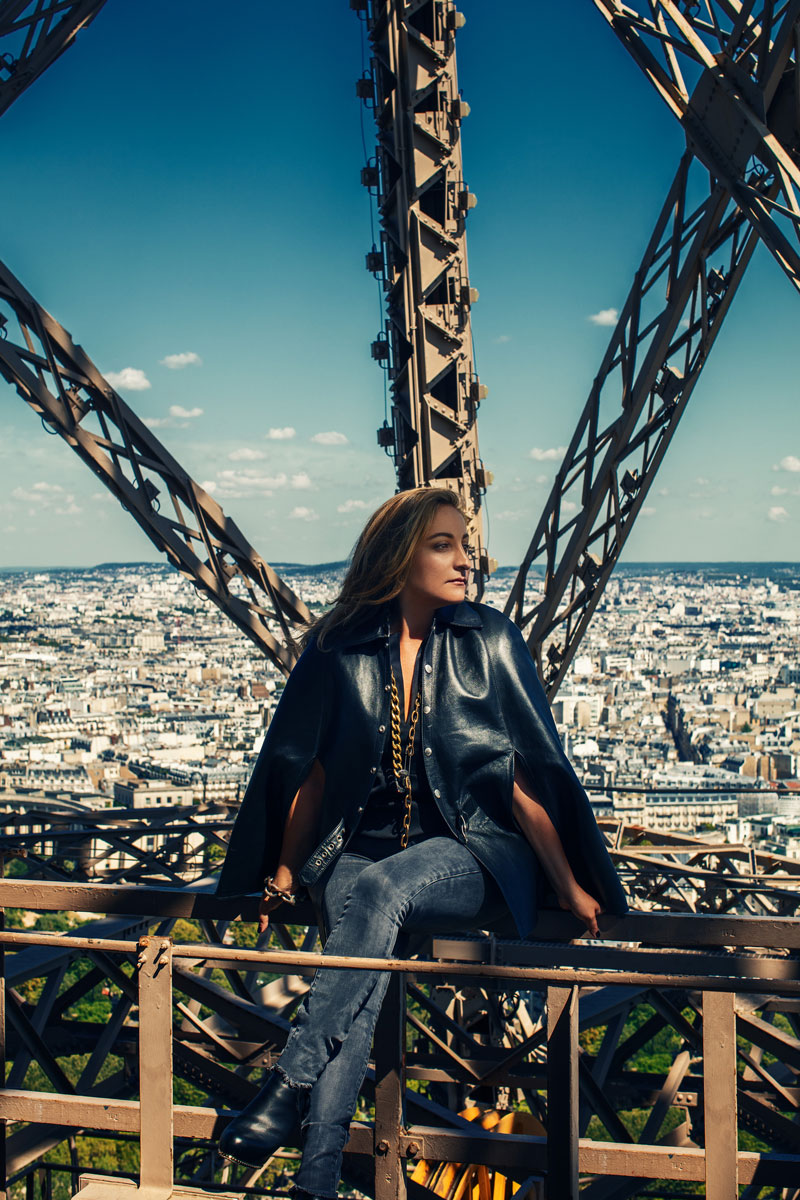 When architect and interior designer Aline Asmar d’Amman first laid eyes on what is now her Parisian home a decade ago, she knew immediately. “It took me five minutes to decide this was going to be our address in Paris,” she explains of the Haussmannian flat located in the 16th arrondissement, just a short walk from the Trocadéro and the Eiffel Tower across the Seine. “I fell in love with the building’s extraordinary 19th-century sculpted stone façade, the colossal wood door opening to the ground-floor courtyard, and the dramatic staircase leading with a noble swirl up to the private homes.”

Previously, the Tunisian consulate had been renting the space for receptions, and its rooms were awash in color and gilding with an Orientalist vibe. But the Lebanese-born d’Amman, founder of the firm Culture in Architecture, had a very different vision, one of white walls and accents of smoky, silvery, and pale sepia tones. “It was important to pay tribute to Paris, with its muted colors,” she says. “In this city, it’s all about textures and the gray sky, which became my theme.” 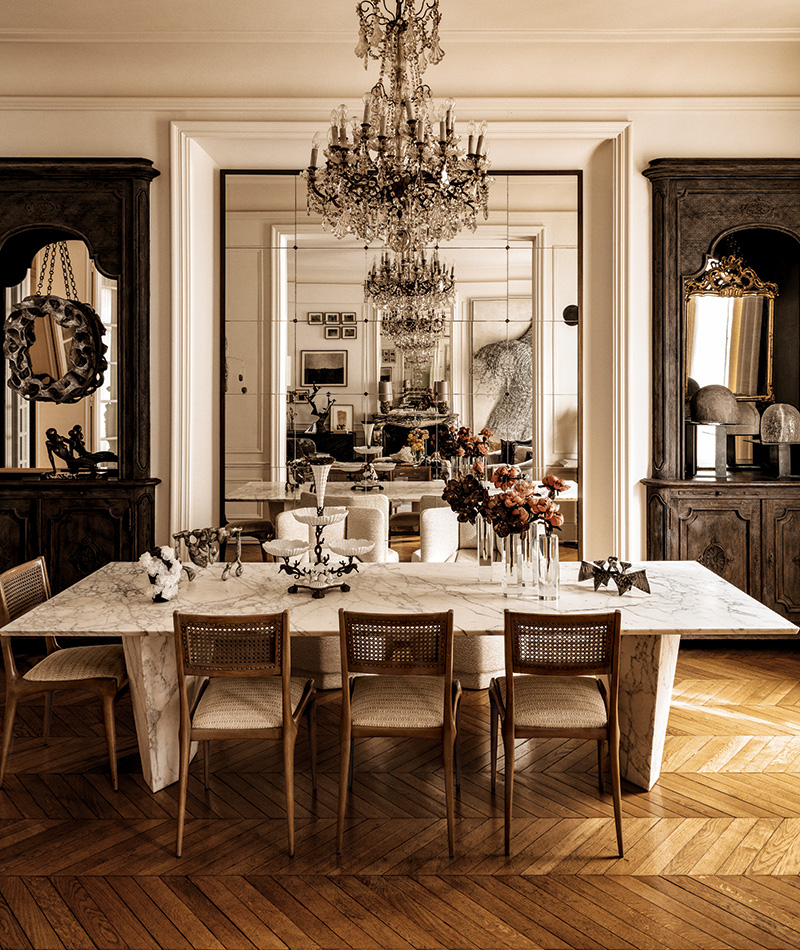 First d’Amman reconfigured the layout to enhance the sense of flow and create larger spaces tailored to family life with her husband and teenage sons. In addition to expanding the entry, salon, and kitchen—which doubled in size—she combined two bedrooms to make the primary suite. All of her changes respect the historic bones and spirit of the residence, while at the same time updating the rooms with a contemporary sophistication. 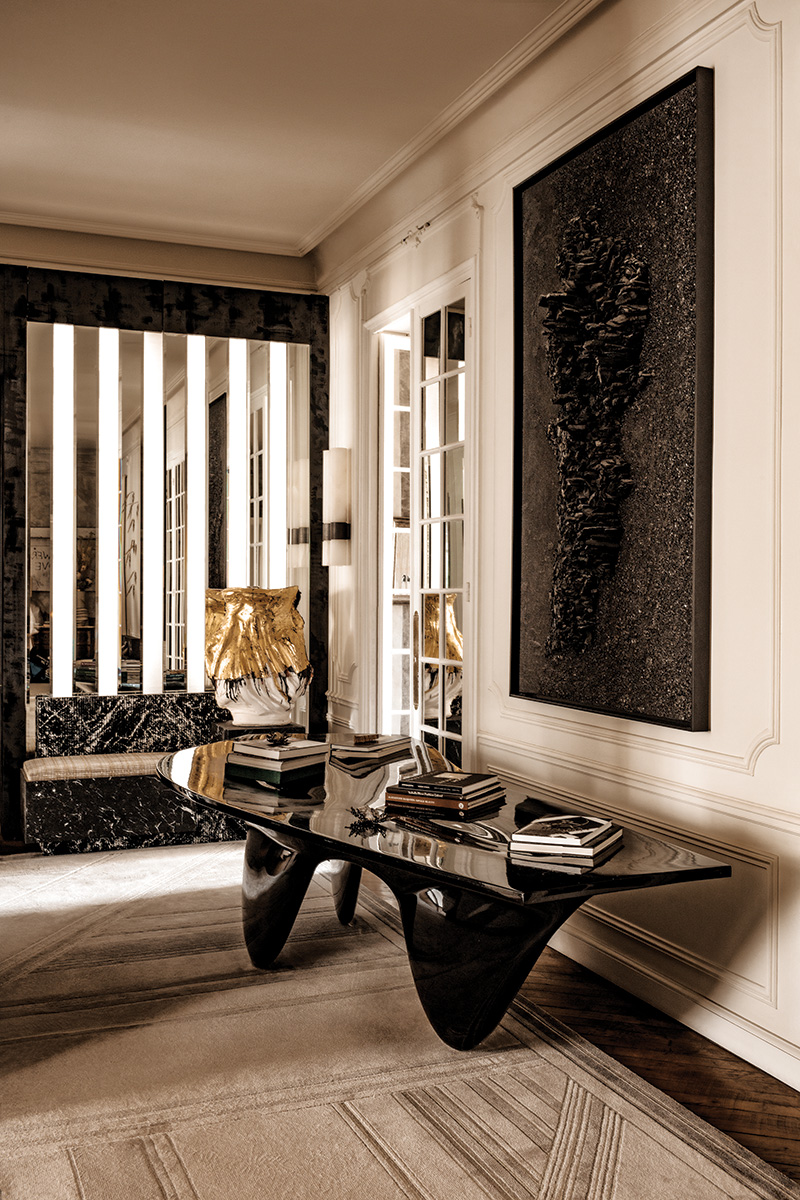 In the entrance hall, Zaha Hadid’s Aqua table stands beneath a work in charcoal by Marie Khouri; the gold-painted vessel is by Johannes Nagel, and the Tai Ping rug was designed by d’Amman. Photo: Matthieu Salvaing

Indeed, d’Amman has earned a reputation as an architect of evocative interiors that deftly connect past and present. Just look to her reimagining of two Paris landmarks—the Hôtel de Crillon and the Eiffel Tower restaurant Le Jules Verne—as well as her latest commission, the new Orient Express hotel, which occupies a 15th-century Venetian palazzo that will reopen in 2024 after a multiyear restoration. As with these high-profile projects, d’Amman’s Paris home reflects her flair for theatrical, seductive, poignantly resonant spaces.

Since the family moved in, d’Amman has continued to add new layers of design, art, and artifacts, transforming every inch into a personal portrait that, as she puts it, “speaks the language of emotional connections rather than rational compositions.” One of the first pieces to arrive was Zaha Hadid’s glossy black, fluidly sculptural Aqua table for the entry hall. “My husband was quite shocked, because the apartment was a completely white canvas at the time,” she recalls. “He said, ‘What’s this?’ And I said, ‘I have to live with it as much as I have to live with you.’ ” 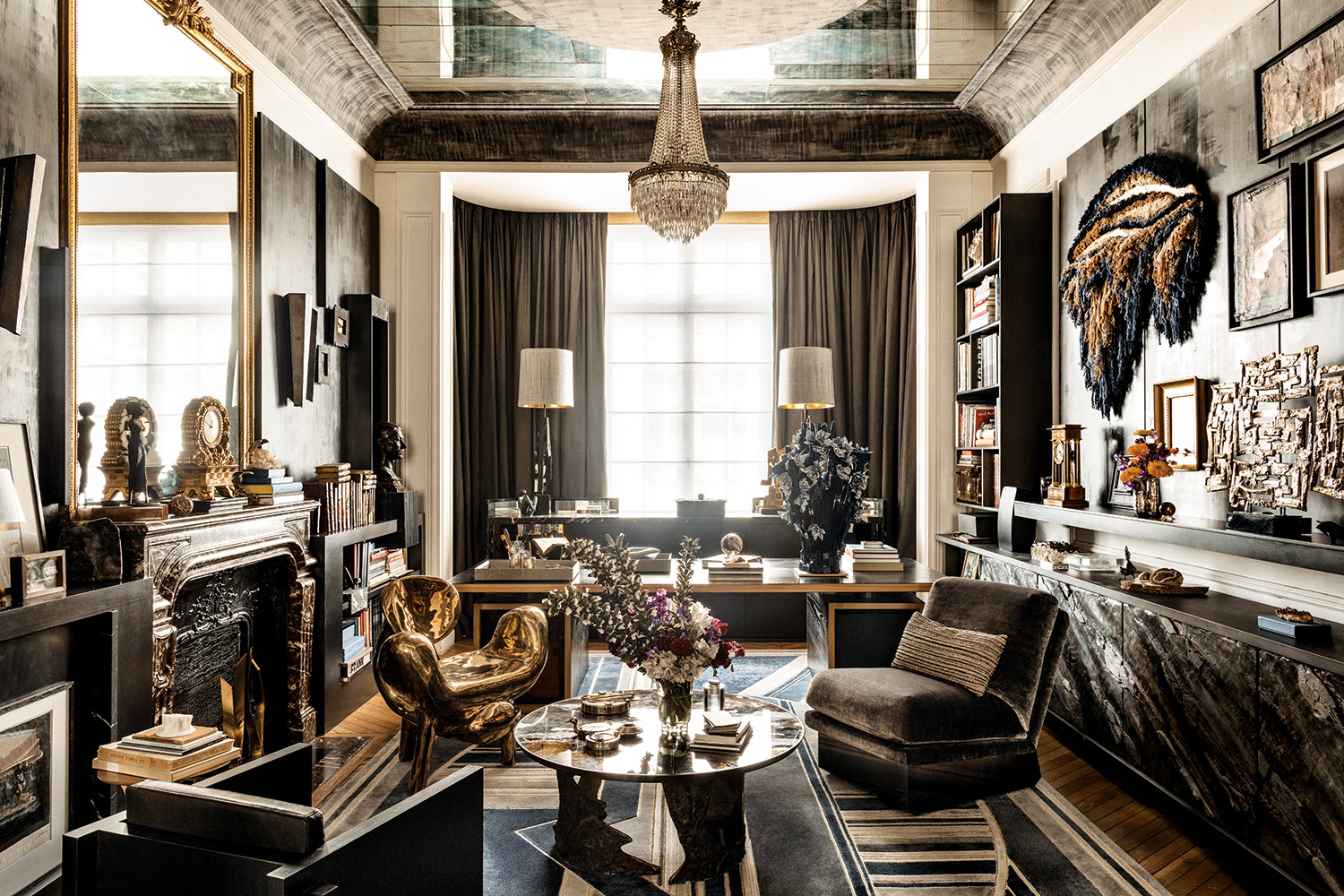 Eclecticism reigns in the library, where d’Amman installed a polished-bronze chair by Voukenas Petrides and a leather-cushioned wood lounge chair by Sizar Alexis around a table that combines legs found at a Paris flea market with a circular painted mirror top by Florence Girette. The Gent swivel slipper chair, clad in an Antoine d’Albiousse velvet, is from d’Amman’s new suite of designs from the Invisible Collection. The Jean Nouvel desk is topped by a Tadeas Podracky sculptural vase, the mantel clock was created for the International Exhibition of Decorative Arts in 1925, and the tapestry on the opposite wall is by Fowler-Thelen. The rug is a d’Amman design made by Tai Ping. Photo: Matthieu Salvaing

The couple’s collections are highlighted by female talents such as Alicja Kwade, Claire Adelfang, and Marie Khouri, with many of the works balancing a kind of material rawness with refined, lyrical expression. It’s a sensuous dance that d’Amman loves, and the resulting effect is a glamorous yet fierce beauty.

In the salon, a barbed wire sculpture by Abdul Rahman Katanani crests off the wall in a whirl of suspended energy. The architect commissioned the piece during COVID lockdowns, almost ten years after first seeing the artist’s work at an art fair. “It looks like an haute couture dress, because it is woven in a way that is incredible,” she observes. In front of it sits another pandemic-era acquisition: a pink-and-gold ceramic chair with flowers by Katie Stout. “I love how Katie plays on wrecked femininity and that the piece has a very irrational aesthetic,” says d’Amman. “It’s a combination of Salvador Dalí and Niki de Saint Phalle.” 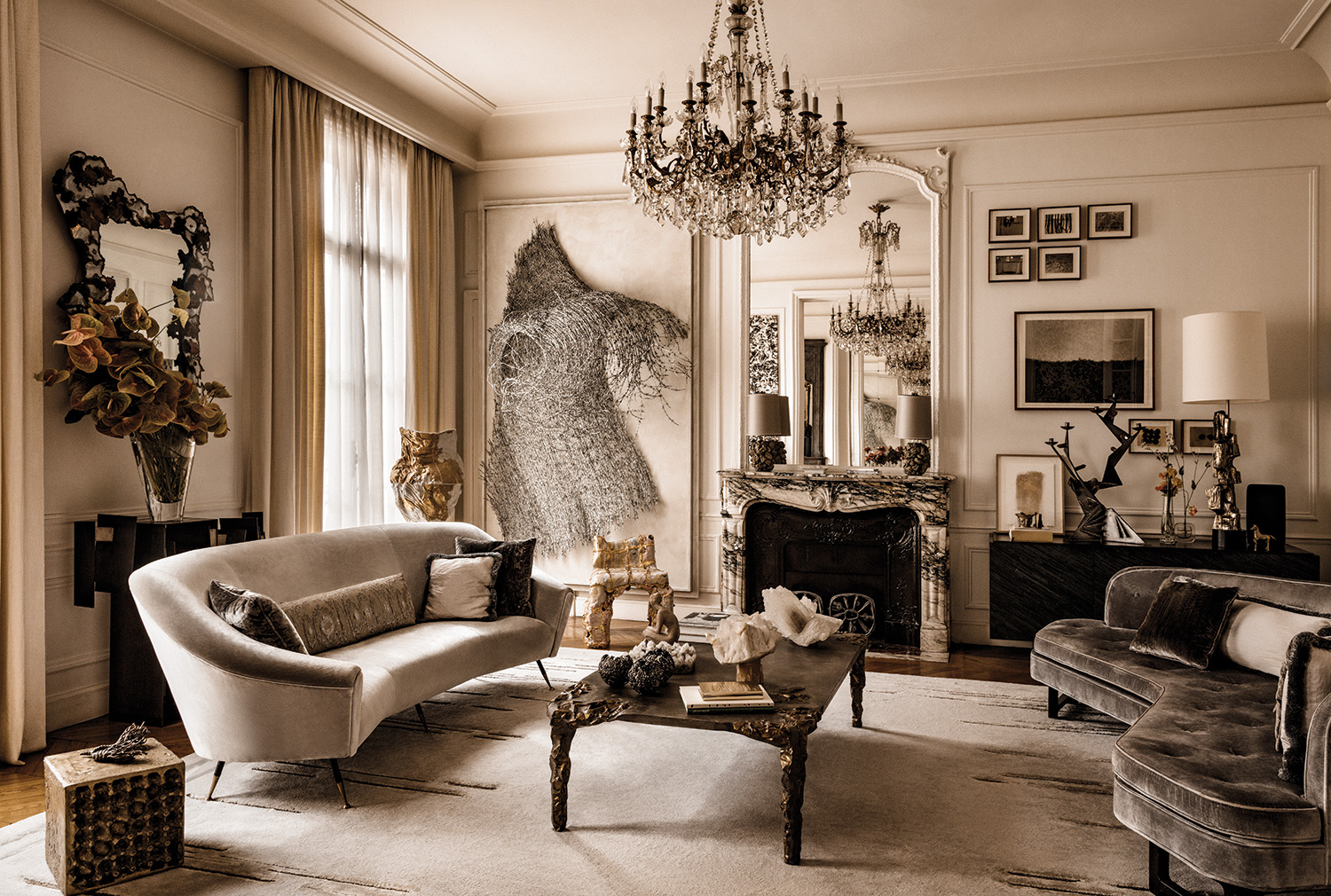 For her Paris home, architect Aline Asmar d’Amman commissioned Abdul Rahman Katanani’s swirling barbed wire wall sculpture for the salon, where it overlooks a vessel by Johannes Nagel and a Katie Stout ceramic chair. Beneath the room’s original late-19th-century chandelier, sofas by Ico Parisi (left) and Edward Wormley face a Mathilde Penicaud cocktail table, while an heirloom Baccarat vase filled with flowers by Debeaulieu accents a console next to a vintage Italian torch-cut metal mirror. The silk and metal rug is d’Amman’s design, made by Pinton. Photo: Matthieu Salvaing

That kind of irreverent mix of art and objects runs through the home, creating unexpected dialogues at every turn. “I rely on intuition and instinct as a guide to just embrace things that I love and live with them together,” says d’Amman.

In the library, which doubles as an intimate party room, she clad the walls in charcoal panels, a modern riff on classic French boiserie, and installed dusky slate and marble cabinets, one containing a concealed bar. She placed a velvet-upholstered swivel chair—also of her own design and one of the new pieces in her offering with the Invisible Collection—opposite a contrasting cast-bronze armchair by Voukenas Petrides. Adding to the eclectic mélange are a mantel clock made for the International Exhibition of Decorative Arts in 1925 and family heirlooms, including her husband’s family tree dating from the 1300s and his great-aunt’s Art Deco chandelier. The Jean Nouvel desk, meanwhile, “brings an unexpected sleekness into an ornamented kind of space,” d’Amman notes. 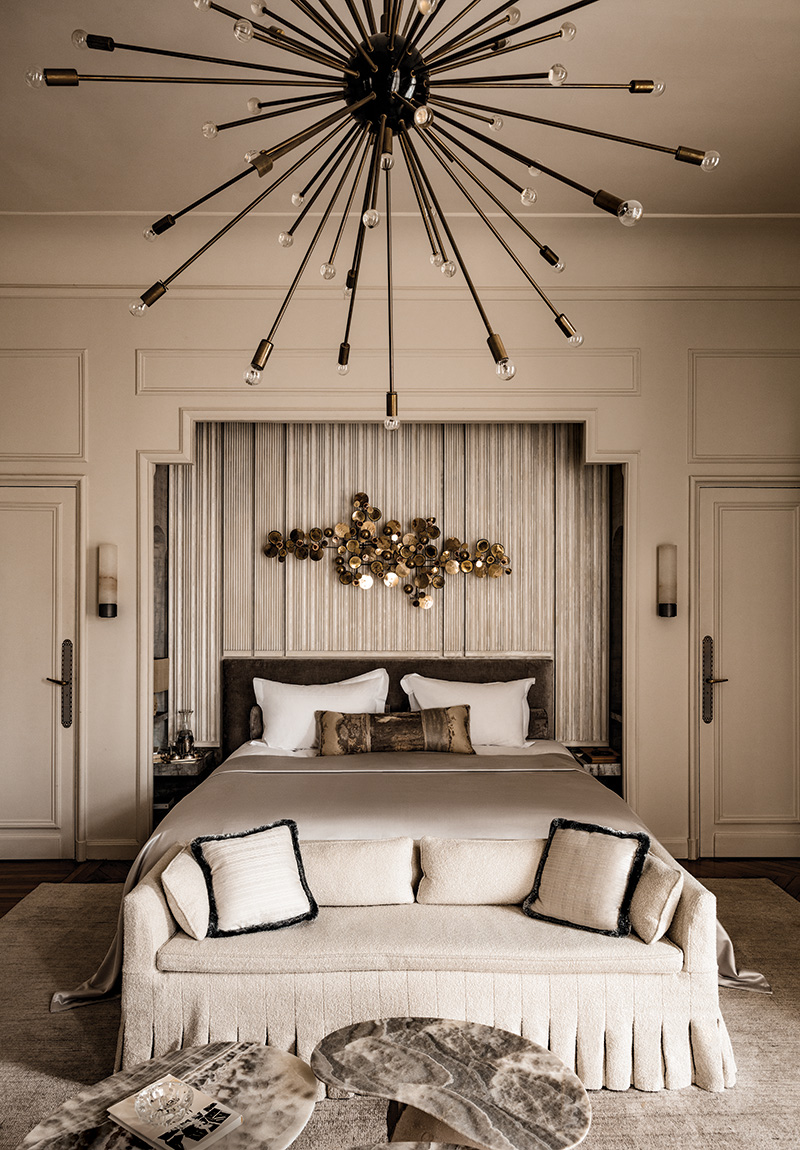 In the primary bedroom, alabaster-and-steel sconces designed by d’Amman flank a Curtis Jeré sculpture above the custom-made bed, which features a headboard upholstered in Jim Thompson silk velvet and is dressed with a coverlet of Fox Linton silk and Pierre Frey linen. A vintage Italian Sputnik chandelier floats above a sofa and d’Amman’s Stone Cloud tables from the Invisible Collection. Photo: Matthieu Salvaing

Contrasting starkly with the library’s deep palette is the primary bedroom, a study in pale neutrals, and d’Amman’s dressing room, which is anchored by another of her designs from the Invisible Collection: a trio of Georgia lounge seats (inspired by the art of Georgia O’Keeffe), their sensual shapes upholstered in blush-hue mohair. The area also functions as d’Amman’s home office, doubling as a place for her to write letters and compose her flawless outfits, which of course calls for a mirrored ceiling. 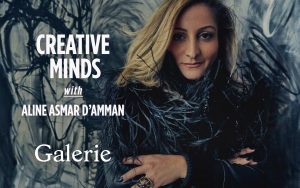 “Mirrors on the walls and on the ceiling and on top of mirrors—I like the sexiness of a fractal image,” says d’Amman, who used reflective surfaces to shimmering, beguiling effect throughout. “I believe that home is not only your sanctuary but also your own theater”—whether a theater for hosting 100 guests for cocktails or an intimate seated dinner around her Calacatta Oro marble dining table. Notably, that table is topped by a three-tier centerpiece from Sotheby’s sale of works owned by Karl Lagerfeld, with whom d’Amman collaborated on two suites at the Crillon and a furniture collection for Carpenters Workshop Gallery. “In every room, there’s a sense of celebration and a bit of theatricality, because this is who I am,” she says. “I love the wow effect.”

A version of this article first appeared in print in our 2022 Fall Issue under the headline “Tone Poem.” Subscribe to the magazine.