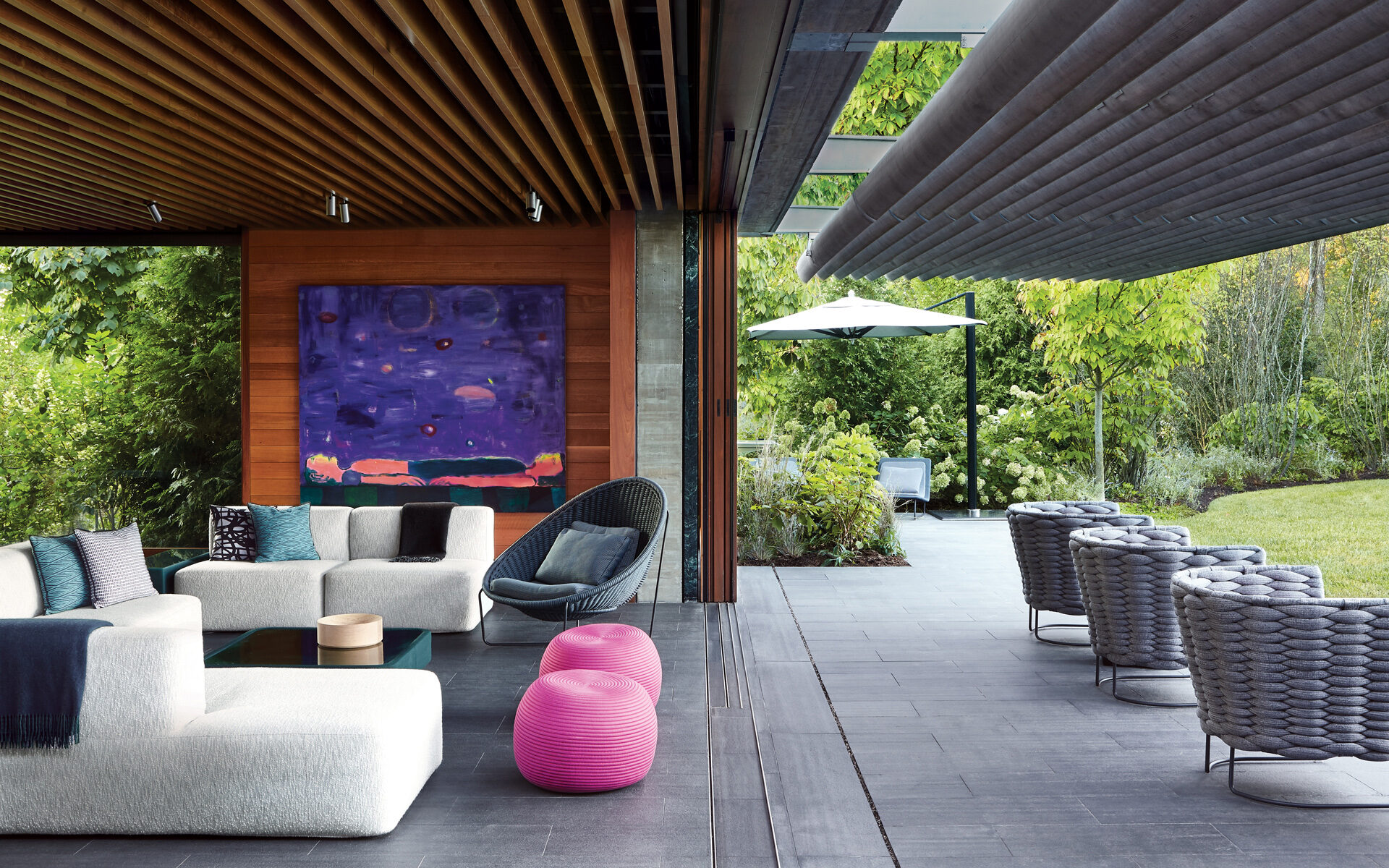 Several years ago, a St. Louis couple with two young daughters and a growing art collection recruited a dream team to build their dream house. Like many highly imaginative plans, this one took some challenging turns—a devastating one, actually—before the vision was ultimately realized. First to come on board the project was celebrated landscape architect Michael Van Valkenburgh, who is based in New York and Cambridge, Massachusetts. The couple had met him when he won a competition to revamp the park surrounding St. Louis’s Gateway Arch, the iconic riverfront monument designed by Eero Saarinen. He was joined by a longtime collaborator, Peter Rose, the Boston architect and prominent Harvard University educator whose firm has handled everything from museums and symphony spaces to cutting-edge coastal retreats. The couple discovered their interior designer, Heather Wells, in a magazine, admiring her work on a townhouse that sensitively melded inviting furnishings with contemporary art. 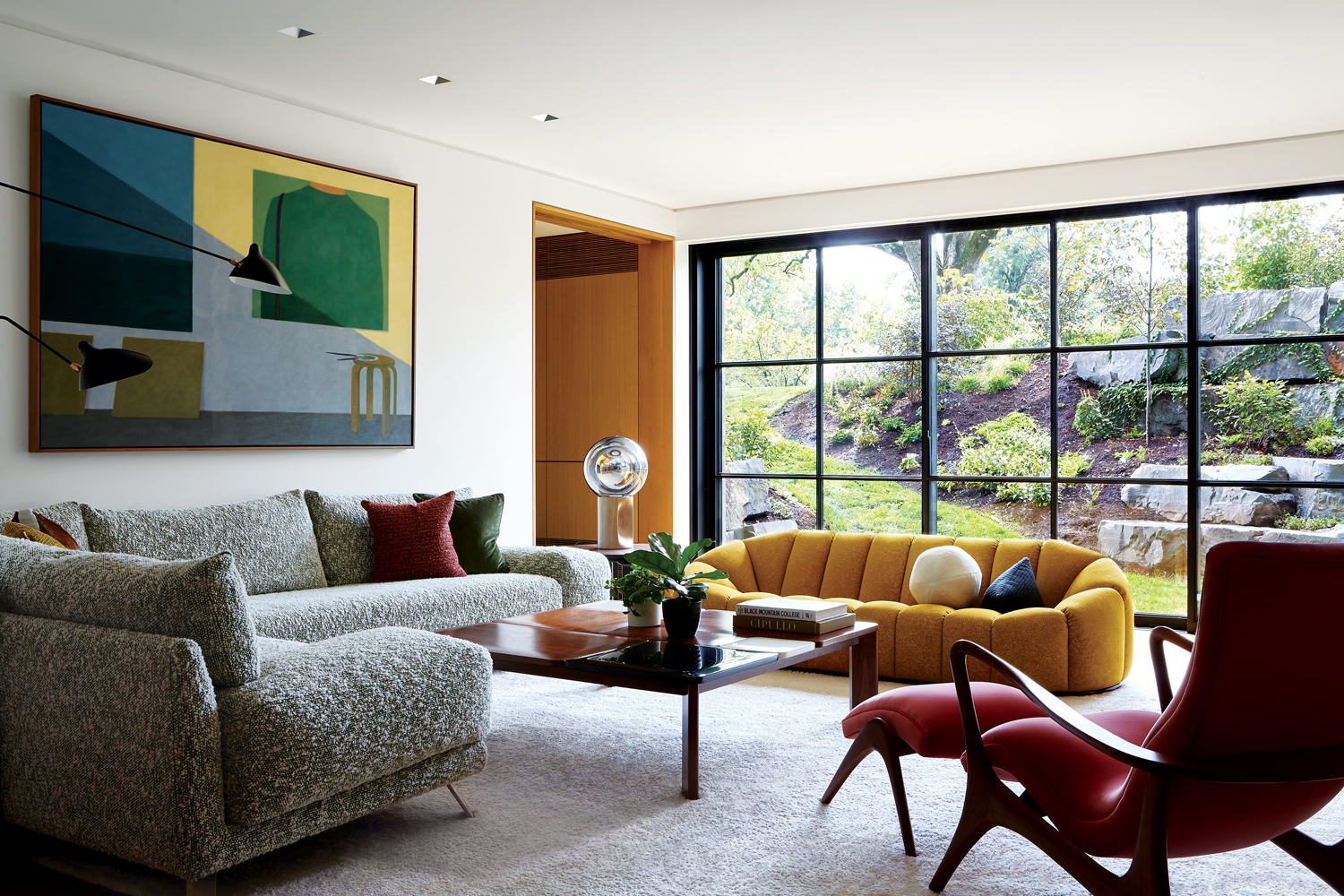 In the lower-level lounge, Wells grouped a mustard-hued Pierre Paulin sofa and an India Mahdavi cocktail table, both from Ralph Pucci, with a Christophe Delcourt sectional sofa and a Vladimir Kagan lounge chair and ottoman; a Henni Alftan painting hangs between a Serge Mouille two-arm sconce and a Usona table lamp. Photo: Joshua McHugh

The wife, who is American, has always favored the kind of traditional homes she grew up in. Her British husband, however, is a flat-out modernist with adventurous tastes in art. “I think they hired us,” Rose says, “because we talked about the connection, or disconnection, between these two impulses, the modernist and the historicist. They thought we might be able to manage that kind of complexity.”

What emerged was a sophisticated, 18,000-square-foot, six-bedroom house sheathed in handmade Danish brick and topped with classical slate roofs. The more progressive interiors feature sculptural staircases, an intriguing variety of ceiling heights, ample white walls finished in Japanese shikkui plaster, and steel-framed glass walls that provide sweeping views of the surrounding five-acre property, which Van Valkenburgh manipulated to create a landscape of small, undulating hills. “There are rooms that may look quite ordinary,” Rose explains, “but when you’re in them the space is almost infinite because it extends out into these extraordinary external spaces.” 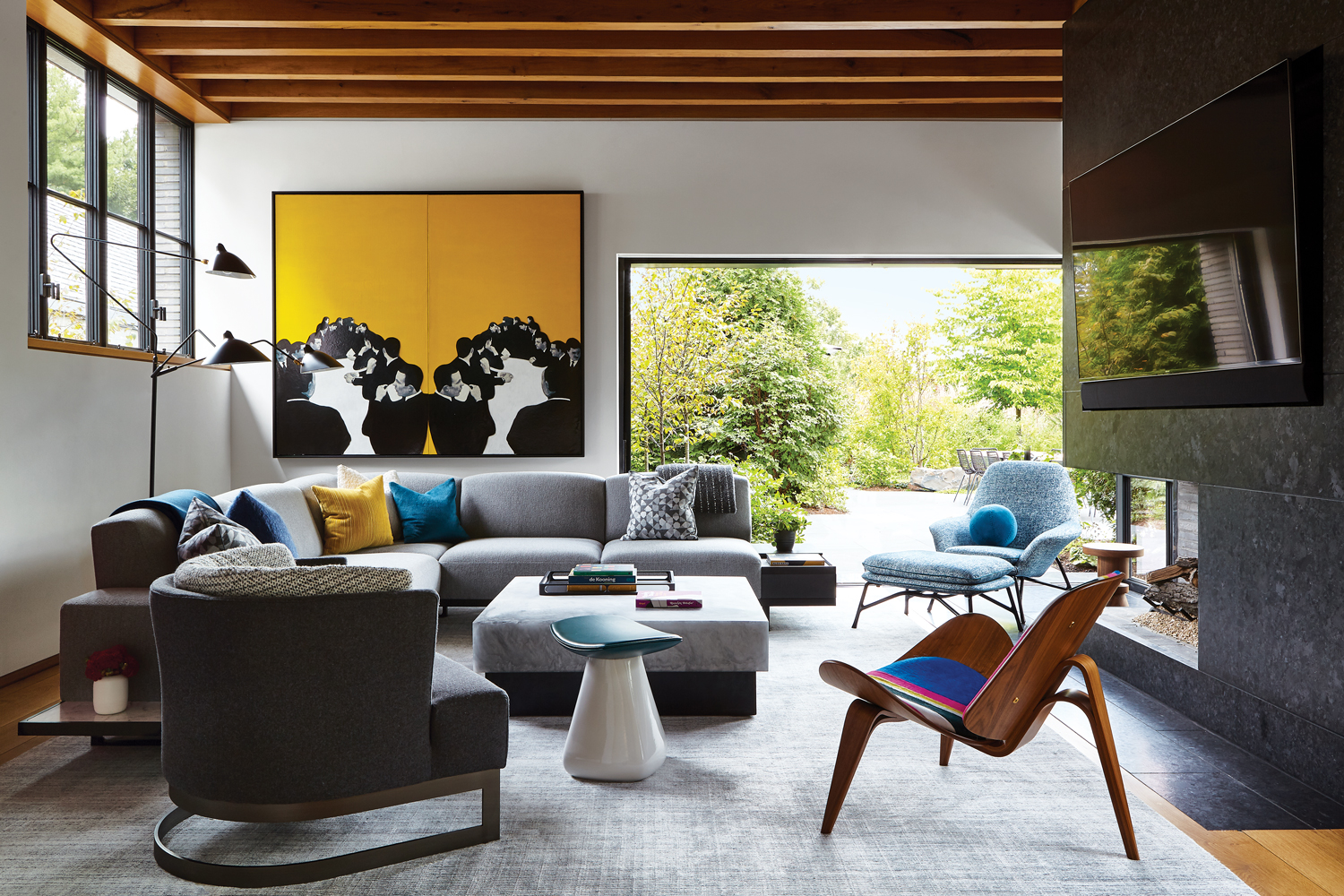 In the family room, a sectional sofa, a Marcel Wolterinck barrel-back chair, and a Christophe Delcourt stool are arrayed around a Martha Sturdy table with a Carl Hansen three-legged chair and an armchair and ottoman by Minotti; the painting is by Rosalyn Drexler. Photo: Joshua McHugh

A month before completion, however, a fire broke out in the house and burned over the course of a day. That evening, the couple sipped stiff drinks on their lawn and, as the husband recalls, “watched the end of what we thought was a dream.”

“Everything is really soft to the touch. I love a house that looks like you can sit anywhere even if there’s a formality to it”

Fortunately, none of the furnishings or artworks had been installed. Also spared was the breathtaking pool house compound, an indoor-outdoor haven comprising concrete walls inset with richly veined Vermont Verde Antique stone, green roofs planted with feathery prairie grasses, and expansive terraces shaded by an Alaskan cedar brise-soleil with banana-shaped fins. After everyone sufficiently recovered their equilibrium, the family decided to move into the pool house while the team rebuilt the main house on the same footprint, an effort that required two more years. 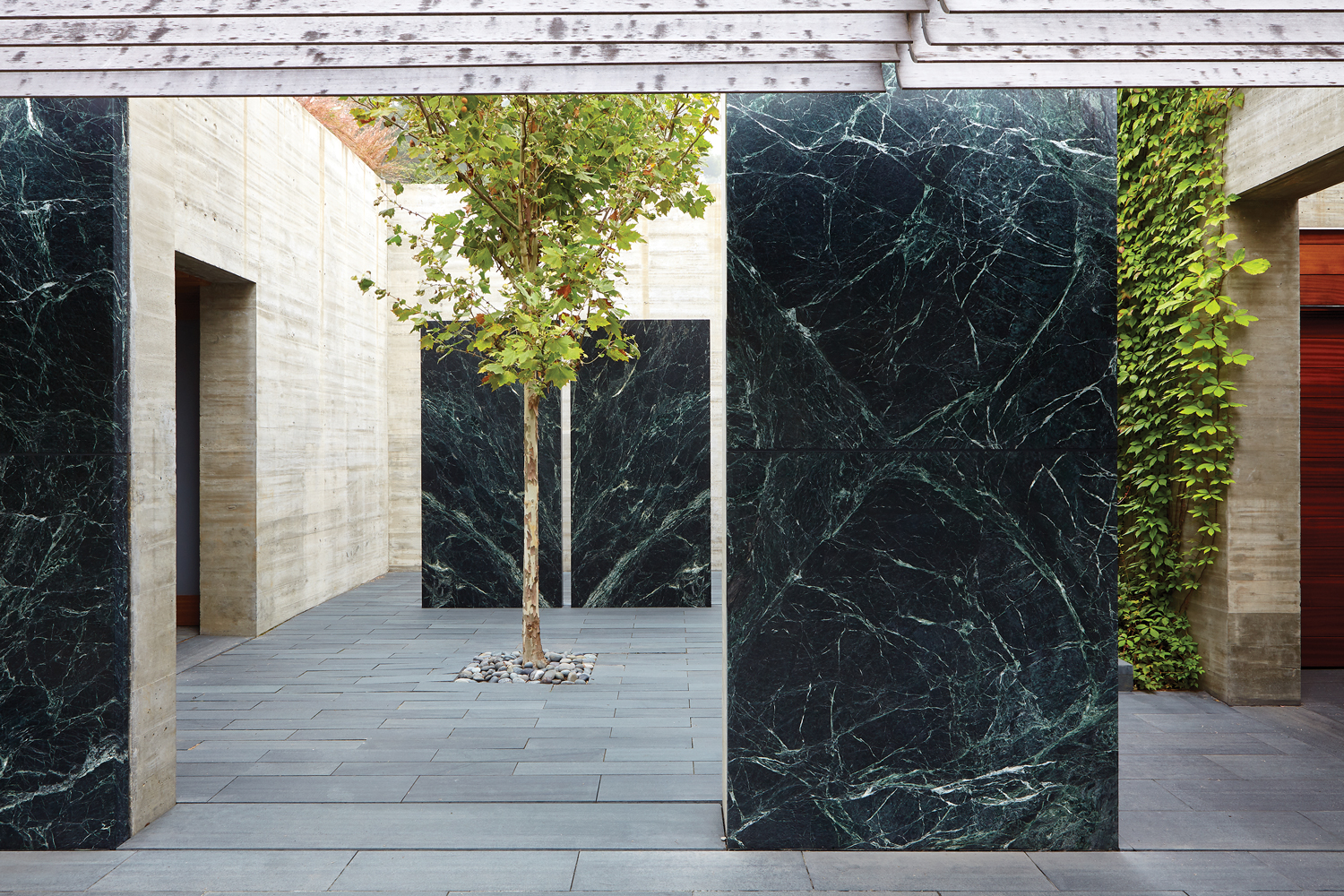 The concrete façades of the pool house buildings are inset with expanses of Vermont Verde Antique stone from Marmi. Photo: Joshua McHugh

If anything, the extra time allowed the team to refine and elevate their vision. Rose made a few tweaks to the interior spaces, while Wells focused on perfecting the decor. In the final scheme, she deployed spectacular light fixtures by Mathieu Lehanneur, Niamh Barry, Lindsey Adelman, and Drift to help animate the rooms, while emphasizing sculptural, often colorful furniture, such as the lower-level lounge’s mustard-yellow Pierre Paulin sofa, the living room’s Vladimir Kagan Wysiwyg chairs, and the Paola Lenti armchairs and poufs in the pool house. Fabrics are textured and sumptuous. “Everything is really soft to the touch,” Wells says. “I love a house that looks like you can sit anywhere even if there’s a formality to it.” 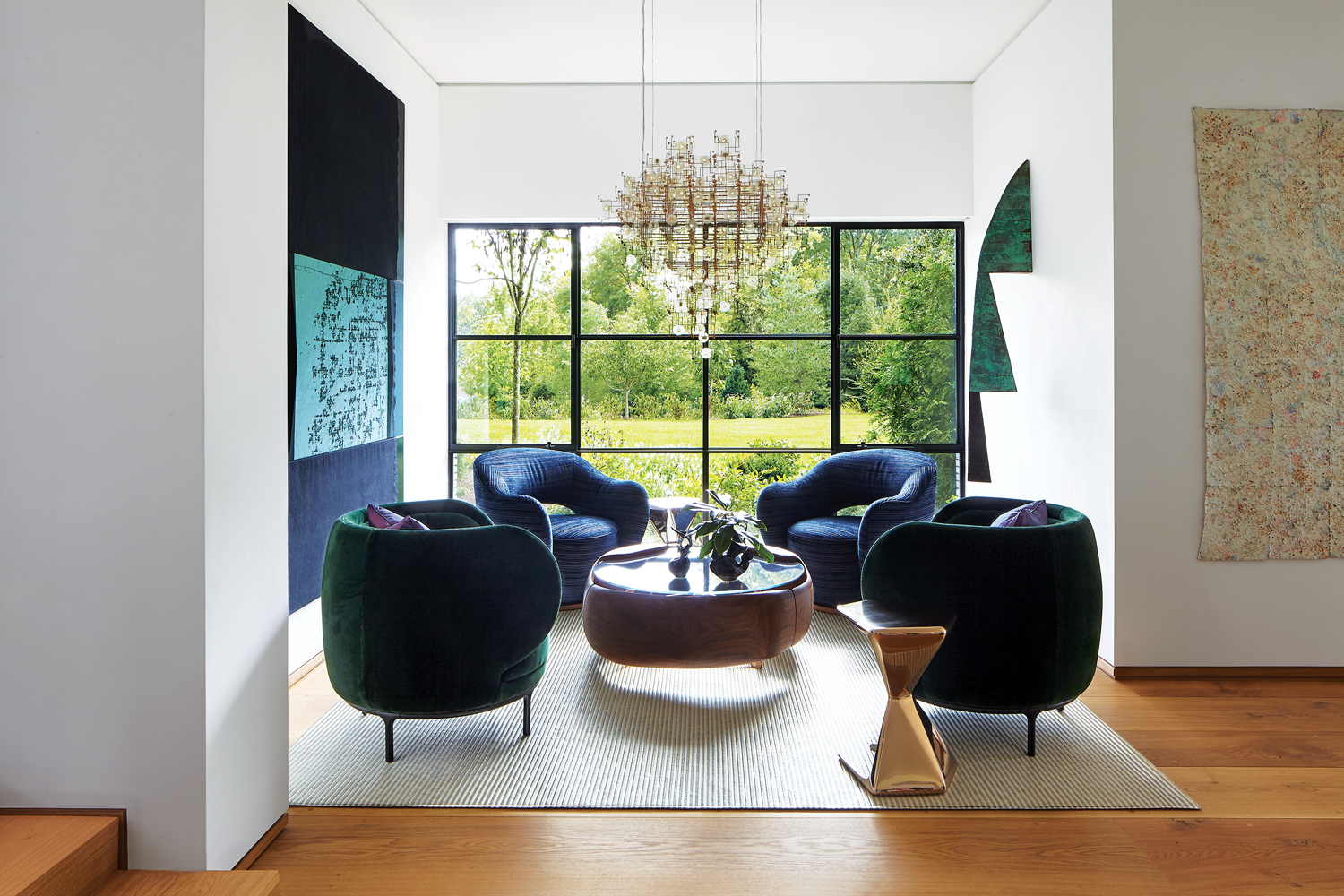 Wells installed a Drift light sculpture in a living room sitting area furnished with a pair of chairs by Vladimir Kagan (next to the window) and another set by Jaime Hayon around a Caste cocktail table; the painting on the left wall is by N. Dash, and the rug is by Hechizoo. Photo: Joshua McHugh

Working with curatorial and art advisory firm Goodman Taft, under leadership of Abigail Ross Goodman and Molly Epstein, the couple continued to bolster their collection. The result is a compelling mix of works that is thoughtful yet uninhibited and totally of the moment in its showcasing of women and artists of color. The soaring entry is hung with paintings by Glenn Ligon, Pat Steir, and Sarah Sze. A freewheeling abstract painting by Charline von Heyl adds an exhilarating note to the library, while a Lynda Benglis wall sculpture presides over the dining room’s sprawling Rick Owens table, along with large-scale paintings by Jack Whitten, Tauba Auerbach, and Erin Shirreff. A work by Katherine Bradford brings colorful verve to the pool house, adding to its fun weekend retreat vibe.

“There are rooms that may look quite ordinary, but when you’re in them the space is almost infinite because it extends out into these extraordinary external spaces” 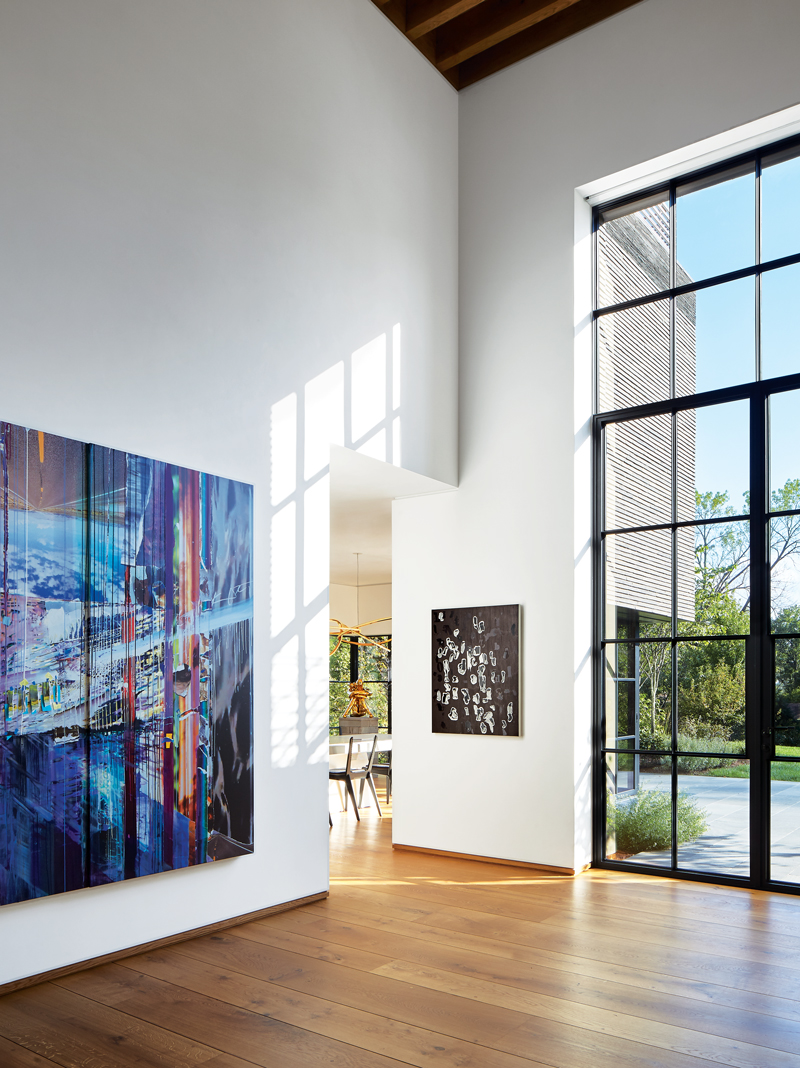 One side of the soaring entrance hall features a large Sarah Sze painting, and a work by Glenn Ligon hangs on an adjacent wall. Photo: Joshua McHugh

In explaining the couple’s art choices, the husband notes that he lives in a house full of women and was raised by a single mother. “Feminism is definitely part of our collection,” he says. “And we have also given deep thought to Black artists and emerging artists. We want to bring up our daughters so that they really understand our histories. We want to ensure that they walk into their future with a good understanding of all those artists who have significantly brought about change.” He adds that St. Louis is a microcosm of America today, “wrestling with its future,” as he puts it. “All of that is reflected in how we collect art.”

A version of this article first appeared in print in our 2022 Spring under the headline “Outside the Lines.” Subscribe to the magazine. 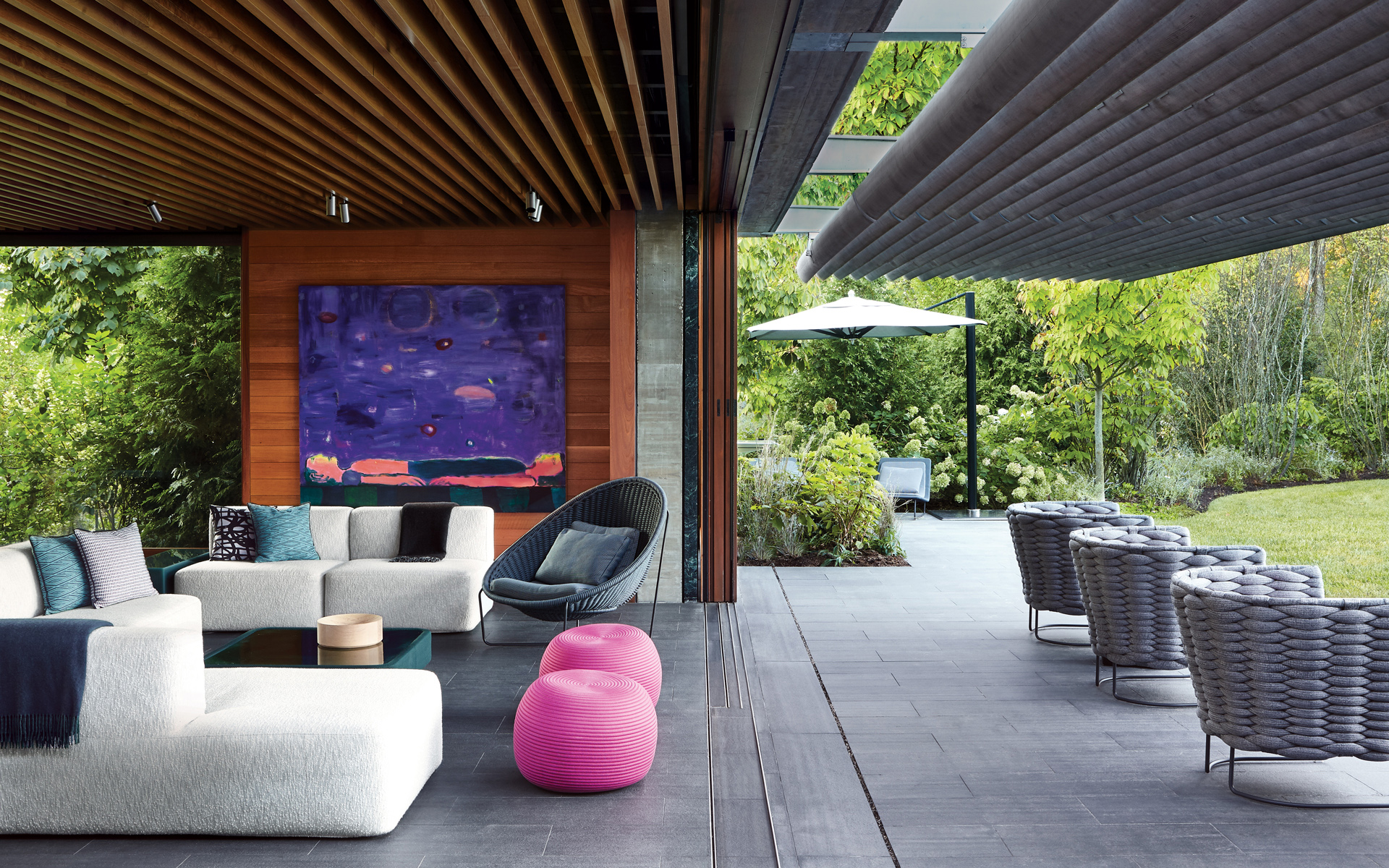