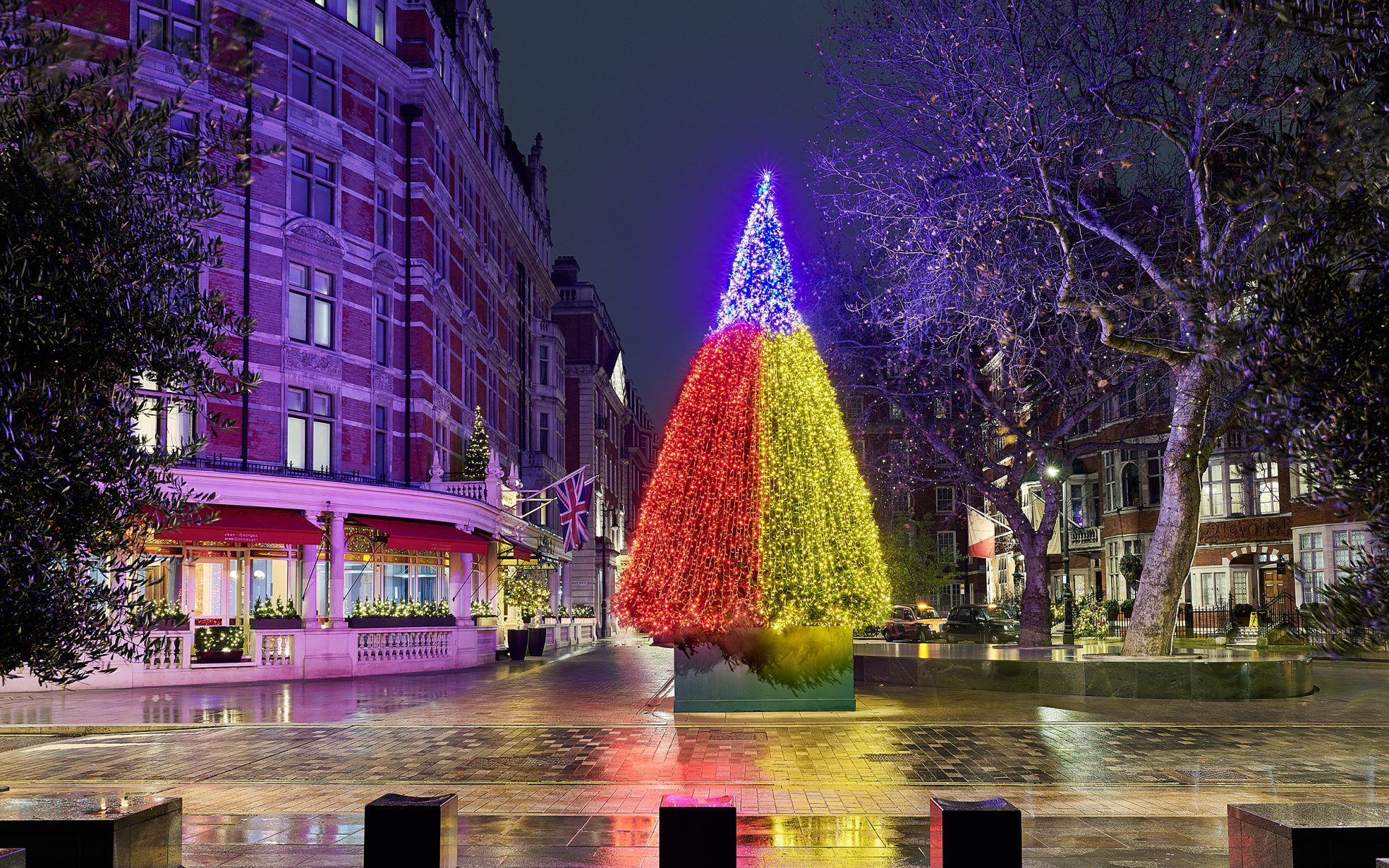 The esteemed talent is the latest in a tradition that has included Damien Hirst, Antony Gormley, and Tracey Emin

Anyone making their way along Mount Street in London’s posh Mayfair neighborhood are surrounded by the festive holiday decorations adorning the historic buildings that encircle the celebrated Tadao Ando fountain, Silence. But standing brightly in the center of it all is a colorful beacon unlike the other seasonal trimmings—the gleaming red, blue, purple, and yellow Christmas tree designed by acclaimed Irish-born artist Sean Scully for the nearby Connaught hotel. “We have had a personal friendship with Sean for 20 years and are so honored that he agreed to add his magical touch to our precious Christmas tree this year,” says the Connaught hotelier Paddy McKillen. “I hope his tree will be enjoyed by our guests, Mayfair neighbors, and indeed all of London as we count down to Christmas.”

Recommended: We Go Inside the Studio of Sean Scully Ahead of His Hirshhorn Show

The nine-foot-tall Norway spruce, which will be on display through January 2020, has been covered in 25,000 lightbulbs in a grid of primary colors similar to the abstract works that dominate much of Scully’s oeuvre. “It’s a Suprematist Christmas tree wearing a starry magician’s hat,” says the artist, whose work was recently displayed in an Almine Rech exhibition at Pablo Picasso’s former studio at Château de Boisgeloup, in Normandy, France. (Scully’s work will next be on view in the exhibition “Sean Scully: The Shape of Ideas” at the Philadelphia Museum of Art, opening May 14, 2020.) Damien Hirst designed this Christmas tree outside the Connaught in 2015. Photo: Courtesy of The Connaught

Scully is the latest in a string of talents who have chosen the design of the Connaught’s holiday tree. Over the past five years, celebrated artists Damien Hirst, Antony Gormley, Tracey Emin, and Michael Craig-Martin have also decorated a Christmas tree on the plaza. Emin’s minimalist 2017 version featured an original poem written in neon, while Gormley left the branches bare and tightly wrapped the trunk in vivid white lights to create one piercing illuminated column.

Artist Craig-Martin, who is represented by Gagosian, chose to cover the tree from top to bottom in a series of changing jewel-colored lights that mirror the richly saturated shades he uses in his paintings and sculpture. Hirst, who decorated the tree in 2015, skipped the lights, instead using all-white ornaments, which upon close inspection were revealed to be pills and medical devices in a symbolic message of the hope that science can bring to the world. The artist-designed tree is just one element of the Connaught’s holiday festivities, which will also include special seasonal menus at the Michelin-starred restaurant Hélène Darroze at the Connaught, recently revamped by Pierre Yovanovitch, as well as at the on-site Jean-Georges Vongerichten eatery overlooking Mount Street.

Beyond the Christmas season, the hotel has a long-standing history with art and design. Notable designers such as India Mahdavi and David Collins have cultivated impeccable spaces within the five-star resort, which also has more than 3,000 pieces in its art collection, including works by Julian Opie, Louise Bourgeois, and Barbara Hepworth. Tracey Emin covered a 30-foot Norway spruce in a poem of neon script, while the angel topper was a tribute to her late mother. Photo: Courtesy of The Connaught