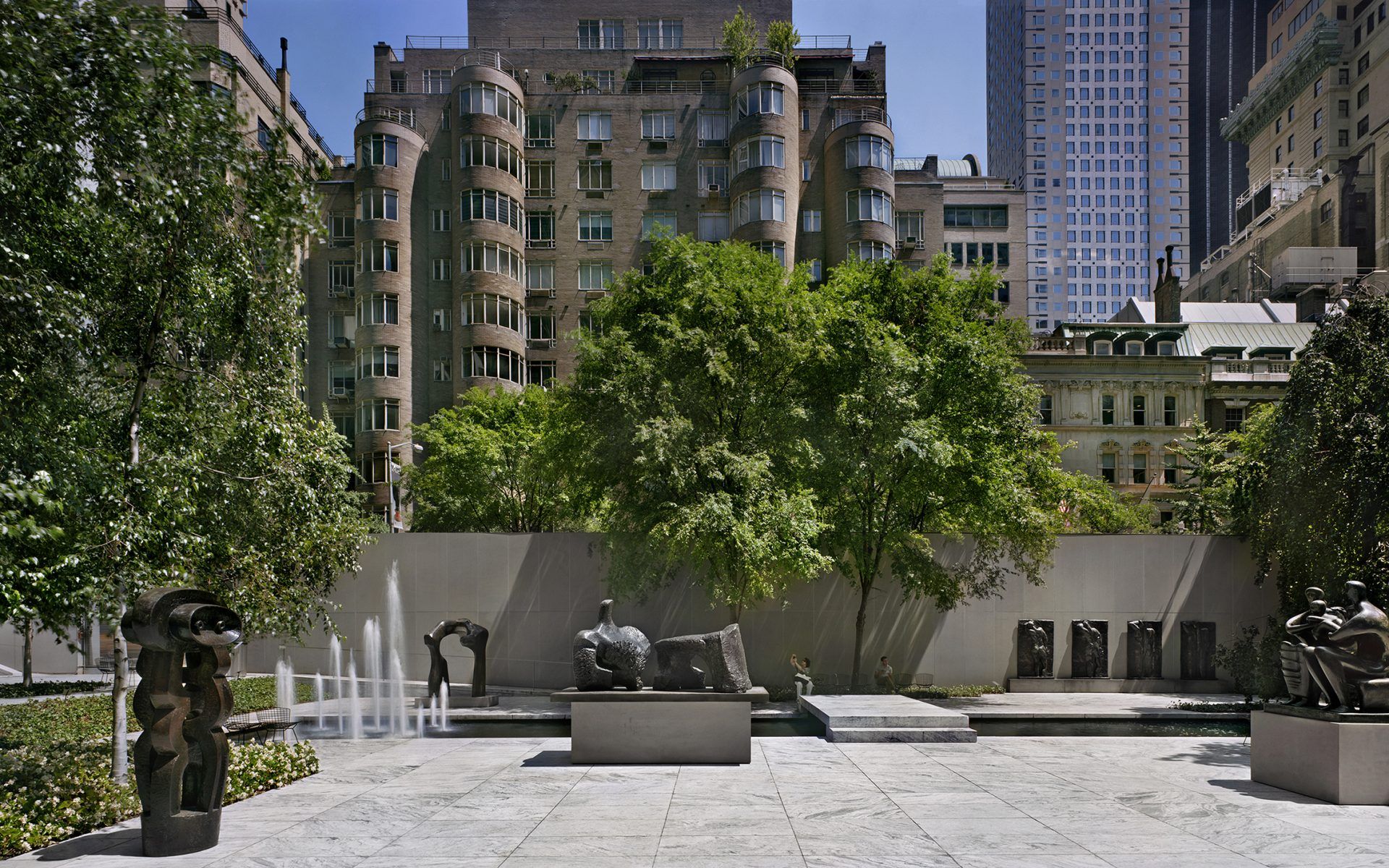 The MoMA Sculpture Garden can be viewed online as part of the museum's Virtual Views series.
Photo: Courtesy of MoMA.

A Love Letter to MoMA: Glenn Lowry and Curators Share the Works They Miss the Most

From a bedroom by Charlotte Perriand to a dreamy painting by Tarsila do Amaral, these are the artworks the museum’s custodians are reflecting on from home

It was only last fall that New York’s iconic Museum of Modern Art (MoMA) unveiled its bold new home and an inspiring vision for the future of museums. Following months of closure, a $400 million renovation by Diller Scofidio + Renfro in collaboration with Gensler not only expanded the institution by some 47,000 square feet but included a daring reconfiguration of the galleries that offered visitors a fresh reading of modern and contemporary art. It also allowed more space to welcome the approximately three million visitors a year from around the world. But another type of overhaul has taken place with the onset of COVID-19, forcing the museum’s doors to be shuttered indefinitely.

While culture as we know it has come to a standstill, MoMA has taken to increasingly inventive strategies to stay engaged with the public, including launching a Virtual Views series, hosting free online arts education courses, and even selling rare books from the archives. Still, the experience of seeing art in person at the museum cannot be replaced. As the institution’s esteemed director, Glenn D. Lowry, and the heads of departments are hunkered down at home, Galerie wanted to find out the artworks in the museums collection that they miss seeing the most. Read on to discover the insightful picks from the departments of film and painting to sculpture, and why they have made such a lasting impact.

“I normally begin my day at the Museum of Modern Art with a walk through the galleries. I now find myself doing this from home, almost every morning, with my eyes closed. And as I imagine myself in the galleries, I keep coming back to Jack Whitten’s magisterial Atopolis: For Edouard Glissant, the artist’s meditation on what it means to be part of the African diaspora, a community without a place—literally atopolis—but which has had to create its own places. The painting is a tour de force comprised of bits and pieces of dried acrylic paint that, from a distance, look like a satellite photograph of a dense urban setting. It’s easy to get lost in the topography of Atopolis’s richly textured surface, but Whitten asks us to think about more. By invoking the great Caribbean philosopher and poet Edouard Glissant, he invites us to reflect on identity and race, colonialism and the experience of the African diaspora, issues Glissant thought about at length. With its sprawling forms that reach out, then retreat from each other, then connect again, Atopolis is all about recognizing that the search for unity only comes from understanding the recourse of the past and the tensions of the future. That is why it remains lodged in my mind and will be the first work I visit when we return to the galleries.” Tarsila do Amaral, The Moon (A Lua), 1928. Photo: Courtesy the Museum of Modern Art

“I already am bracing myself for how emotionally overwhelming it will be to return to our galleries, whenever it is that we do, and reunite with artworks that we have taken for granted for so long. Where to look first? There will be countless old favorites, but I’ll discuss a new one here: Tarsila do Amaral’s The Moon (1928), which we acquired just over a year ago. Do Amaral was a Brazilian artist who spent much of the 1920s in Paris, developing a radically personal visual language. The Moon presents its subject lying on its side in an abstracted night sky. Below, a sole standing figure—or, per its green color, a plant—stands on land, alongside a blue semicircle suggesting a body of water. Although all paintings are silent, this one is very much about silence.  Silently, it raises questions as powerful as the nature of one’s place within the wholeness of the universe. Another reason I cherish this painting is that it offers proof to me that we are always learning: In terms of discovering our histories, as well as our present, our work is never done. Tarsila do Amaral is an artist most of us New Yorkers had never heard of a decade ago. Now The Moon occupies a wall near Picasso’s Three Musicians and Brancusi’s Blond Negress, among others, setting the painting right back in the avant-garde milieu in which it was created and first shown.” “In these long weeks of the lockdown very many of us have been confined to our apartments, and I have been thinking fondly of the ensembles of modernist interiors in MoMA’s collection, many of which were on view in a recent survey exhibition. One of my favorites is the study bedroom designed for Brazilian students at the Cité Universitaire in Paris by the French architect and designer Charlotte Perriand, who was honored with an extensive retrospective earlier this year. Perriand’s highly functional, modular scheme was installed in 95 rooms of the Maison du Brésil, a building designed by Brazilian architect Lúcio Costa and Perriand’s long-term collaborator Le Corbusier. Perriand combined high-tech industrial materials (such as aluminum, concrete, or Formica) with woods that were familiar to the Brazilian students. She applied color not only in the off-the-shelf plastic trays but also in an ingenious way to define separate functional zones; and her multipurpose, mobile furniture made intelligent use of the limited space available. This classic midcentury interior truly exemplifies a proposition of how we should live.” “I am longing to visit our fourth-floor collection galleries and immerse myself in Ibrahim El-Salahi’s Prison Notebook (1976). Through an extraordinary suite of delicate pen-and-ink drawings and breathtaking calligraphy, El-Salahi—a foundational figure of African and Arabic modernism—recounted his arbitrary imprisonment in a Sudanese jail. Mythological figures and visiting birds populate the sheets among depictions of prison life and various self-portraits. The artist later recalled, ‘Writing things frees you from the agony you have gone through.’ I never thought I could understand how powerless one can feel when suddenly disconnected from the world. In these last weeks, my mind has often drifted among the pages of the Prison Notebook. Alone and in the face of terrifying adversity, El-Salahi trusted his creative powers ‘to make sense of why things unexpectedly happen to us, and bring some order back.’ May we follow his lead.”

Recommended: A Love Letter to The Met: Curators Share the Works They Miss the Most “Within MoMA’s impressive collection of photographs, I am particularly drawn to Gillian Wearing’s Self-Portrait at 17 Years Old (2003). Born in Birmingham, U.K., in 1963, Wearing received the Turner Prize in 1997. In 2003, then 40 years old, Wearing was inspired by a portrait she made of herself in a photo booth at age 17, and she re-created that photograph using a silicone mask. Wearing continues the reflection of artists who have been using photo booths as a creative tool from the Surrealists to Andy Warhol, and more recently Lorna Simpson, David Wojnarowicz, Susan Hiller, Thomas Ruff, and Cindy Sherman, to only name a few. Adhering to the characteristics of the photo booth, Wearing’s self-portrait is frontal; the artist is staring at us forcefully. But when we too begin to scrutinize her gaze, we understand that the image has been reconstructed as the edges of the mask are still visible around her eyes. The self-portrait reminds us that we are all made up of multiple layers that are consonant with the different ages of our lives. It also responds to the famous injunction ‘Know yourself.’ I am looking forward to joining MoMA and to seeing this masterpiece again soon.” Wu Tsang, We Hold Where Study, 2017. Photo: Courtesy the Museum of Modern Art

“With our bodies confined or on the line, unable to gather collectively, my thoughts have returned frequently to We Hold Where Study, a video installation by Wu Tsang conceived in collaboration with the poet and scholar Fred Moten. The work is currently installed on MoMA’s second floor. It begins in darkness, filling the gallery with Moten’s sonorous voice detailing ‘the hazards of moving, of movement and of being moved, of knowing that we are affected, that we are affective.’ Moten’s voice-over is interrupted by a saxophone solo by Bendik Giske and a burst of sunlight illuminating a lush green landscape into which Moten’s sons, Julian and Lorenzo, venture joyfully. The screen splits into two overlapping projections featuring a pair of duets that work through gestures of intimacy and violence: on the left, boychild and Josh Johnson in an abandoned field; on the right, Ligia Lewis and Jonathan González in a dance studio. The video unfolds in chapters synced to Moten and Stefano Harney’s essay ‘Leave Our Mikes Alone,’ a text prompted by the early death of Jamaican dub poet Mikey Smith. The video’s entangled forms choreograph a lexicon of racial violence and forms of community that can resist it, resonating with Moten’s phrase ‘Contact improvisation is how we survive genocide.’ Tsang’s work convenes a powerful space for assembly, one in which I look forward to gathering together again, affected, affective, and alert.”

Recommended: 13 Artworks That Reflect This Time, According to Art World Luminaries “When unassembled footage of what would have been the first feature film with an all-African-American cast was discovered in MoMA’s archives in 2014, the joy was effusive. A middle-class comedy, Lime Kiln Club Field Day (1914) is built around legendary performer Bert Williams (a black star who was obliged to perform in blackface in an accommodation to white audiences) as a pre-Chaplinesque comedic suitor to the local beauty (Odessa Warren Gray). In a three-minute sequence, currently installed in gallery 502, Williams and the ensemble cast (all of whom appear without racist makeup) perform an exuberant rendition of the traditional ‘Cakewalk’ line dance. Oh, how I miss seeing visitors marvel at this long-lost treasure, often recognizing themselves in it (as anyone who danced along to Soul Train on TV would . . . ). I can’t wait to dance with Bert, Odessa, and the Lime Kiln Club again soon!”

Cover: The MoMA Sculpture Garden can be viewed online as part of the museum's Virtual Views series.
Photo: Courtesy of MoMA.
Next Post