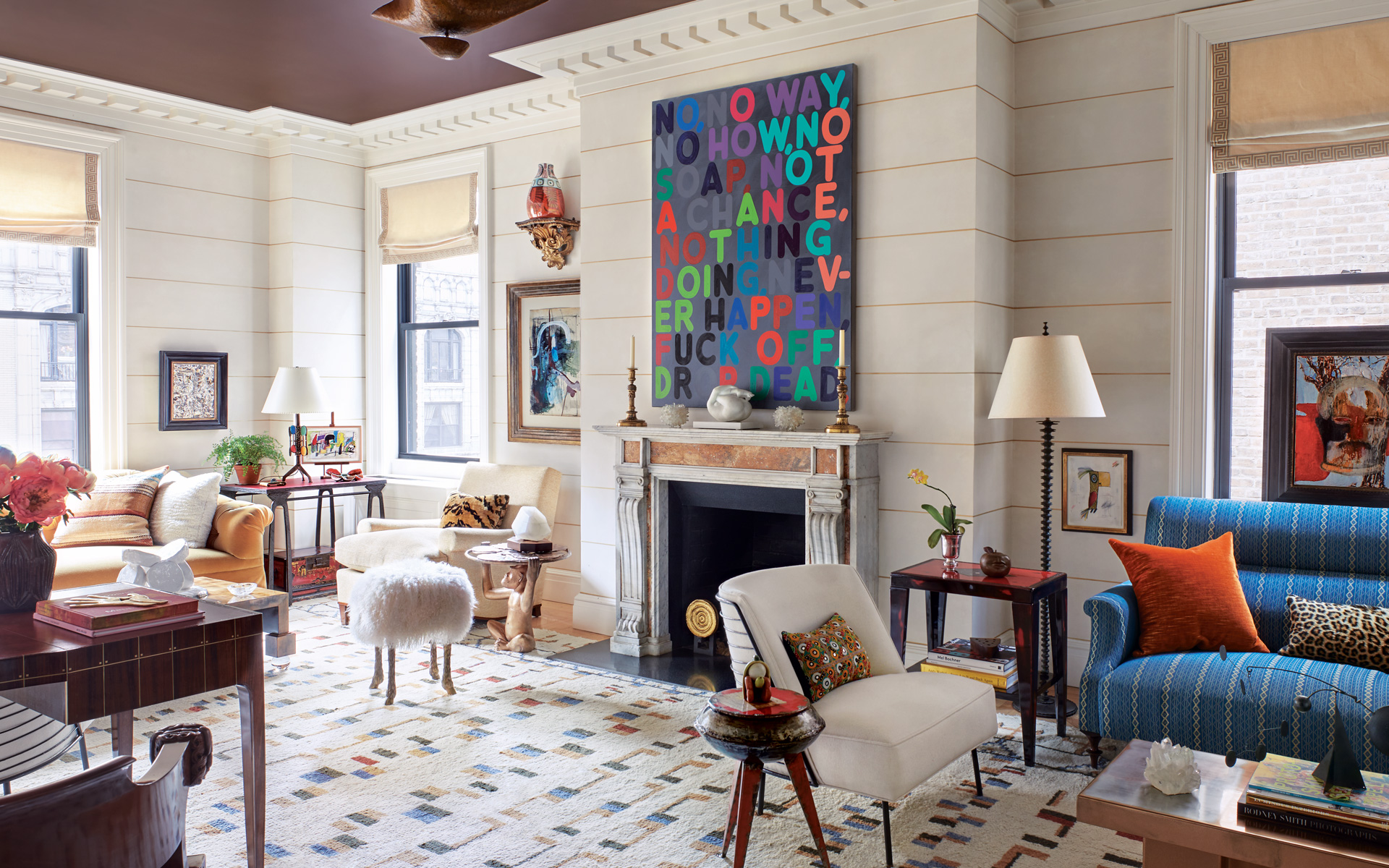 Glamorous gets gutsy in the designer’s New York City apartment, thanks to an ever-evolving mix of sophisticated furnishings and arresting art 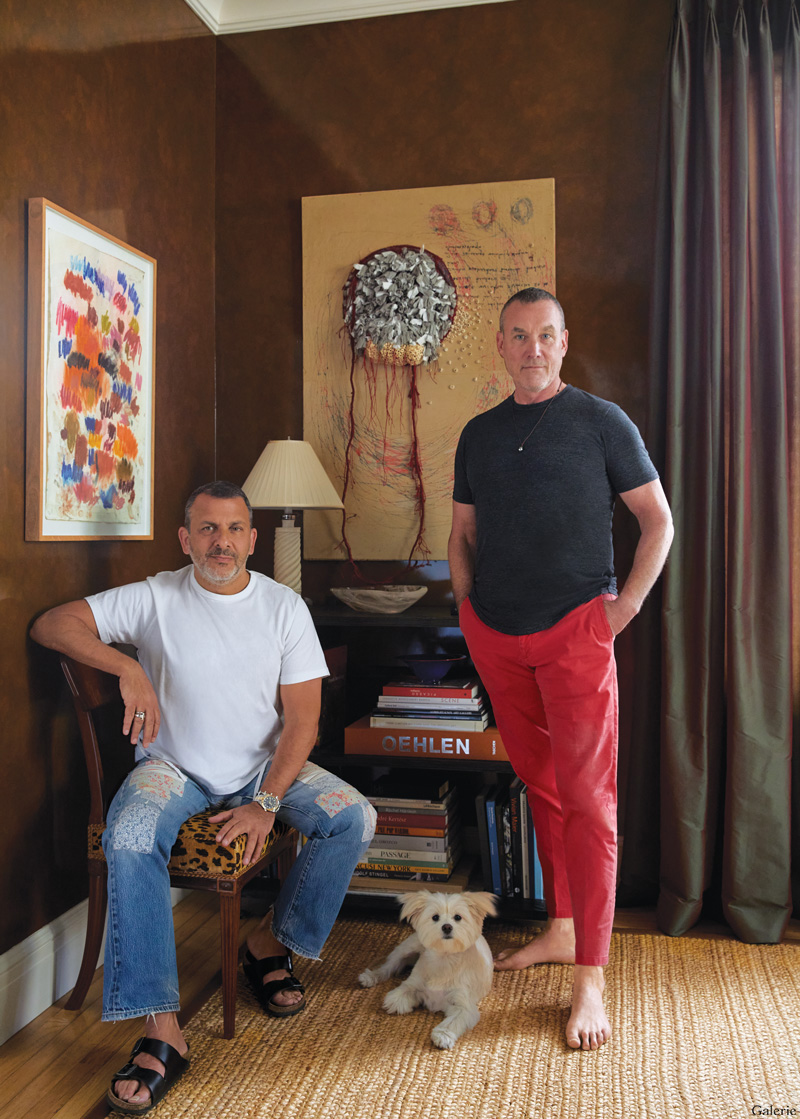 Daniel Sager is seated beneath a Günther Förg work, while Brian McCarthy stands in front of a piece by Wallen Mapondera, and their dog, Vita, relaxes on the dining room’s Beauvais Carpets rug. Photo: Francesco Lagnese. Styled by Carolyn Englefield

New York City interior designer Brian McCarthy was driving with Daniel Sager, his partner in business and in life, down to Maryland to visit family this summer when he came clean. The New York Times had just run a stellar review of multimedia artist Tiona Nekkia McClodden’s buzzy exhibition at the gallery 52 Walker, a show McCarthy says “absolutely blew my mind.” Sager, figuring McClodden’s work would now be even more in demand, teased, “Well, I guess you missed that boat!” Actually, he hadn’t.

McCarthy fessed up to acquiring not one but two pieces. And not for the first time. On more than a few occasions the designer, a self-described “drug addict when it comes to art,” has had to explain an unexpected call or invoice from a gallery to Sager. “Danny’s a great sport about it, but he’ll always ask, ‘Why can’t we just go to a museum and look at something that’s not for sale?’ ” McCarthy says. 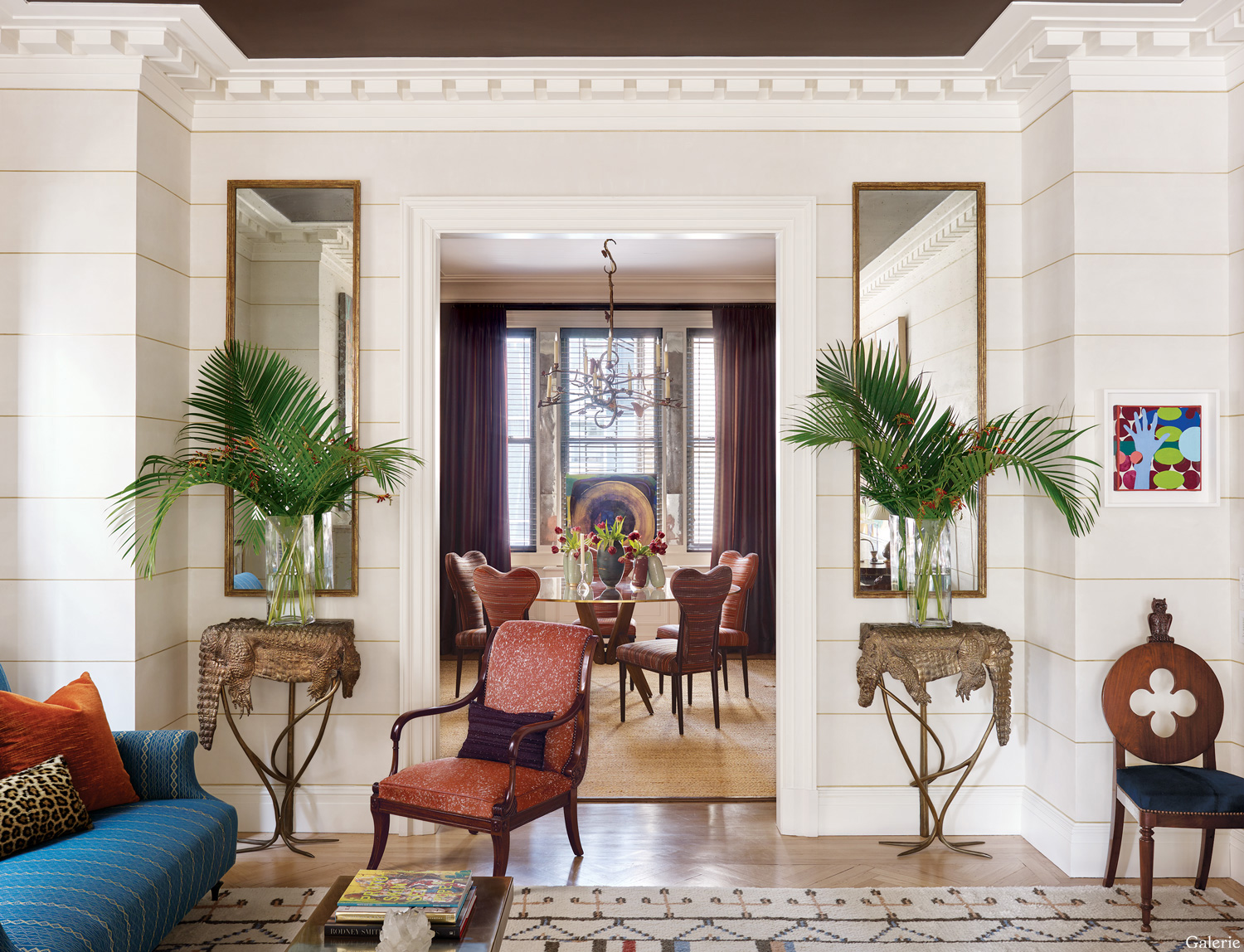 A quick scan of the couple’s midtown Manhattan home would suggest that McCarthy’s acquisitiveness has prevailed. Located on 57th Street, in a 1922 building across from Carnegie Hall, the two-bedroom apartment has gone through three significant renovations since McCarthy moved in 23 years ago. That’s not counting the constant art and furnishings updates, or “evolutions,” as the designer likes to describe them. “It’s fun because I’m constantly collecting, and so there’s always something coming and going.” 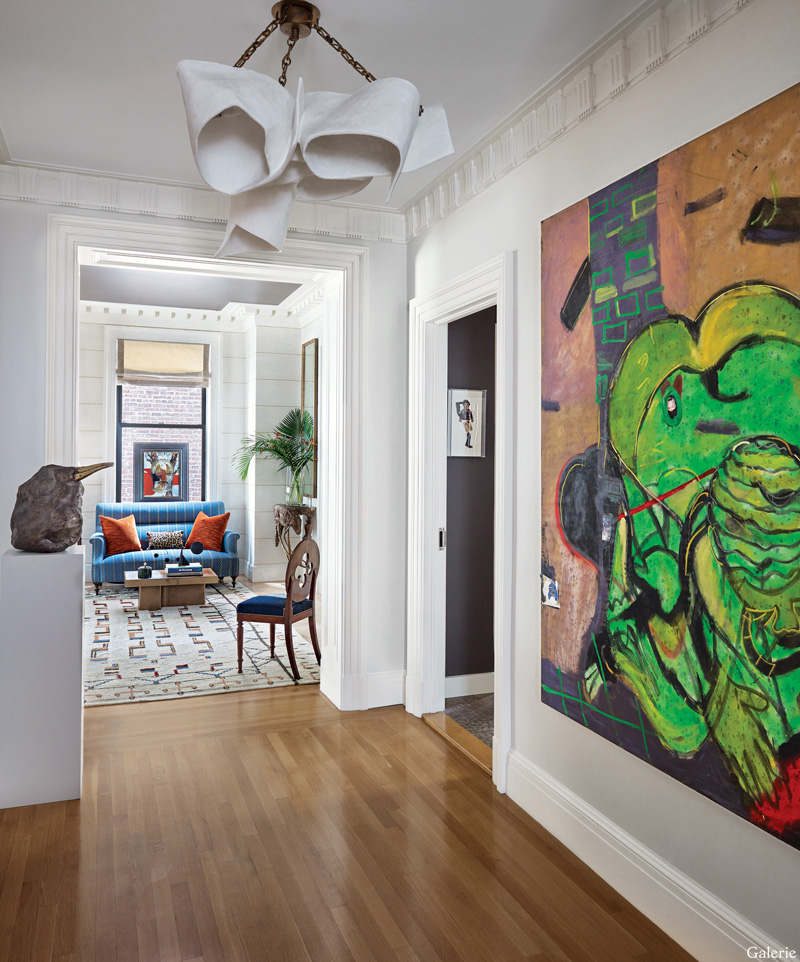 Having started his career in the 1980s at Parish-Hadley, a firm synonymous with elegant American decorating, McCarthy is well known for interiors infused with undeniable glamour and aesthetic savoir faire. While impeccably tailored, his rooms never feel conventional, thanks to sparks of uncommon color, creative decorative details, and memorable combinations of exceptional furnishings and art.

Still, when Sager came into McCarthy’s life two decades ago, he admits he was a little unsure about some design choices in the apartment, which at that time featured lots of neoclassical furniture. “Brian had this 18th-century four-poster Italian bed,” recounts Sager. “Let’s just say it was beautiful, but it wasn’t sexy.” 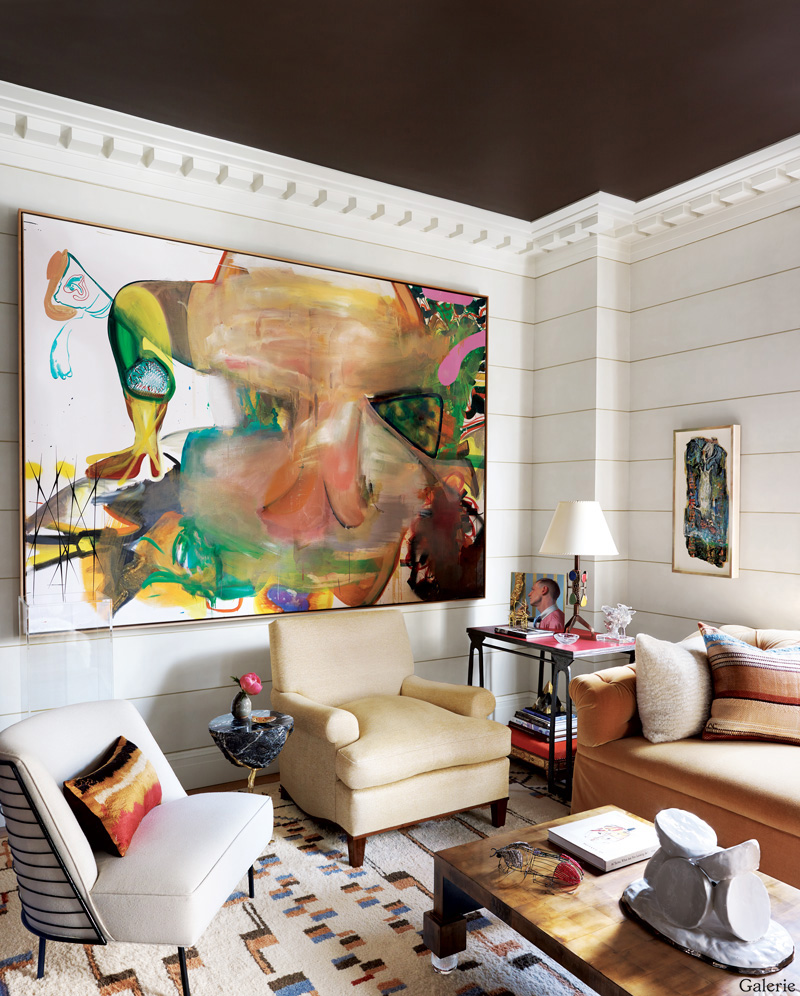 In designer Brian McCarthy and Daniel Sager’s New York apartment, the living room features an evocative work by influential German artist Albert Oehlen, whose collage-esque paintings meld abstract and figurative forms with frenetic energy. “We both had an immediate, heart-stopping reaction when we saw this piece,” says McCarthy. The ceiling, meanwhile, is painted in Benjamin Moore’s Mississippi Mud. “I wanted the ceiling to go with the shadow in the canvas,” he adds. Photo: Francesco Lagnese. Styled by Carolyn Englefield

Though the refinement remains, many of the 18th-century pieces are gone, replaced by a diverse mix of furnishings that skew more modern and contemporary. An important part of that are commissions specially made by some of McCarthy’s favorite artisans, not least the late Claude Lalanne, who created the dining room’s exquisite bronze chandelier. It was the last piece she produced for McCarthy. “Thank God I did it when I did,” says the designer, who also owns a prized pair of her crocodile consoles, which he insists he’ll “never let leave here.”

“It’s fun because I’m constantly collecting, and so there’s always something coming and going” 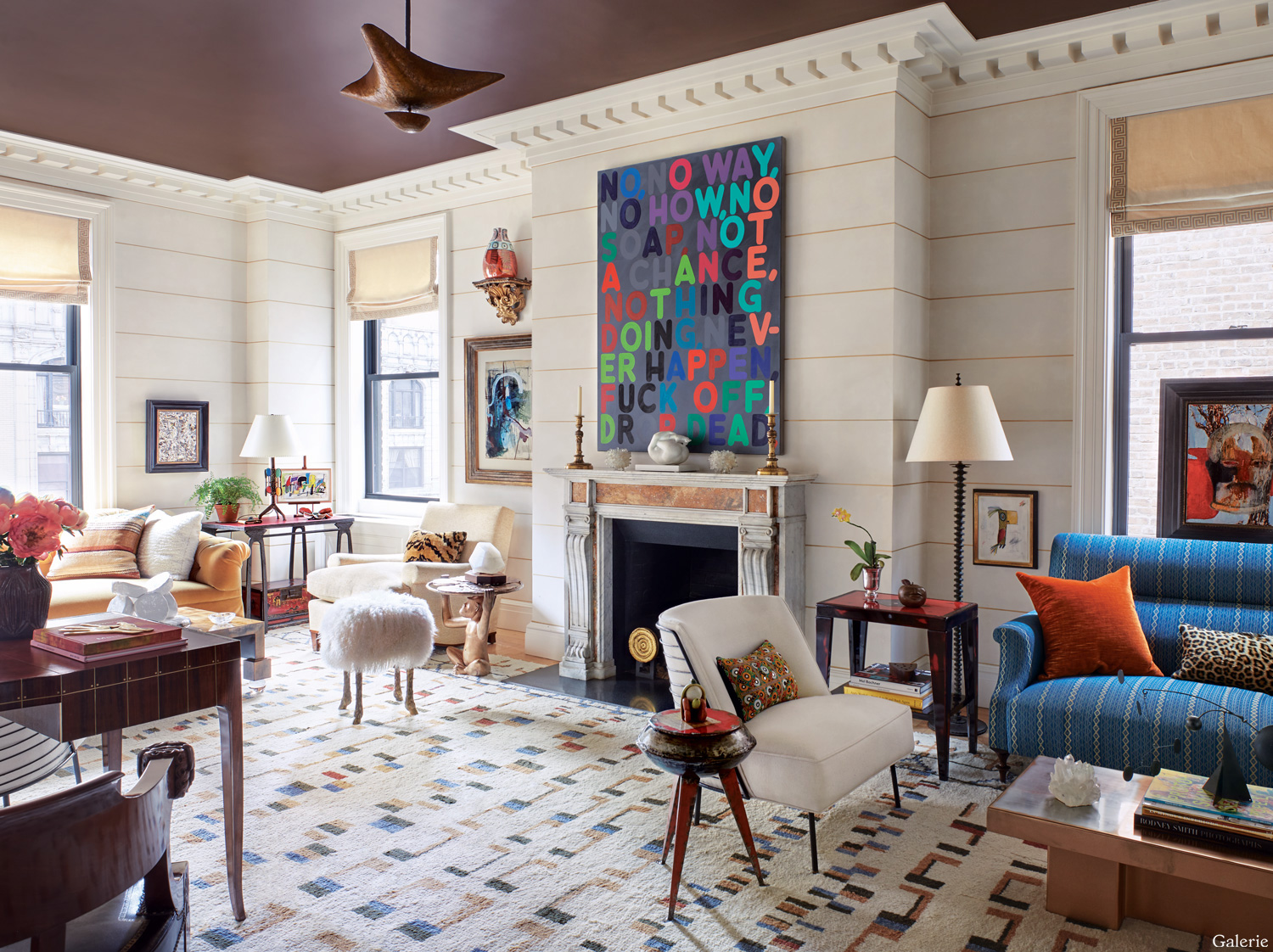 An irreverent Mel Bochner text painting strikes a playful note over an 18th-century mantelpiece in the Manhattan apartment designer Brian McCarthy shares with his partner, Daniel Sager. To the left of the fireplace, a Marc Bankowsky lambswool-clad stool and a monkey table by Claude and François-Xavier Lalanne join a Jonas armchair beneath an Albert Oehlen artwork. On the right, a small Pino Pascali painting hangs next to a W. P. Sullivan lamp, a 1930s French lacquer side table, and a Joaquim Tenreiro lounge chair. Photo: Francesco Lagnese. Styled by Carolyn Englefield

There are classical elements, such as the robust dentil cornice moldings McCarthy added in the living room “to make it gutsier” when he redid the entertaining spaces with architect Robert W. Anthony several years ago. He kept the 18th-century mantelpiece installed in an earlier renovation, taking its formality down a notch by mounting a salty Mel Bochner text painting above it. And he finished the walls in an oyster-hue Venetian plaster embellished with rhythmic horizontal gilded bands. It’s a great background, the designer says, for artworks such as the monumental abstract Albert Oehlen canvas that presides over one end of the room, which is crowned by a ceiling painted a shade by Benjamin Moore called Mississippi Mud. 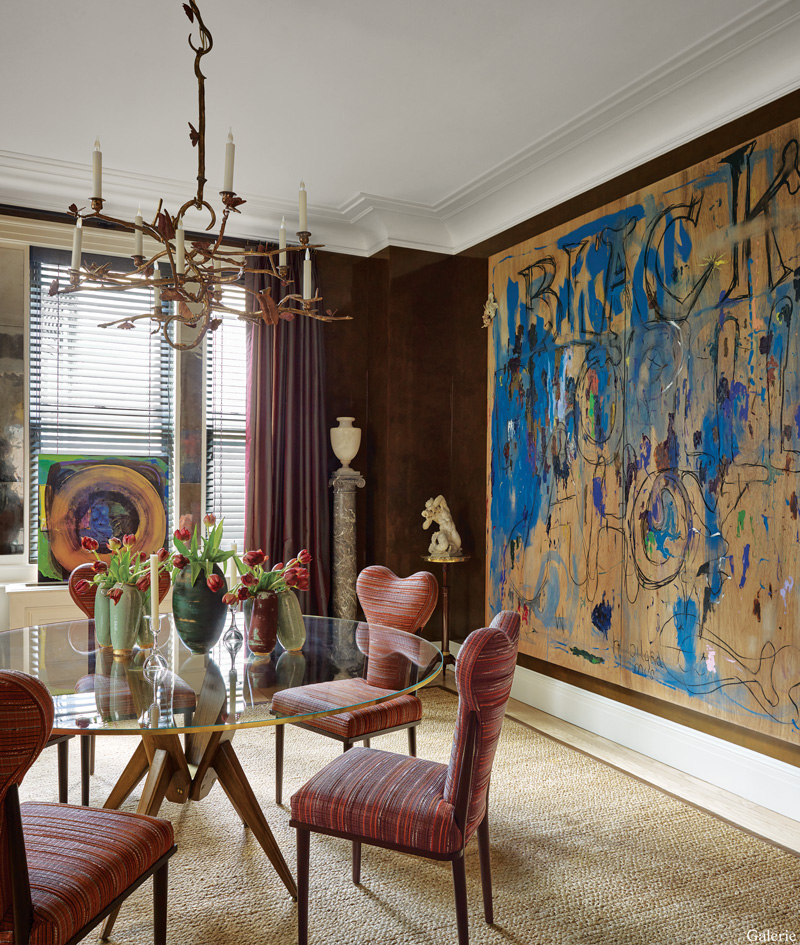 A monumental artwork by William Pope.L presides over the dining room, where McCarthy installed a Claude Lalanne chandelier above a glass-top table with a Gio Ponti base and Jean Royère–inspired chairs with Toyine Sellers upholstery. The painting in the window is by Walter Price. Photo: Francesco Lagnese. Styled by Carolyn Englefield

The palette is essentially flipped in the dining room, where the couple regularly hosts intimate dinners at the glass-top table with a striking Gio Ponti wood base. “I wanted this rich, dark background that kind of throws its arms around everybody when you’re in here,” McCarthy says of the walls plastered in a deep mocha. It’s a shade that, he says, also works well as a backdrop for the room’s art, highlighted by the largest of the couple’s multiple paintings by William Pope.L, whose provocative oeuvre deals with issues around race and class. 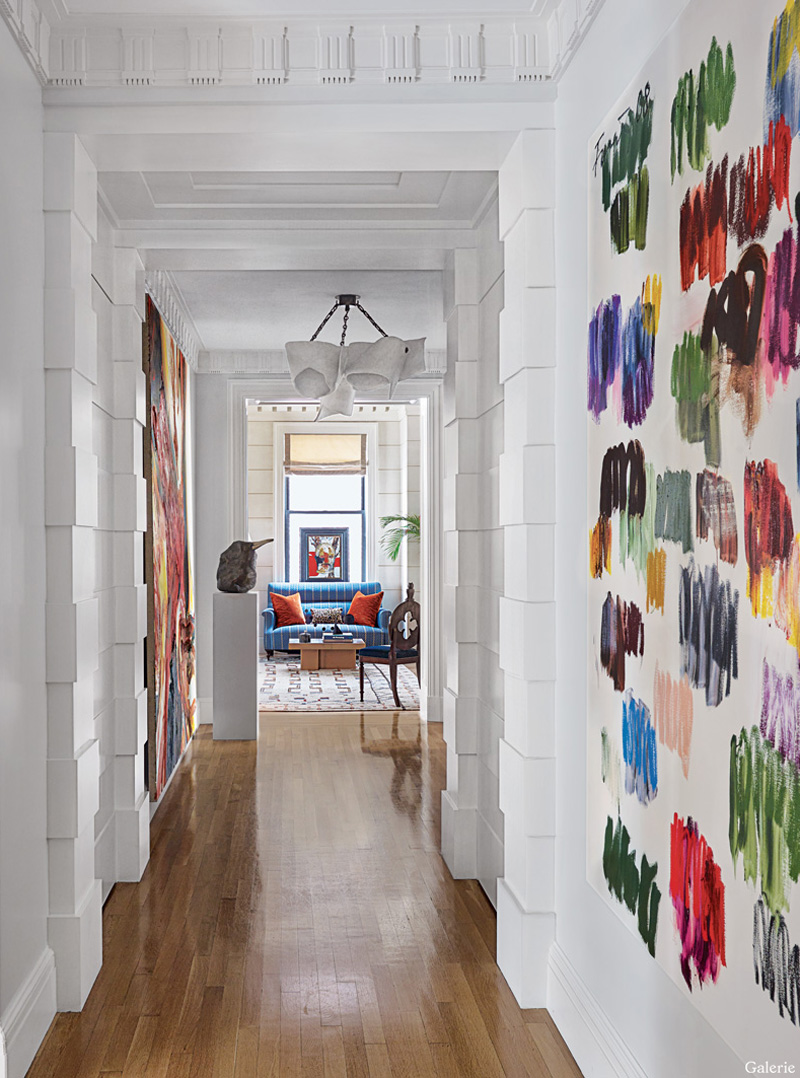 In the entry hall of the New York apartment of Brian McCarthy and Daniel Sager, a colorful Günther Förg painting (right) is joined by a Patrice Dangel plaster-and-bronze chandelier, a canvas by Doron Langberg, and a sculpture by Alma Allen. Photo: Francesco Lagnese. Styled by Carolyn Englefield

McCarthy notes that lately he and Sager have acquired more figurative works, often by artists of color and queer artists addressing identity issues. He points to an eye-catching painting by Jonathan Lyndon Chase—whom he likens to a “gay Matisse,” owing to the artist’s Fauve-like use of expressionistic hues—that hangs in the central hallway gallery beneath a sculptural Patrice Dangel plaster and bronze light fixture, another custom commission.

The couple’s bedroom also has a new bespoke chandelier, a graceful tangle of metal strands by Hervé Van der Straeten patinated in a color that complements the room’s blushy ocher and copper tones. Its swirling form plays off the undulations of the room’s Caleb Woodard cabinet and the Stephen Antonson plaster bedside lamps encrusted with whimsical disks. 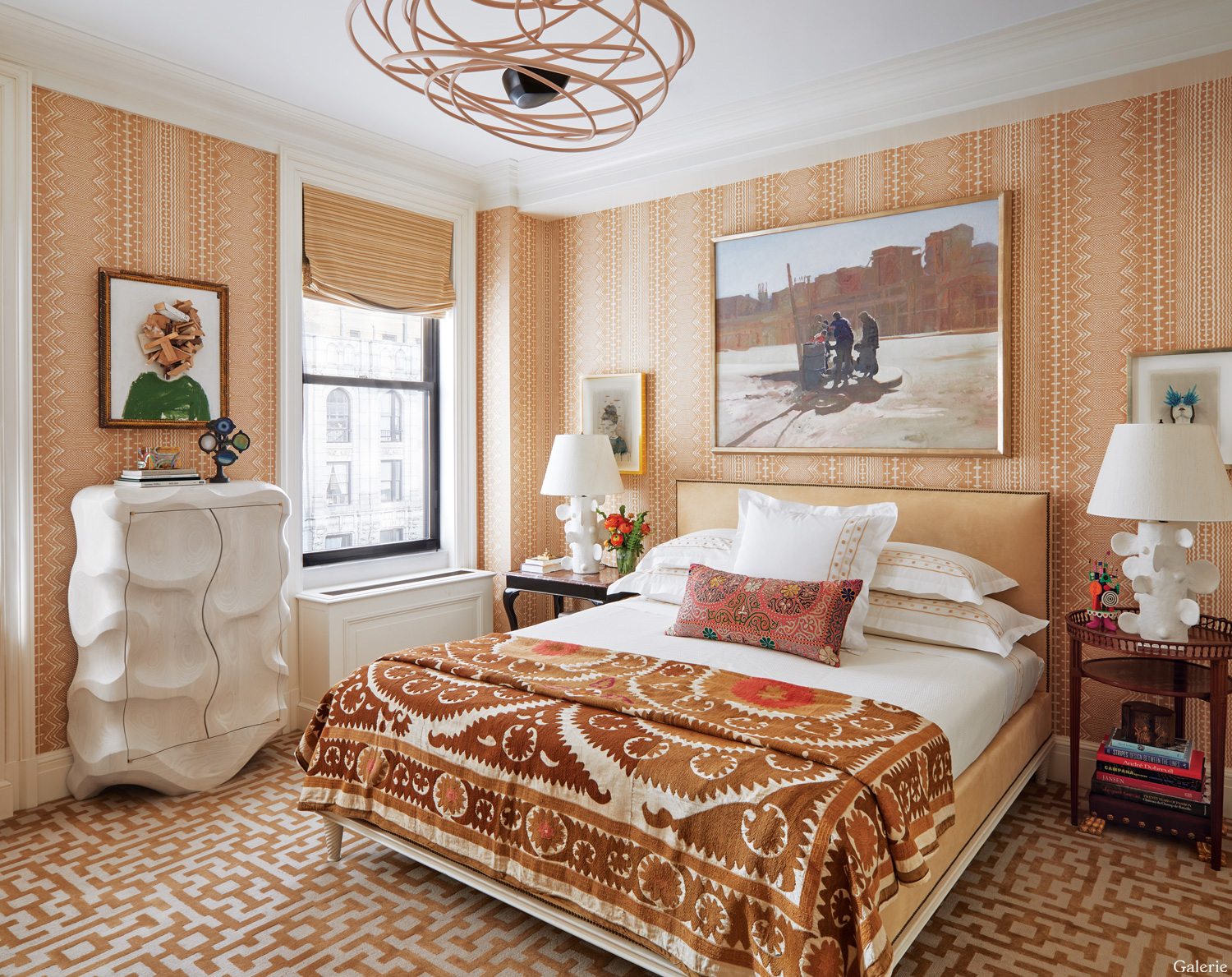 A dynamic Hervé Van der Straeten light fixture crowns the bedroom, where McCarthy amped up the pattern with a John Rosselli & Associates wall covering and carpeting from Beauvais Carpets. A painting by Edi Hila is centered over the Jonas bed, which is dressed in Julia B. linens, while Stephen Antonson lamps top antique French tables on either side, and a work by Greg Haberny surmounts a Caleb Woodard cabinet. Photo: Francesco Lagnese. Styled by Carolyn Englefield 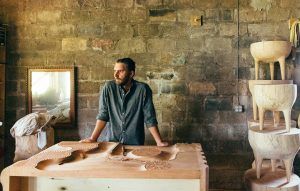 Sager and McCarthy now have separate baths, each with its own distinctive marble and fixtures, following their last big update, completed with architect Alexandre Gamelas, of AGCS Arquitectos, just before the pandemic. And McCarthy is already eyeing his next renovation project: the kitchen. He knows exactly how he would redesign it. The main thing holding him back is the thought of cutting into his art acquisition budget. “The question is,” he says, “how much do I really want it?”

A version of this article first appeared in print in our 2022 Winter Issue under the headline “High Style, High Voltage.” Subscribe to the magazine.