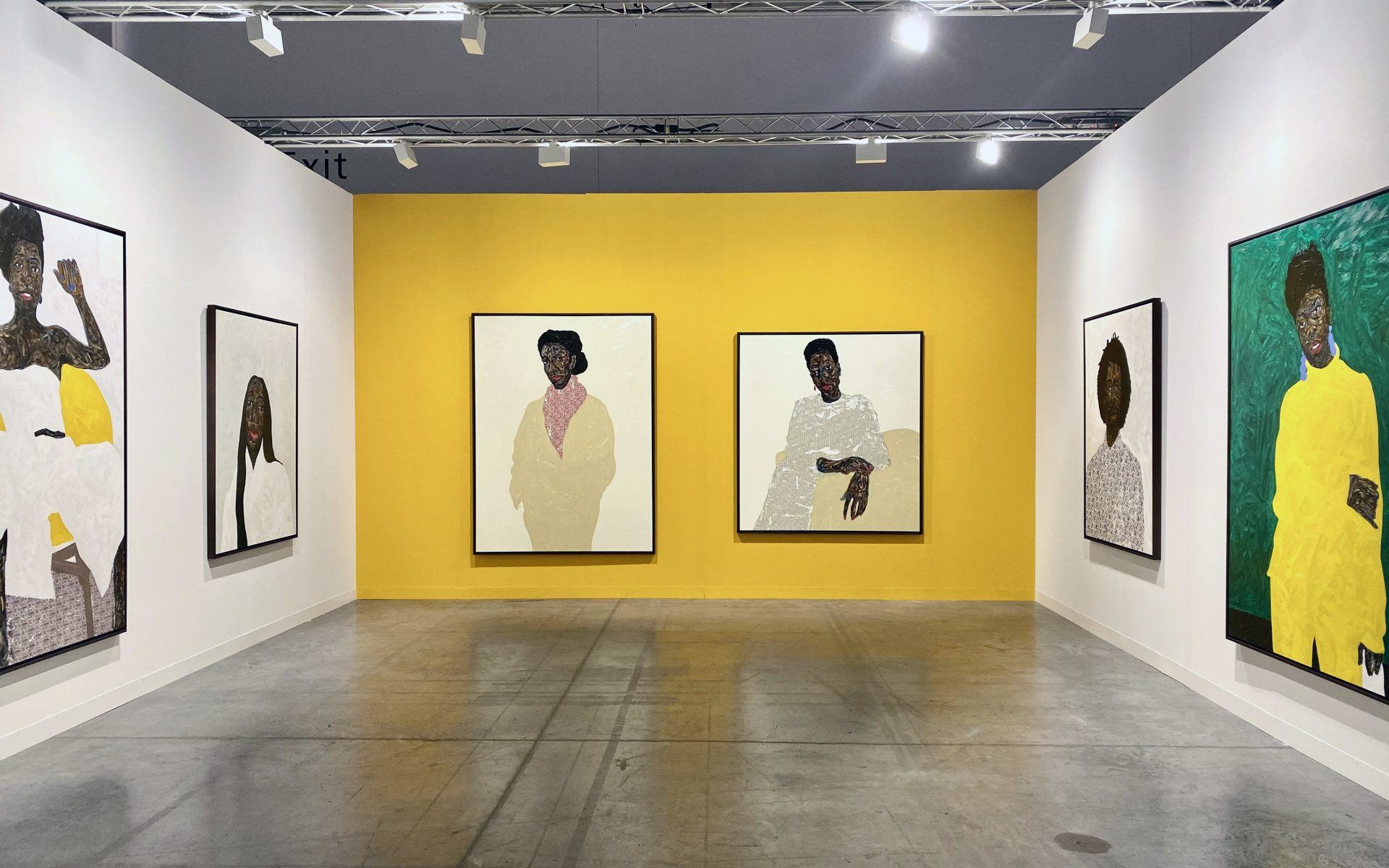 7 Standout Talents to Watch at Art Basel in Miami Beach

Out of all the fairs taking place in Miami this week, Art Basel in Miami Beach is the premier arena for blue-chip artworks by the world’s most established artists. With some 267 exhibitors from across the globe, the flagship fair also offers an opportunity to discover fresh new talent. We scoured the Miami Beach Convention Center to present a list of artists who are already generating considerable buzz. Find it below. For her Art Basel in Miami Beach debut, the Chicago gallerist Mariane Ibrahim presents a series of six striking paintings by buzzworthy artist Amoako Boafo. Using his fingers, the Accra, Ghana–born talent applies diluted oil paint to create swirling masses of color, portraying both friends and imagined characters and often isolating the figure against a dramatic backdrop. The works explore masculinity, the diaspora, and, according to Boafo, “new ways to approach and document blackness.” The booth sold out before the fair opened. “It’s been an incredible experience,” Ibrahim tells Galerie. Boafo seems to be everywhere in Miami this week. He is an artist in residence at the recently opened Rubell Museum, and some ten new paintings of his transform a room in the Annabelle Sellfdorf–designed space. Canvases were also spotted at the Roberts Projects booth nearby. New York artist Kathleen Ryan has transformed a rotting pile of fruit into something of sumptuous beauty. At Josh Lilley’s booth in the Nova section, a monumental wagon contains a pile of carved lemons, oranges, peaches, grapes, and cherries in the midst of decay. Each fruit is bedazzled with hundreds of glittering semiprecious stones that have been intricately placed to create beautiful gradients of color. The work plays with opposing elements such as value and worthlessness, as something one would normally throw away is highly embellished and transformed into something precious. After a slew of exciting shows in New York this year, she is participating next in the Liverpool Biennial, which takes place in June 2020. An instant hit at Stevenson’s booth is the work of 29-year-old Los Angeles artist Simphiwe Ndzube, who creates surreal depictions of everyday African life. The scenes are inspired by the African working-class men’s tradition of “swenking,” informal competitions that are part fashion show, part dance-off. Pieced together with painted fabric, found materials, and appliqué, they often feature grotesque figures parading around magical dreamscapes. The worlds the artist creates comment on the black experience in post-apartheid South Africa, offering a new way to experience that harsh reality. Ndzube has recently exhibited at the prestigious 15th Lyon Biennale and Jeffrey Deitch gallery, and his work is in the Rubell collection.

Recommended: An Exclusive First Look at the Rubell Museum Going from strength to strength these past few years, the L.A. artist explores the nuanced dynamics of power and sexuality by taking the fundamentals of photography and subverting them. His subjects are often a group of queer men, including himself, who pose in various positions surrounded by tripods, stools, velvet cloth, and other photo-studio staples. He utilizes techniques of fragmentation, layering, and mirror imagery to break down the physical setup of a photograph and to challenge the social dynamics at play. The intricate compositions draw the viewer in as they are left to question what is real and what is staged. Sepuya’s work is found in the permanent collections of the Museum of Modern Art, the Whitney Museum of American Art, the Guggenheim Museum, and the Studio Museum in Harlem. It’s hard not to marvel at the exuberant, beaded works of Mexico-born, New York–based artist Raúl de Nieves, who broke onto the scene in a big way at the 2017 Whitney Biennial. At Company Gallery’s weird and wonderful booth, shared with the young Swedish artist Cajsa von Zeipel, de Nieves has crafted two pairs of bead-encrusted boots mounted on stained-glass-like light boxes alongside his signature costumed creatures. Woody De Othello has been causing a stir for his oversize, intentionally wonky ceramic sculptures of household items. At Merdians, the installation recalls the memory of a hot summer day growing up in South Florida, where the artist was raised by Haitian parents. In the center of the booth, a vibrant yellow fan cast in bronze seems to slowly melt from the heat, while a group of ceramic stools adds to the domestic scene. A recent art school graduate, De Othello has already participated in the Front International: Cleveland Triennial for Contemporary Art; the 33rd Ljubljana Biennial of Graphic Arts in Slovenia; and the Bay Area Now 8 show at San Francisco’s Yerba Buena Center for the Arts. His bronze sculptures of stretched body parts and melting clocks can also be found at the San Francisco International Airport. The young Brooklyn artist first made a splash with his dazzling paintings constructed from paper and wood panels at the Whitney Biennial in 2017. Since then, his practice has spread to include installation and sculpture, and his career has taken off. At Art Basel in Miami Beach, Thornton presents a monumental, 12-foot-long installation in the Meridians section with Los Angeles gallery Morán Morán, with perhaps the longest work title in the fair: How Literal You Want Me? Dirt’s Foundational and Socially Homogeneous Overlap, Which Mirrors All Skins, Sampled, Which Also Appear as Topographical Tea Perspectives, with Twister as a Social Teacher and Presenter of Various Discomforts Depending Your Space)(eg: My One Hyper Key as Appetizer) (2019). Don’t miss his next presentation at Independent New York in the spring of 2020.

Art Basel in Miami Beach is on view through Sunday, December 8.