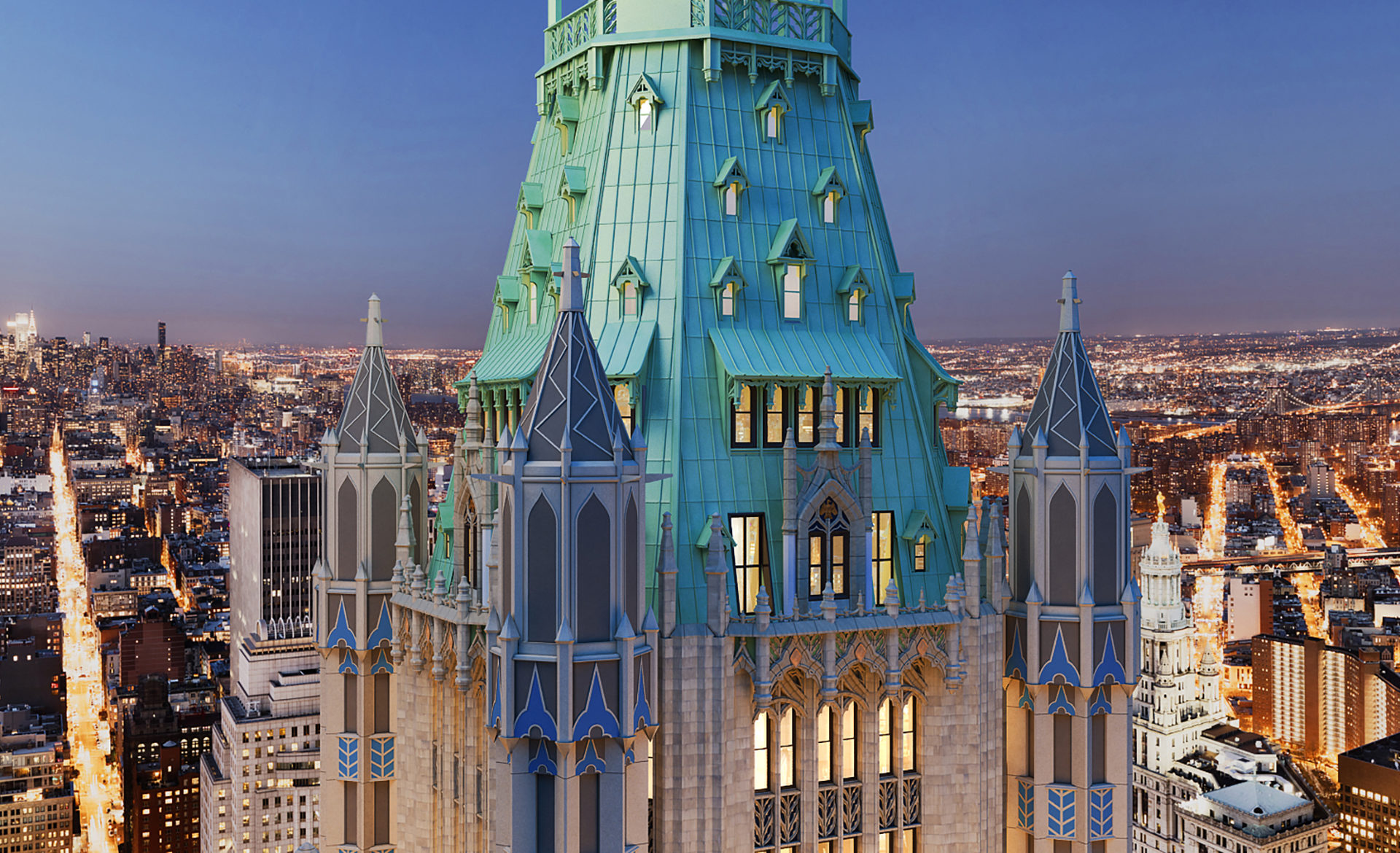 Designed by Cass Gilbert, the Pinnacle would set a downtown record if it fetches anywhere near its asking price A postcard sold by the Woolworth Building’s erstwhile observation deck was retrieved by a historian working on the conversion. Photo: Sotheby's

Among New York’s most iconic skyscrapers, the 58-story Woolworth Building stands out for its romantic interpretation of Gothic ideals, with terra-cotta gargoyles, flying buttresses, and, of course, an elegant verdigris crown. Spread across nine floors, the entire pyramidal cap hit the market in 2017 with a staggering $110 million price tag. (It was the city’s most expensive unit at the time.) Now the palatial pad has dropped its asking price to $79 million, which would still set a downtown record if it fetches anywhere near that amount.

Completed in 1913 by leading architect Cass Gilbert, the 792-foot-tall “Cathedral of Commerce” was named after Frank W. Woolworth, a dime-store tycoon with ambitions to build the city’s premier office space. Between the tower’s inauguration—when it was the tallest structure in the world—through the ’40s, after it had been eclipsed by the Empire State Building, sightseers were gobsmacked by an observation deck on the top floor. In the ensuing decades, it mostly sat vacant (save for mechanical equipment) and closed to the public, a victim of stymied redevelopment proposals. That all changed in 2012, after Alchemy Properties purchased the top 30 floors of the building and announced the crown would be included in the residential conversion. Alchemy Properties commissioned architect David Hotson to create these renderings to showcase the space’s potential. This is a possible configuration of the library. Photo: Williams New York

“It’s a globally recognized piece of art,” notes Stan Ponte, the Sotheby’s broker coleading sales along with Joshua Judge. Dubbed the Pinnacle, the 9,700-square-foot aerie is being marketed as a raw space or, as Ponte puts it, “designer-ready,” since “each of the billionaires who are interested have had their own vision for what owning the top of the tower looks like.”

A proposed floor plan that surfaced three years ago in The Real Deal showcased the unit’s enormous potential, including a 500-square-foot terrace with 360-degree views. “Any architect in the world would do anything to get this commission,” adds Ponte, who also says there have been more than a hundred inquiries from interested buyers since the sky-high spread was listed in 2017. While the penthouse’s interior design is currently a blank slate, the 104-year-old tower’s facade is in the final stage of a meticulous refresh, which saw 125 windows either added or expanded and 3,500 pieces of terra-cotta recast. Much of the restoration work was handled by Boston Valley Terra Cotta, a sister company to the one employed by Gilbert. Because the Woolworth is a protected landmark, Alchemy needed to get all exterior work approved by the city’s Landmarks Preservation Commission. Another postcard from former observation deck shows the tower peeking above the clouds. Photo: Sotheby's

To convert those former office floors for residential use, Alchemy recruited French architect Thierry Despont, whose Tribeca studio is located several blocks north of the edifice. The scope of his work included not only the 33 lower-level residences but also a private space on the 29th floor dubbed the Gilbert Lounge, a fitness center on the 30th floor, a residential entrance on Park Place, and a wine cellar. In addition, Despont is reimagining the building’s fabled basement-level pool and Turkish spa—initially an incentive for office tenants—which will be lined in Bisazza Mosaico tiles. For their part, Ponte and the team are busy tapping into Sotheby’s global network of deep-pocketed buyers, which includes 80 offices in 40 countries. “We’re making sure that everyone at this level is aware of this spectacular building and its history,” he says. woolworthtower.com