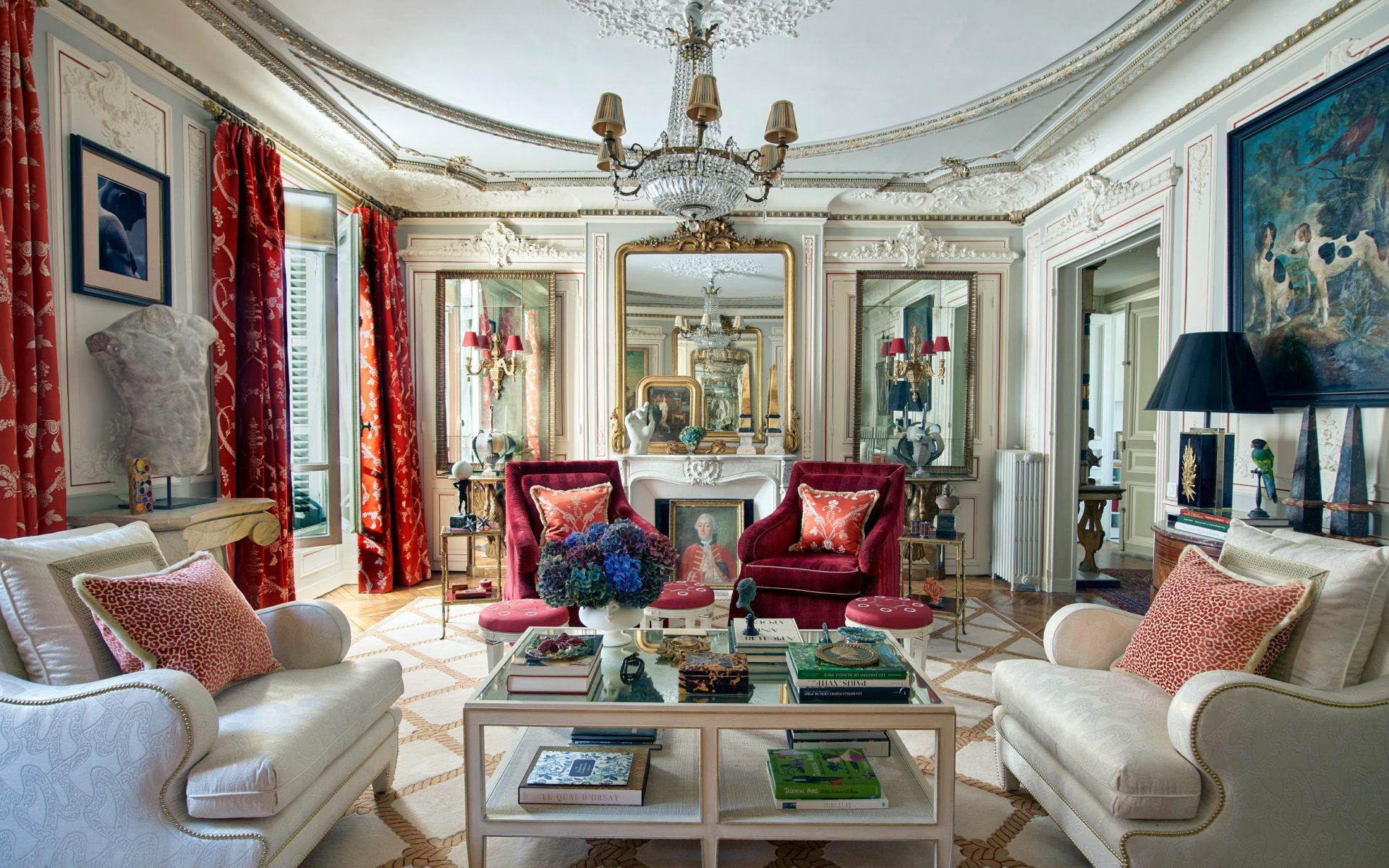 A room in Timothy Corrigan's new book by Rizzoli features a play of reflections with multiple mirrors. The seating and cocktail tables are from Corrigan’s furniture collection for Schumacher, and the rug is one he designed for Patterson Flynn Martin.
Photo: Richard Powers Is there anything designer Timothy Corrigan can’t do? In his first book, An Invitation to Chateau du Grand-Lucé, the Los Angeles–based talent chronicled the arduous but rewarding task of overhauling a timeworn (to put it mildly) 45,000-square-foot landmark nestled in the idyllic French countryside.

Now, Corrigan is releasing the highly anticipated follow-up, The New Elegance: Stylish, Comfortable Rooms for Today (Rizzoli), which features a diverse array of projects including a prominent philanthropist’s 36th-floor apartment in Chicago, a Doha palace presided over by the Qatari royal family, and even the designer’s own sumptuous Paris pied-à-terre.

Corrigan’s masterful ability to create spaces that appear effortlessly chic is on full display throughout. “I wanted to illustrate the concept that elegant can be comfortable,” he tells Galerie. “Just because a room is beautiful doesn’t mean it can’t also be livable and practical.”

Organized by project, the tome features 11 chapters each punctuated by approachable explanations of Corrigan’s core design principles, which he says can be adapted to suit anyone’s style. “The goal was to make it accessible for the reader, so that they could go through a chapter and then learn about the central elements they may not have noticed.”

Among the interludes are pages dedicated to symmetry, layering, color, architectural details, and—crucially—art. “I’m very conscious when designing for an important art collection,” he says. “I want the art to be the star, but I don’t want it to feel like a gallery; it needs to be integrated in the home in a natural way so that it’s just part of the DNA.”

Although Corrigan says it’s hard to pick a favorite, the cover project is clearly dear to him. Crafted for a major collector, the residence incorporates works by Picasso, Frank Stella, Jasper Johns, Roy Lichtenstein, and Joan Mitchell. “I’ve worked with the client on three different projects,” he says. “Her aesthetic is so pared down and minimalist. Even though we come from very different points of view, we both appreciate what the other is bringing to the table.” The glowing results speaks for themselves.

See the standout rooms in the book below. In Corrigan’s Paris study, the wallpaper is a custom design, and the doors are embellished with gilded boiseries representing the four seasons, copies by Iksel of the originals in the Musée Carnavalet. The mirror is contemporary, the desk is Louis XV, and the staircase model is one of hundreds made in the eighteenth and nineteenth centuries by apprentice carpenters as proof of their skills. Photo: Gianni Franchellucci A guest room takes the opposite approach to color with a vivid and whimsical orange-and-cobalt scheme. The walls are upholstered in a toile, which is contrasted with striped bed hangings and curtains. Photo: Amy Barnard “Because of the lush landscaping that was added at the front of the house, the dining room needs no window coverings. The seventeenth-century painting depicts Cleopatra with an asp.” Photo: Nadine Froger “Often the most unexpected color combinations prove the most interesting and inspiring. We wanted to bring new interest to a classical room, so we contrasted the walls, which were painted celadon, with intense burnt-orange curtains and bed draperies. Unexpected colors in traditional rooms make them seem more approachable and more modern.” Photo: Jim Bartsch “In this dining room in France, I hung a 17th-century tapestry as a focal point. I love the depth and texture a tapestry brings to a room. I favor old ones for their faded colors and textures, but there are many beautiful modern tapestries as well, and they are often affordable.” Photo: Marina Faust “The guest room in the same Parisian residence is subtly embellished with a Greek-key motif on the headboard, bed hangings, and even the nightstands.” Photo: Mark Luscombe-Whyte
Cover: A room in Timothy Corrigan's new book by Rizzoli features a play of reflections with multiple mirrors. The seating and cocktail tables are from Corrigan’s furniture collection for Schumacher, and the rug is one he designed for Patterson Flynn Martin.
Photo: Richard Powers
Next Post