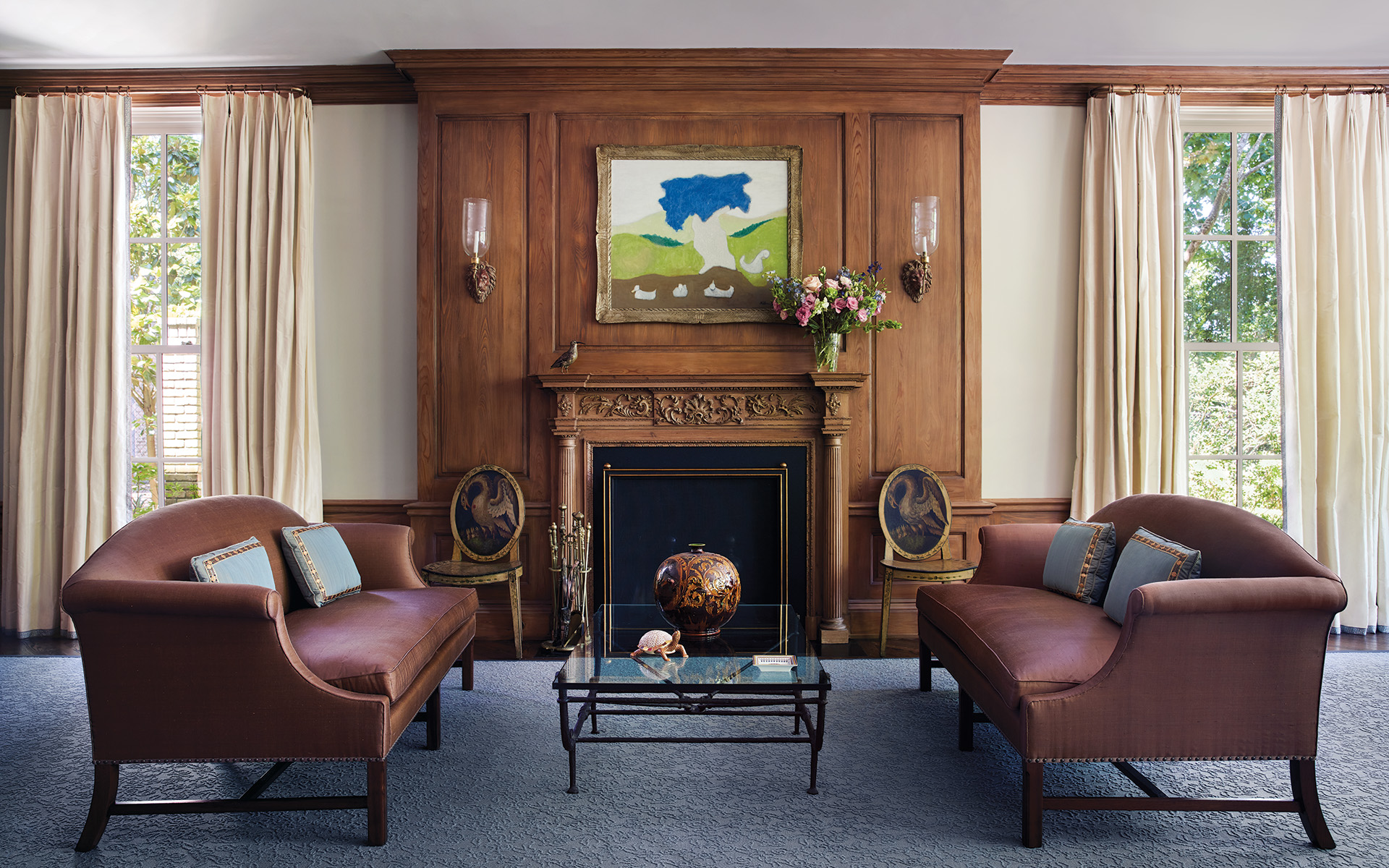 Amid the intoxicating aesthetic riot that is James McNeill Whistler’s Peacock Room at the Freer Gallery of Art in Washington, D.C., there is a jade-green door whose inset glass panels are embellished with decorative metalwork in patterns of fan shapes and interlocking rectangles. A quiet detail next to Whistler’s exquisite murals and the Orientalist shelves packed with Asian ceramics, that metalwork provided the inspiration for one of designer Thomas Jayne’s signature updates to a Houston home owned by a couple with significant collections of art and antiques, as well as—it just so happens—a love of birds. 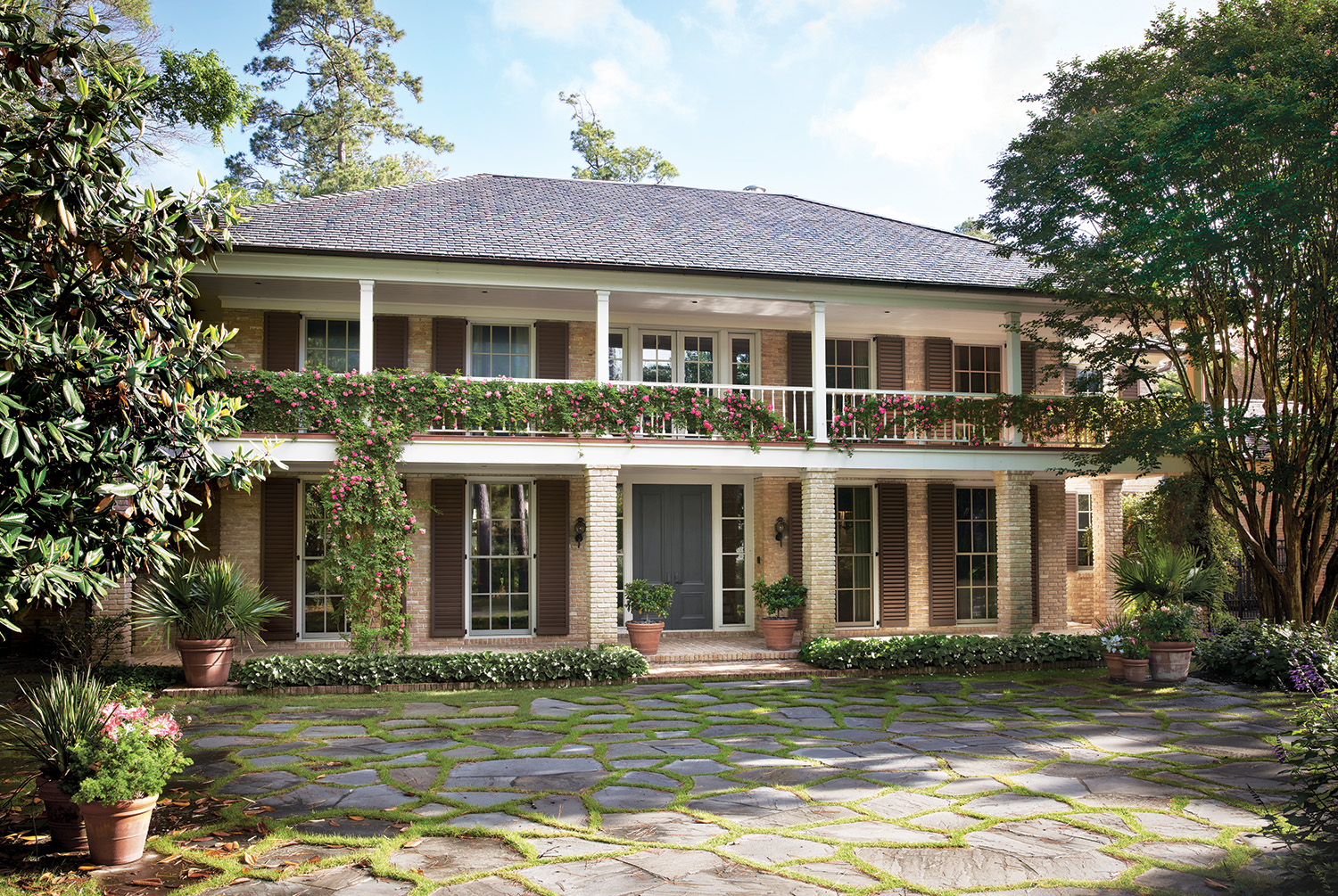 Built in the 1960s in a manner that mixes elements of Greek Revival and Texas Territorial style, the four-bedroom residence sits on a handful of acres, its rear façade overlooking an expansive garden. The owners, who hadn’t refreshed the interiors since enlisting their celebrated decorator friend, Mark Hampton, to do a traditional renovation when they bought the house in the mid-’90s, had weighed demolishing and rebuilding. Instead, they decided several years ago to hire Jayne “to open up the house to make it feel more spacious and, in a sense, more contemporary,” says the designer. 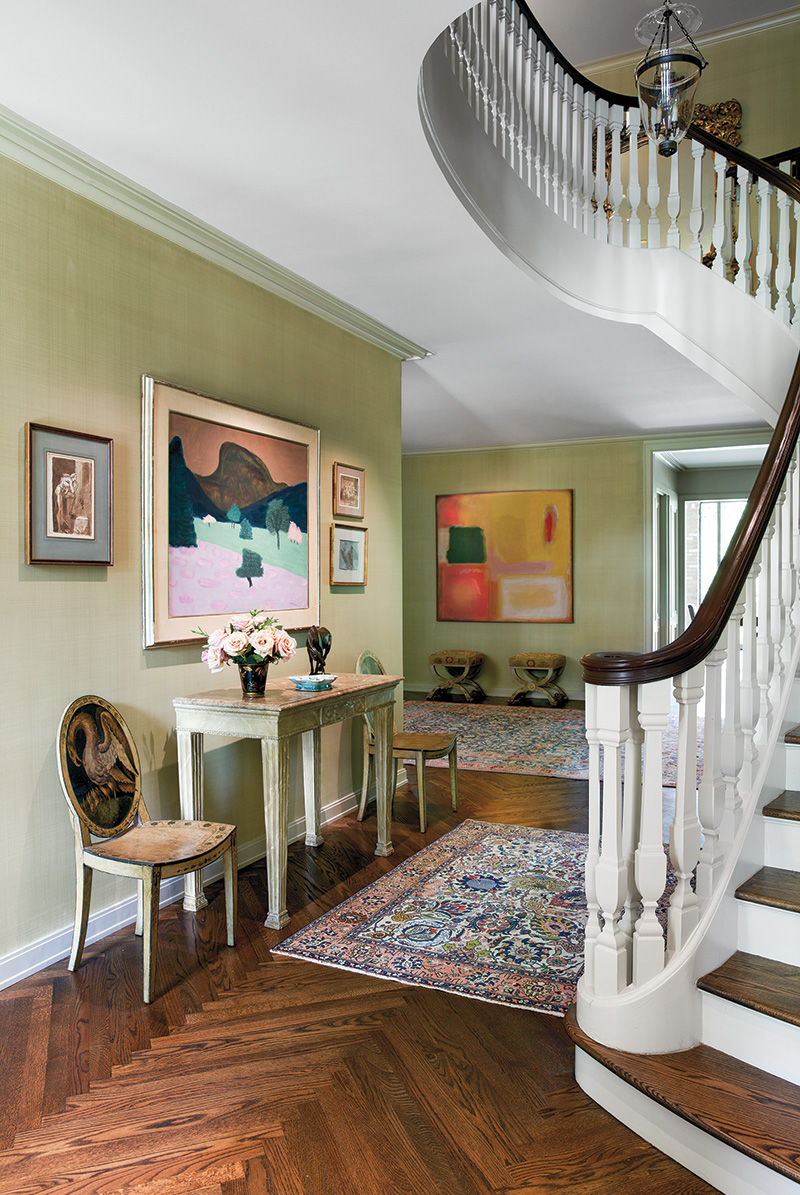 In the entrance hall, pale-green walls embellished with a subtle crosshatching by decorative painter Chris Loew play host to a luminous Mark Rothko canvas at the far end and a painting by Milton Avery that is joined by a trio of Old Master drawings over a neoclassical console and pelican chairs. Photo: Pär Bengtsson

Working closely with his associate Egan Seward, Jayne retained some of Hampton’s additions, including the entry hall’s gracefully curving staircase and the neoclassical pine mantelpiece and paneling that surround the living room fireplace. They made subtle but high-impact tweaks like raising door openings and installing simple cornices to enhance the sense of scale. “The ceilings aren’t terribly high, and the rooms didn’t have a lot of architecture. Hence, the decoration had to be somewhat low-key, so it all balanced,” says Jayne. “Also, we didn’t want to compete with the art.” 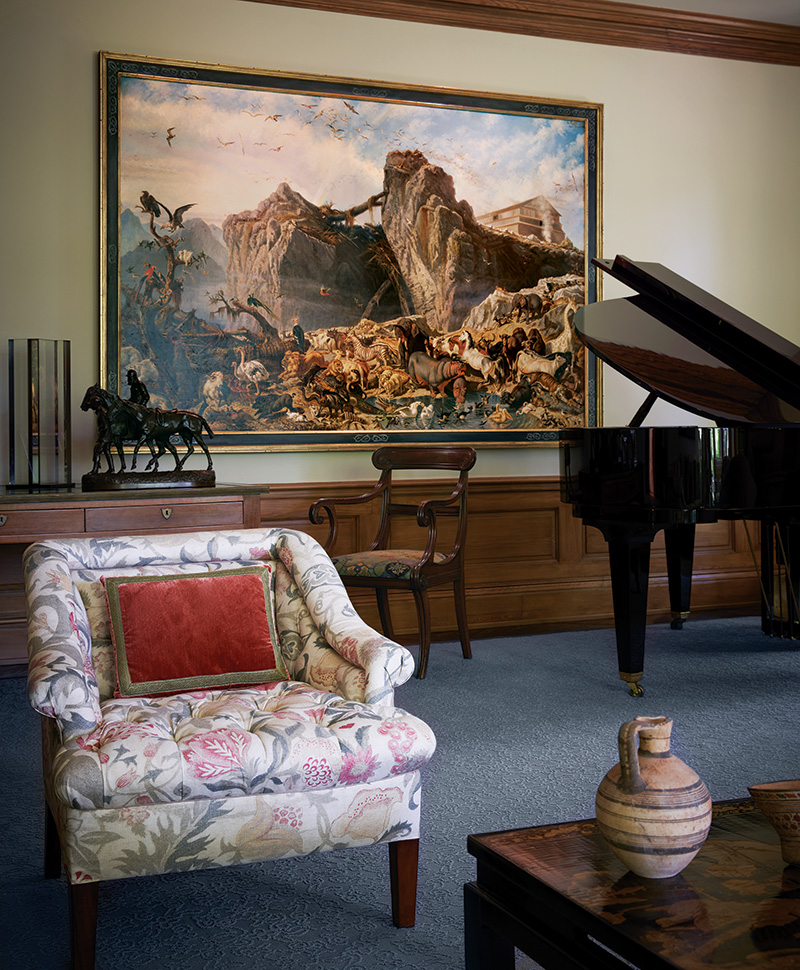 A painting of Noah’s Ark by 19th-century artist Gaetano Mormile is displayed next to the living room’s Schimmel baby grand piano; the Napoleon III–style lounge chair by Jonas is covered in a Robert Kime floral. Photo: Pär Bengtsson

That art, some of it inherited by the husband, who comes from a family of collectors, ranges from 17th- and 18th-century paintings by Jean-Baptiste Oudry and Jan van Goyen to modern works by Diego Rivera, Mark Rothko, and Milton Avery. “The art cued up many of our changes,” says Seward, “along with the desire to add air and openness and connections to the garden.” 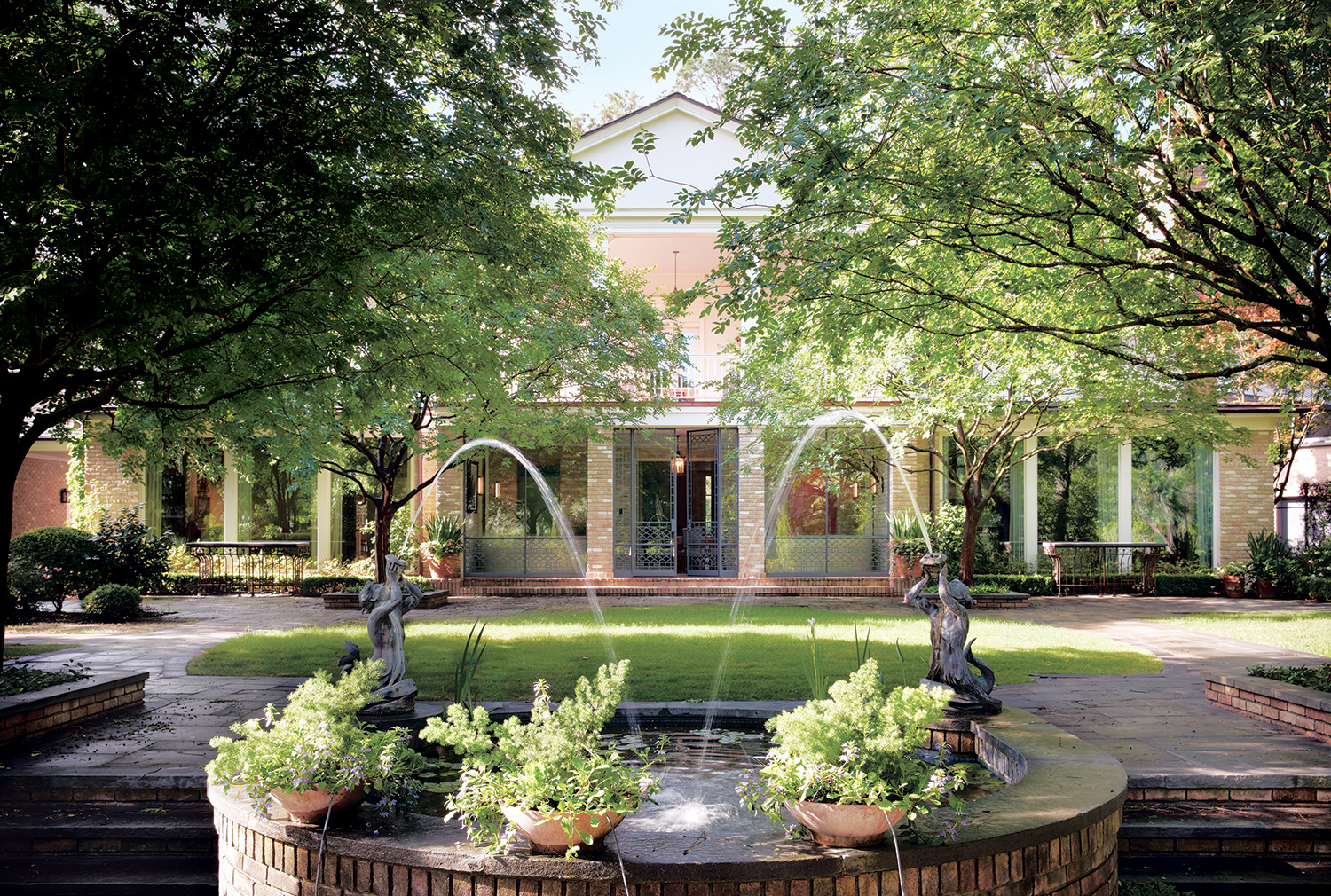 The enclosed loggia along the back of the house looks directly out to a fountain in the gardens. Photo: Pär Bengtsson

Among the first things Jayne and Seward did was consider ways to make the covered back loggia more of a focal point for everyday living and entertaining. Having decided this area should be enclosed with glass panels between its brick columns, they wanted to give it a sense of refinement on par with the sophisticated details they were introducing elsewhere. So Jayne teamed up with architectural designer John Tackett to create painted-steel grillwork for the windows and doors inspired by the Peacock Room door. The results undeniably elevate the space. “It uses the familiar vocabulary of trellis but with a different reference point,” says Seward, who, along with Jayne, has made deft historical allusions a hallmark of his work. 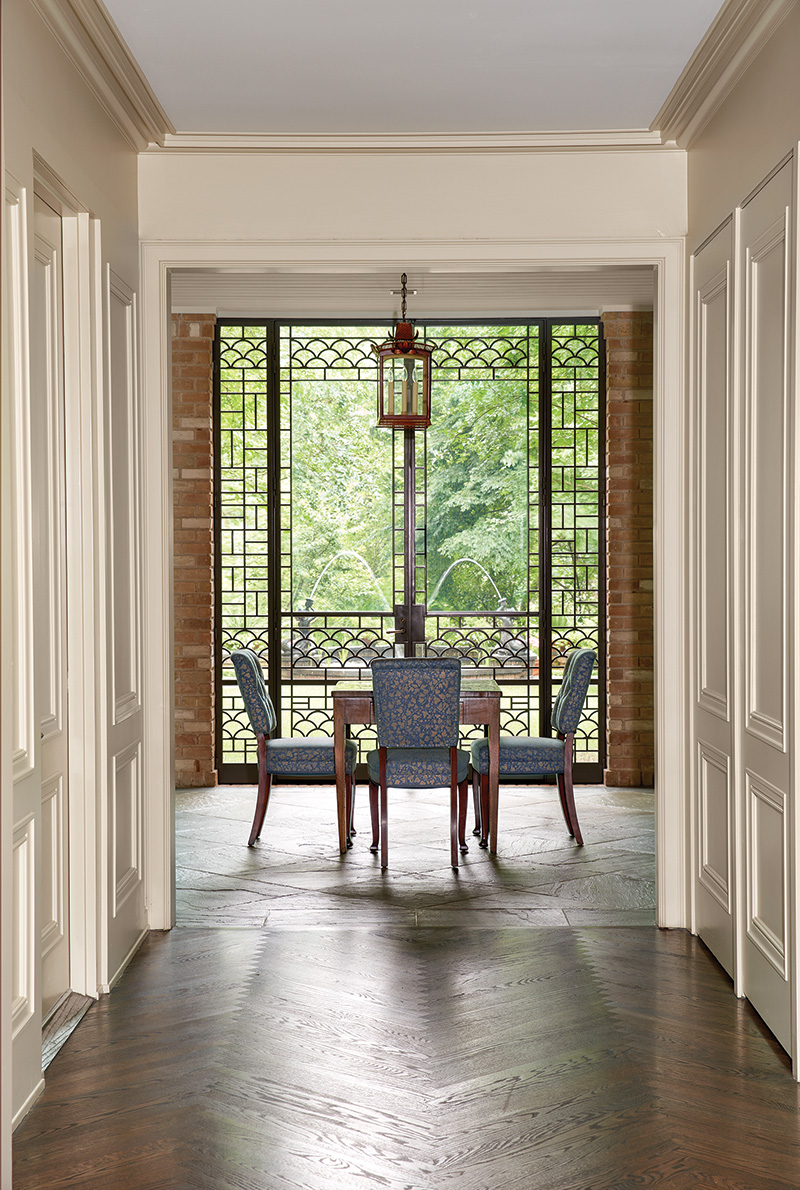 On the loggia, a Marvin Alexander pagoda-style lantern hangs above an 18th-century French games table and 1910 Danish chairs upholstered in a Fortuny fabric; the decorative painted-steel grillwork in the window behind was inspired by James McNeill Whistler’s Peacock Room at the Freer Gallery of Art. Photo: Pär Bengtsson

The Peacock Room is a particularly apt touchstone for this home, as the owners are enthusiastic birders, and an avian theme runs throughout. Antique English hall chairs painted with pelicans (and once owned by Bunny Mellon) appear in multiple rooms, starting with the entry hall, where they bookend a neoclassical console beneath a vibrant Avery landscape. Upstairs, the primary bedroom’s walls are covered in a pale celadon chinoiserie paper featuring wispy trees painted with species common to southeastern Texas, such as the American kestrel, the great kiskadee, and the cerulean warbler. 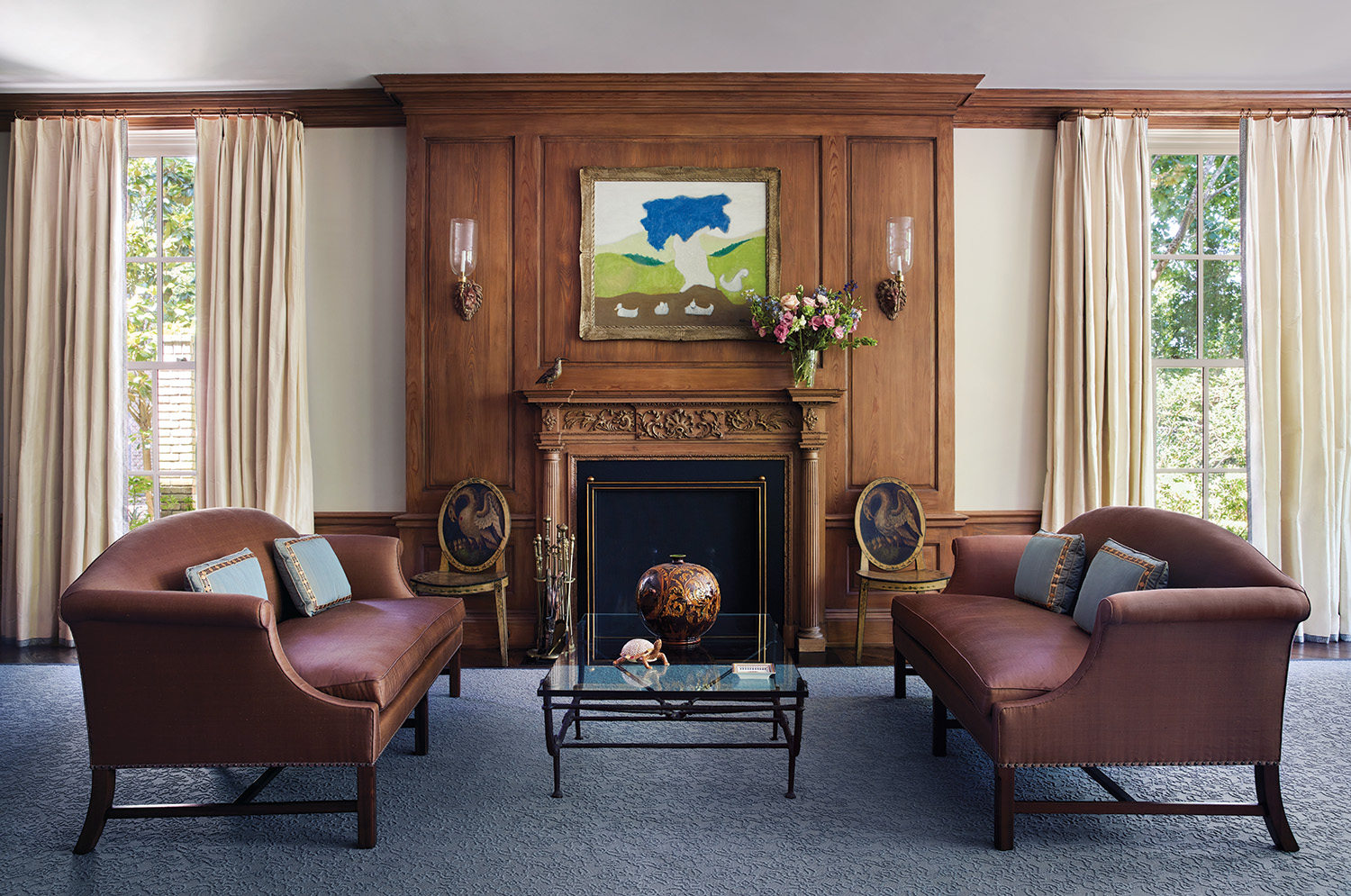 A painting by Milton Avery adds a modern touch to the living room’s 18th-century mantelpiece and pine paneling, elements from a 1990s renovation by Mark Hampton that designer Thomas Jayne and his associate Egan Seward preserved in their refresh of the early ’60s Houston home. Sofas copied from a George II original face a vintage cocktail table in the style of Diego Giacometti, while a pair of antique English hall chairs painted with pelicans—from a set of eight that were once owned by Bunny Mellon—flank the fireplace. The custom-made rug is by Mitchell Denburg. Photo: Pär Bengtsson

Off the library, Jayne created a room dedicated to the couple’s prints and folios, highlighted by the naturalist works of artist John James Audubon. The intimate, jewel-tone space is wrapped in cypress millwork inset with hand-painted panels. “It almost has a folly aspect to it,” says Jayne.

That same level of custom detailing can be seen in elements such as the dining room’s embossed leather chair seats and curtains trimmed in a floral embroidery made in Madagascar based on an antique Indian fabric. In the living room, the bespoke raised cut-pile rug is a minimalist update on a traditional Persian floral pattern, an example, Jayne says, of how he likes to meld “ancient and modern.” 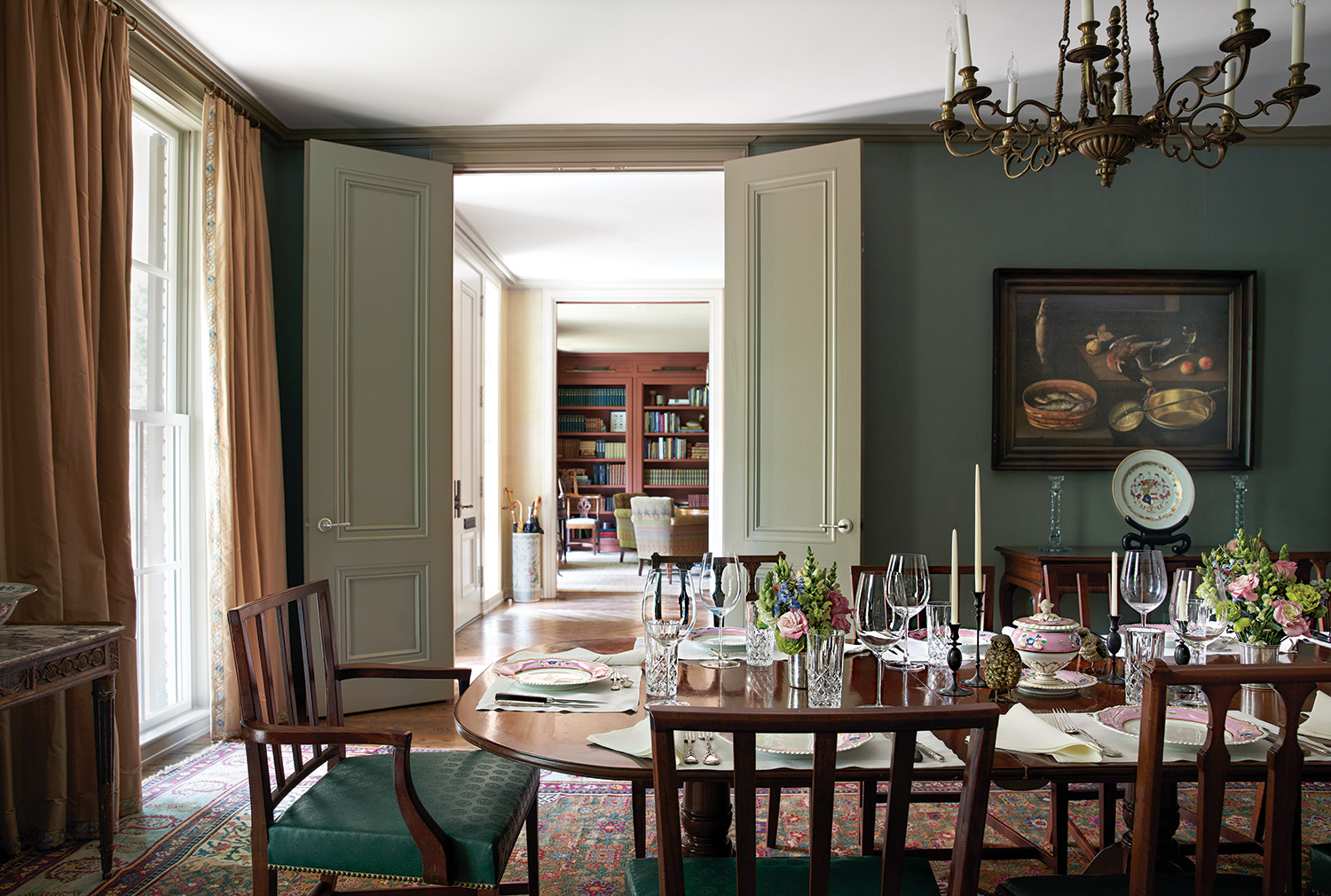 Gracie wallpaper panels provide a richly toned backdrop for a 17th-century Dutch still life in the dining room, where Jayne reupholstered the owners’ George III and Adam-style chairs with seats of embossed leather; the curtains were made in a Claremont fabric with embroidered trim by Simon Peers. Photo: Pär Bengtsson

The furnishings are a mix of the clients’ antiques—refurbished and reupholstered—and new pieces Seward describes as “very traditional forms but all fairly low and tailored.” Seward custom-designed suites of furniture for both ends of the loggia, including matching curved sofas. Perched at the center is an 18th-century French games table with Danish chairs from 1910, a favorite spot of the husband’s for playing backgammon.

Love Letter to My Home: Thomas Jayne in New York 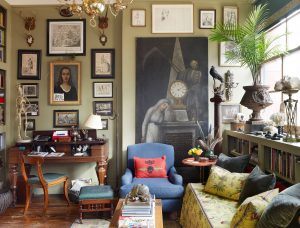 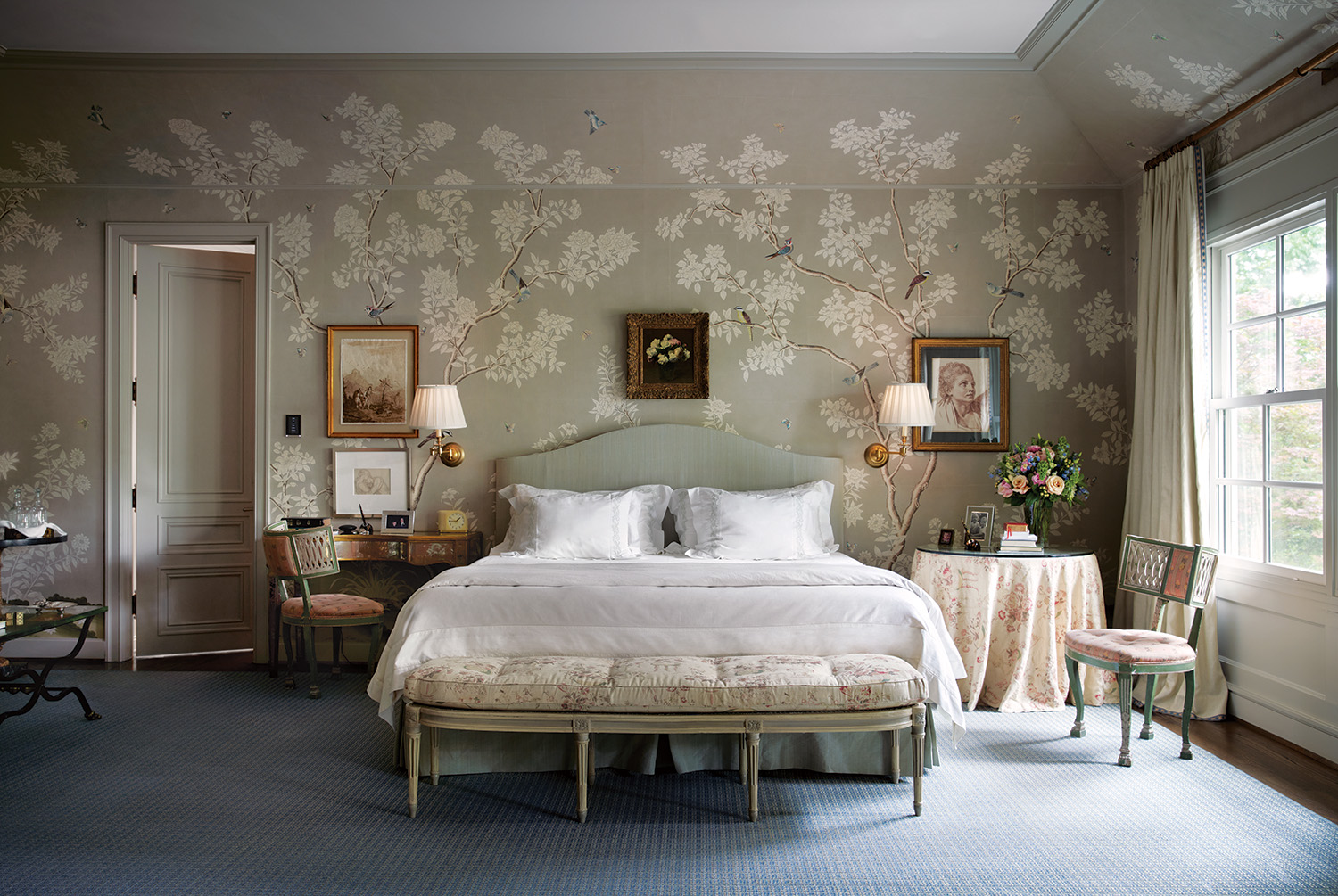 In the primary bedroom Jayne created a cove ceiling and clad the walls in a Gracie wallpaper custom painted with bird species common to the region. Old Master drawings and a Henri Fantin-Latour floral still life overlook the bed made by Jonas and an antique French caned bench cushioned in a Robert Kime linen. A 19th-century table serves as a nightstand on one side and a Robert Kime fabric skirts a circular table on the other. The swing-arm lamps are by Vaughan, and the painted chairs are circa 1810. Photo: Pär Bengtsson

For her part, the wife loves retreating to their bedroom terrace above, looking out over the garden where landscape designer Johnny Steele planted “a beautiful variety of camellias and gardenias,” she says. “We have incredible birdlife out there.” The only thing missing? Perhaps a peacock or two.

A version of this article first appeared in print in our 2022 Fall Issue under the headline “Top Flight.” Subscribe to the magazine.