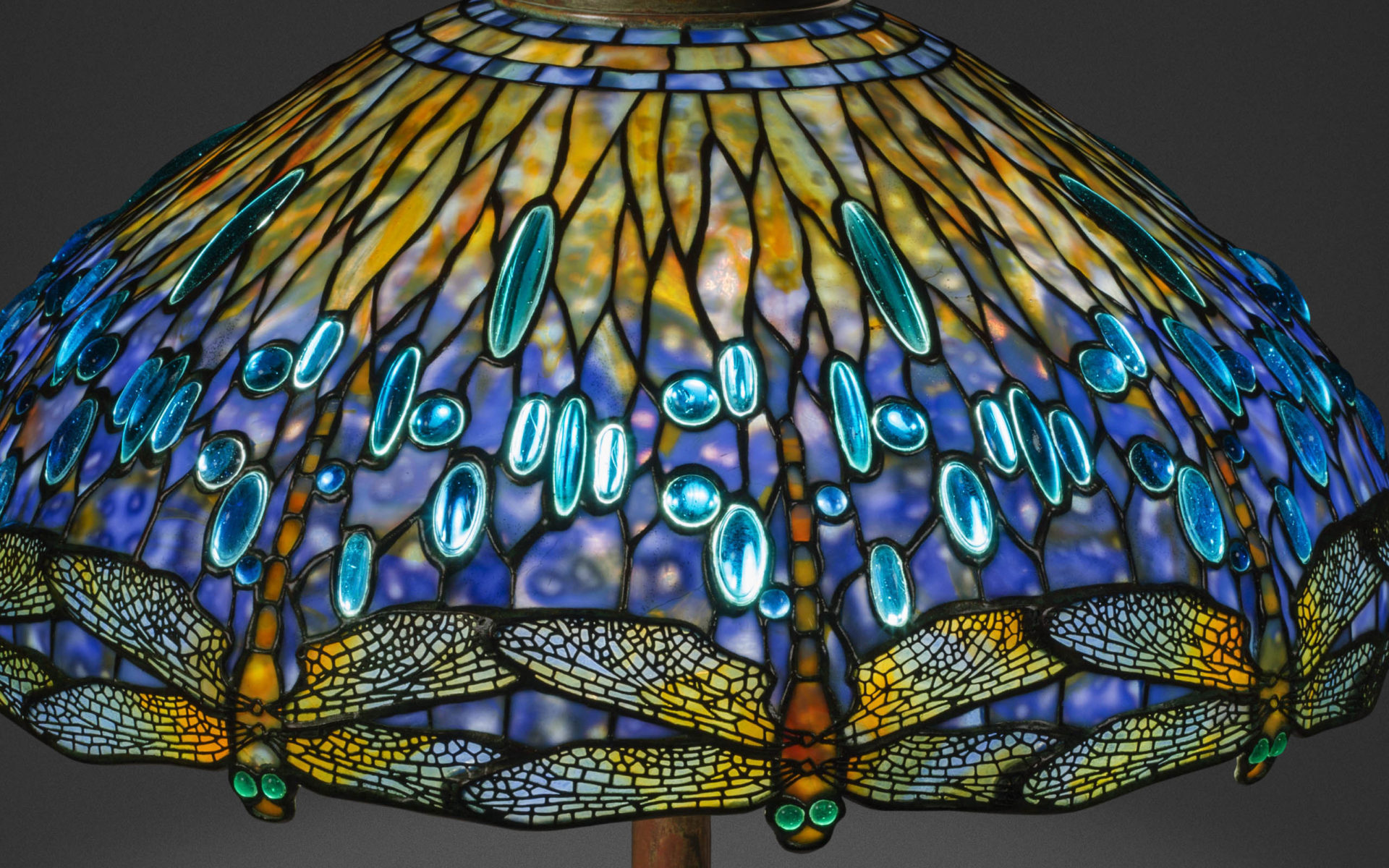 This Dragonfly table lamp made of glass and bronze, ca. 1900–06, is an example of the often unrecognized contributions by Tiffany's female employees
Photo: Courtesy of the New-York Historical Society

In 1903, the all-male glazier’s union threatened a strike at the Louis Comfort Tiffany factory. The reason? The female employees, who selected and cut the stained glass for the esteemed American company’s gorgeous lamps, were paid the same as the men who assembled them—unheard of at the time.

The incident, along with other unsung contributions from the so-called “Tiffany Girls,” is the focus of a two-story display that opens at the New-York Historical Society on April 29.

“We’ve gone to extraordinary lengths to provide them a permanent home,” says museum director Margaret K. Hofer of the world-class collection of Tiffany objects. The elaborate installation offers 100 jewel-toned lamps encased in custom-designed curved glass, playful interactive displays that allow visitors to design their own digital lampshades, historic video projections, and drawers upon drawers filled with original design sketches.The installation is the linchpin of a newly redesigned fourth floor of the Central Park West institution that puts more of an emphasis on women’s history. The glass staircase in the Tiffany Gallery, adjacent to the Center for the Study of Women’s History at the New-York Historical Society. Photo: Eva Jiricna Architects

The exhibition breaks out, for example, the contributions of Clara Driscoll, among other Tiffany Girls. Driscoll has been credited by many historians as the creator behind some of the brand’s most stunning Art Nouveau designs, including the pattern of the so-called Dragonfly lamp.  A skilled designer who had studied at the Metropolitan Museum of Art school, she was hired at age 27 by Tiffany but forced to leave a year later when she married. (As was the common policy of the time, married women were not allowed to be employed at the company). Widowed in 1892, she returned to the firm and worked until her second marriage in 1909. Clara Driscoll of Tiffany’s women’s glass cutting department is featured in the current exhibition. Photo: Courtesy of the Department of American Decorative Arts, the Metropolitan Museum of Art, New York

She eventually rose to become supervisor of the women’s division, but her contributions were largely unrecognized. It wasn’t easy for Driscoll, Hofer notes, especially later in her career, as “she was under pressure to simplify her designs” so the company could make them cheaper and more quickly.

The museum’s entire collection of Tiffany lamps was compiled by collectors Dr. Egon and Hildegarde Neustadt, whose collecting obsession began in the 1930s after spotting a lamp at a Greenwich Village store. A large portion of their collection was donated to the museum shortly before Egon’s death in 1984. This gorgeous Dragonfly table lamp is said to be attributed to Clara Driscoll. Photo: Courtesy of the New-York Historical Society

Mainly spanning 1899 through the 1920s, some of the earliest Tiffany lamps were designed to be used with fuel and later converted to electricity. Their popularity grew in tandem with the acceptance and availability of the incandescent light bulb–although Clara Driscoll, curiously, never had electricity in her Irving Place apartment. A detail of the Trumpet Creeper table lamp. Photo: Courtesy of the New-York Historical Society

At their time of creation, the most expensive Tiffany lamp was the Cobweb lamp, which retailed for about $500, then the price of new Ford automobile, notes Hofer. Among the cheapest offerings was Tiffany’s blown-glass Student lamps sold for about $30. Today, the auction record for a Tiffany lamp stands at $2.8 million for a circa 1905 unique Pink Lotus lamp that sold at Christie’s in 1997.

Cover: This Dragonfly table lamp made of glass and bronze, ca. 1900–06, is an example of the often unrecognized contributions by Tiffany's female employees
Photo: Courtesy of the New-York Historical Society
Next Post