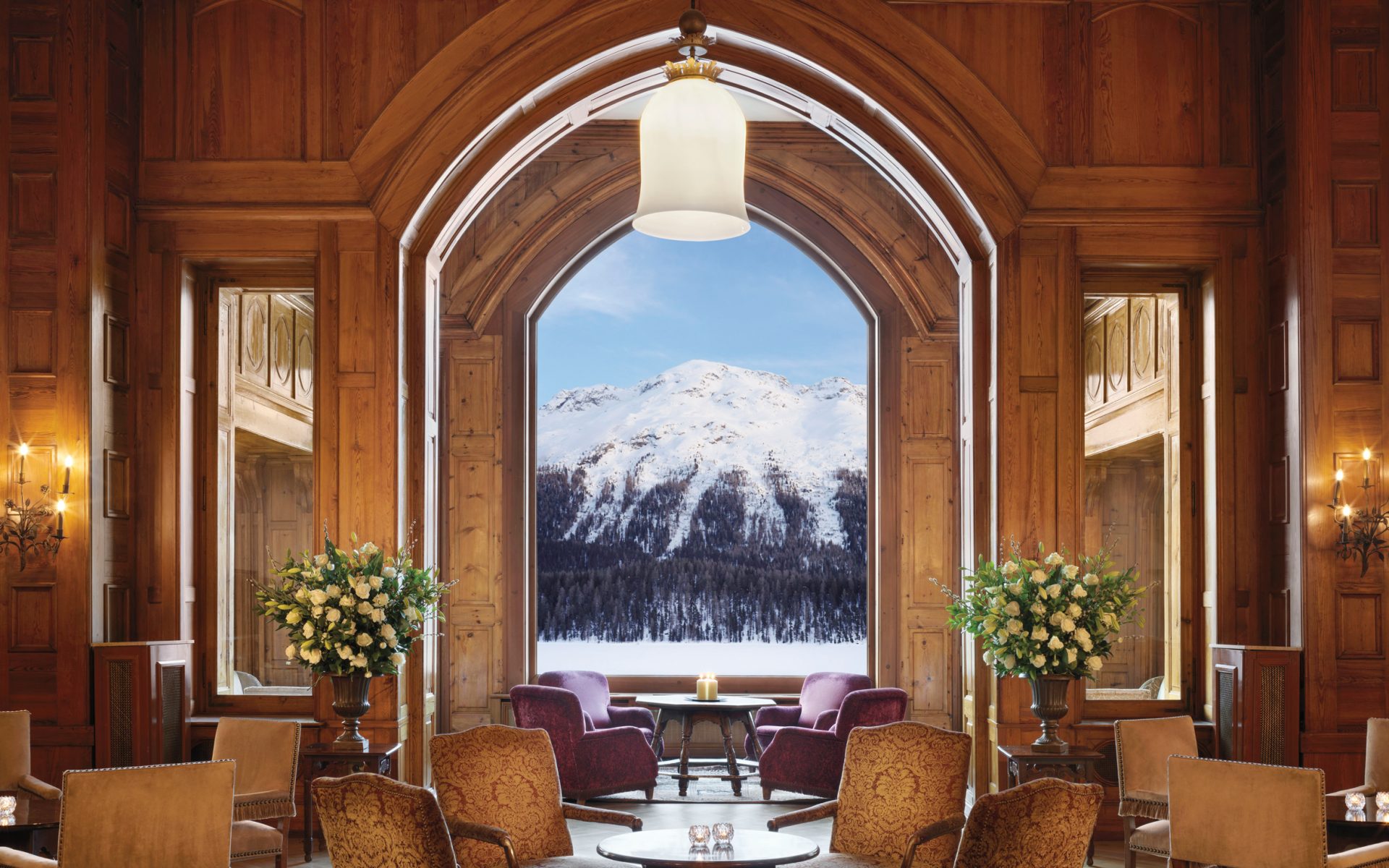 See Why the Art World Is Flocking to Saint Moritz

New galleries, a soon-to-open museum, and the return of a unique art fair add to the Swiss city’s cultural cachet

In Saint Moritz, most things blessedly never change—the parade of trapeze-cut mink coats swaying through the lobby of the circa-1896 Badrutt’s Palace Hotel, the hot chocolate at Hanselmann, and the fondue nights at Restaurant Engiadina are forever.

So is the spectacular beauty of the Engadine valley in southern Switzerland, which is where Saint Moritz, the most glamorous ski resort on the planet, is located. It’s as unblemished today as it was when the area became the world’s first alpine winter resort in the middle of the 19th century. And while the martinis at Mario’s, the bar at Badrutt’s, remain almost raspingly bone-dry from one year to the next, the chatter in this intimate venue changes from season to season. Last year, there was a lot of sotto voce fretting that the Russians (and not the right ones) were coming—and coming. There was also ongoing speculation about whether the Niarchos family would finally decide to link the Engadine’s four separate ski domains—Corviglia, Corvatsch, Daivolezza, and Lagalb—to create a supersize ski resort like the one that debuted in Austria in December 2016. This winter, Saint Moritz’s smart regulars are all about art, since the Engadine valley is in the midst of an ever-accelerating cultural renaissance. To be sure, this sky-high resort has always had a creative edge, what with local talents like Giovanni Segantini, Alberto Giacometti, and Not Vital spanning both time and mediums. And there’s always been a serious crowd of collectors here, too.

The legendary Bruno Bischofberger was the first to open a gallery in Saint Moritz, in 1963, and for years everyone tried to wangle an invite to see the ten Andy Warhol portraits of Marilyn Monroe that once hung on the walls of German playboy Gunter Sachs’s penthouse in Badrutt’s. Art dealer and writer Kenny Schachter has been spending holidays here for 25 years. Skiing has lured adventurous travelers to the glamorous alpine village of Saint Moritz since the mid-19th century. Photo: Filip Zuan/SwissImage.CH

But now Saint Moritz and the Engadine valley are coming on strong as a bohemian-flavored art-world favorite and a serious place to buy pieces in the many new galleries that are discreetly opening in a landscape that remains defined by solid old stone farmhouses with sgraffito façades, church spires, and forests of snow-laden pines. The Vito Schnabel Gallery opened in Bischofberger’s former gallery space, a Bauhaus-looking building in Saint Moritz, with an Urs Fischer exhibition in December, 2015; this year, the gallery features a show of new and recent sculptures by Tom Sachs. “We’ve shown a variety of work—from painting and sculpture to video installations, from historical to contemporary,” says Schnabel. “Several of the artists we work with have created new pieces specifically for exhibitions in Saint Moritz, inspired by the Engadine valley. The valley has a rich history of artists making work in the area, from Jean-Michel Basquiat and Andy Warhol to my father, Julian Schnabel. For over a century it’s been a destination for artists, collectors, curators, and academics. But it’s wonderful to see the area getting more attention from broader audiences and new generations as more and more art spaces open.” A whole day (or two) can easily be spent visiting the other spaces in Saint Moritz, including Galerie Andrea Caratsch and Galerie Karsten Greve. The von Bartha gallery in the Engadine village of S-chanf features a show of Sarah Oppenheimer sculptures until January 28, 2019, and the just-opened Saint Moritz branch of venerable gallery Hauser & Wirth, designed by architect Luis Laplace, will exhibit work by Louise Bourgeois come January.

Nomad St. Moritz, the traveling showcase for collectible design and contemporary art, sets up in the Chesa Planta, a beautiful, white 16th-century house in the village of Samedan, for its second edition in February (7 to 11). “Visitors will discover a truly unique dialogue between the architecture and installations,” says the fair’s cofounder Nicolas Bellavance-Lecompte. “The collectors are already based there, and the international visitors coming will definitely confirm that Saint Moritz is a great art and design destination.” To the uninformed who thought Saint Moritz was all about skiing, ice cricket, dogsledding, and polo, this burgeoning art scene is a welcome surprise. “There is a growing ecosystem of artists, galleries, and events in the Engadine valley, and Muzeum Susch will add a fundamental value,” says Polish collector Grazyna Kulczyk, who is opening the private museum in January 2019. Set on the site of a 12th-century former monastery and brewery in the remote town of Susch, it will debut with an exhibition from Tate Liverpool senior curator Kasia Redzisz encompassing works that explore gender roles and the idea of femininity by more than 30 international artists.

Afterward, the museum will house a number of site-specific installations as well as other temporary exhibits, many influenced by Kulczyk’s robust collection. “The remote, rural choice of location provides an immersive contrast that amplifies the disruptive mission of the institution,” she says. “It is a unique site surrounded by the same dramatic landscape that inspired Friedrich Nietzsche and Thomas Mann. It is a place away from the everyday where there is more of a chance to slow down, to appreciate art, and to think differently.”

A version of this article first appeared in print in our 2018 Winter Issue under the headline Art in the Alps. Subscribe to the magazine.