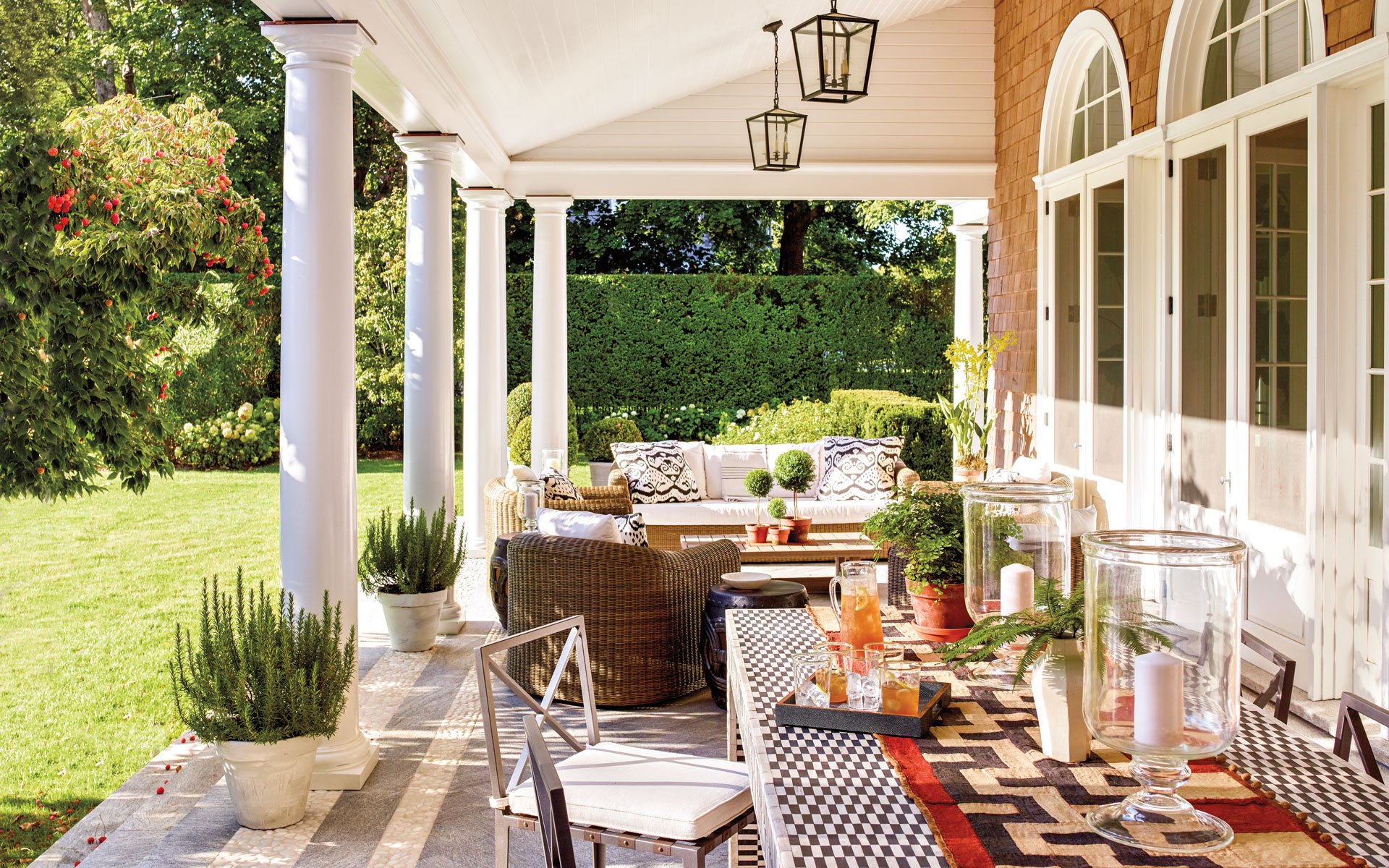 At an East Hampton home renovated by Randy Correll of Robert A.M. Stern Architects and designer Dara Stern, Circa Lighting lanterns are installed on a terrace above a table accented with a Kuba cloth runner and surrounded by RH chairs. The hurricanes and tray are by Mecox, and the faceted vase is by Hitoshi Kato from Roman and Williams Guild.
Photo: ERIC PIASECKI. STYLED BY PHILIPPA BRATHWAITE

On a lane of towering sycamores, with the sound of ocean waves crashing on a nearby East Hampton beach, stands a gracious cedar-shingle house with expansive, columned porches bordered by swells of hydrangea, boxwood, and Russian sage. Everything about the residence, thoughtfully tailored to maximize comfort and emphasize connections between indoors and out, exudes luxuriously low-key living. 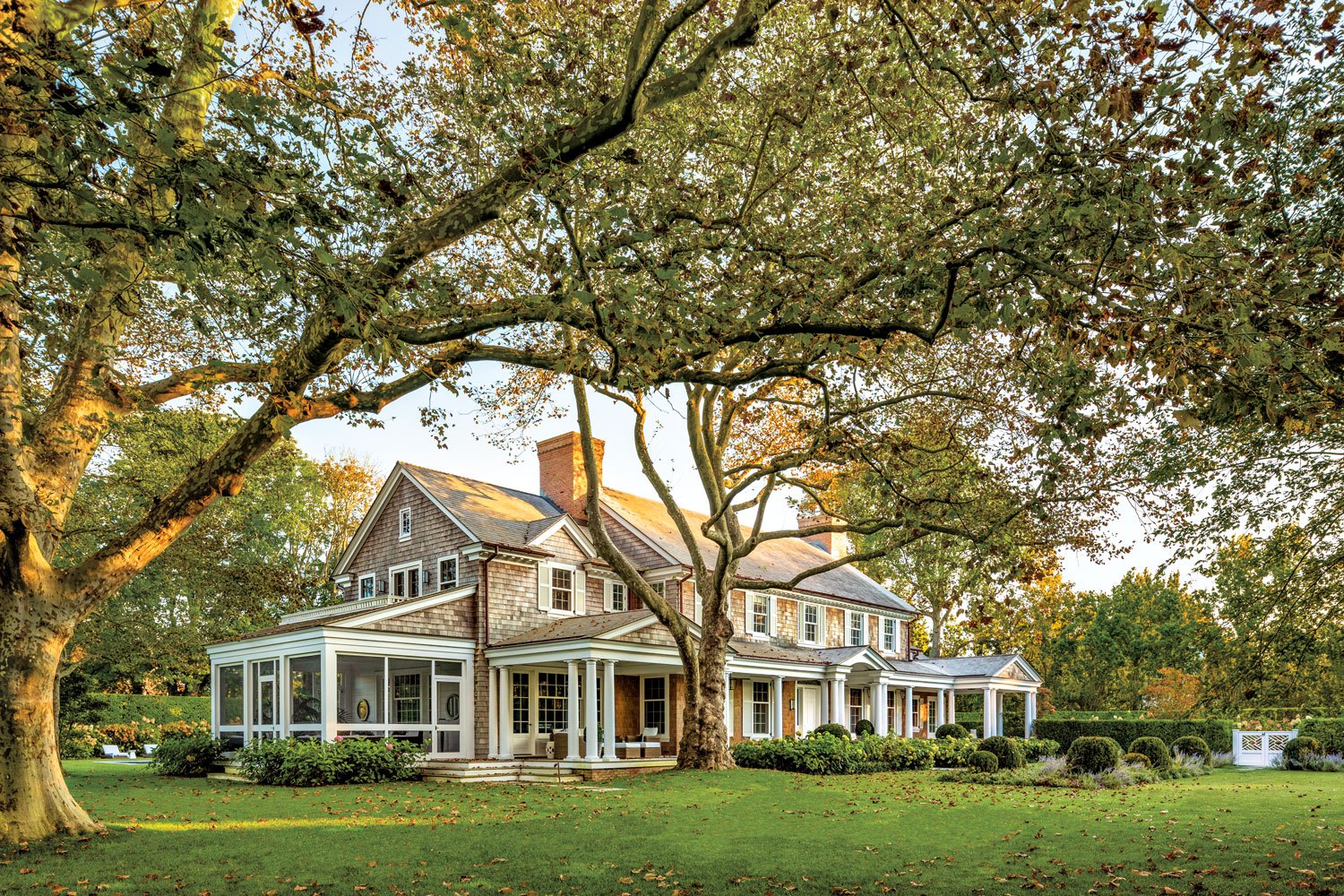 Architect Randy Correll rebuilt the central portion of the house, raising the ceiling heights, and added columned porches to the front that were inspired by a 19th-century McKim, Mead & White home nearby. Photo: ERIC PIASECKI. STYLED BY PHILIPPA BRATHWAITE

The picture was considerably different a few years ago, when a couple purchased the 8,000-square-foot home, composed of three connected white clapboard boxes built in the 1920s. “It looked like a ho-hum Leave It to Beaver Colonial house,” says Randy Correll, a partner at Robert A.M. Stern Architects, the firm hired by the new owners to oversee a renovation. With small windows, few doors, and only a tiny backyard porch overlooking a featureless lawn, the dwelling almost seemed to shun its enviable setting.

Inside, eight-foot-high ceilings capped the ground-floor living spaces, making them feel squat and dark. “It was really oppressive,” says Correll. “Most people, given the price of the lot, would have viewed a house like this as a teardown.” 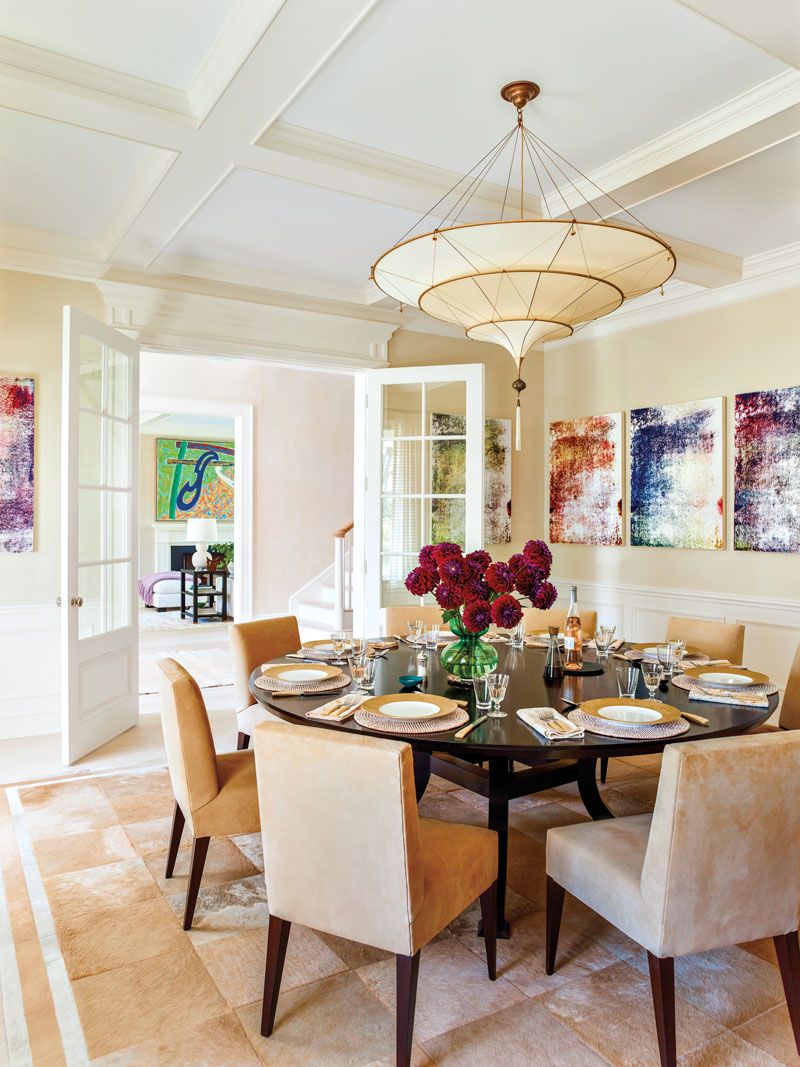 Paintings by Israel Lund encircle the dining room, where a Fortuny light fixture hangs above a custom-made table by Classic Cabinets and chairs by Luther Quintana; the suede chair fabric and cowhide rug are by Dualoy. Photo: ERIC PIASECKI. STYLED BY PHILIPPA BRATHWAITE 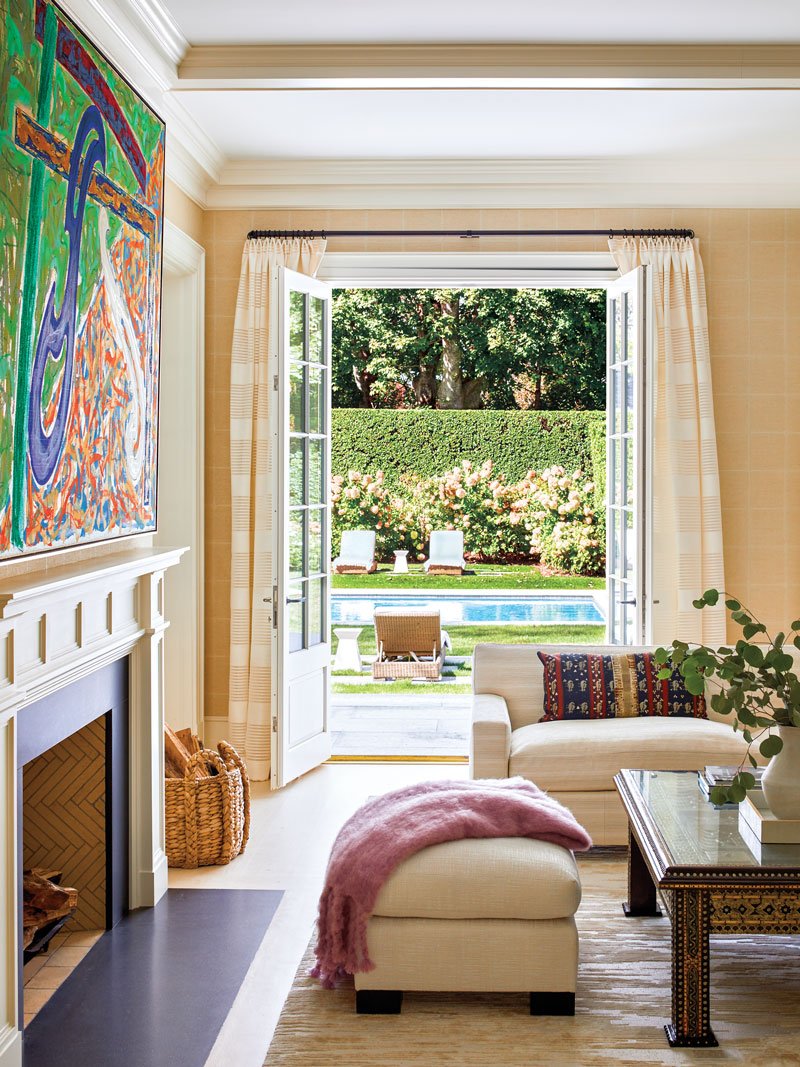 A work by Frank Stella presides over the living room, where custom-made sofas and an ottoman by Luther Quintana surround a Moroccan cocktail table; the upholstery, accent pillows, and curtains are all Holly Hunt fabrics, and the rug is by Beauvais Carpets. Photo: ERIC PIASECKI. STYLED BY PHILIPPA BRATHWAITE

His clients, however, saw a diamond in the rough and directed Correll and his team to work with it. Avid art collectors and fans of the proud simplicity of New England farmhouses, they asked him to craft a home that married a laid-back beach house sensibility with the rugged refinement of a country manor.

One of Correll’s inspirations was a nearby late-19th-century house by McKim, Mead & White. Specifically, it provided a model for the long front porch he designed with graceful, muscular columns and generous outdoor sitting areas at either end. Correll also changed the home’s siding to cedar shakes, as well as completely reconfiguring the windows and adding multiple sets of French doors to enhance access and views to the outdoors while filling the interiors with abundant natural light.

But his most audacious plan was to slice horizontally through the entire main volume of the house above the first floor, so he could jack up the second floor and roof to raise the ceilings in the living and dining rooms by two and a half feet. As work got under way, however, the construction team made the case that they could demolish and rebuild that portion of the house entirely for roughly the same cost, with the added benefit of a new poured-concrete foundation.

“The home is all about the indoor-outdoor experience. It’s just a joy to be there”

The architect and owners agreed, though they opted to retain one of the original wings, which now contains a dramatically reconfigured kitchen and a double-height family room. On the opposite side of the central living and dining areas, Correll created a library finished in midnight-blue-lacquered paneling with a cast-glass fireplace and a screened porch. 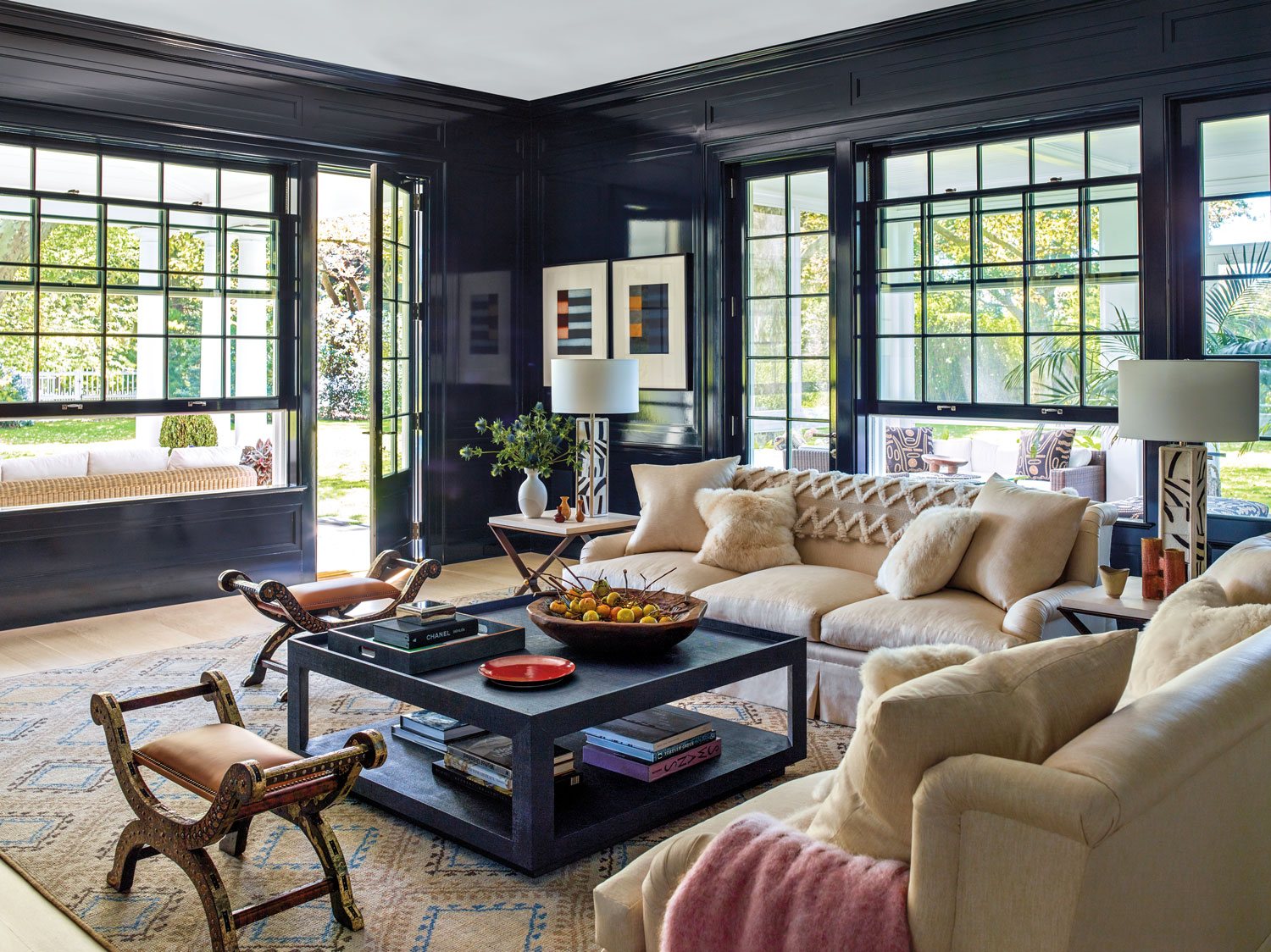 In the library, dusky lacquered walls provide a contrasting backdrop for Sean Scully artworks and sofas upholstered in a creamy Rogers & Goffigon fabric. The cocktail table, custom designed in the style of Karl Springer, is topped by a Vedran Jakšić bowl from Roman and Williams Guild. Photo: ERIC PIASECKI. STYLED BY PHILIPPA BRATHWAITE

“Through an assignment abroad, the wife had made contacts with furnishings resources in Morocco, and I loved the pattern and character they added to the spaces,” says the designer, who installed Moroccan cocktail tables in the living and family rooms, stools in the library, and nightstands in the master bedroom. “For the most part, I kept the palette neutral and emphasized texture over color or pattern.” 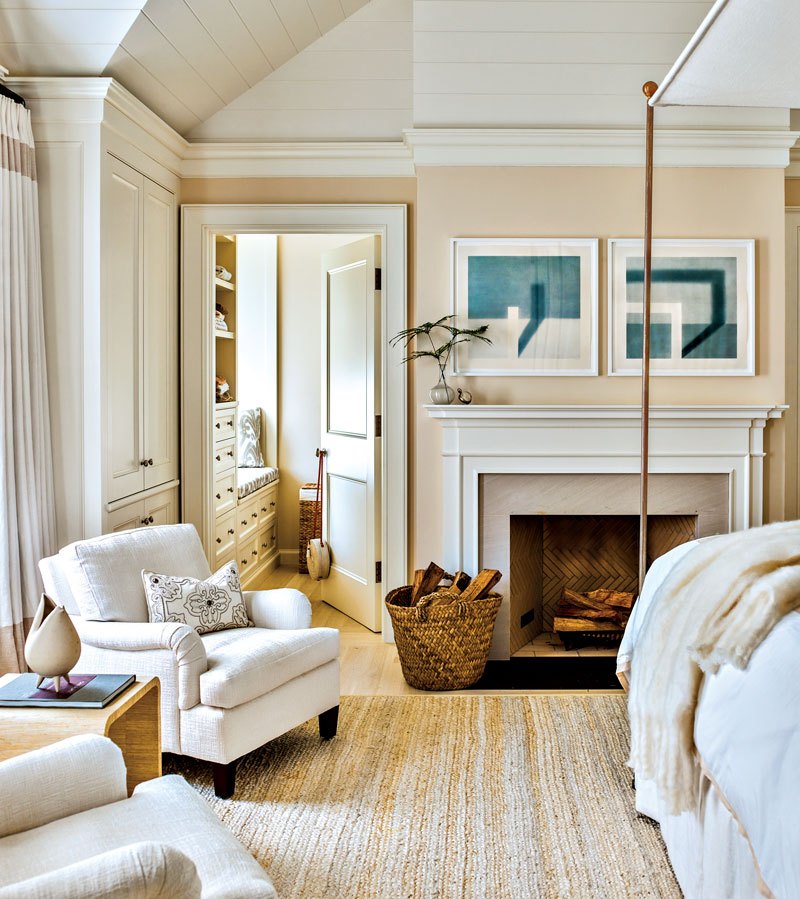 In the master bedroom, armchairs crafted by Luther Quintana in a Holly Hunt fabric are paired with a rug by Stark Carpet; the fireplace is a custom design by Robert A.M. Stern Architects. Photo: ERIC PIASECKI. STYLED BY PHILIPPA BRATHWAITE

The subdued hues also work well as a backdrop for the couple’s collection of mostly colorful, largely abstract art. “It kept me on my toes,” says Stern, who conceived her design scheme around pieces by Frank Stella, Howard Hodgkin, Sterling Ruby, and others.

Landscape designer Justin Terzi oversaw the lush gardens, building on Correll’s decisions to relocate the driveway from the front to the side of the house and shift the pool so it aligns with views from the living room, library, and master bedroom. Terzi drew inspiration from traditional French gardens but kept the overall vibe relaxed. “I did a formal rose garden and a parterre on either side of the pool, and I planted a ton of white hydrangeas everywhere,” he says. “I also created an allée of dogwood trees along the driveway, and where there were already beautiful cherry trees, I added more.” 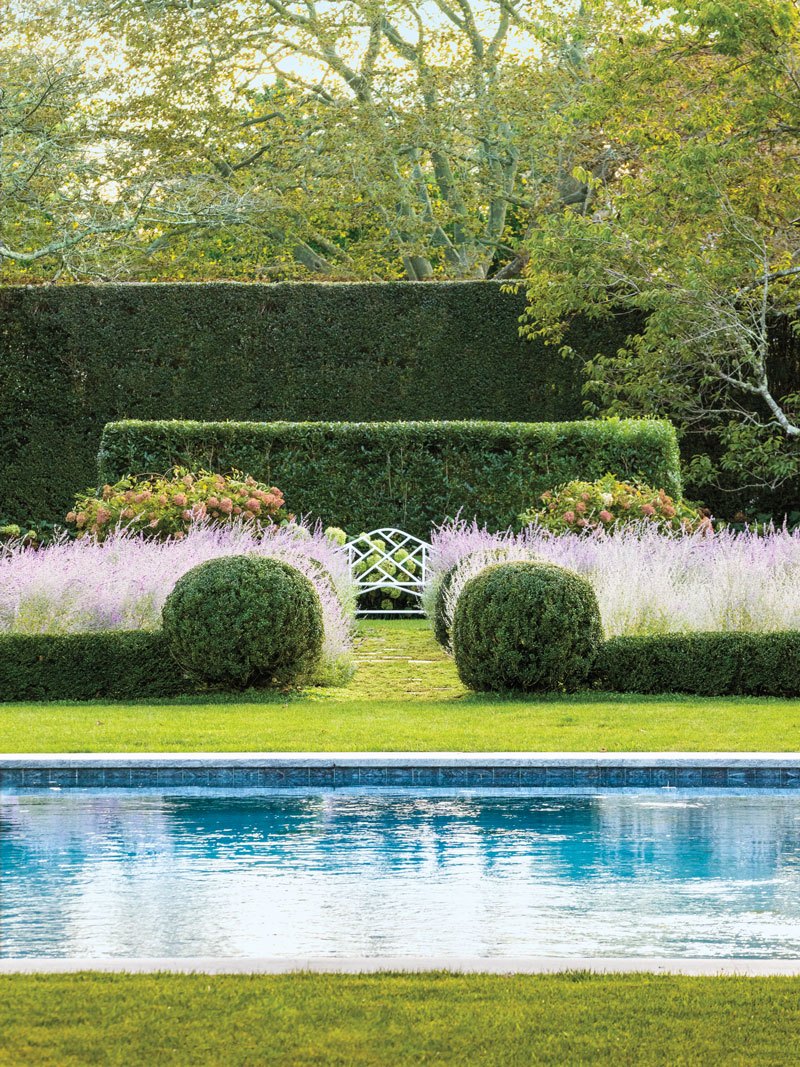 Near the pool, landscape designer Justin Terzi created a parterre of boxwood and Russian sage divided by a stone path leading to a Chippendale iron bench. Photo: ERIC PIASECKI. STYLED BY PHILIPPA BRATHWAITE

He finished it off with a bountiful vegetable garden tucked behind a manicured hedge. “That’s for the husband,” he says, “because he loves to cook.” It’s not unusual to find him spending lazy late afternoons tending the grill for meals enjoyed by family and friends in the rose garden when they’re not all relaxing on the porches or taking dips in the pool.

Together, the design team created a whole new personality for the house, giving it fresh life. “If before it felt like going into a cave,” says Correll, “now it’s all about the indoor-outdoor experience. It’s just a joy to be there.”

A version of this article first appeared in print in our 2020 Summer issue under the headline “Open Invitation.” Subscribe to the magazine.

Cover: At an East Hampton home renovated by Randy Correll of Robert A.M. Stern Architects and designer Dara Stern, Circa Lighting lanterns are installed on a terrace above a table accented with a Kuba cloth runner and surrounded by RH chairs. The hurricanes and tray are by Mecox, and the faceted vase is by Hitoshi Kato from Roman and Williams Guild.
Photo: ERIC PIASECKI. STYLED BY PHILIPPA BRATHWAITE
Next Post