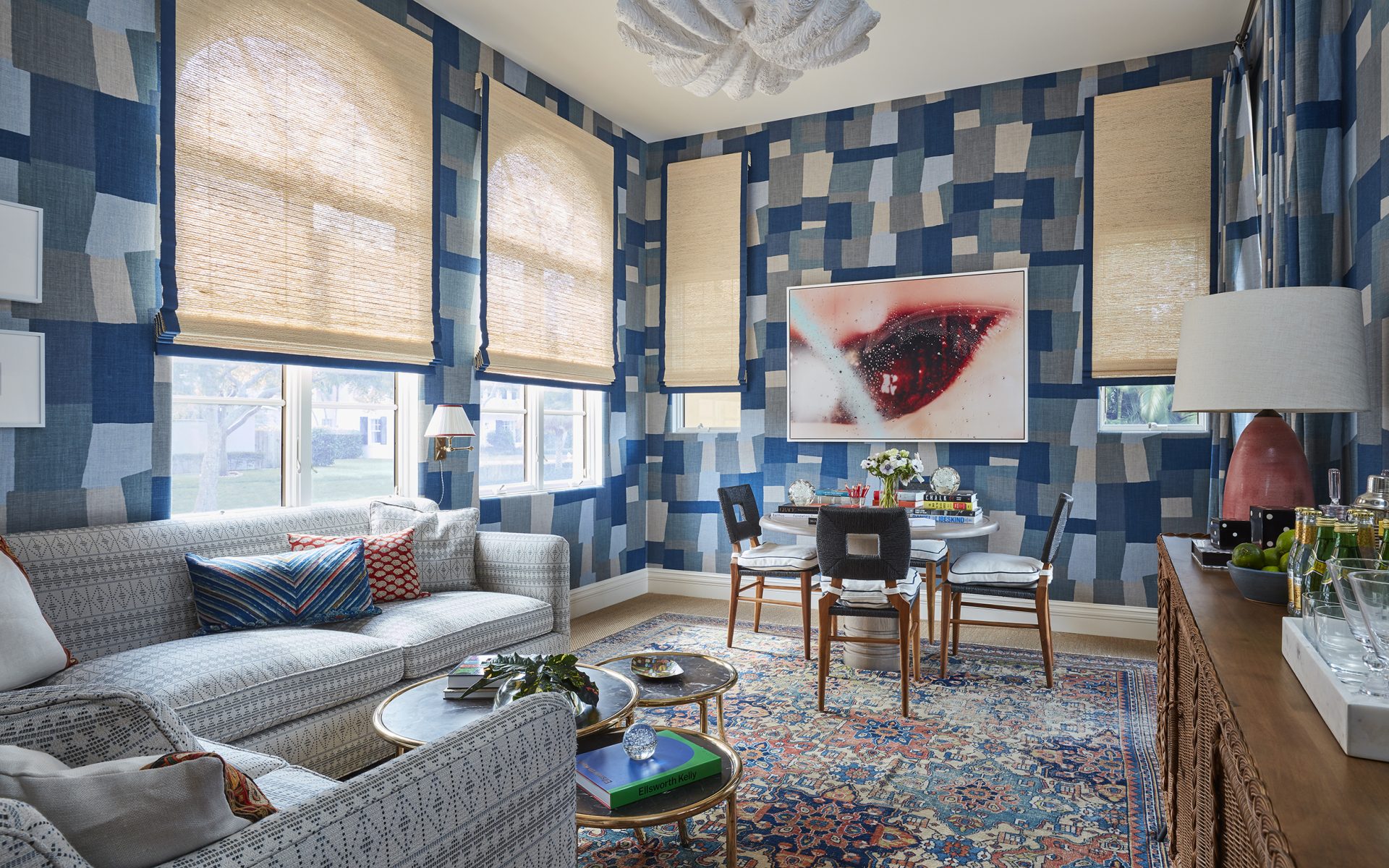 A sprawling house sitting across from Palm Beach’s intracoastal waterway has recently been taken over by nearly two dozen of the nation’s top designers. Each has put their own touch on a different corner of the residence as part of the second annual Kips Bay Decorator Show House Palm Beach, an offshoot of the renowned New York edition.

In the lead-up to the opening on Saturday, January 26, Galerie tapped interior designer and textile guru Peter Dunham to take us through the process of setting up his space. His bold room in the house is sure to be a highlight of this year’s iteration. Read on to see what it took to create his remarkable art-filled space. Dunham’s team did a walk-through of the space in mid-October. The room had been used as a bedroom, but, having done bedrooms in showhouses previously, Dunham had something else in mind. He wanted to create a screen-free retreat where a family could come to play games, read books, or relax without electronics.

With his idea in place, Dunham and his team started sketching out the room. He knew he wanted a corner sofa to sit on one side of the room and, on the other side, a table that would be perfect for playing board games. An early sketch of the room. Photo: Peter Dunham

Once the layout was set, Dunham began to search for the right mix of textiles. For the upholstered walls, he settled on a blue-and-gray print called Collage from his line, Peter Dunham Textiles, which would become a memorable signature aspect of the room. A rendering of the room’s design set against textiles the designer chose for the space. Photo: Peter Dunham

Pulling It All Together

Dunham is based in Los Angeles and most of the elements of the room came together on the West Coast. All of the upholstery, from the sofas to the sconces, was done in California. It was then driven across the country to the house in Palm Beach. Midway through the process of upholstering the walls. Photo: Peter Dunham

Dunham and his team arrived in Palm Beach in early January to begin making over the room. First up, they applied the paper-backed fabric to the walls.

Dunham chose the bold-patterned textile to adorn the walls because it was reminiscent of Palm Beach itself, with the spectrum of blues from the water and the sky layering over one another. Most of the room came together in only a few days. The chandelier traveled all the way from Dunham’s L.A. shop, Hollywood at Home. The team choosing the art to hang. Photo: Peter Dunham

Dunham worked with Gavlak gallery, which has locations in Los Angeles and Palm Beach, to borrow art for the room. Among the pieces he chose are works by Marilyn Minter, Maynard Monrow, Lisa Anne Auerbach, David Haxton, Michael Manning, and Rob Wynne. A board designed to conceal a bathroom door was too small to fill the gap. Photo: Peter Dunham

A Bump in the Road

Not keen on also designing a bath in the limited time they had to pull the room together, Dunham’s team had a board upholstered in the same fabric as the walls, intending to use it to cover the bathroom door. There was one slight issue, though. The measurements were off and the board didn’t actually fill up the space. They ended up using a box to prop the board up to the right height and the corner sectional was placed strategically in front, covering up any telltale signs. The room opens up onto a patio and, at the last minute, Dunham decided that the outdoor space needed some foliage. Photo: Peter Dunham

At the last minute, Dunham realized that the patio off the room needed one more thing—an oversize tree. He took a quick trip to a local nursery and found one that perfectly filled out the space. After months of preparation and planning, the room was finally finished and ready for visitors. Art loaned from Gavlak sits over the sectional, which is covered in an indoor-outdoor performance fabric from Dunham’s line. Photo: Brantley Photography A wicker credenza from Hollywood at Home serves as chic bar. The Waterfall woven shades with a custom blue linen trim is by the Shade Store. Photo: Brantley Photography A striking work by Marilyn Minter hangs over the table. Photo: Brantley Photography