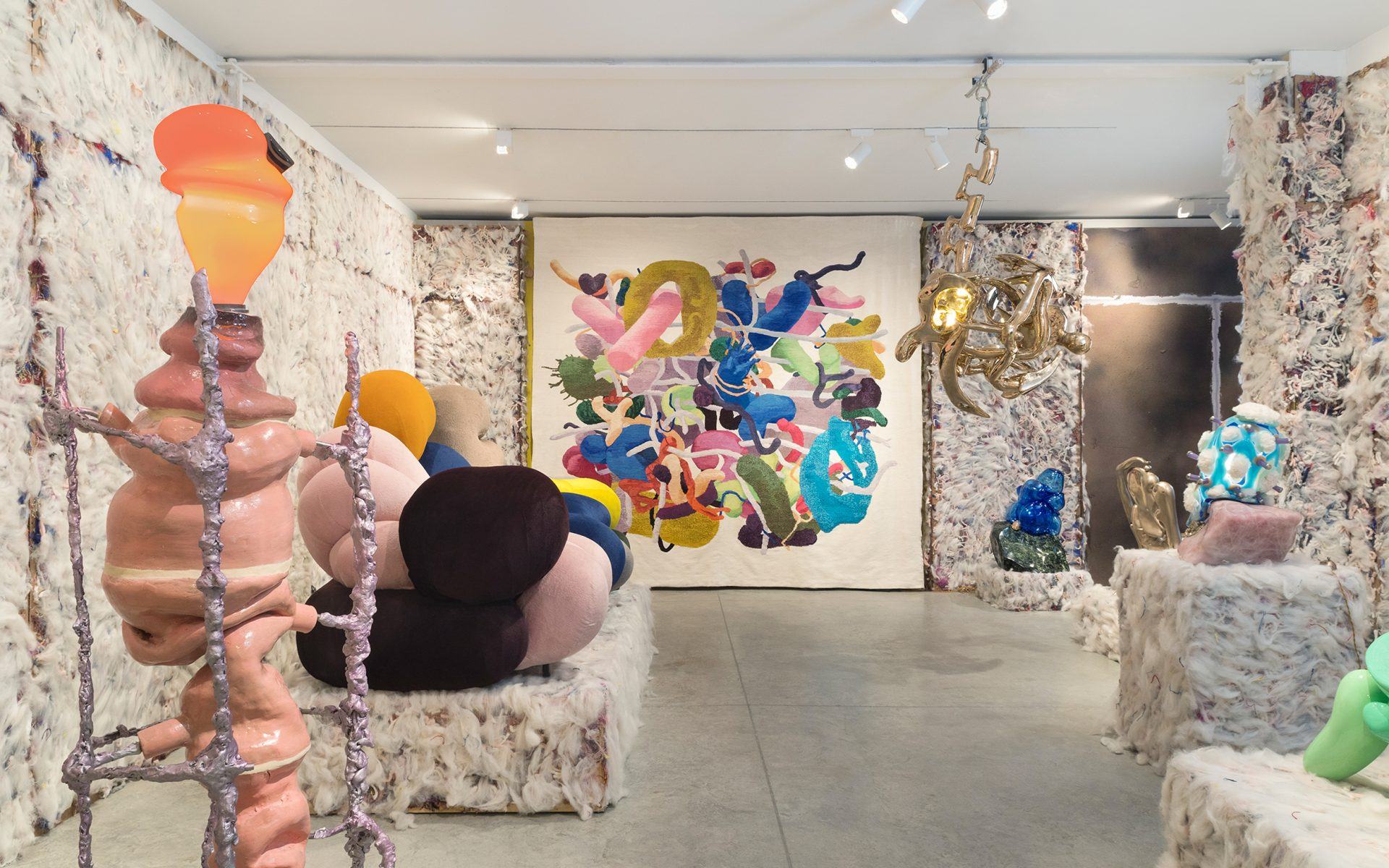 Misha Kahn’s latest exhibition at Friedman Benda is so multifarious that even the walls have gotten a makeover. “I wanted them to feel blank, but blank in my own way,” says the Brooklyn-based designer, known for his wildly imaginative furnishings in adventurous hues. “So instead of it just being a white wall, I used a million colors to make a white wall.” Indeed, for “Soft Bodies, Hard Spaces,” which is on view through April 4, Kahn has covered half of the Chelsea gallery with oodles of yarn scraps that range from scarlet to periwinkle, all overlaid with gauzy tufts of white wool. The result reads like static, creating a visually soft backdrop that perfectly complements the Seussian treasures on view. Among those treasures is a monumental mohair tapestry titled A Loose Understanding of the Space-Time Continuum, the frenetic design of which was created using virtual-reality technology that was then woven on a handloom. This man-meets-machine process is emblematic of the show at large, which strikes a poetic balance between computer automation and human skill. “I was trying to have this digital and hand-done interplay between all of the objects,” Kahn tells Galerie. “So whether it’s just aesthetic or actually in their fabrication, the pieces are optimistic about humans and machines being good collaborators.”

Striking that balance has been crucial for Kahn, who graduated with a degree in furniture design from the Rhode Island School of Design in 2011 and quickly made a name for himself producing avant-garde furnishings that could easily be categorized as art. “It’s been so fun with this show to bounce back and forth between working digitally and with my hands,” says Kahn, who recently moved his practice to a cavernous studio in Sunset Park. “We try a lot of different things and go down whichever way feels like the path of least resistance.”

Another key theme is Kahn’s egalitarian approach to materials, with foam-core seating upholstered in cashmere, skeleton-like chandeliers rendered in bronze, and a side table that combines aluminum, stainless steel, and ceramic. Imported stones like unakite and tigereye also appear in a handful of works, as do candy-colored glass elements, which Kahn created earlier this year during a two-week stint at the Corning Museum of Glass in upstate New York. “A lot of things in the show go on a collage voyage, so I wanted the materials to be empathetic with each other,” he says. “Everything is cradled together in a way that is soft and gentle, even if it’s made out of aluminum and glass.” The piece that appears most destined for social media stardom is a “liquor locker” dubbed Lone Pickle in Empty Fridge. Resembling a spaceship, the striking cabinet is comprised of a shiny turquoise egg mounted upright on a stainless-steel base dotted with blue-glass amoebas. The mystical orb—made of resin and finished in automotive paint—then opens to reveal a glossy blood-orange interior. “The egg part was done the same way as the mirrors I’ve made in the past,” says Kahn, referencing a technique in which a mold is created from a spinning inflatable bag. “I’ve mostly used that in a decorative way, but I think it’s at the point now where we can do something substantial and structural with it. I wanted to plant that seed for later.”