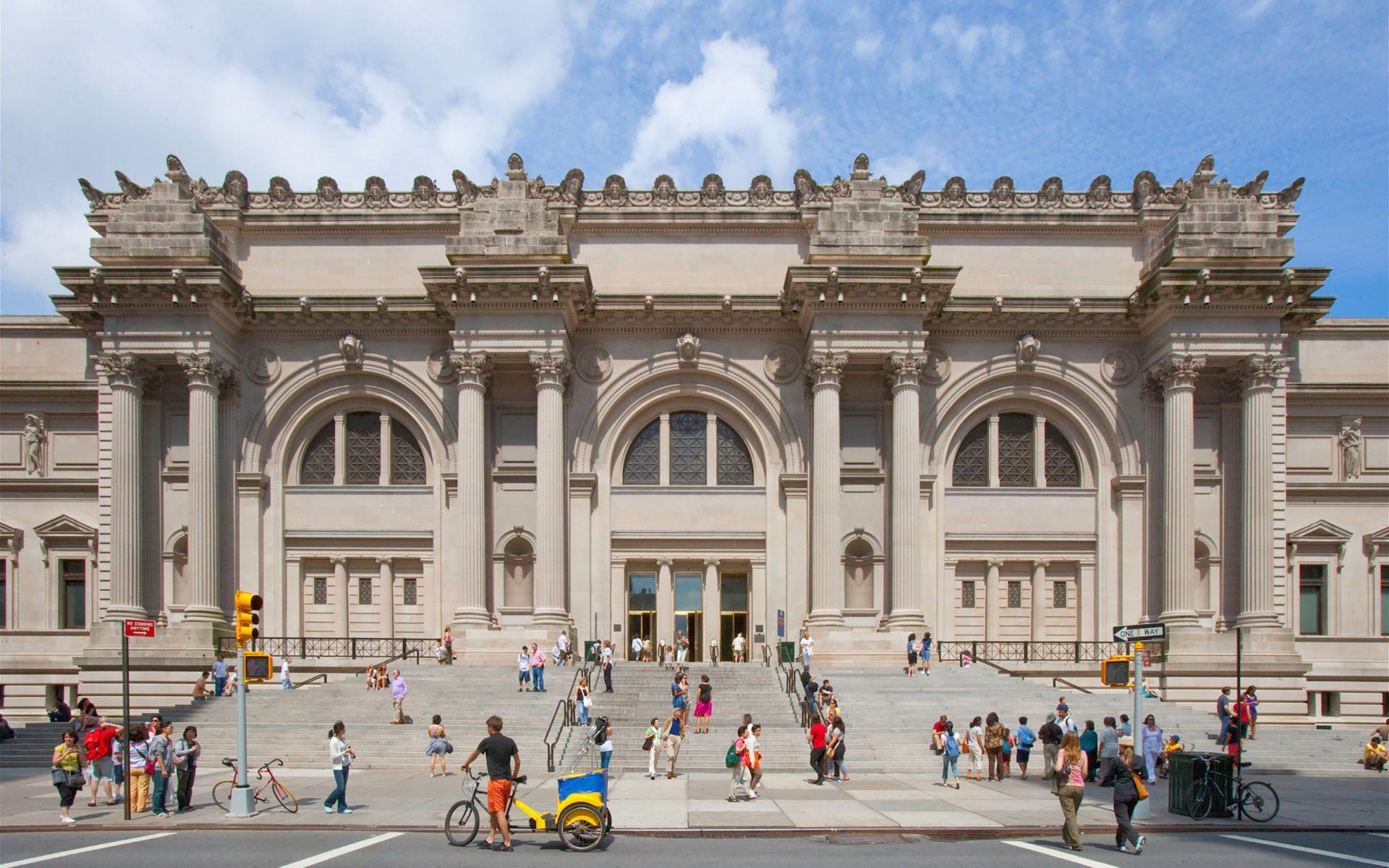 In honor of the New York museum’s milestone anniversary, Galerie looks back on some of the storied institution’s most transformational moments

“The Met is one of the few places where one can explore one’s own culture, and discover what might also be familiar or resonant in another culture,” the Metropolitan Museum of Art’s director Max Hollein tells Galerie. With The Met now likely shuttered through June and the world at large feeling COVID-19’s impact on culture, his message is a poignant one.

This year marks the storied institution’s 150th anniversary, and the year-long series of events and exhibitions, such as “Making the Met 1870–2020,” are temporarily paused. The showcase was to juxtapose over 250 artworks that reflects the museum’s encyclopedic archives, “from visitor favorites to fragile treasures that can only be placed on view from time to time.” Along with tracing the fascinating story of the museum’s history, the plans have been an opportunity to seek out new acquisitions to fill gaps in the collection. “Museums are becoming increasingly responsible for leading important cross-cultural conversations about history, representation, and expression,” Hollein says. “We are thinking deeply about our responsibility as stewards of this exceptional collection and are committing ourselves to raising up underrepresented perspectives and to illuminating the interconnectedness of our shared cultural history.”

Since the museum’s founding in 1870 by a group of New York businessmen and artists who wanted to bring art and art education to the American people, The Met has grown into an institution with over two million works across 17 curatorial departments. Below, we celebrate some milestones.

This iconic 1881 painting by Frank Waller depicts the museum’s second home, the Douglas Mansion at 128 West 14th Street, which it occupied from 1873 to 1879. The rapidly expanding museum had outgrown its original location in the Dodworth Building at 681 Fifth Avenue and was in need of additional gallery space. This second home was to be its location for the next six years, until 1880, when it settled into the current location in Central Park. The Douglas Mansion later became a training school for the Salvation Army before it was destroyed by a fire in 1918. A 1910 photograph of visitors viewing George Washington Crossing the Delaware (1851) by Emanuel Leutze. Photo: Courtesy of the Metropolitan Museum of Art, New York

2. The Beginning of a Collection

Emanuel Leutze’s depiction of George Washington’s attack on the Hessians at Trenton in 1776 is one of the most famous works of art ever made. Twenty feet long and 14 feet high, the monumental painting speaks to the heroic mythicism that is so often ascribed to America’s founding. It was gifted to the museum by Scottish financier John Stewart Kennedy in 1897 and it continues to draw crowds today. The magnificent Temple of Dendur dates to the first century B.C., during the Roman occupation of Egypt in the reign of Emperor Augustus. Originally situated on the west bank of the Nile River about 50 miles south of Aswan, it was gifted to the U.S. by the Egyptian government in 1965 as thanks for its help in moving important ancient monuments out of the path of an impending flood.

A number of different American institutions made the case as to why the temple should come to theirs, but The Met’s argument was the strongest; it discussed setting the temple inside a dedicated building and it would supplement one of the greatest collections of Egyptian antiquities in the world.  On April 28, 1967, President Lyndon B. Johnson awarded the temple to the museum. Disassembled, numbered, and shipped in 660 crates, the attraction took nearly ten years to make its debut to the public. The Costume Institute’s annual Met Gala is one of the most hotly anticipated events on the cultural calendar, with the fashion industry pulling out all the stops. But this wasn’t always the case. When the gala was first introduced to New York’s society in 1948 by fashion publicist, Eleanor Lambert, tickets cost $50 and the soirée was an intimate evening at the Waldorf Astoria designed to raise money for the newly launched Costume Institute.

It wasn’t until decades later that the event would begin to appear more as it today, when fashion editor Diana Vreeland came on board as a consultant. During her tenure, the guest list shifted from Manhattan’s high society to include such Hollywood celebrities Andy Warhol, Diana Ross and Cher. It was also under Vreeland that the fête would become themed and over the years, these included Diaghilev and the Ballet Russe, Royal India, and Yves Saint Laurent. Today, the museum’s Costume Institute boasts more than 33,000 articles of clothing and accessories from across five continents and spanning seven centuries. Imran Qureshi (b. 1972, Hyderabad, Pakistan). Installation view of And How Many Rains Must Fall Before the Stains Are Washed Clean (2013) for The Roof Garden Commission. Photo: The Metropolitan Museum of Art/Hyla Skopitz

While the Iris and B. Gerald Cantor Roof Garden has offered a unique outdoor exhibition space since its opening in 1987, it was in 2013 that a dynamic new series of site-specific commissions was launched with an installation by Pakistani artist Imran Qureshi. And How Many Rains Must Fall Before the Stains Are Washed Clean saw The Met’s 7,500-square-foot roof terrace splattered with bloodred motifs commonly found in Indian and Persian miniature paintings. In an interview in a booklet that accompanied the exhibition, Qureshi said of the public’s response: “It was amazing. People were crying—and, at first, I thought maybe I had done something wrong!”

Other notable examples from recent years include Cornelia Parker’s Transitional Object (PsychoBarn), which was inspired by paintings by Edward Hopper and the sinister mansion from Alfred Hitchcock’s 1960 film Psycho, and Adrián Villar Rojas’s Theater of Disappearance, which incorporated the three-dimensional replication of nearly 100 objects from The Met collection. 6. The Facade Gets a New Face

When the architect Richard Morris Hunt designed the Beaux-Arts facade of New York’s Metropolitan Museum of Art, there were plans for sculptures by the Viennese artist Karl Bitter to adorn it. Due to funding issues, however, those works were never installed. Fast forward to late 2019, and The Met unveiled its first-ever commission for the facade, a striking series of sculptures by the Kenyan-born, New York–based artist Wangechi Mutu. Titled “The NewOnes, will free Us,” the exhibition features four bronze works. The project was part of a focused effort by director Max Hollein to break down the barriers between historical periods and cultures. Installation view of the 18th Century Gallery, including this case of various luxury goods, in The Met’s New British Galleries. Photo: Richard Lee, February 2020. Courtesy of The Metropolitan Museum of Art

New York interior design and architecture firm Roman and Williams Buildings and Interiors oversaw the $22 million renovation of the museum’s British decorative arts and design galleries. Opened to the public on March 2, the new, 11,000-square-foot space is still devoted to British sculpture, design, and decorative arts between 1500 and 1900—from the Tudor period to the Victorian—but with a fresh perspective. The inaugural exhibition showcased approximately 700 objects in a dazzling, immersive setting. “It’s a very rich and complex story that we’re laying out here—one that celebrates the arts and the objects but also lays out in the open the complex histories, narratives, the multiple perspectives that we can have with these objects,” Hollein said at the press preview. “I hope that’s something we will do in a major way moving forward.”

A version of this article first appeared in print in our 2020 Spring issue under the headline “Milestone: The Met.” Subscribe to the magazine.