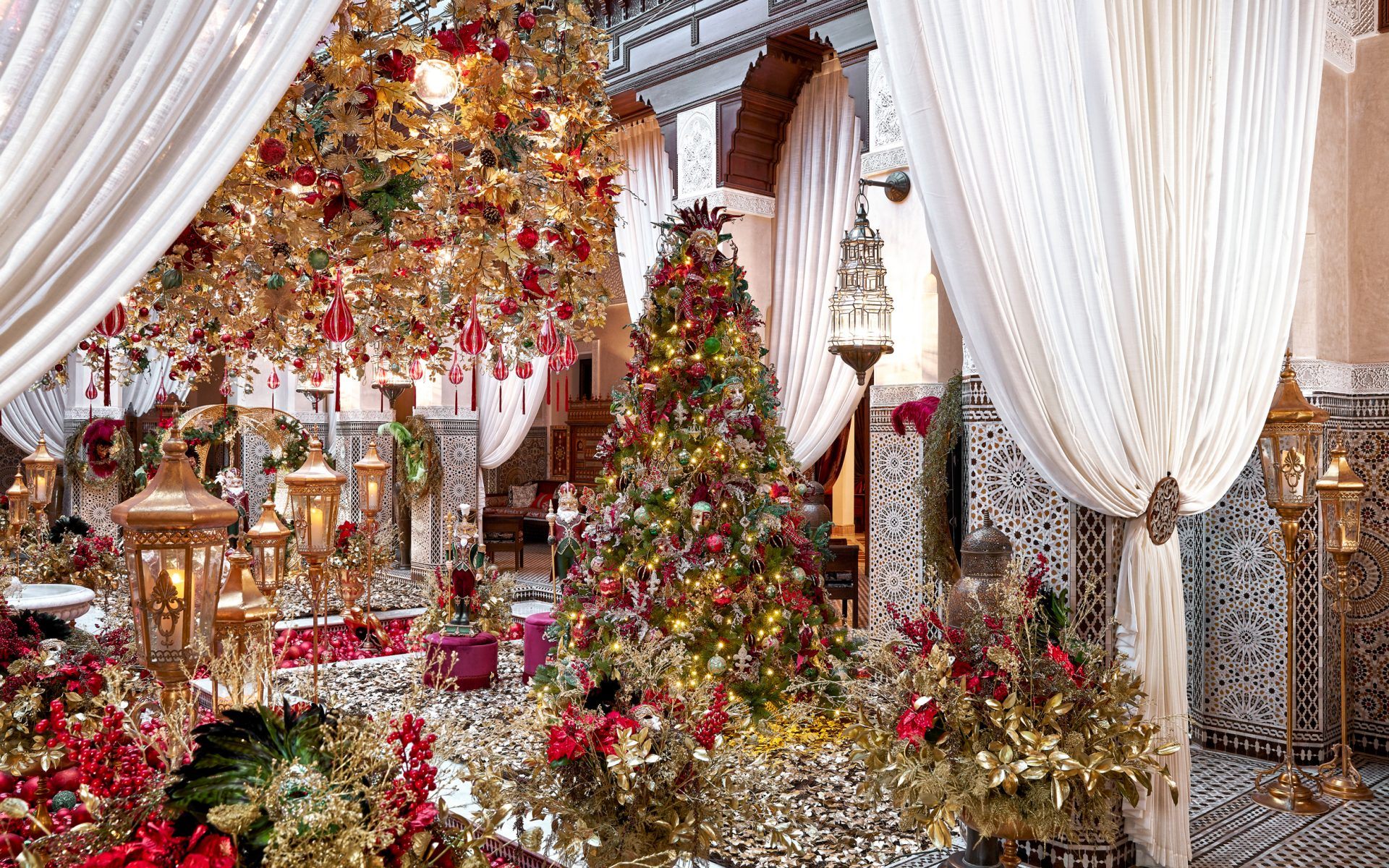 Why Marrakech Is the Perfect Christmas Destination Although Marrakech may not be the first place that jumps to mind as a destination for the holidays, the enchanting Moroccan city dazzles more than ever at the end of the year. With blissful weather (sunny enough for sitting by the pool during the day but requiring a jacket for dinner), there’s no better time to explore this design-inspiration mecca. The French have long known about the holiday wonders of the Red City, named for its ochre-colored town walls, flocking here to make merry and bright from Christmas Eve through New Year’s Day.

The best hotels go over the top to make sure that the Festive Season is celebrated in style, offering astounding decorations, spectacular entertainment, and sensational culinary delights. Here’s what a few of these exquisite Leading Hotels of the World properties have planned that make it worth it to book a last-minute flight. Royal Mansour, built by King Mohammed VI with no expense spared, is a lavish experience every day of the year. Designed as a medina within the medina, the eight-acre property is filled with examples of the artisanship that thrives in the country, including hand-carved cedar doors, zellige tile work, and mother-of-pearl inlay. Each of the 53 rooms is actually its own private riad with a unique design, but it’s the public spaces that truly come alive this time of year with elaborate decorations.

This year, the hotel looks to Venice for inspiration as a nod to the property’s new Italian restaurant, Sesamo, helmed by Michelin-starred chef Maximilano Alajmo. Glittering red and gold ornaments are accents along with masks and candlesticks. For New Year’s Eve, a lavish masquerade ball is planned along with commedia dell’arte performances. And when it’s time for a break from all the gaiety, the pristine white spa offers a heavenly retreat. Nearby, at the famed La Mamounia, which was renovated by designer Jacques Garcia, a louche elegance takes over for the holidays. The notoriously dark hallways are elegantly transformed with Christmas trees festooned with golden ribbons and ornaments. The miraculous gardens come decorated by nature with row after row of orange trees boasting bows heavy with gorgeous fruit.

But if you’re looking for real indulgences, the on-site patisserie by Pierre Hermé offers staggeringly delicious seasonal treats—an assortment of yule logs, an Advent calendar with a special treat for every day of December, and spiced brioche stollen. There’s also a true French Réveillon feast on Christmas Eve and a poolside Christmas brunch. Plus, there’s a slew of entertainment options, with both a band and DJs playing throughout the hotel’s restaurants and bars during the holiday week. Guests can ride camels with Santa on the grounds of the Fairmont Royal Palm Marrakech. Photo: Jacqueline Terrebonne

Just 15 minutes outside of the city, the Fairmont Royal Palm Marrakech offers a holiday destination close enough to the medina for sightseeing excursions but with majestic views of the snowcapped Atlas Mountains. The larger-than-life celebration here is set on a staggering 570-acre property with an unbelievable 21,000-square-foot pool. The Christmas tree is also of a notable scale, perfectly filling the dramatic architectural entrance of the hotel.

Putting its impressive expanse to good use, the hotel maintains a farm where much of the produce for the restaurants is harvested, plus it uses the olives from the trees around the property to make its own exceptional olive oil. The hotel’s grounds are actually situated on a centuries-old olive grove, and many of the trees enliven the 18-hole, Cabell Robinson–designed golf course. Christmas brunch here is especially lively and includes a visit from Santa on camelback along with a menagerie of animals, while New Year’s festivities are quite the show with spectacular fireworks set against the desert sky as well as hot-air balloon rides the next day to kick off the new year.

Of course, if there isn’t time to book a trip or your holiday calendar is already full, late February is also an ideal time to visit due to the 1-54 Contemporary African Art Fair, which takes over Marrakech from February 20 to 23.