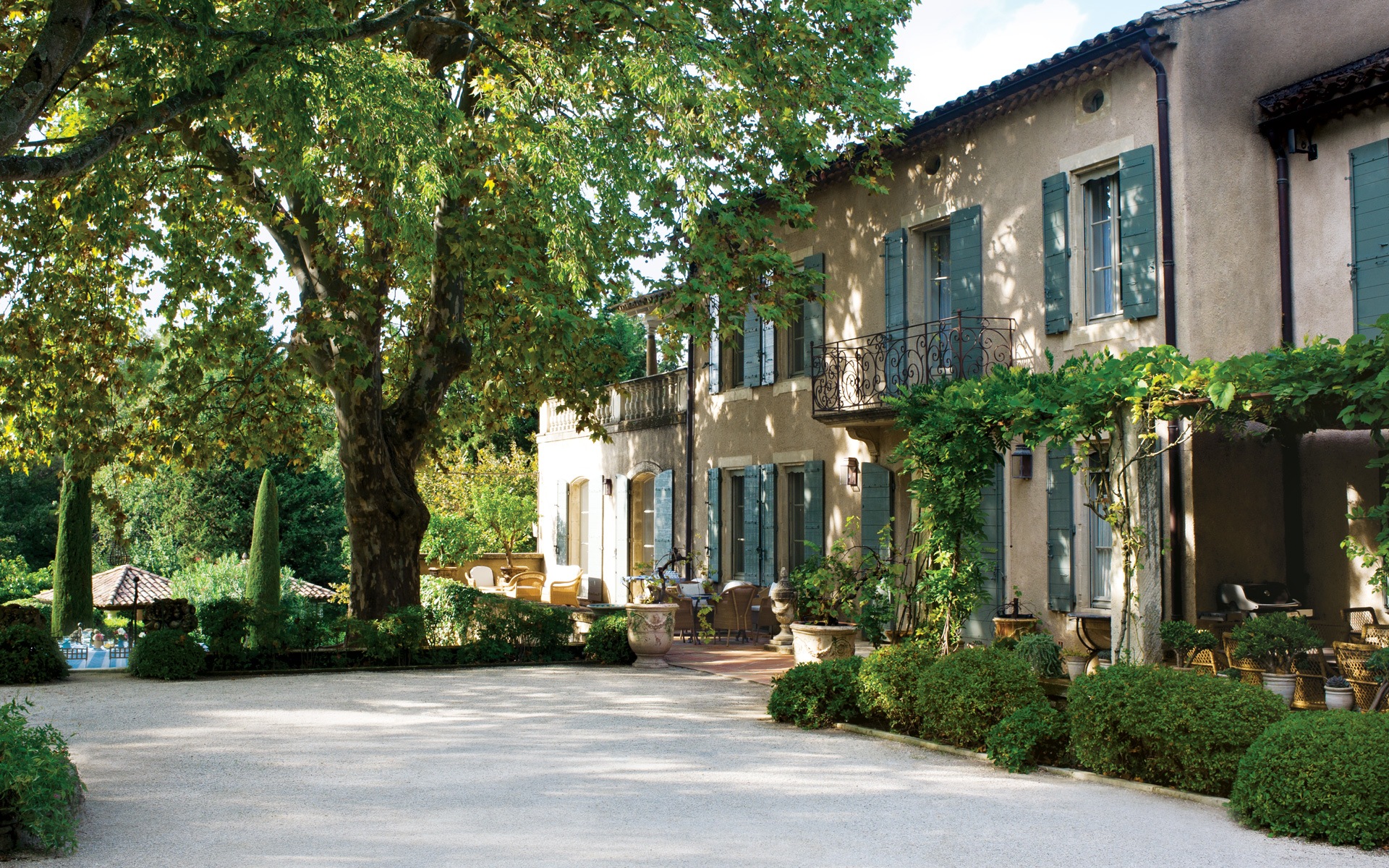 A farmhouse in the French countryside proves to be the perfect backdrop for their art collection curated from his roster of talents, including Miquel Barceló, Ena Swansea, and Gavin Turk

Five years ago, London contemporary art dealer Ben Brown and his wife, Louisa Guinness, a collector and gallerist herself specializing in artists’ jewelry, decided it would be fun to look for a house in Provence. They had several friends with homes near Arles, Saint-Rémy-de-Provence, and Avignon, a region famous for its seductive light, which attracted artists like Vincent van Gogh, Paul Gauguin, and Pablo Picasso, as well as for its standout cuisine and culture. “You come to this area because you either want good food, good wine, or good art,” says Guinness. “We happen to like all three.” 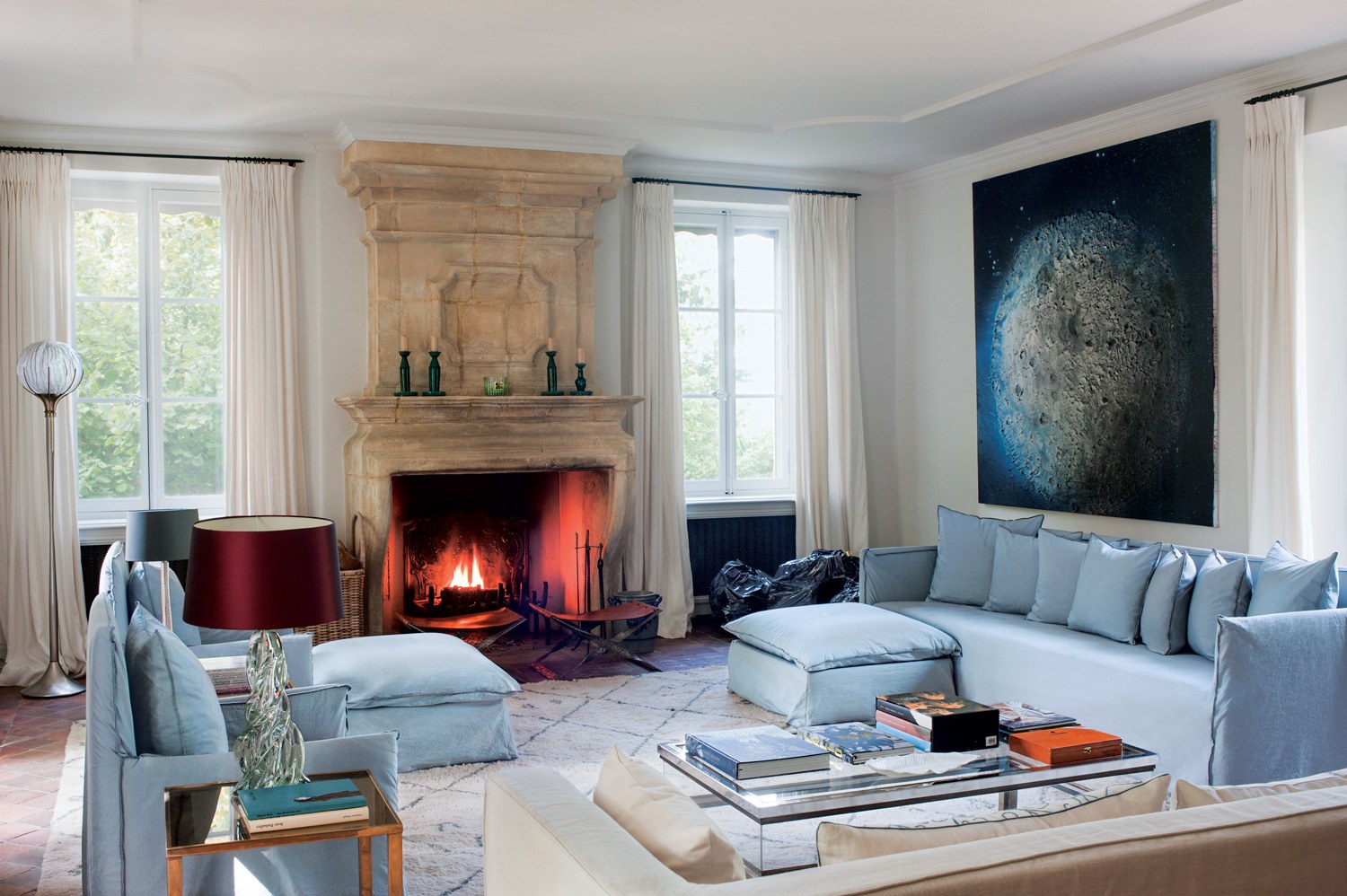 In the living room, which retains its original fireplace, Guinness grouped a cream-colored Liaigre sofa with a bluish gray sofa, armchairs, and an ottoman by Gervasoni; the sculpture in the corner is by Gavin Turk, the painting is by Miquel Barceló, and the table lamps are by Vaughan. Photo: Tim Beddow

The couple thought their search would take years, but in fact, it took only a few days. Love is like that. They fell for the second property they saw, a Provençal farmhouse known as a mas, just a ten-minute drive from Saint-Rémy.

“It has really good bones,” Guinness says of the structure, which sits on 15 acres surrounded by old stone walls, with mature cypress and plane trees, cobblestone paths, a fountain, a rose garden, a vegetable garden, and an olive grove the couple uses to make their own olive oil. “There’s something incredibly magical about the house,” says Brown. 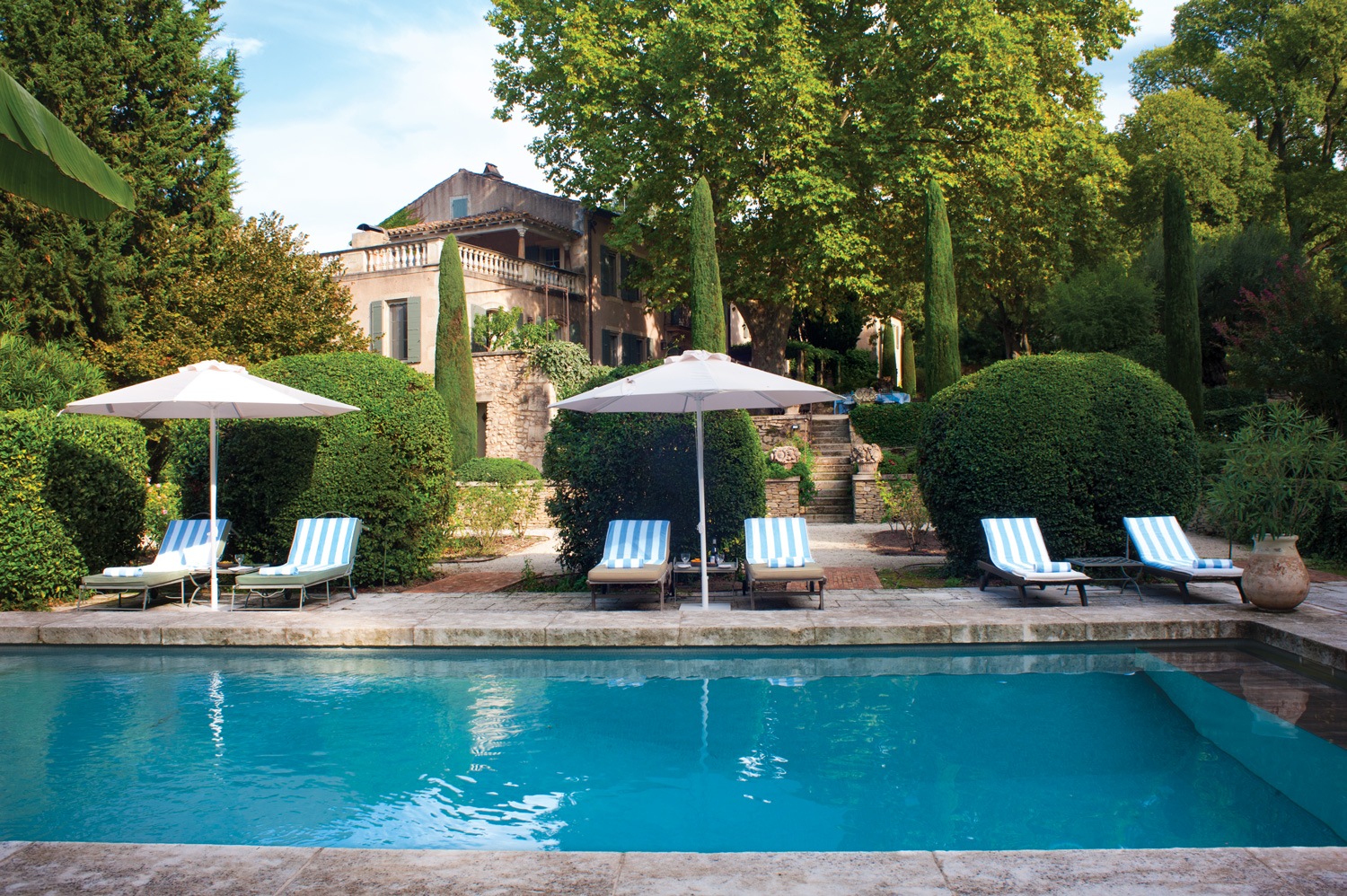 The mas was first restored in 2002 by the esteemed late Provençal architect Bruno Lafourcade, whose wife, Dominique, was the mastermind behind the majestic gardens. The home’s well-proportioned rooms, offering plenty of wall space for Guinness and Brown to hang their art, had been smartly decorated and maintained by a fashion-designing Belgian couple. This was a big plus for Guinness, who oversaw the interiors. “We had just done up our places in London and the country,” she recounts. “I didn’t want another big project.” 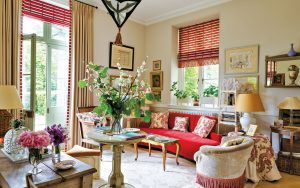 There was one hitch: The house had only a single large bedroom for the couple and their three children; the rest of the upper level was occupied by a laundry room and a fashion studio. When Brown first saw the studio space, with its soaring ceilings, he imagined an amazing gallery for displaying art. But that would have required the family of five to sleep in the same bedroom and reason prevailed. The couple hired Alexandre Lafourcade, who had taken over the family firm after his father’s death, to divide the studio and laundry room into four additional bedrooms and baths. 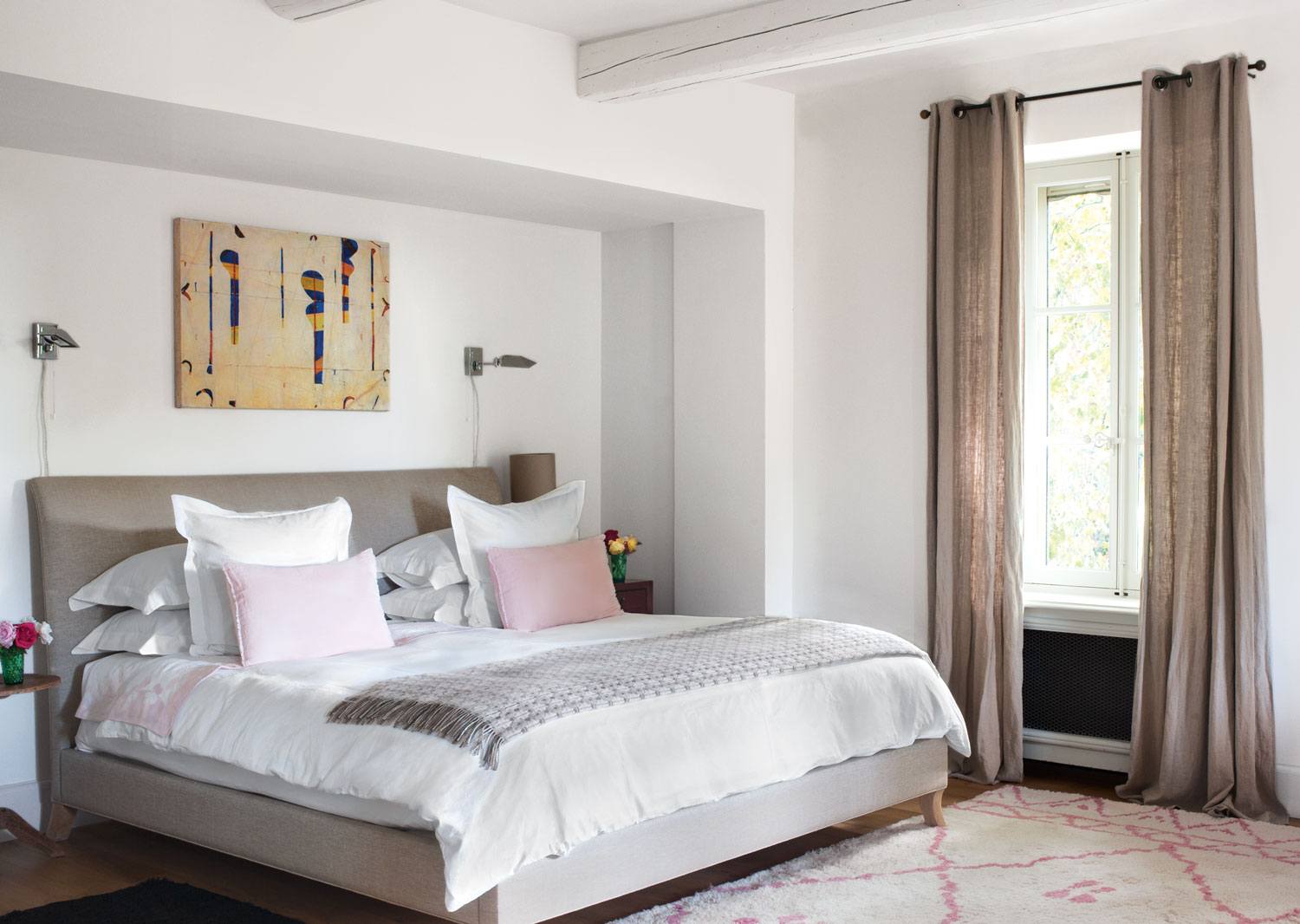 A dynamic canvas by American abstractionist Caio Fonseca animates the primary bedroom. “This is one of my favorite small Fonseca paintings,” says Ben Brown. “It’s so delicious and contains all of the musical forms and harmonious tones that one associates with his work. Photo: Tim Beddow

When it came to selecting the art, Guinness suggested focusing on works by young, less-established artists. “Yeah, that would be a good idea,” she recalls her husband saying. “And then he completely ignored me and filled the house with works by his favorite artists.” Most of them are represented by or have been exhibited at his Mayfair gallery, Ben Brown Fine Arts, including Miquel Barceló, Ena Swansea, Gavin Turk, Thomas Struth, Les Lalanne, and Alighiero Boetti.

In the dining room, Brown commissioned a mural from Swansea, whose husband works for Maja Hoffmann’s Luma Foundation in nearby Arles. The artist painted the mural in her studio there, even including in the wintry landscape an image of Brown and his daughter, Tatiana, walking the family cocker spaniel, Oakey. 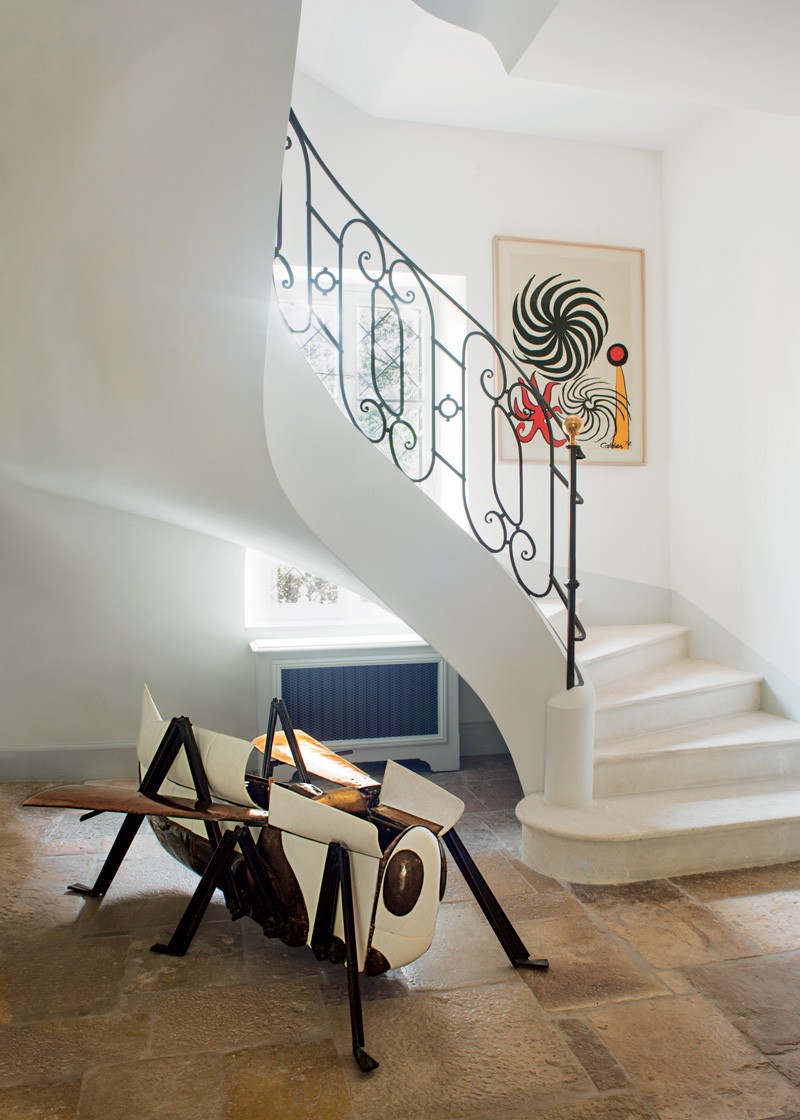 An Alexander Calder work on paper and a bar in the form of a grasshopper by François-Xavier Lalanne enliven the main staircase. Photo: Tim Beddow

Brown brought in some of his best pieces by Barceló, a Majorcan artist who has a strong affinity for the area and had a big show in Avignon 11 years ago that Brown loved. Claude and François-Xavier Lalanne, the late French couple Brown first met in the early 1990s, when they made a bed for his mother, are represented by Claude’s sculpture of a cabbage with chicken feet and a grasshopper-shaped bar by François-Xavier—both at the foot of the staircase. (The bar is one of two made, the other residing in the collection of the Queen of England, a present from French president Georges Pompidou.) 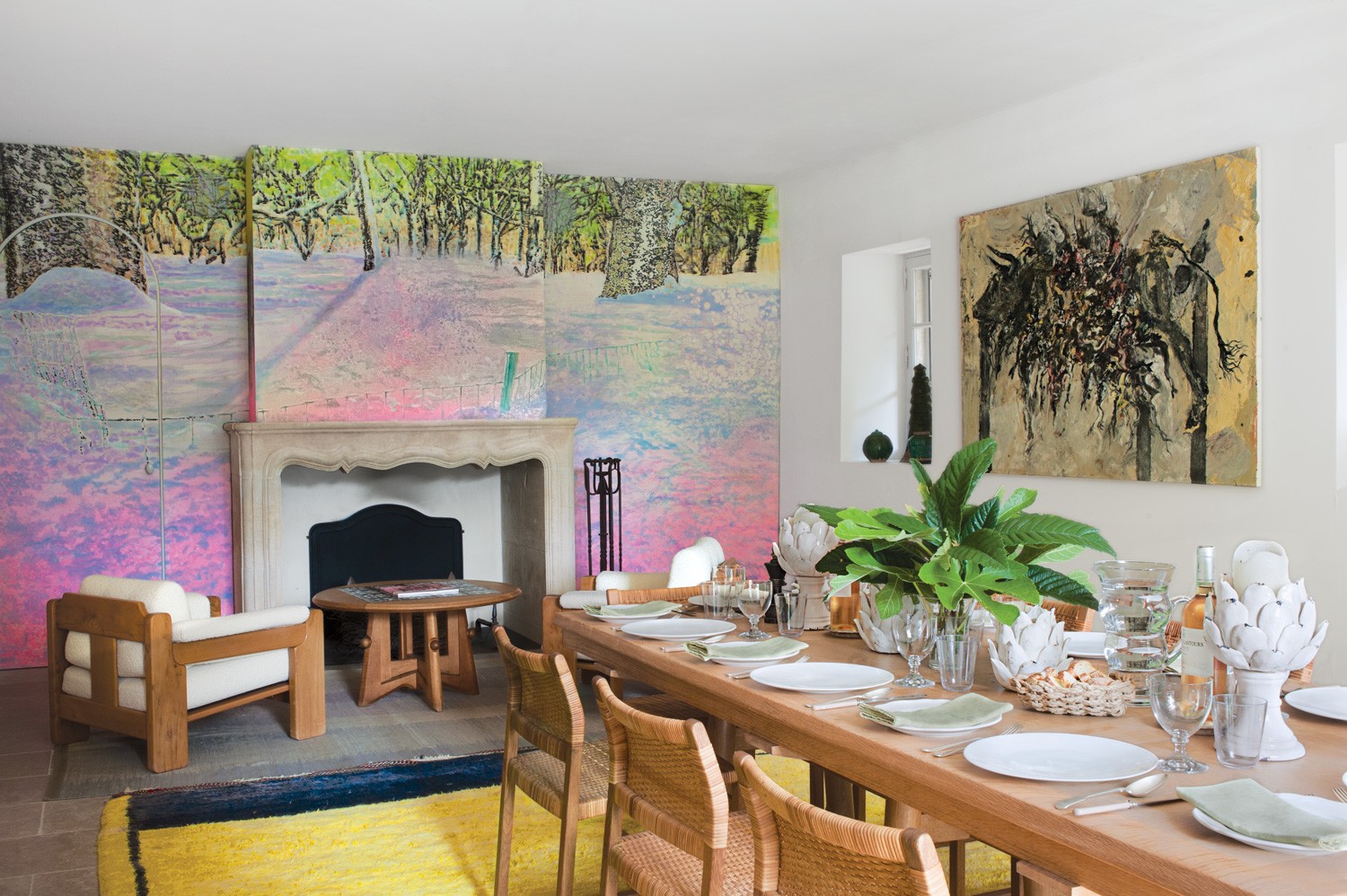 Brown commissioned one of his gallery artists, Ena Swansea, who has a studio in nearby Arles, to paint a mural around the fireplace in the dining room, where vintage chairs by Børge Mogensen surround a dining table by Guillerme et Chambron, who also designed the 1970s chairs and table next to the fireplace. Photo: Tim Beddow

The house is imbued with an eclectic, sophisticated spirit that radiates from diverse acquisitions assembled over the years. A Ron Arad chaise longue in the drawing room was a wedding present from Brown’s parents. An Alexander Calder work on paper that hangs above the staircase, originally a gift from Brown to his parents, was returned to him upon the death of his father, an architect who designed the sofa in the hallway. 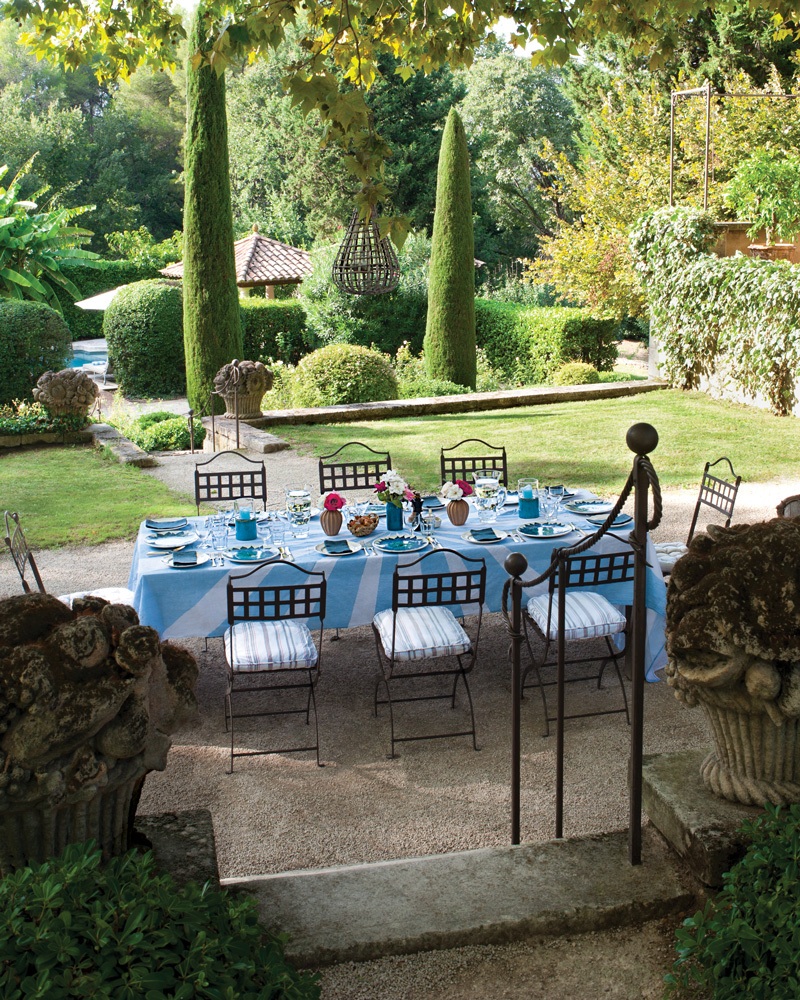 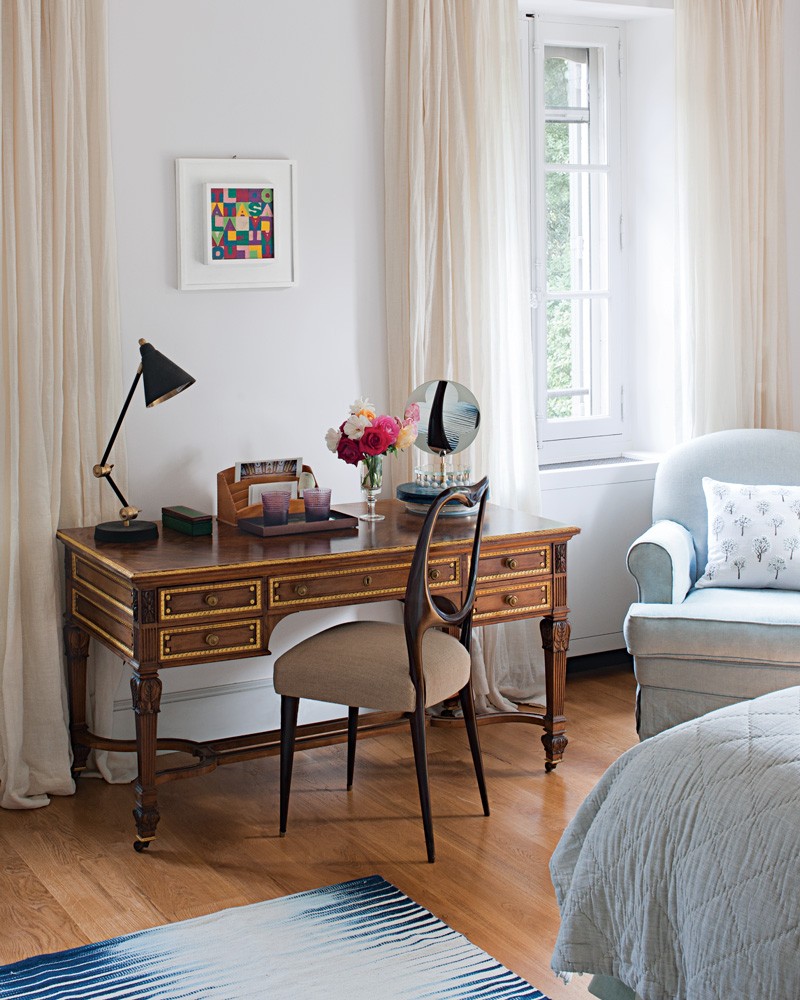 Surmounting a writing desk in the guest room is a small grid by Alighiero Boetti, a leading figure in the Arte Povera movement. “It’s a perfect gem of a Boetti, who was one of the greatest postwar Italian artists,” says Brown. Although Boetti utilized a variety of mediums, he became famous for his mosaiclike embroideries crafted by Afghan weavers. Many of those multicolored works, like the one shown, consist of individual letters that the viewer must decipher and arrange into words. Photo: Tim Beddow

To fill out the furnishings Guinness—who understatedly says, “I love finding little things”—scoured local markets in France, country auctions in England, and small London design boutiques. “It gave me an excuse to shop,” she says. “I’m slightly obsessed with plates, glasses, tablecloths, and baskets.”

The charismatic couple loves to entertain, but Guinness and Brown also relish relaxing at home, enjoying informal lunches and dinners with family and friends on the terrace. Shaded by a leafy plane tree, surrounded by the idyllic gardens, it’s a magical spot to savor the long, lazy days of the Provençal summer.

A version of this article first appeared in print in our 2021 Spring Issue under the headline “Idyll Pursuits.” Subscribe to the magazine.

How Gallerists Louisa Guinness and Ben Brown Live With Their Art