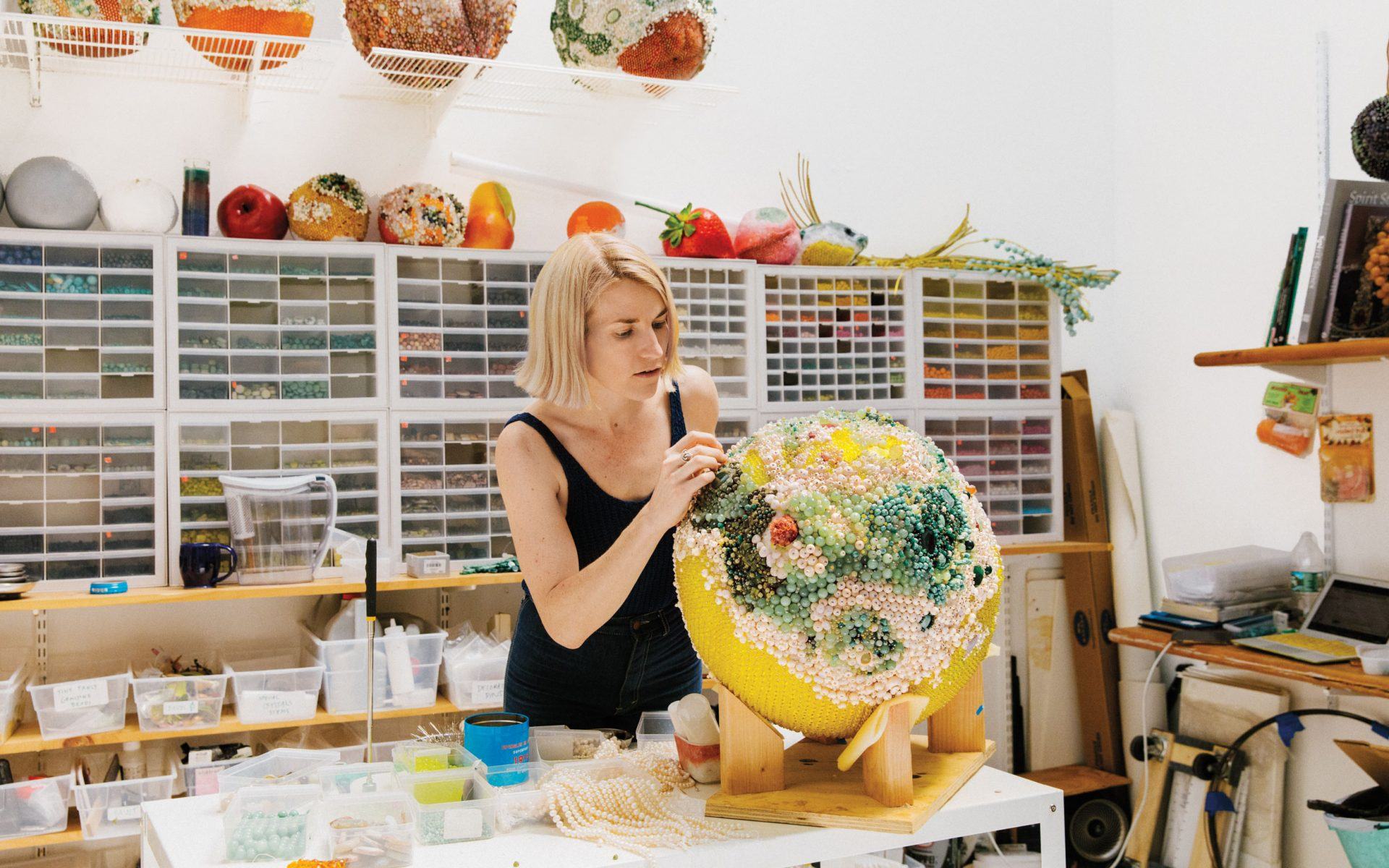 Moldy, decaying fruit is transformed into something of opulent beauty in the hands of Los Angeles–born Kathleen Ryan, who now resides in New York. At the most recent Art Basel in Miami Beach, viewers were stopped in their tracks at Josh Lilley’s booth, where the artist conceived a monumental trailer containing a dazzling, oversize pile of cherries, lemons, oranges, and grapes—each piece intricately crafted with tens of thousands of beads and gemstones and found objects sourced from junk shops.

In a twist, to create the areas of rot, Ryan utilizes valuable natural gemstones such as agate, lapis lazuli, and pearls, and the more common manufactured glass and plastic beads on the fresh parts. The multilayered works reference themes of waste, consumption, power, and sexuality. “I’m interested in using the psychological weight of the actual material,” says Ryan. This whimsical play of contrasting elements and unexpected pairings—the beautiful and grotesque, old and new—runs through most of her work. Inheriting her mother’s love for finding great vintage and antiques, Ryan is as equally inspired by the decorative arts, ancient Egyptian sculptures, and Dutch still life paintings she discovers in museums as she is by the warehouse-size suburban junk stores in Jersey City, where she recently moved into a 3,000-square-foot studio that she shares with her boyfriend, artist Gavin Kenyon. Her current solo exhibition at François Ghebaly gallery, timed with Frieze L.A., features two of her most ambitious works yet: an encrusted overripe grape cluster with stems crafted from copper plumbing pipes and a colossal watermelon that seems to have been dropped from the ceiling, with large pink beaded chunks splatted across the floor. The rind is fashioned from a beat-up Airstream trailer that Ryan purchased on Craigslist. “I like how objects bring meaning and carry a history,” she says. “The Airstream is an idealized symbol of Americana—of leisure and freedom. And here, it’s a broken, rotten watermelon.”