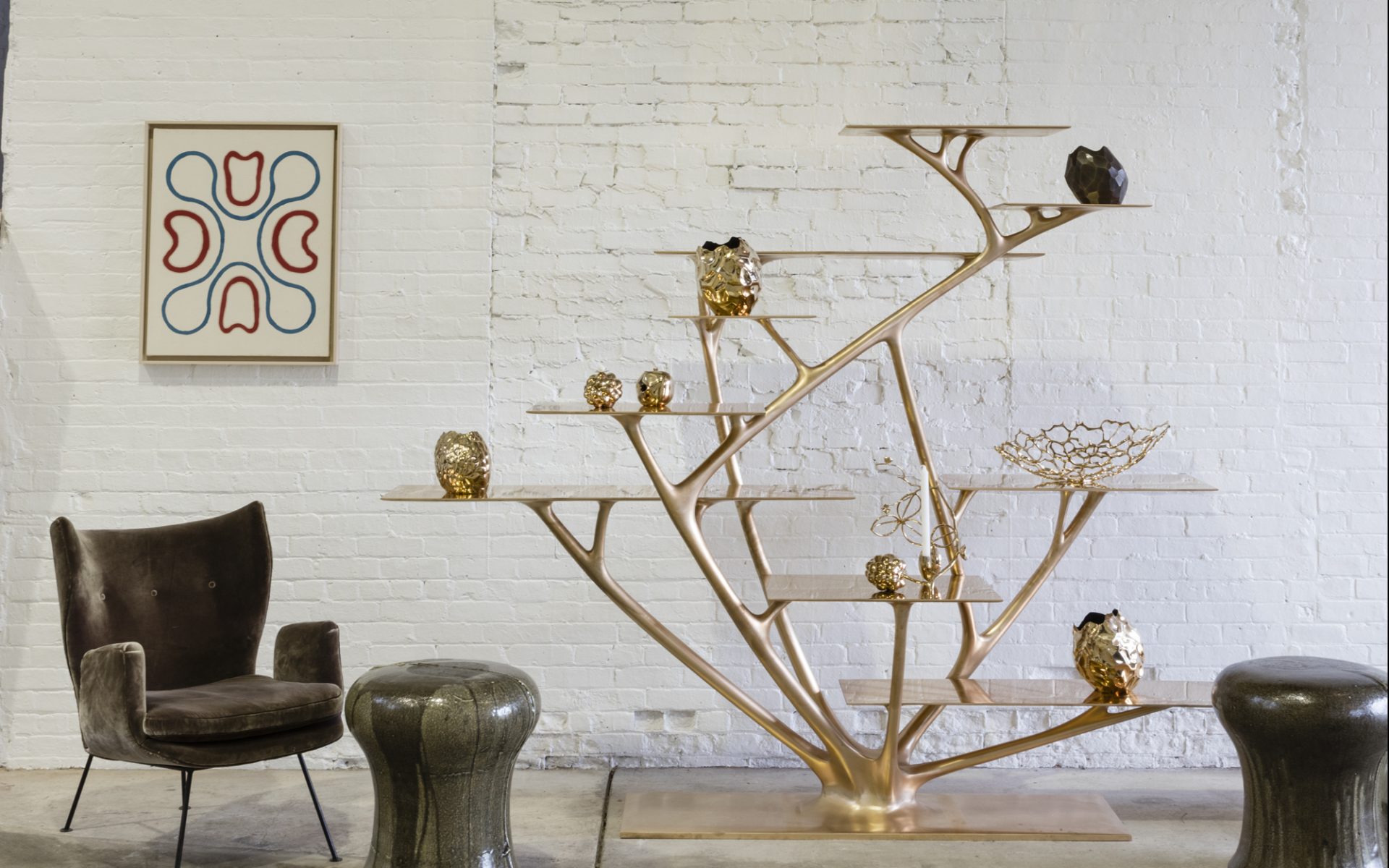 The Collective by Jeff Lincoln in East Hampton, New York.

It’s safe to say that most people shopping for high-end designer furniture or up-to-the-minute art—even more so if it was created decades ago—are pretty blasé. Been there, seen that, know all about it, is usually their mantra. But if this group should happen to drop by the Collective by Jeff Lincoln on their travels out to Eastern Long Island, one could safely say that they are in for a jaw-dropping experience. First the space itself—a 19th-century former power station that Lincoln, the New York– and Southampton-based interior designer, has transformed into an awesome—for once, the overused word is right on target—space that is both sophisticated and industrial, for a group of paintings and furniture that is outright sensational. Lincoln proudly welcomes visitors to his collective in Southampton, New York. The 1962 Petono, on the right, is by Paul Feeley. The other pieces are by John Wesley, and include the 1974 Tour de France, and the 1984 Night Titanic. The sofa and bolstered chairs are midcentury Brazilian.

“The space was inspiring,” explained Lincoln. “It’s a gallery that happens to be in the Hamptons, not a Hamptons gallery,” he added. “The idea was to show how important art and important design can work together,” he said. “Are they all big ticket items?” is the question that pops up immediately. The response is just as quick. “You bet; everything is!” said Lincoln. Included are paintings by the Los Angeles–born and still-painting-away American Pop artist John Wesley and the Iowa-born painter Paul Feeley, who taught at Bennington College, in Bennington, Vermont, and was very influential in the 1950s and early ’60s. The Collective by Jeff Lincoln has some of their best work on display. “I feel that these are artists who are undervalued, and whose work needs to be seen in a different context,” Lincoln added. Joris Laarman created the bronze etagere and all the objects displayed on it. The small painting is a 1963 work by the American artist Paul Feeley, the ceramic stools are by the south Korean artist Lee Hun-Chung, and the chair is a 1950s design by the Brazilian designer Martin Eisler.

Contemporary pieces such as the multilevel bronze étagère by the Dutch designer Joris Laarman, a poetic and functional cabinet by the visionary Italian architect and designer Andrea Branzi, with birch tree trunks growing through it, and a group of marine-hued ceramic stools and tables by the Seoul, South Korea–born Lee Hun-chung, who uses techniques and glazes dating back centuries. “The Koreans are very hot,” said Lincoln.

Most of the pieces come from a single collector who agreed to partner with Lincoln when the right space was found. “It’s not just a bunch of stuff thrown together, but an attempt to show art collectors that there is real thought and intellectual vigor in this enterprise,” said Lincoln. With prices that range from $150,000 for a vintage bookcase by the French architects and designers Charlotte Perriand and Jean Prouvé, to $975,000 for an “important” Wesley, Lincoln is not expecting a stampede of buyers. But what happens when this first round of things does get sold? “That would be a good problem to have,” Lincoln acknowledged, “Collective is neither a philanthropic endeavor nor an annex to the Parrish Art Museum.” Fingers crossed. In the meantime, maybe one can just think of it as visiting a private museum where you can sit on all the great furniture and get to sidle up super close to the art. A cabinet by the Italian architect Andrea Branzi is next to a 2015 lacelike bronze table by the American designer David Wiseman.
Cover: The Collective by Jeff Lincoln in East Hampton, New York.
Next Post