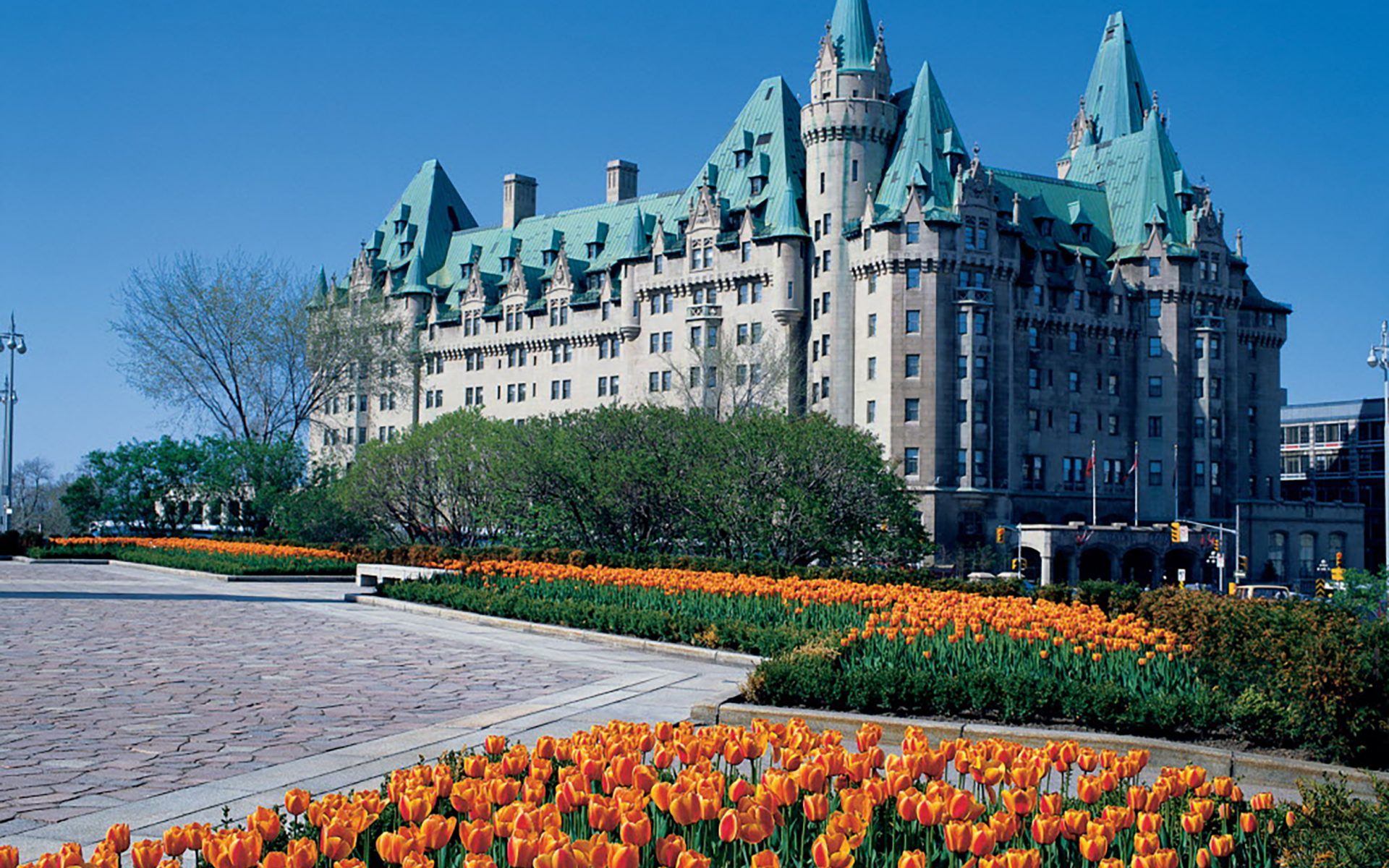 While North America may not be known for its castles, Canada has come up with its own spin on the medieval fortresses—in the form of railway hotels. Built between the late 19th and early 20th centuries by both the national railway companies and independent hoteliers, these grandes dames not only served as catalysts for contemporary Canadian tourism but also as some of the finest examples of châteauesque architecture in the country.

Between 1881 and 1885, the Canadian Pacific Railway (CPR) connected the coasts with a single railway line, opening up the entire country, especially the previously hard-to-reach destinations like Banff and Lake Louise in the Canadian Rockies, to tourism. In order to entice wealthy leisure travelers to journey across the continent, the CPR and its competitors, the Canadian National Railway (CNR) and the Grand Trunk Railway (GTR), constructed what would become the grandest hotels in Canada. The vast majority were built to emulate French châteaux, with elements borrowed from Scottish baronial architecture. As such, they often feature details like turrets, towers, granite façades, and steeply pitched copper roofs.

Though train travel is no longer the primary method of transportation across Canada, the railway hotels endure as some of the most luxurious hotels in the country. Discover nine of the most iconic ones below.

Recommended: Ten of the Most Luxurious Wellness Resorts Around the World The first of the grand railway hotels built by CPR, Fairmont Banff Springs opened in 1888 and was designated a National Historic Site of Canada exactly 100 years later. Along with elements of  Scottish baronial architecture, it also draws elements from the Arts and Crafts movement, seen in the rounded gables and rough stone masonry.

The skyline of Quebec City is dominated by the grand Fairmont Château Frontenac, opened in 1893. Balanced atop a cliff over Old Quebec and the St. Laurence River, it has been recognized as a UNESCO World Heritage Site. The storied rooms have hosted everyone from political leaders such as Winston Churchill and Franklin D. Roosevelt to celebrities. Its dramatic architecture, with a copper roof, turrets, and elaborate gables, was heavily inspired by the châteaux of France’s Loire Valley. One of the few railway hotels that was not built in the châteauesque style, the Algonquin in St. Andrews, New Brunswick, is a Tudor Revival building. The current structure was built in 1914 after a fire destroyed the original shingle-style building earlier in the year. When it opened in 1929, the 28-story Fairmont Royal York Hotel in Toronto was the tallest building in the British Empire. The hotel had more than 1,000 rooms, each with its own telephone and private shower and bath—uncommon features for hotels at the time. In addition to drawing from French châteaux, the architects of the Delta Bessborough in Saskatoon, Saskatchewan, which opened in 1935, was inspired by Bavarian castles in Germany. Of all the Canadian railway hotels Fairmont Château Lake Louise might have the most scenic setting—right on the glistening turquoise water beneath the mountains and the majestic Victoria Glacier in Alberta’s Banff National Park. Opened in 1890, it is now recognized for its progressive environmental focus. The Canadian capital of Ottawa couldn’t be passed over by the railway companies—the GTR opened this châteauesque hotel in 1912. Eschewing the château style, the architects of the Fairmont Château Montebello in Montebello, Ontario, decided to build one of the world’s largest (and most luxurious) log cabins, which opened in 1930. It was crafted with some 10,000 red cedar logs and 500,000 handmade wooden shingles. Beyond its majestic château-like appearance, the Fairmont Empress, opened in 1908 in Victoria, British Columbia, is known for its stellar afternoon tea—a tradition at the hotel for more than 100 years.