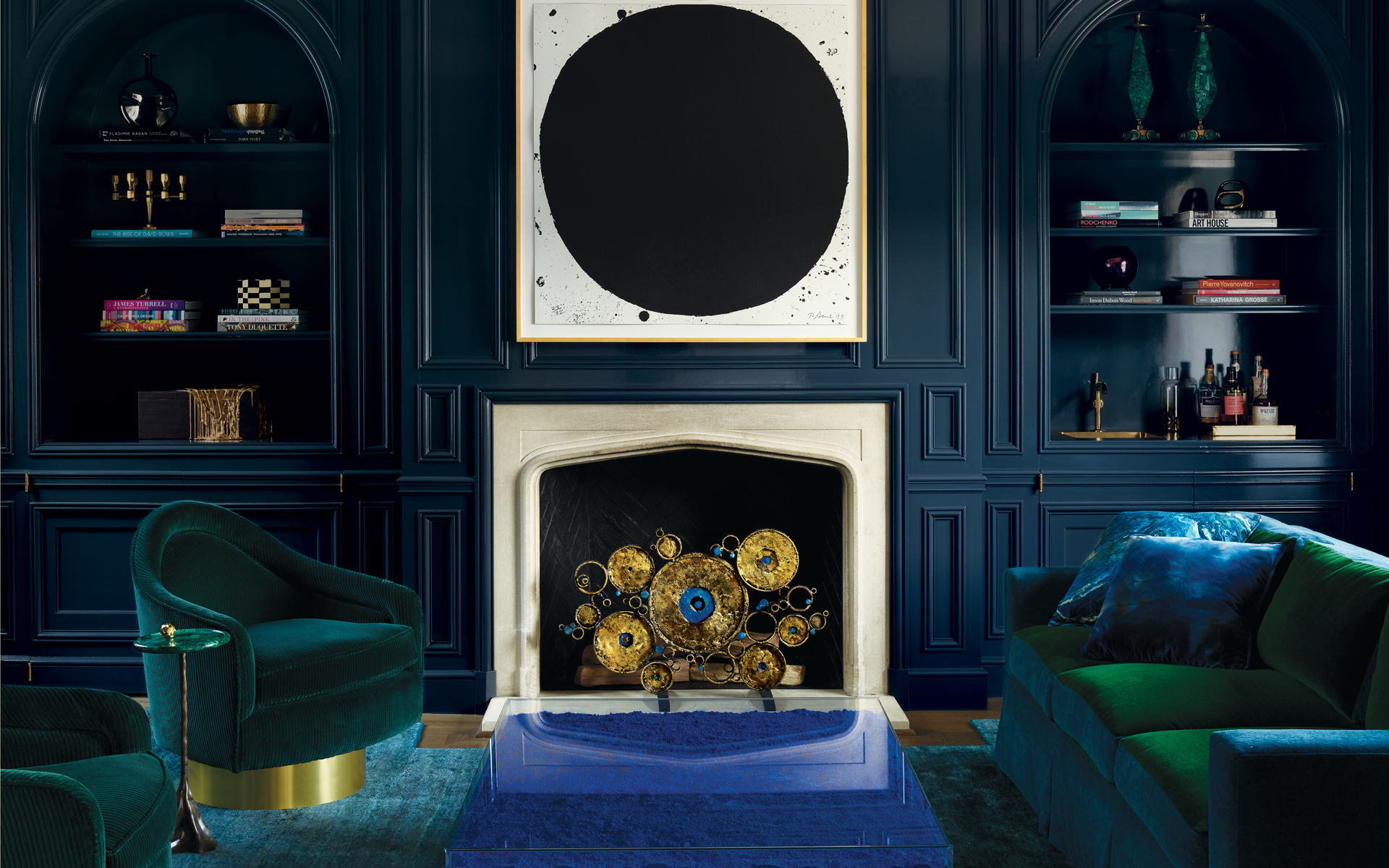 With a soigné scheme that embraces both light and dark, the designer transforms a Tudor-style residence with period-perfect details and modern elements 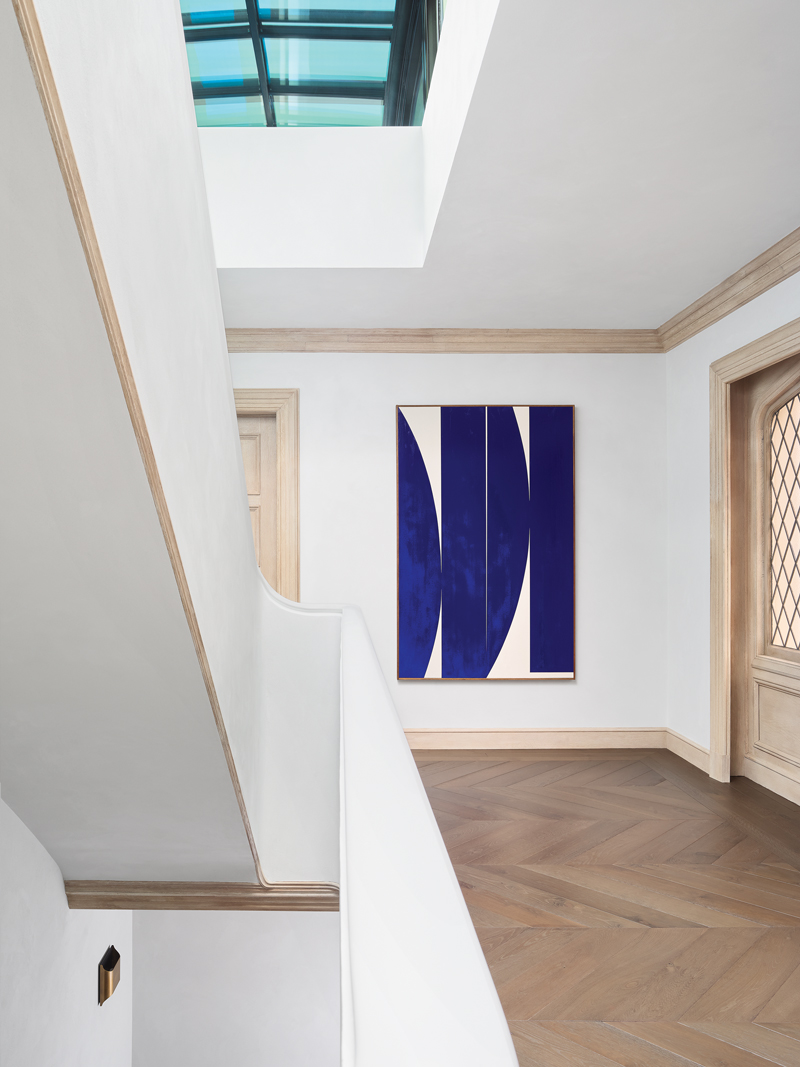 The house had good bones, and, as they say, location is everything. Situated on a coveted stretch overlooking San Francisco’s Presidio with unobstructed views of the Golden Gate Bridge, the three-story, Tudor-style home, built in 1927, had just enough appeal to make the buyers—a young couple with a growing family—forgive its shortcomings. Notably, there was the warrenlike interior, with heavy, dark paneling throughout, and nothing had been updated since the 1960s.

“The house needed everything,” says San Francisco interior designer Geoffrey De Sousa, whom the couple hired to reinvigorate the residence. “We didn’t change the footprint but focused instead on the interior, which really didn’t work for the clients.” 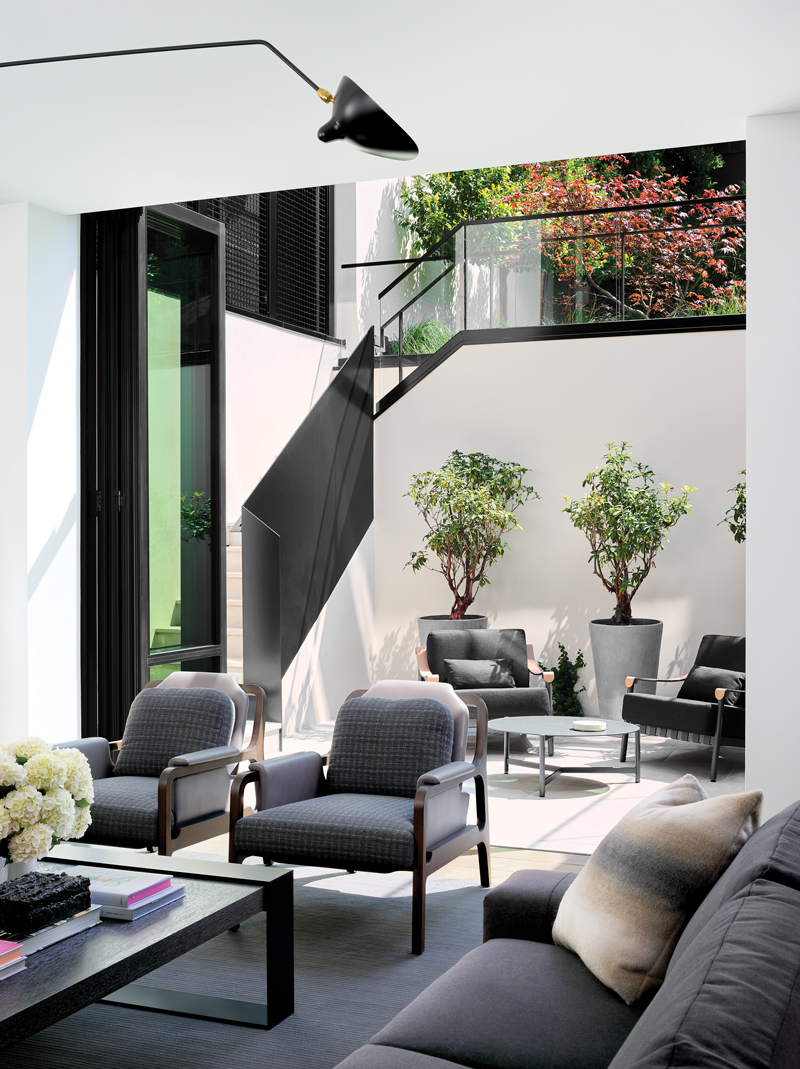 An arm of a Serge Mouille ceiling light extends over the subterranean family room’s Bright sofa, Liaigre cocktail table, and Caste armchairs; the chairs and table on the terrace are by Danao, and the planters are by Pennoyer Newman. Photo: Jose Manuel Alorda

One of the first steps taken by De Sousa—working with architect Stephen Sutro—was to replace the original Tudor-style staircase with a brighter, more contemporary design in creamy white plaster, while also adding a large skylight at the top that floods the previously moody space with natural light. Elsewhere, walls were taken down to open up rooms and improve flow.

The home’s basement level, which had been a compressed, unlivable space, was excavated to construct a modern family room with ten-foot ceilings, guest suites, and a wine cellar. Sliding steel-framed glass walls open onto a sunny sunken terrace with steps up to the backyard. 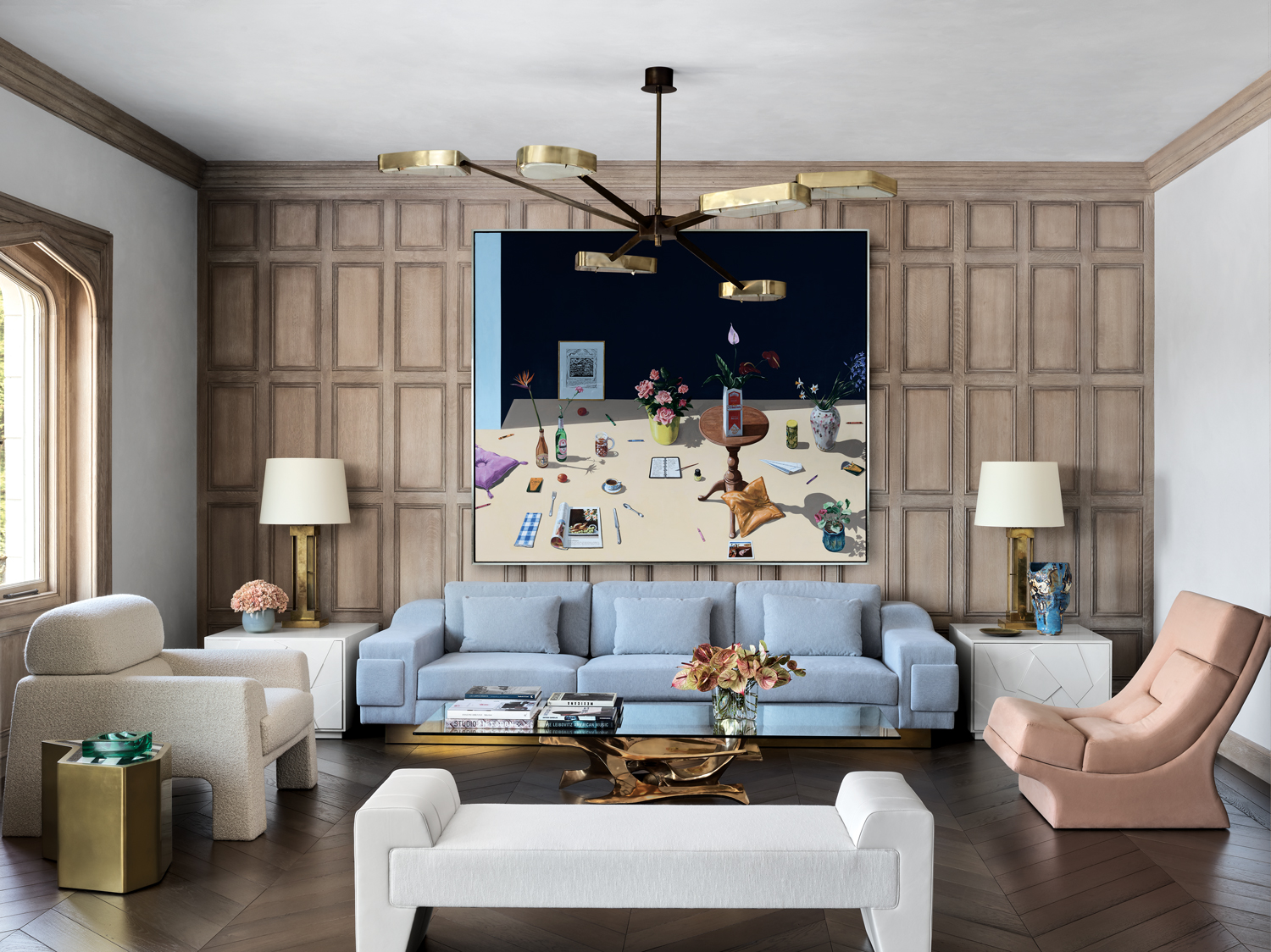 Overlooking San Francisco’s Presidio, the 1920s Tudor-style residence features abundant paneling, some of which designer Geoffrey De Sousa sandblasted to a natural shade. At one end of the living room, he added matching paneling behind a large Paul Wonner painting that surmounts a Charles Tassin sofa and chairs produced by Galerie May. Photo: Jose Manuel Alorda

In the living and dining rooms, De Sousa preserved the existing millwork but sandblasted it to its natural hue, creating a lighter, fresher backdrop for contemporary artworks by Chuck Close, Paul Wonner, Sara VanDerBeek, and others. He also prioritized chandeliers and sconces—a number of which came from his San Francisco design gallery, De Sousa Hughes—such as the living room’s eye-catching asymmetrical branching fixture with brass and onyx lights. “We chose lighting very early on—it’s kind of the jewelry of a project,” he says. 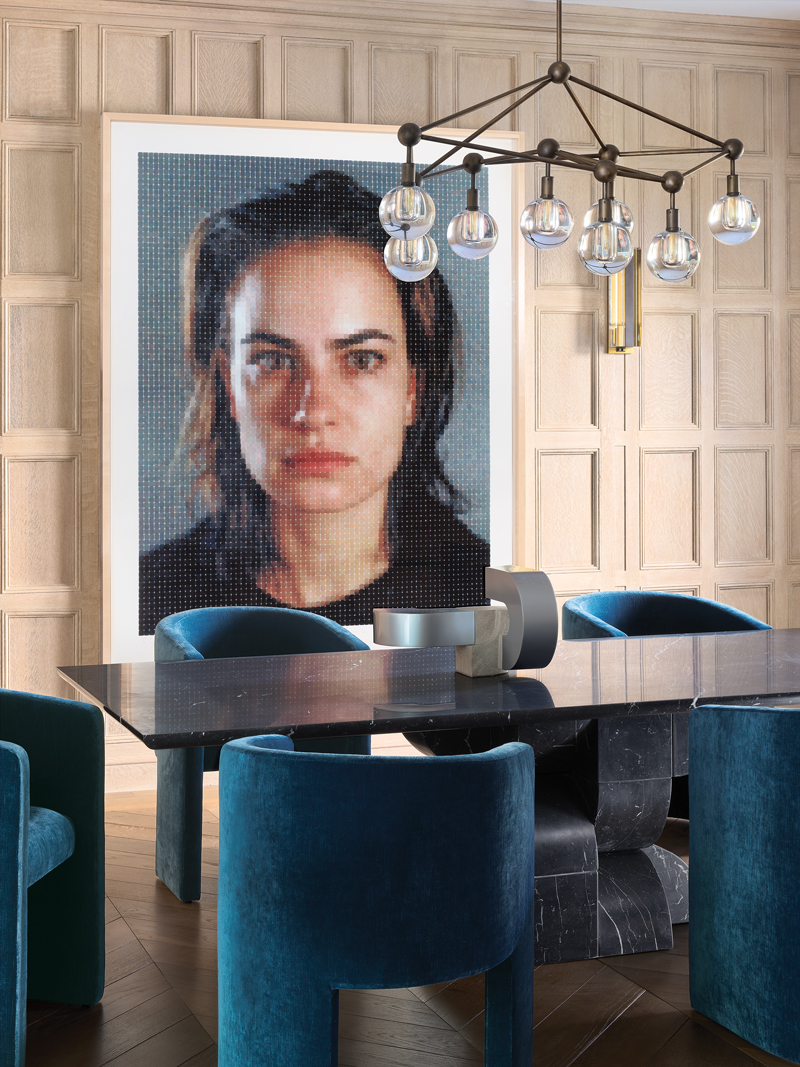 For the furnishings, he used sculptural upholstered seating: A trio of robust pieces by French designer Charles Tassin occupies one end of the living room, while a curvy Vladimir Kagan mini-sofa joins an iconic Joe Colombo lounge chair near the fireplace at the other. De Sousal, who notes that “textiles are really what I love to do,” sumptuously upholstered everything in pale mohair, bouclé, or Novasuede.

“The clients have a bit of a modern French aesthetic from the ’40s to the ’80s, and those are pieces that they were really attracted to,” says the designer, who drew inspiration from an apartment the homeowners had visited in Paris, even replicating its oak chevron floors. “English Tudor is usually very heavy and dark, so I was trying to find ways to marry that with furnishings that were lighter, more curvy, and a little sexier.” 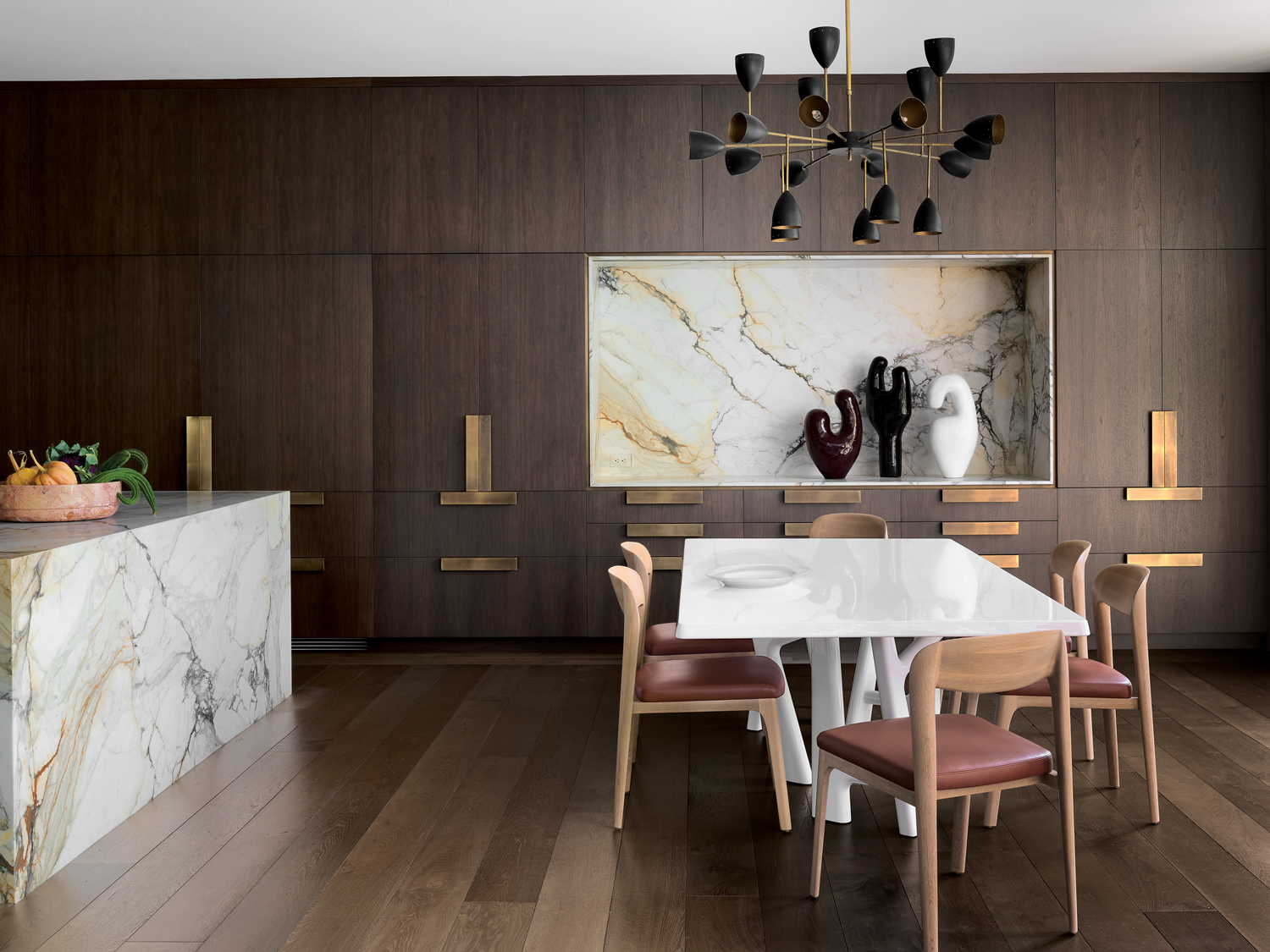 In the kitchen, De Sousa used Calacatta Macchia Vecchia marble to clad the island and a niche displaying ceramic pieces by Harvey Bouterse; he hung a Fabio Ltd. chandelier above a Jean-Pierre Tortil table and Caste chairs, and accented the walnut cabinetry with Moon bronze-finish pulls by Joseph Giles. Photo: Jose Manuel Alorda

Not that he entirely shied away from darker elements. In the open kitchen and informal dining area, De Sousa installed floor-to-ceiling chocolate walnut cabinetry but gave it a decidedly contemporary feel with clean, minimalist fronts adorned with oversize bronzed pulls. Several smaller rooms were demolished to create the free-flowing space, which De Sousa anchored with a rectangular island clad in Calacatta Macchia Vecchia marble, its painterly veins of rust, gray, and white contrasting with the surrounding expanses of wood. “I had this idea I wanted a monolithic island, but I didn’t want it to be with your typical barstools,” says the designer. “I wanted it to be a huge slab of stone that went directly to the floor.” 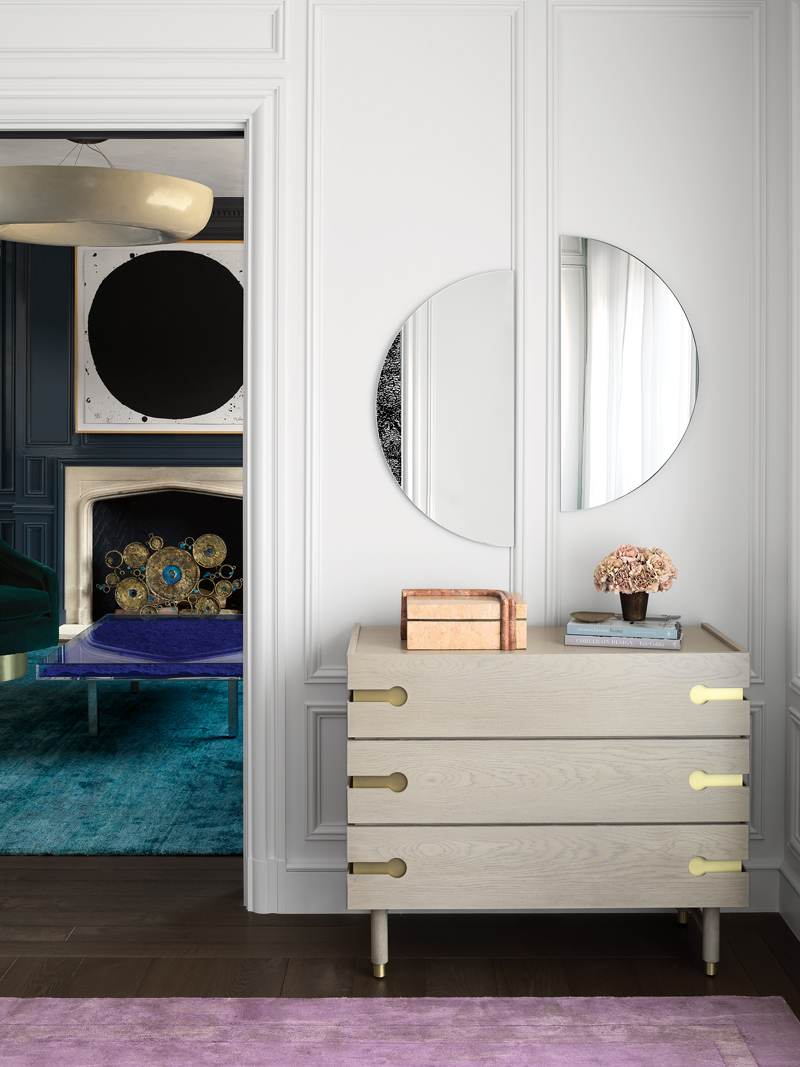 He also leaned into a deeper palette for the sitting area attached to the main bedroom, refinishing its wraparound paneling in a rich blue-gray lacquer. Vintage Milo Baughman swivel chairs and a custom-made sofa, all covered in complementary jewel-tone velvets, join an Yves Klein cocktail table atop a rug made from recycled silk saris. “I wanted the upholstery to be really sumptuous,” says De Sousa. “Dark has such a negative connotation in a home. Sometimes it is the nature of the space, and if you really play that up, you can get something that’s super moody and sexy.”

“English Tudor is usually very heavy and dark, so I was trying to find ways to marry that with furnishings that were lighter, more curvy, and a little sexier” 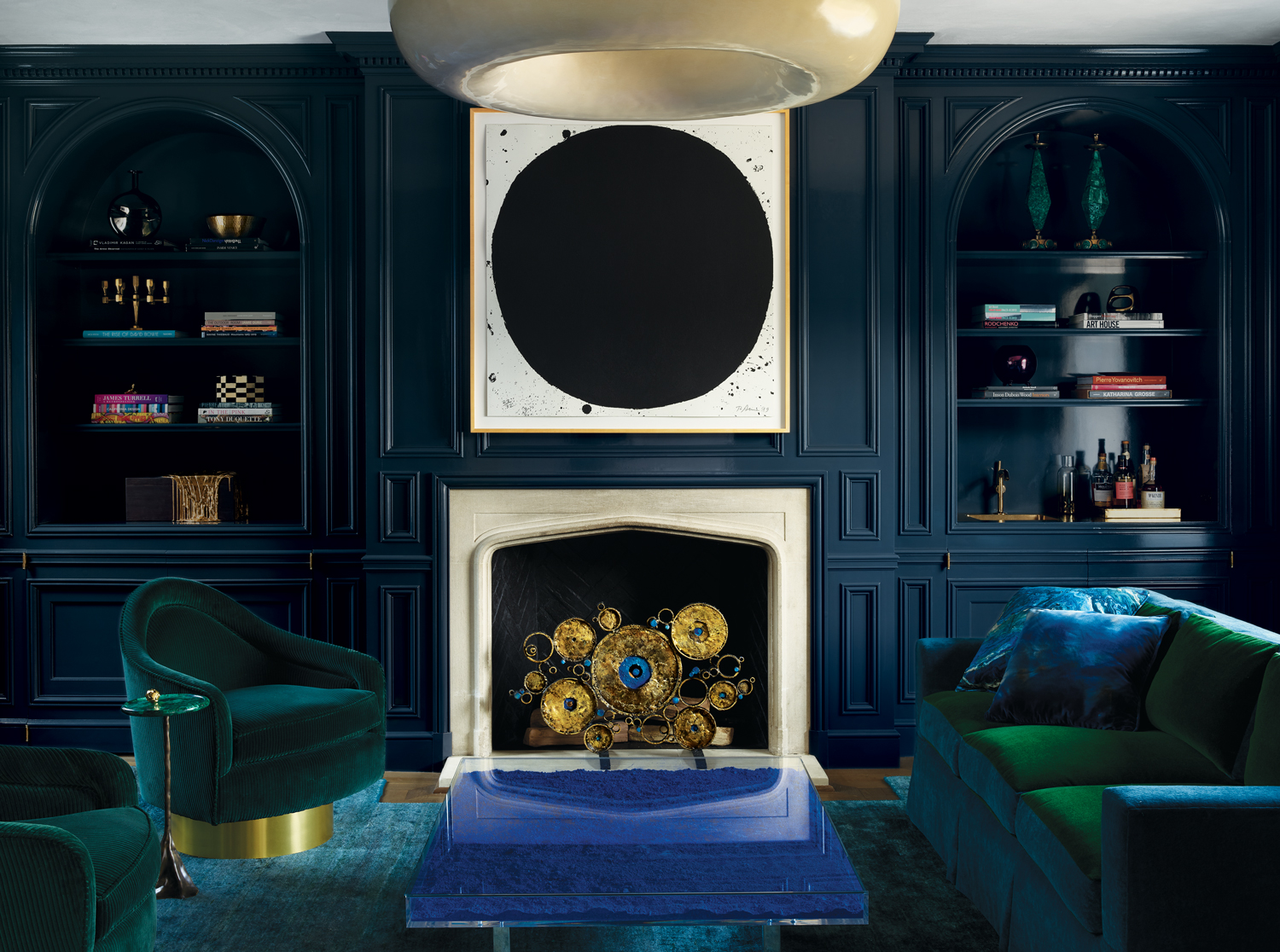 In the lounge adjoining the primary bedroom, Willem Racké Studio applied dark blue-gray lacquer to the paneling, which serves as a backdrop for a Richard Serra artwork above the original limestone fireplace, outfitted with a fire screen by James Bearden for Studio Van den Akker. A Robert Kuo light fixture is mounted above a custom-designed sofa by De Sousa, vintage Milo Baughman swivel chairs, an Yves Klein table, and a silk rug made from recycled saris by J.D. Staron. Photo: Jose Manuel Alorda

A black-and-white work on paper by Richard Serra is given pride of place above the room’s original limestone fireplace, its circular form echoed in the bronze fire screen by James Bearden as well as the Robert Kuo light fixture overhead. “All those curves are really nice in that space,” says De Sousa.

Paneled doors slide open to reveal the couple’s bed, dramatically set beneath a spectacular Murano glass chandelier and a custom-printed mural of an Arcadian landscape in striking grisaille that gives the space visual depth. De Sousa added bedside tables in pink quartz and brass and set everything on a grape-color carpet. 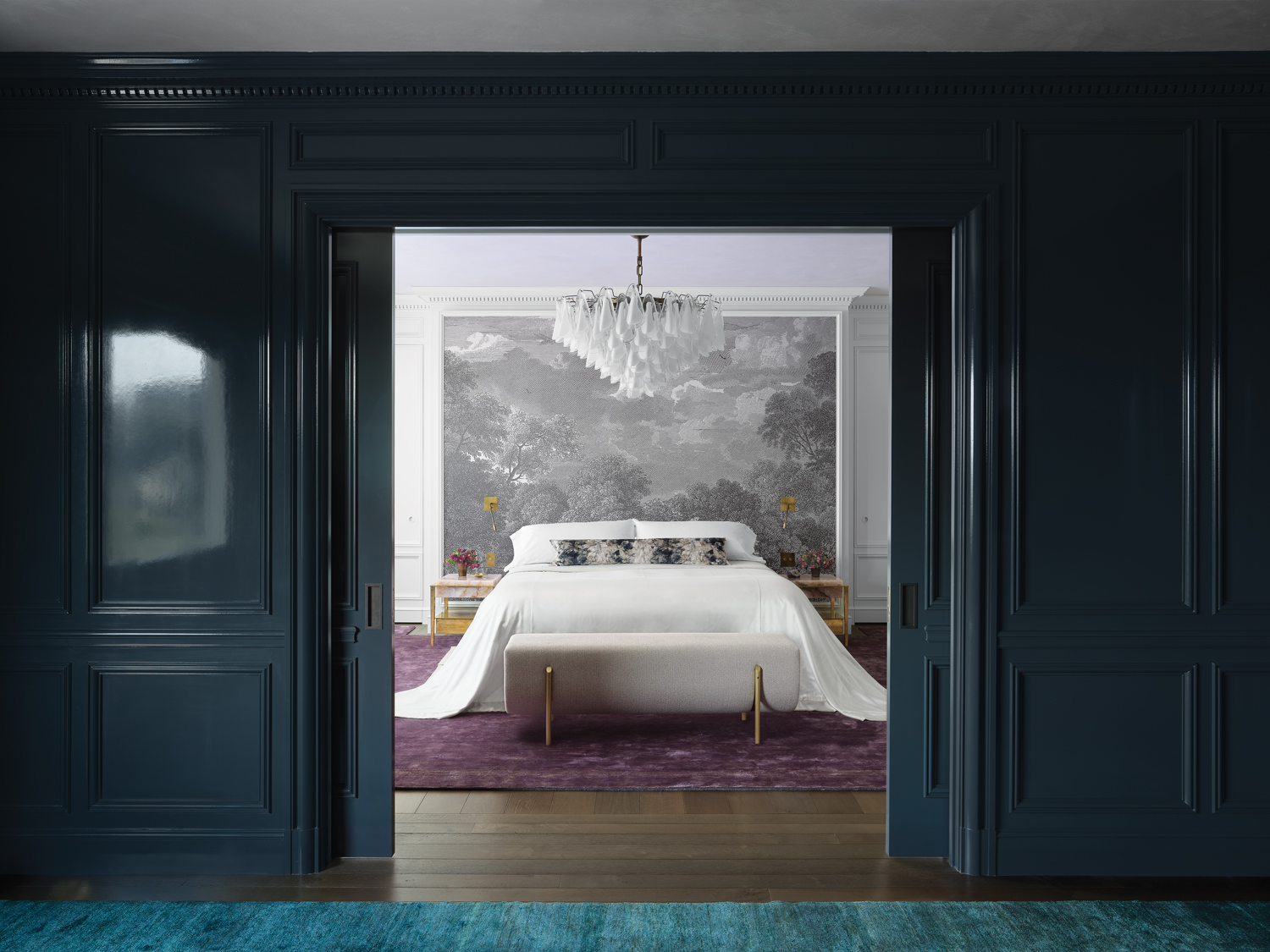 A custom-printed grisaille landscape adds a sense of depth behind the primary bedroom’s bespoke bed, Douglas Jennings nightstands, and a Natasha Baradaran bench, all overlooked by a Murano glass chandelier made by Fabio Ltd. The upper walls are finished in pink plaster, and the grape-hued carpet is by Rosemary Hallgarten. Photo: Jose Manuel Alorda

For De Sousa the bedroom suite is the crown jewel of a project that involved rethinking more architectural details than originally anticipated, from the new staircase and various creative updates to the abundant paneling. “When the clients recognized I was paying homage to the house but also making it steeped in today,” says De Sousa, “they really allowed me to just run with it.”

A version of this article first appeared in print in our 2021 Fall Issue under the headline “High Contrast.” Subscribe to the magazine.