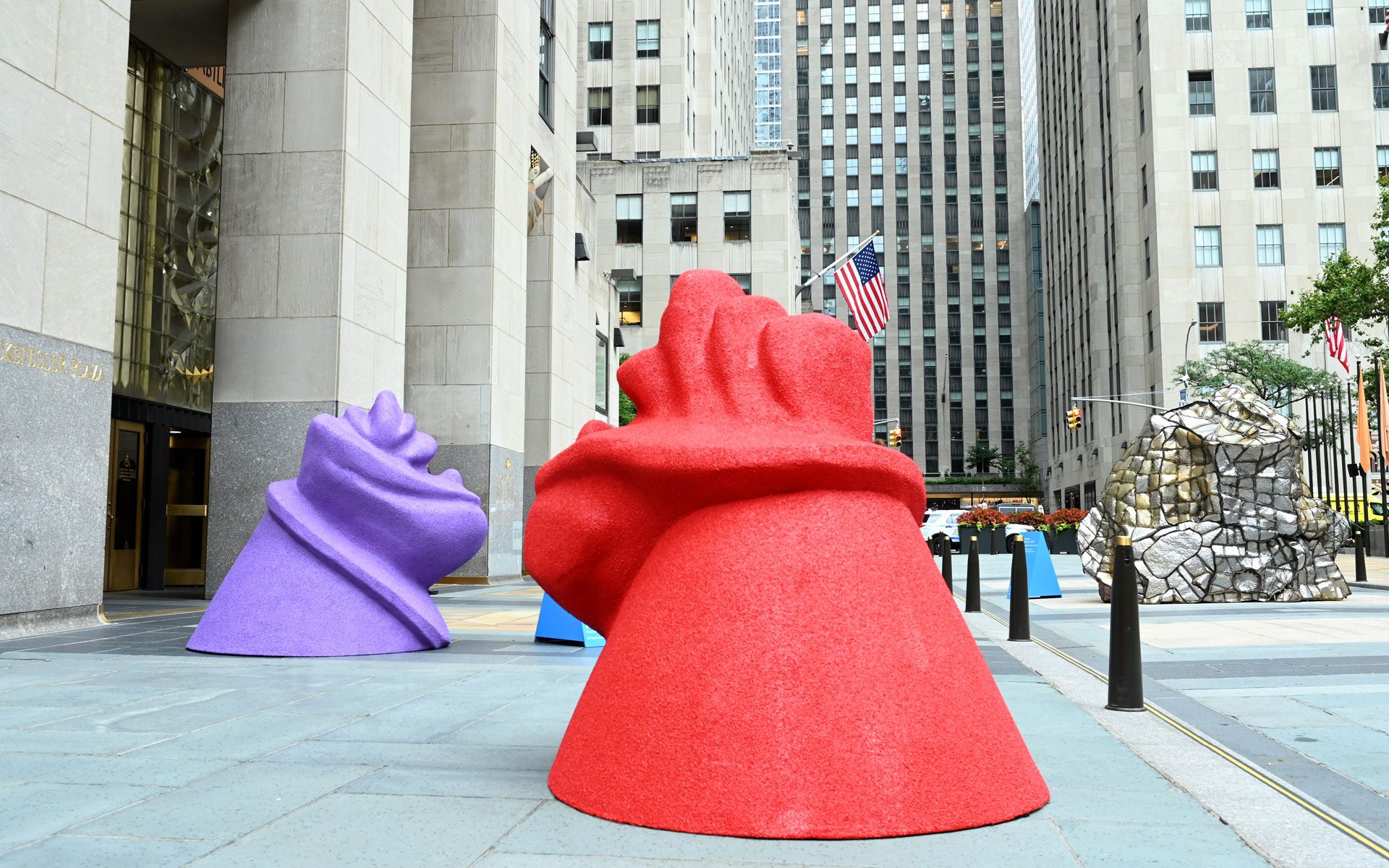 Featuring pieces by Ghada Amer, Thaddeus Moseley, and Andy Goldsworthy, the initiative’s second edition evokes what all city dwellers are yearning for: a retreat to nature

As one of the first major art fairs to fall victim to the COVID-19 pandemic, Frieze New York took its booths online this spring, and its London and Masters iterations are also going digital in October. Offering a much needed sign of optimism, however, the fair’s latest initiative is fully meant to be experienced in person. Presented by Frieze New York and developer Tishman Speyer, Frieze Sculpture at Rockefeller Center will see the work of six renowned artists occupy the Manhattan landmark’s plaza from September 1 to October 2. They include Andy Goldsworthy, Ghada Amer, Thaddeus Mosley, Beatriz Cortez, Lena Henke, and Camille Henrot. 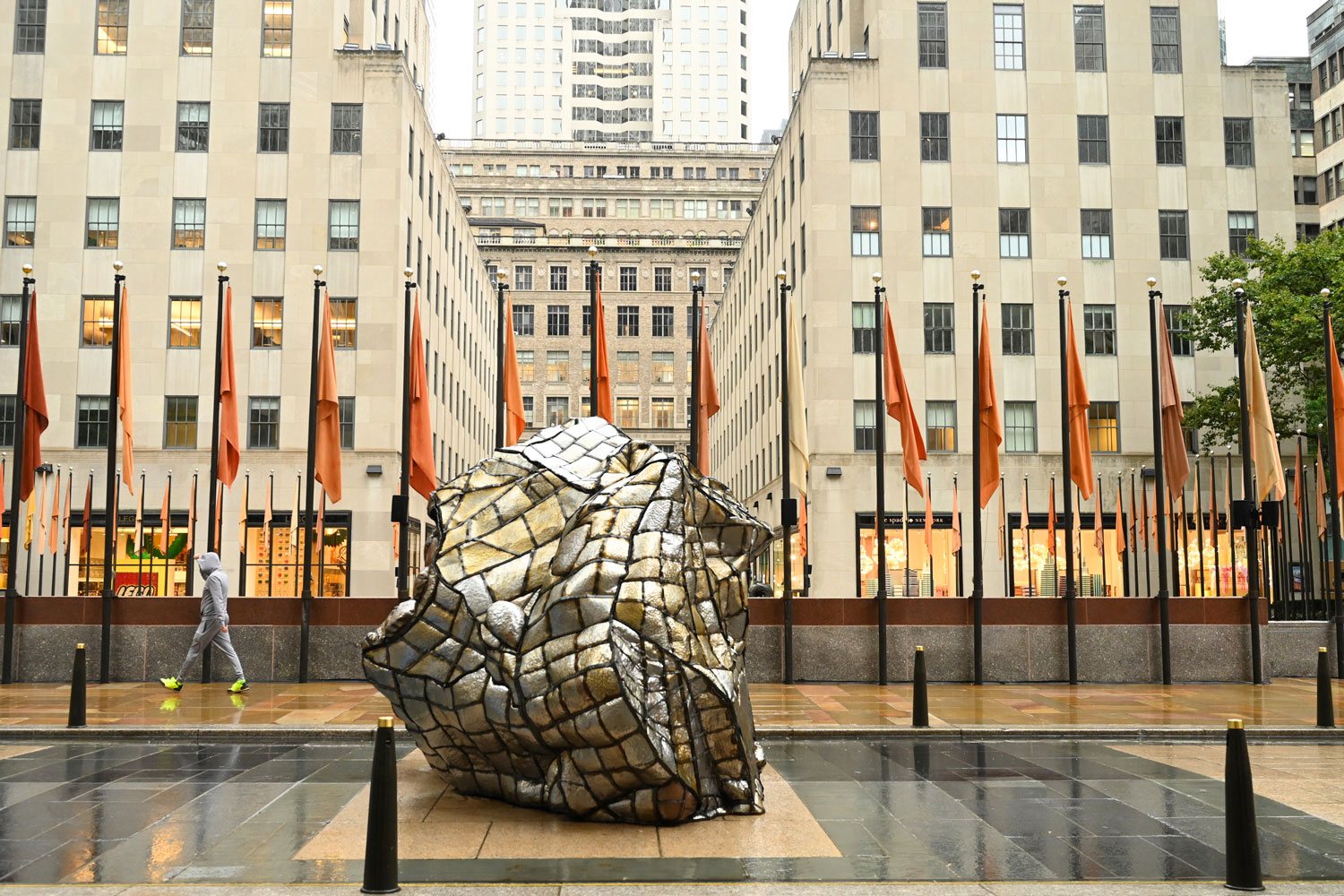 This will be the second edition of Frieze Sculpture, which was supposed to take place in April but was postponed and has been reduced by approximately half in order to follow city and state guidelines for social distancing. Curating the free and public initiative for the second time, Brett Littman (director of the Isamu Noguchi Foundation and Garden Museum in Long Island City) meticulously adapted the initial programming to be strictly outdoors. Originally slated to open on the 50th anniversary of Earth Day, the exhibition is themed around nature and organic material, which Littman believes will be even more resonant with visitors after having quarantined for months.

“Whereas last year I was juxtaposing works around the urban architecture and existing art, this year I was more focused on the idea of the urban garden and nature in the middle of the city,” Littman, who cites Noguchi’s philosophy on the relationship between art and nature as inspiration, tells Galerie. “I was also interested in thinking about how in the 1800s, there was a botanical garden on the original site of Rockefeller Center. When you look at old photos of New York, it’s fascinating to see how much farmland and raw nature there was.” 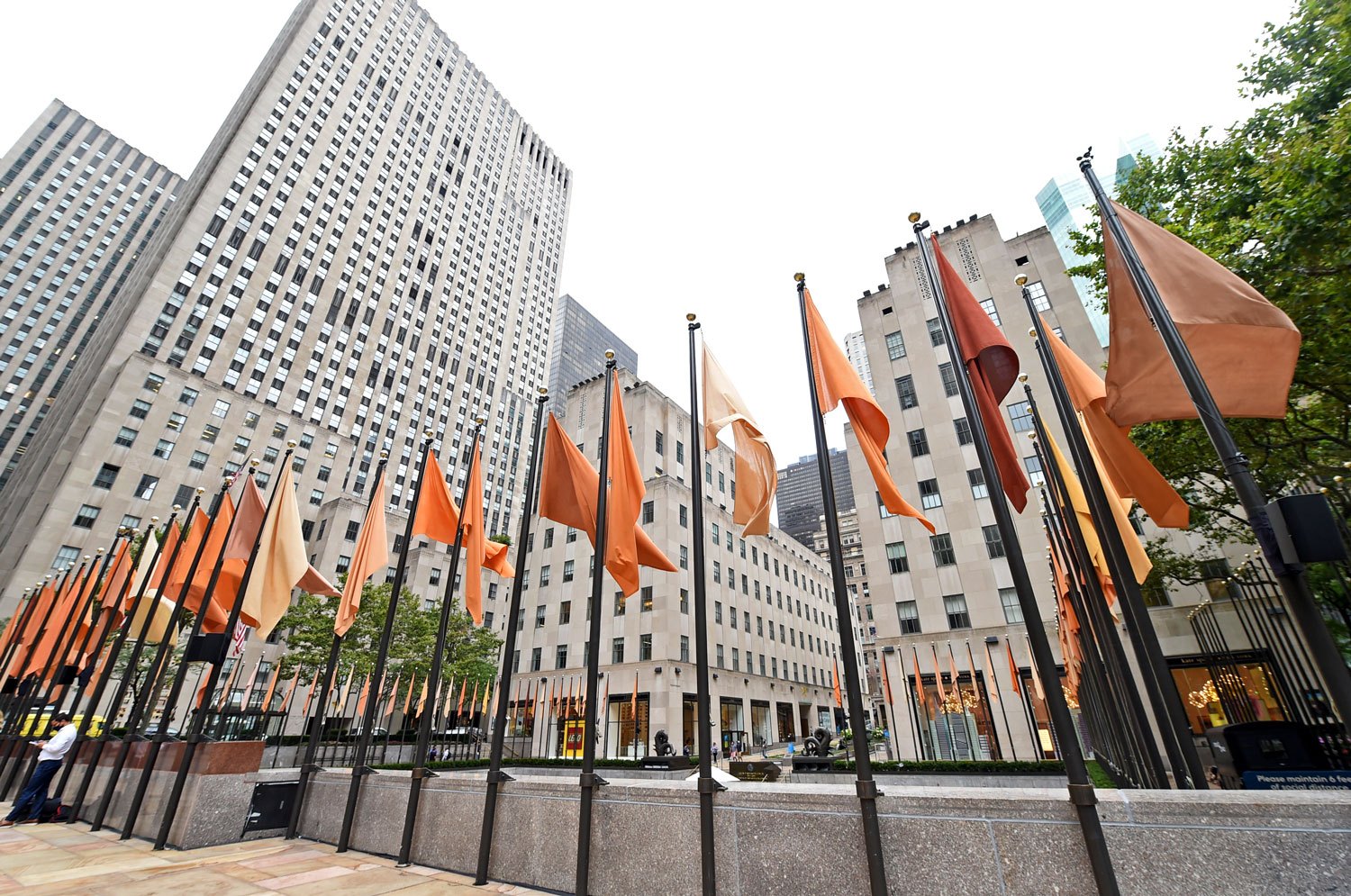 A native New Yorker, Littman has found a renewed connection to nature that has been vital to his mental health during the pandemic. “I started driving about two hours outside of the city to refuel and re-understand how much nature is around us in New York State. It’s actually stunning. I’ve taken the most incredible hikes,” says Littman on visiting sites like the Blue Mountain Reservation in Peekskill and Innisfree Garden in Millbrook for the first time. “While we can’t exactly re-create that experience at Rockefeller Center, I hope the project is evocative of that desire, which many of us are having right now.”

Littman shares that British contemporary sculptor Andy Goldsworthy, who travels often for site-specific commissions, hasn’t left his Scotland studio in six months. Instead, he has been working on Red Flags, which will temporarily replace Rockefeller Center’s iconic flags with those colored by earth gathered from each of the 50 states. “One can read something optimistic, political, or fatalistic with this piece. It has many layers of meaning,” says Littman. 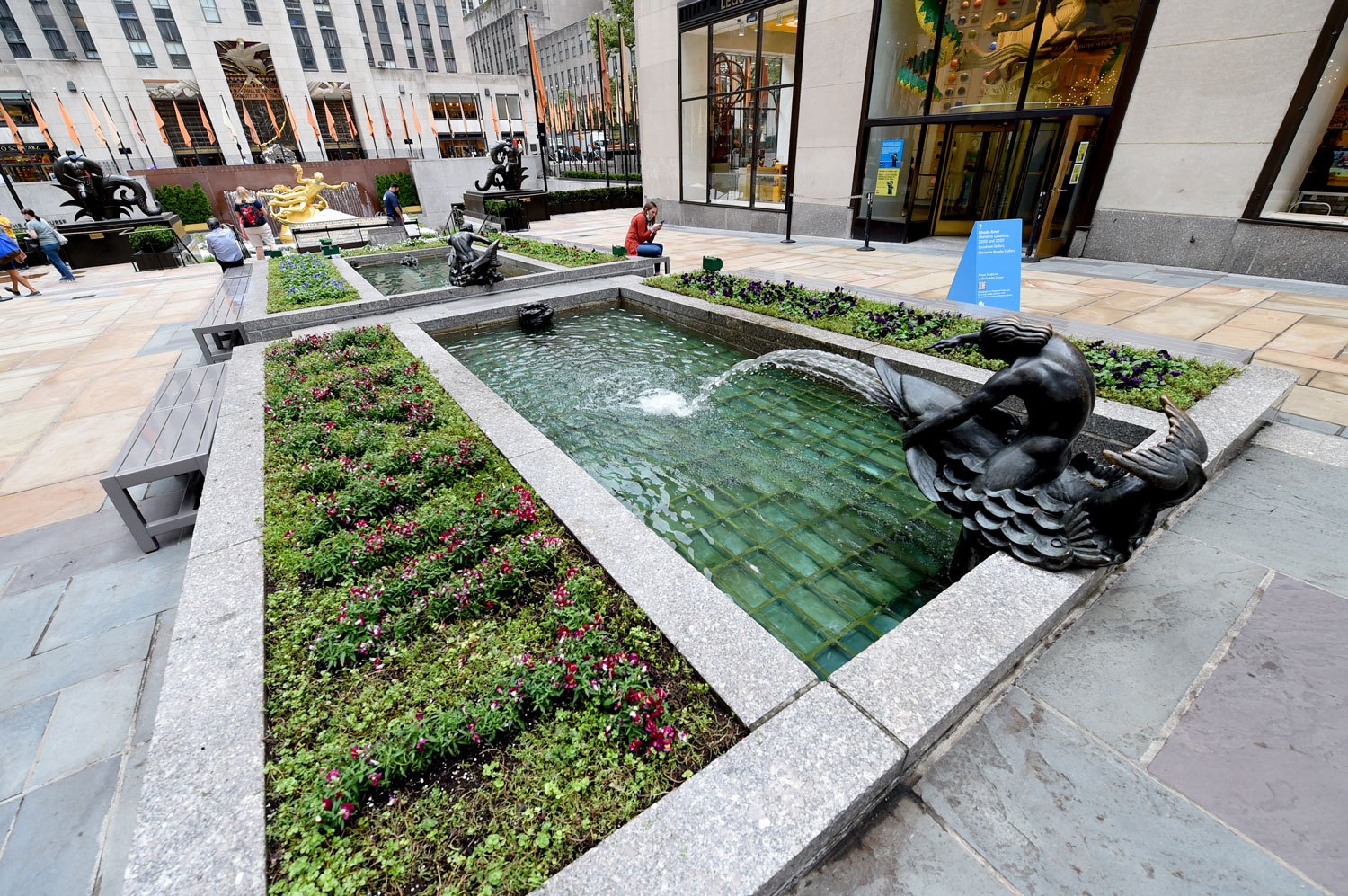 Taking over the center’s Channel Gardens is Ghada Amer’s Women’s Qualities. Two decades ago, the Egypt-born, New York–based artist first conceived and installed the work, in which she asked people in Pusan, South Korea, to share the qualities they associate with women. For the revival of this piece, Amer combined responses from 2000 with new ones from 2020, both of which are written with flowers to create a living portrait of the impossibly ideal woman. Stereotypes like “good cook” and physical attributes like “sexy,” composed of orange nemesia and blue ageratum blooms, are, therefore, contrasted with characteristics such as “resilient” and “independent” in red and pink calibrachoas. 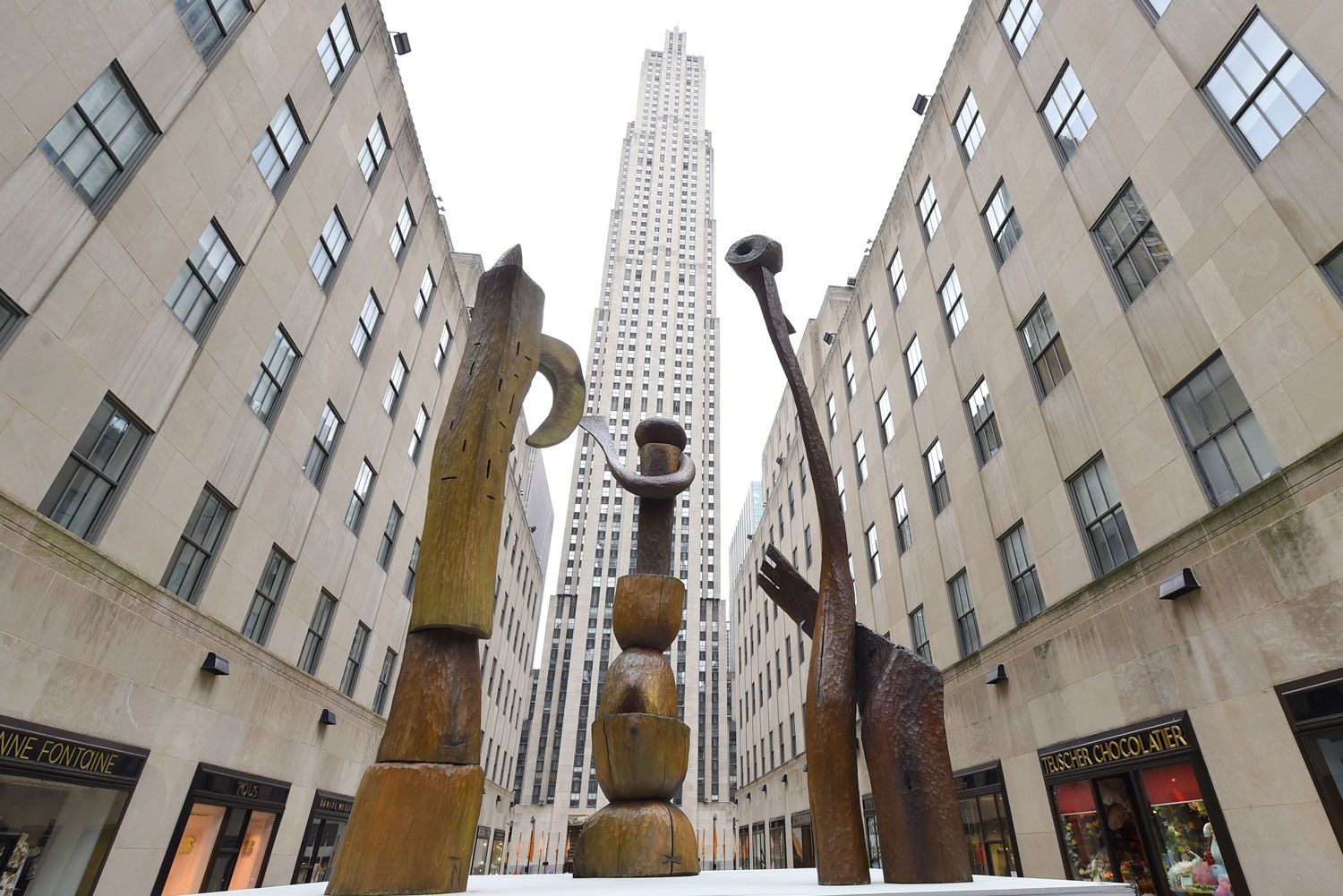 Another highlight comes from Pittsburgh-based artist Thaddeus Mosley, who, at 94, makes a career first with editioned work for outdoors. Three monumental bronze sculptures, entitled Illusory Progression, True to Myth, and Rhizogenic Rhythms, sit at the apex of the Channel Gardens on Fifth Avenue. Experimenting with weight, balance, and physics, these represent the first casts the self-taught artist has ever made of his wood sculptures of the same name.

Also in the Channel Gardens is Camille Henrot’s Inside Job sculpture, which resembles the shape of a shark and the beak of a bird. With this bronze piece, the Paris-born, New York artist explores ideas of threat versus tenderness and nurturing. Henrot also presents a plant-based series of small-scale, bouquet-like works where each piece takes its name from a book, forming a library of flowers. 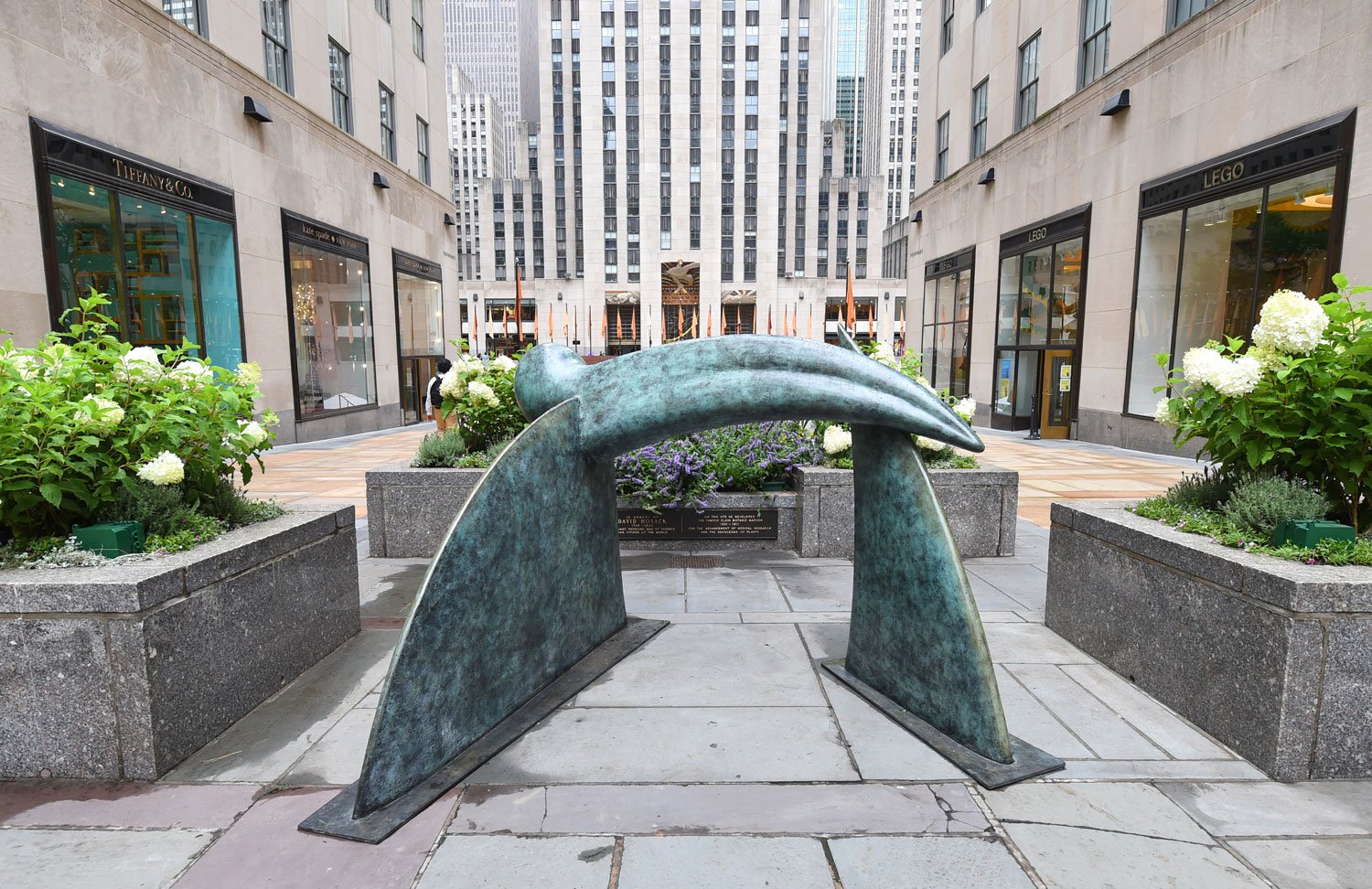 German artist Lena Henke also brings animal imagery to Rockefeller Center with two new monumental sculptures, R.M.M. (Power Broker Purple) and R.M.M. (Organ, Organ, Organ Red). The colorful horse hooves mirror nearby stallion artwork, such as Robert Garrison’s stone bas-relief featuring Pegasus, Morning, Present, Evening (1932), at the center’s entrance at 1270 Avenue of the Americas. Their inspiration also stems from more personal sources, including the artist’s upbringing in an equestrian family and her readings of Robert Moses and urban planning. “I love the idea of a giant horse galloping over 30 Rock,” adds Littman. “It’s like this ghost image of a horse running wild in New York City.” 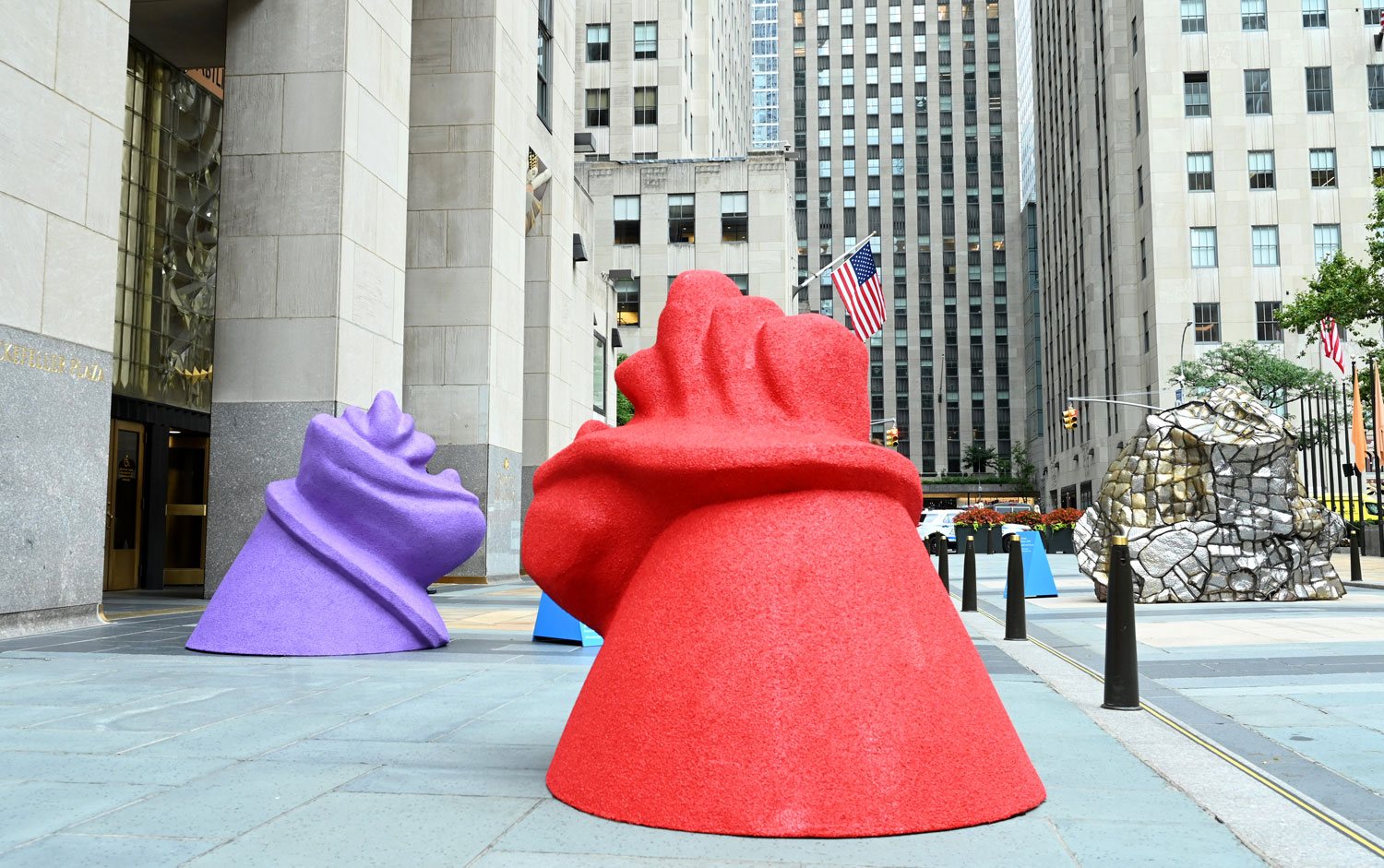 The inaugural recipient of the FriezeLIFEWTR Sculpture Prize, multidisciplinary, Los Angeles artist Beatriz Cortez created a new piece with a steel frame and sheet metal. Glacial Erratic evokes an ancient boulder, like those found in Central Park, representing geological formation, migration, and the passage of time.

Whether grounded in reality or the fantastical, the works featured in the Frieze Sculpture exhibition present a thought-provoking, wide-ranging commentary on nature’s past, present, and future. “In the end by rejiggering things, we were able to retain the strongest pieces to tell the story in the most concise way,” says Littman. “It’s a little bit like writing a poem from a long book—it’s about trying to pick the right words.”