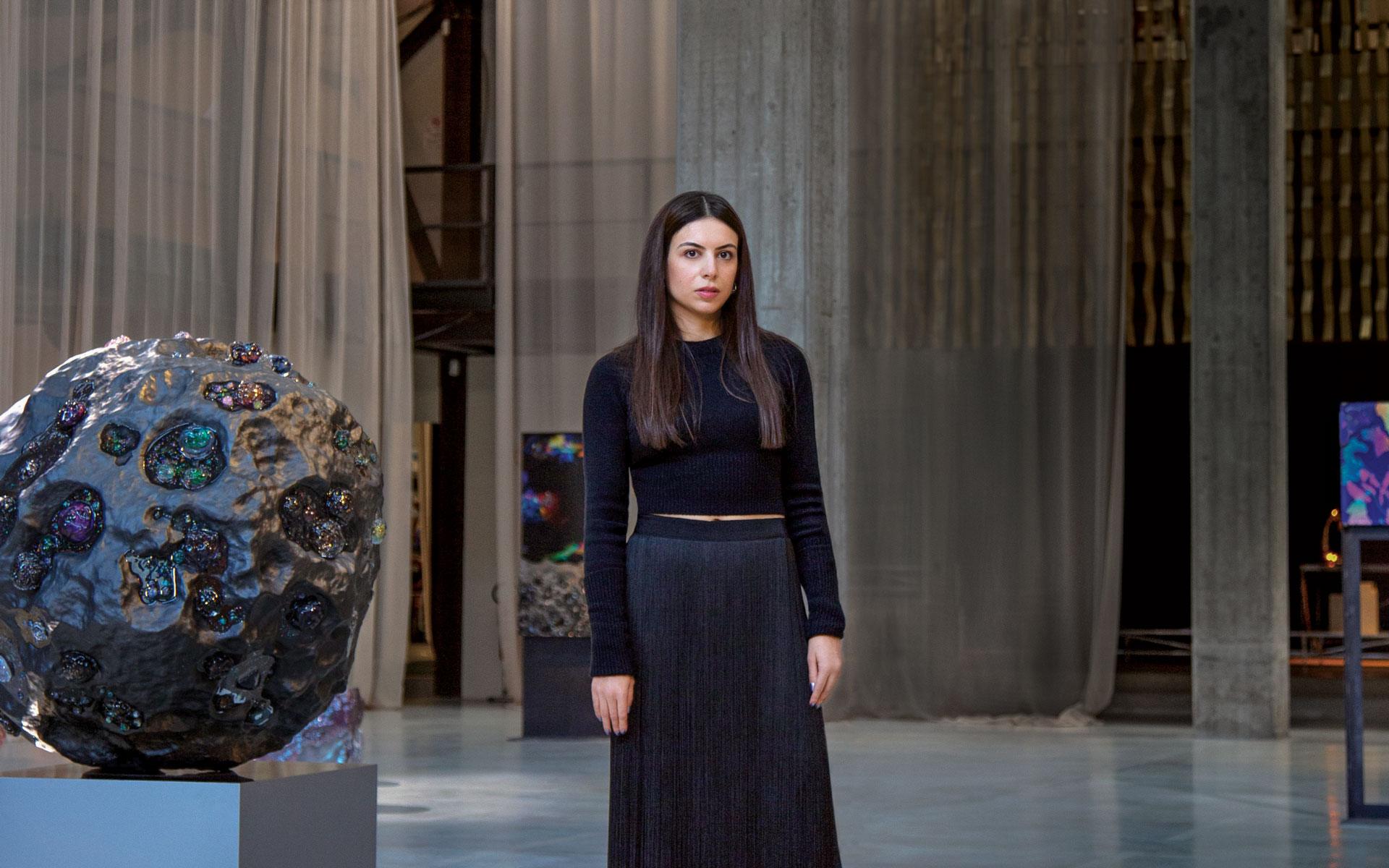 5 Emerging Designers You Need to Know in 2021 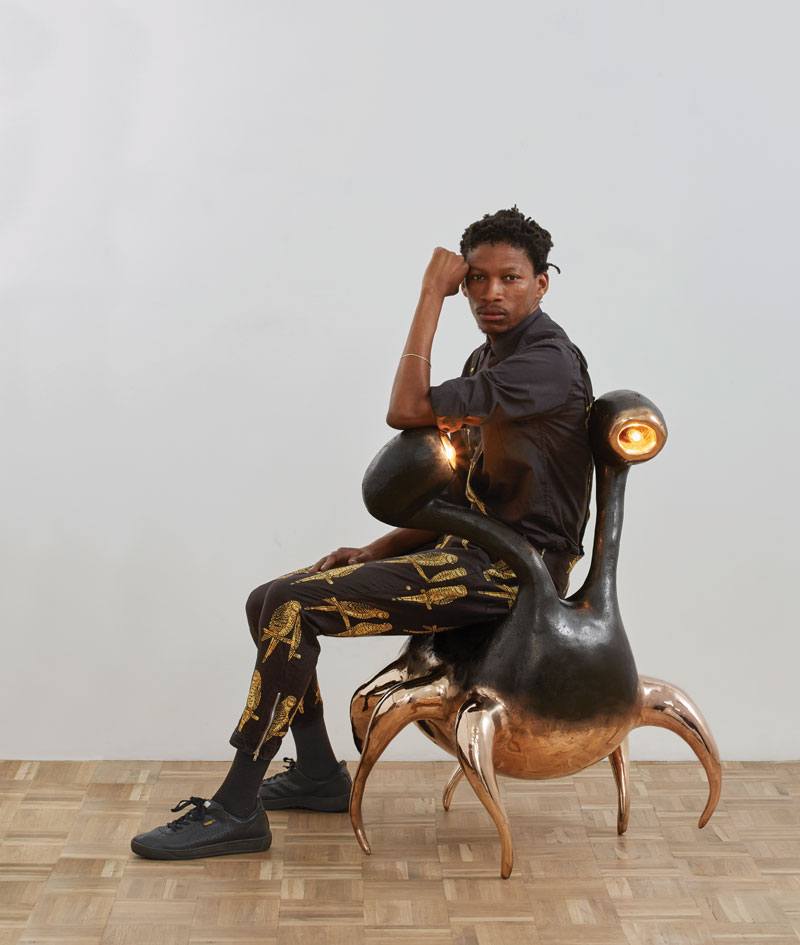 “My work is my vocabulary,” says Atang Tshikare, the South African creative whose graffiti art has appeared on sneakers for Adidas and Puma and in contemporary commissions for BMW and MTV. Tshikare made his international debut four years ago at Design Miami/, showing three sculptures with Cape Town’s Southern Guild gallery. These “zoomorphic, primordial, fantastical creatures”—the first sculptures the self-taught artist ever made—sold out, thereby sealing his fate as a rising star. He’s currently at work on a new collection of wood, bronze, and stone pieces while exploring the possibilities of creating wallpaper and fabrics. “I don’t need to be everybody’s type,” says Tshikare. “I’m working on things like this for myself.” 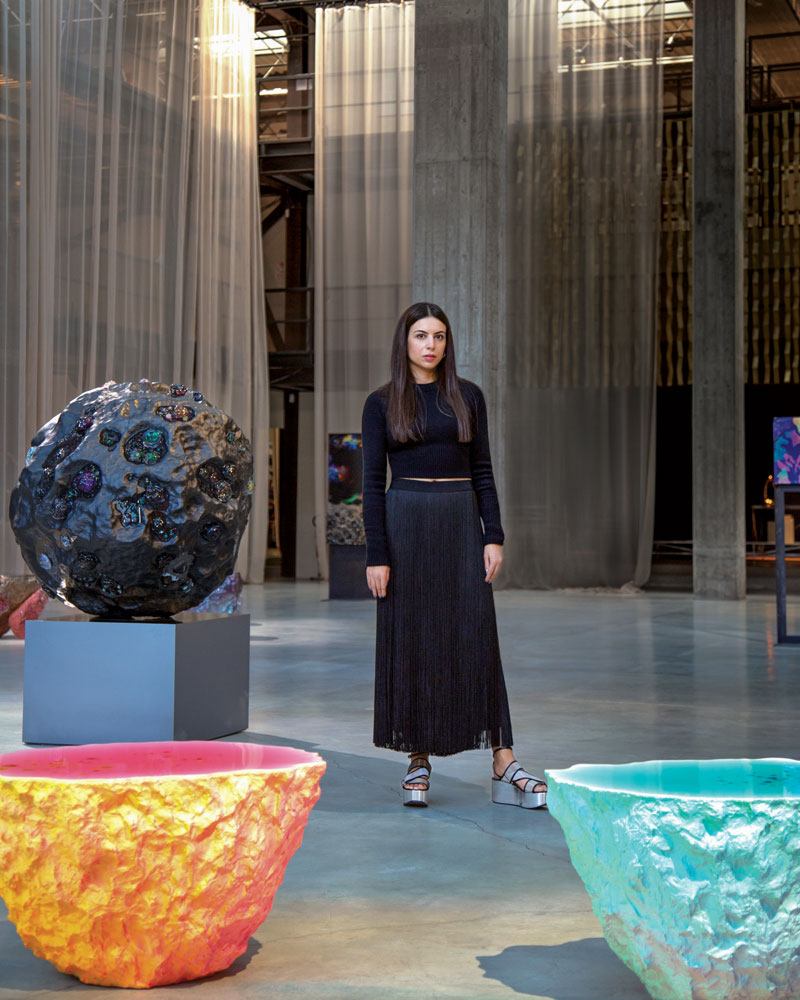 “Sometimes I feel my work disorients people. They don’t recognize what’s synthetic or what’s natural,” says Flavie Audi of her newest pieces, recently shown at Milan’s Nilufar Depot. The collection of fiberglass, resin, and bronze tables juxtapose rocky, boulderlike textures with mirror-polish finishes and resemble ultramodern, space-age geodes. The London-based artist machine carves the organic fiberglass shapes, then paints them with ChromaFlair, a pigment primarily used on cars that changes color in different light and angles, before covering them in resin and coating with lacquer. “These are fragments of landscape that can be used in a domestic context,” she says of the results. “There’s a mystery around them, but I’ve always felt the most beautiful things I’ve experienced were the mysterious ones.” 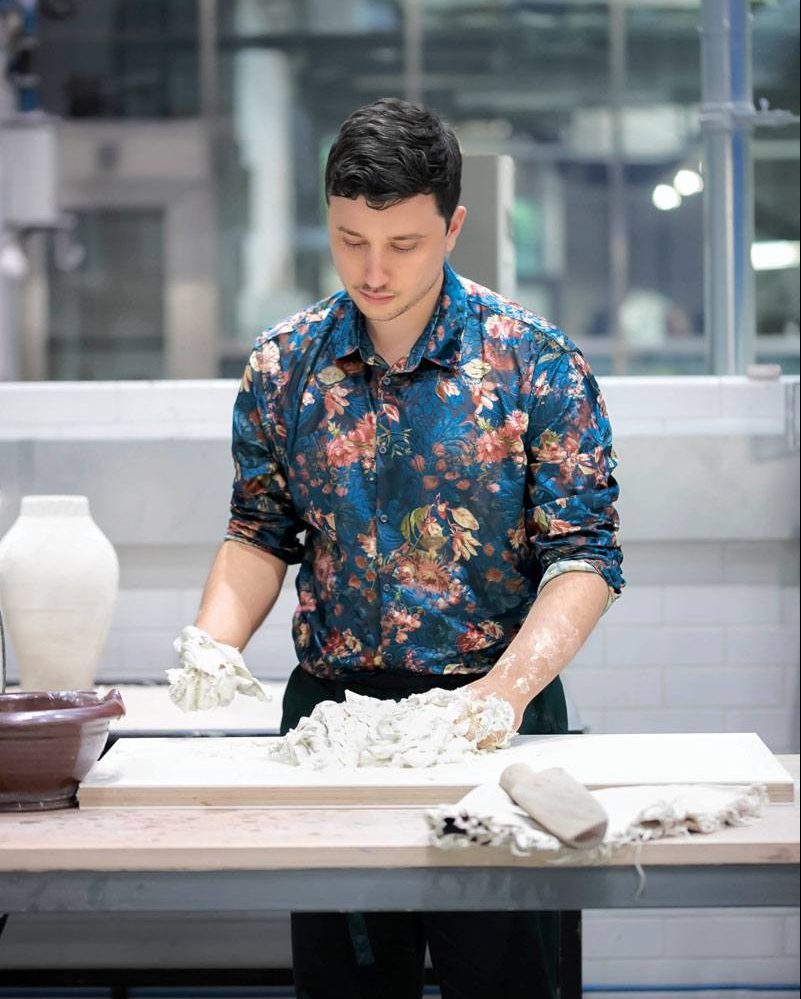 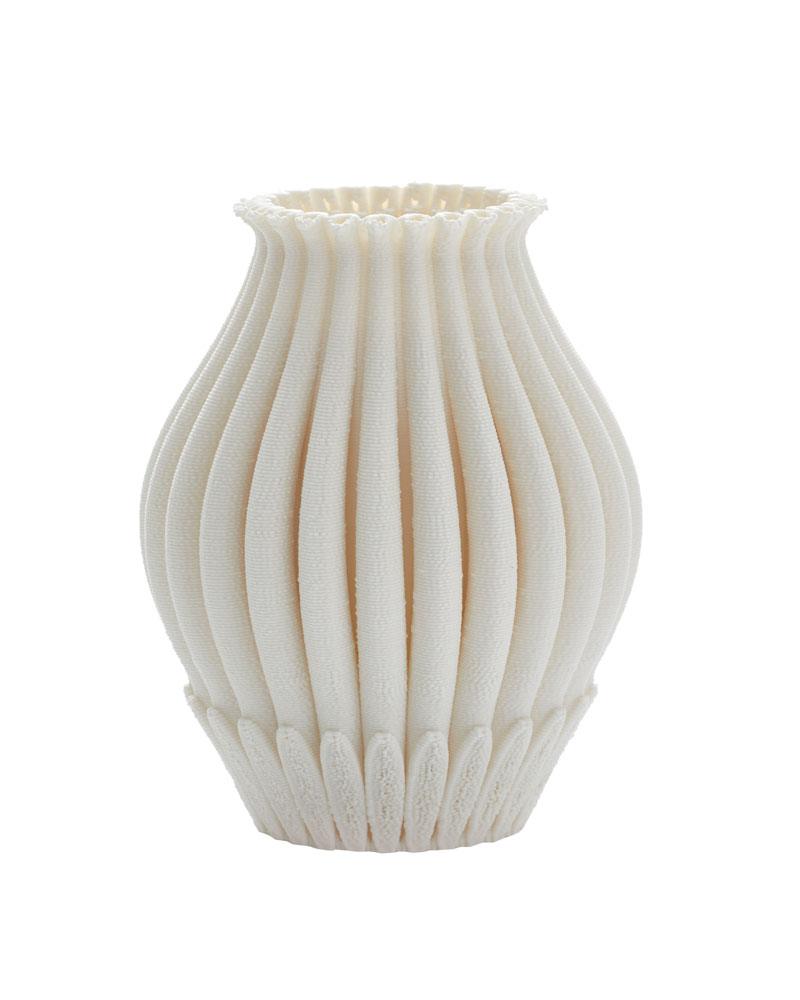 Nico Conti fell in love with porcelain after reading The White Road: Journey into an Obsession, ceramist Edmund de Waal’s historical ode to the material. Soon after, the Maltese native enrolled in the ceramics program at the Royal College of Art in London, where he became intrigued by using 3D printing in this centuries-old craft. Conti ultimately developed an incredibly time-intensive process whereby he manipulates the porcelain as it’s being printed, in a collaboration of man and machine that can take 10 to 20 hours for each one-of-a-kind vase—and that’s before firing. “I am trying to challenge the skeptics who are against the idea of mixing technology and craft,” he says. “It would be a pity to have something that creates such unique results and not be able to push it and test its full capability.” 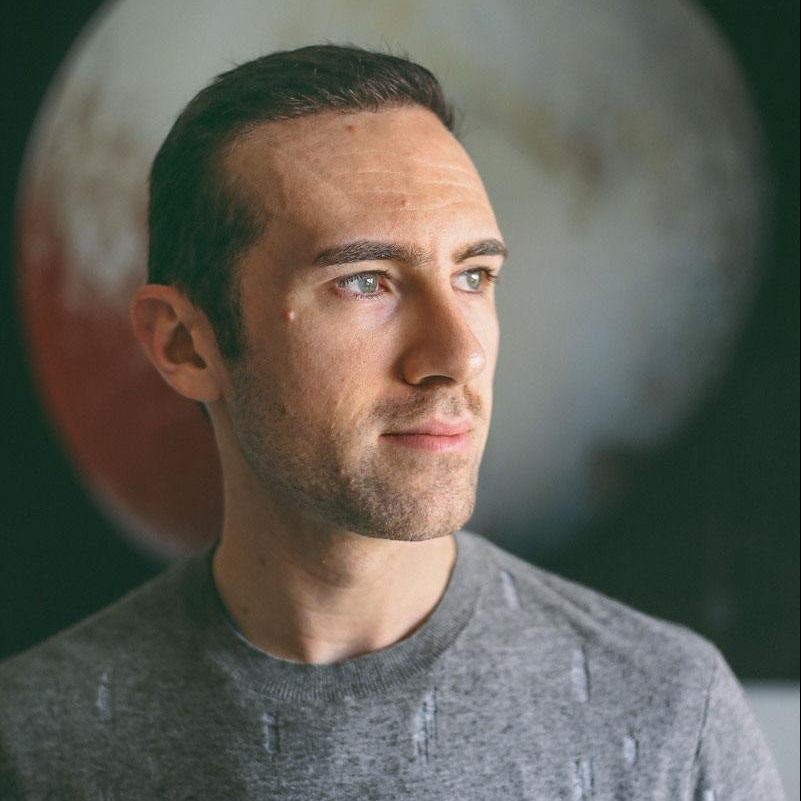 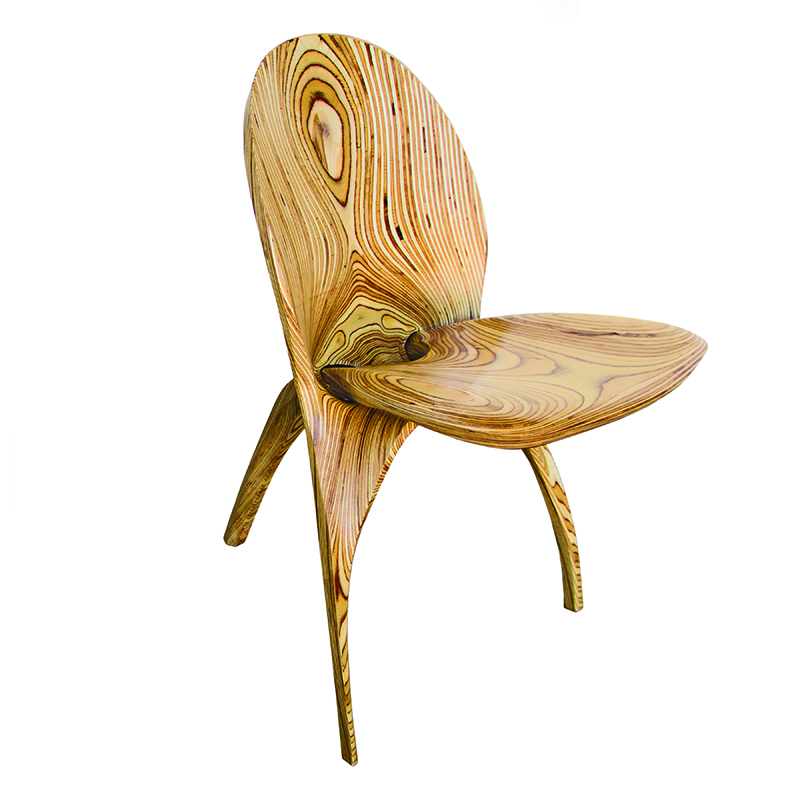 “I’m trying to actively look for a way to soften a material, whether visually or physically,” says Ammar Kalo. “All the work I do is viewed through that lens.” This is evident in Kalo’s award-winning Stratum chair—a three-legged, folding birch plywood invention that was acquired by the Cooper Hewitt, Smithsonian Design Museum. Over the years, the talent has developed a methodology that melds traditional technique with advanced technology. His latest collection, Carabus, is a deceptively complicated blend of formed copper with walnut and camel leather. He’s also working on a new collection of lamps and tables that combine wood with marble, a first for him. “I’m quite pragmatic in the way I see things,” he says. “For me it’s all about process, details, and materials.” 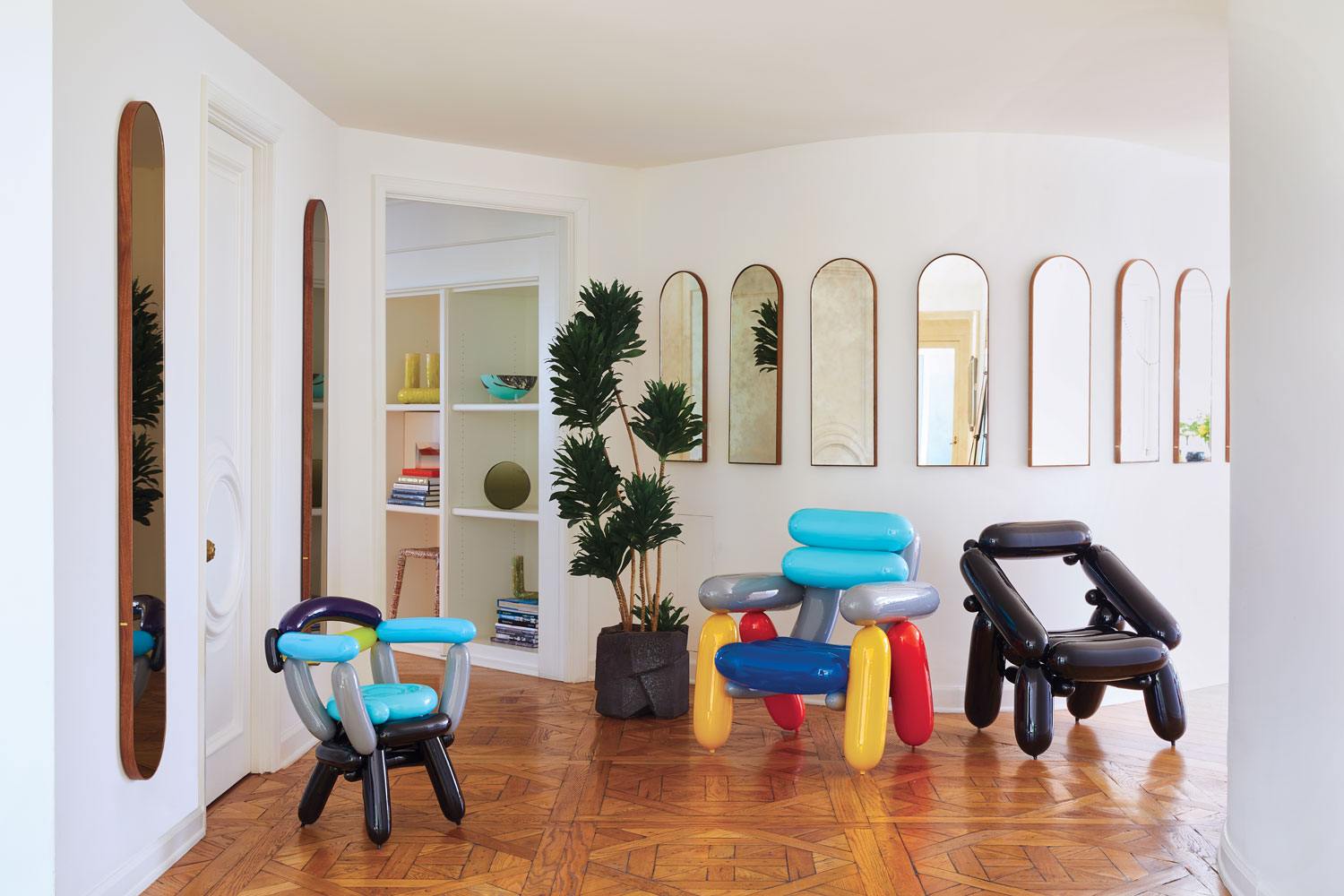 Seungjin Yang’s armchair sculptures displayed in an exhibit with the Future Perfect at Casa Perfect Los Angeles. Photo: COURTESY OF THE FUTURE PERFECT 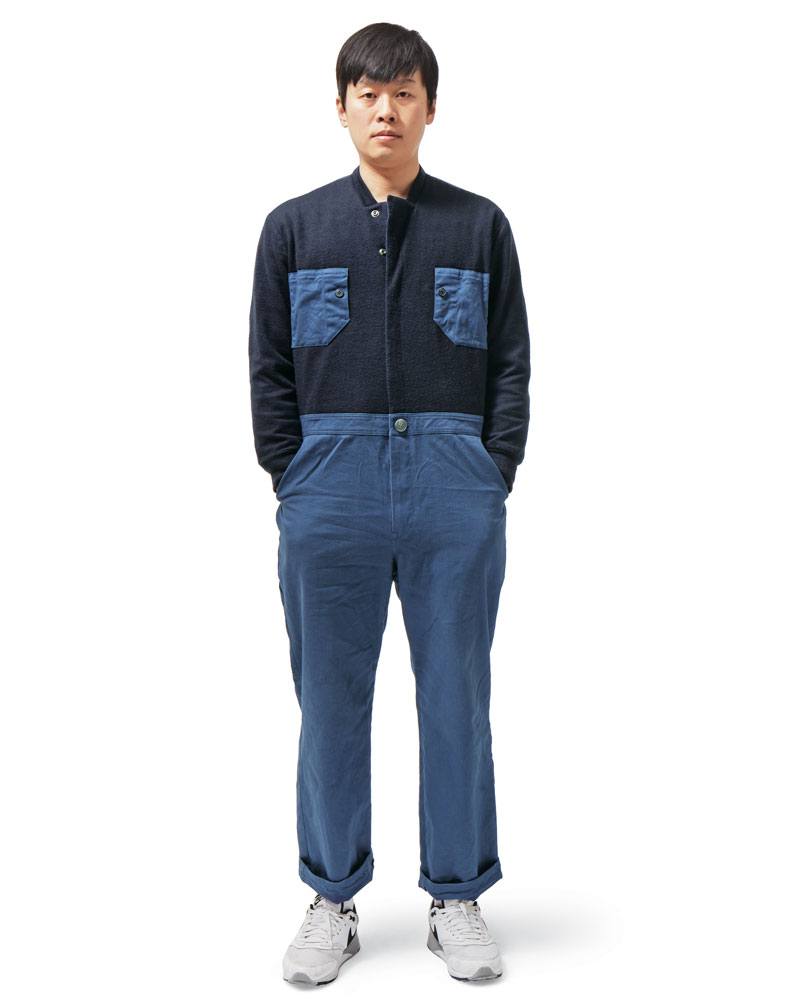 Gazing at the playful shapes and colors of this South Korean designer’s furniture, it’s hard not to smile—the objects draw obvious comparisons to balloon animals. Those creations are fragile, but Seungjin Yang’s seating, which has been shown at the Seoul Museum of Art and the XXl Triennale di Milano, magically is not, thanks to the pieces’ eight layers of epoxy. This methodology is not only unique in the medium but also a departure for Yang, whose first furniture designs were made with welded aluminum. He cites fellow Korean designer Kwangho Lee as his inspiration to “try to do things that others didn’t,” and aims to “become a recognized enough designer to collaborate with Nike.” He adds, “I want to keep doing better work.”

A version of this article first appeared in print in our 2020 Winter issue under the headline “Subject Matters.” Subscribe to the magazine.