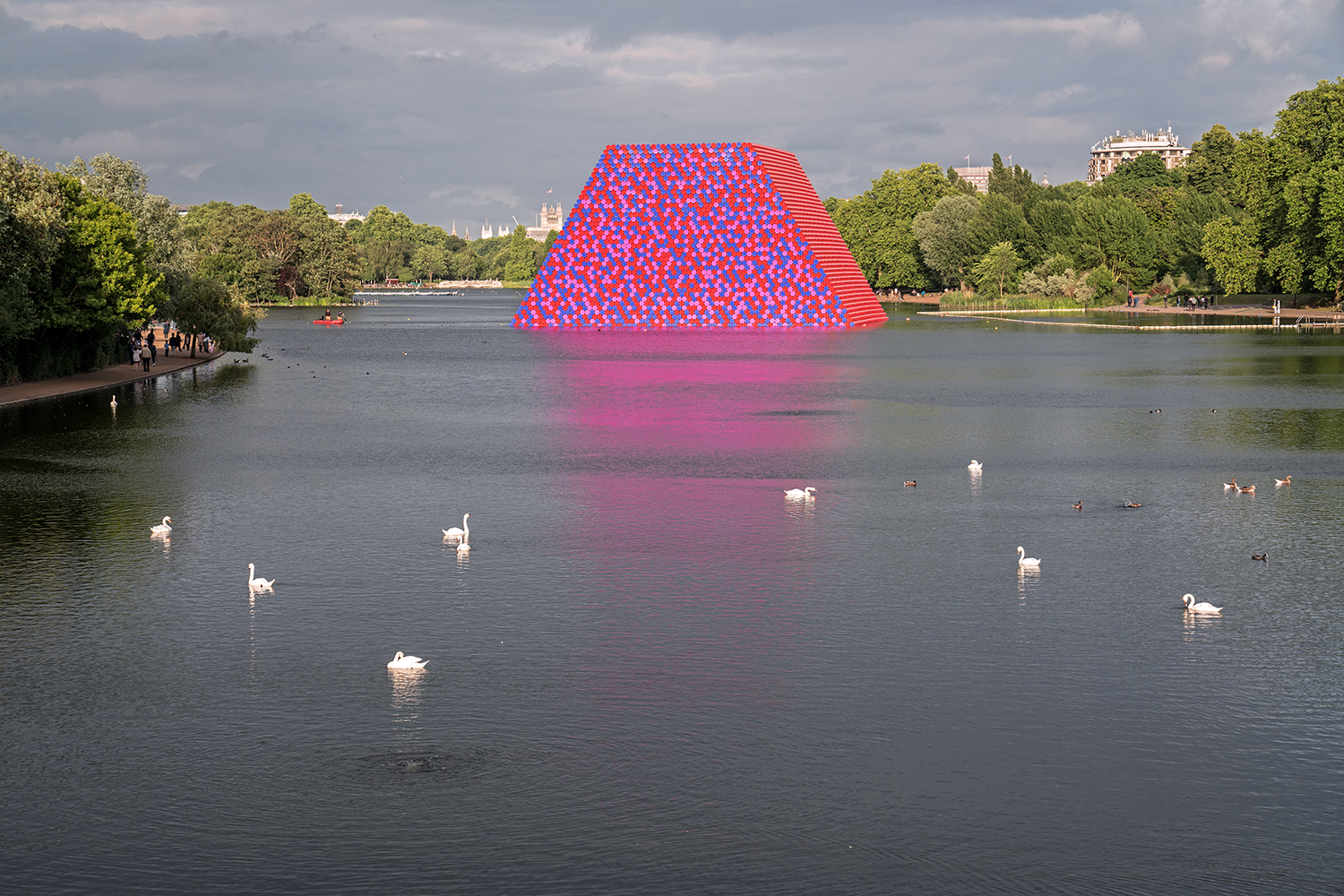 Reflected in the water, the "Mastaba" is intended to have the same appearance as an abstract painting.
Photo: Wolfgang Volz

Starting this week, if you take a stroll in London’s Hyde Park, you’ll bear witness to a surprising sight: a mammoth red, blue, and fuchsia structure dominating Serpentine Lake. Look closer, and you’ll see that the multicolored colossus, a temporary sculpture by the artist Christo called the ‘London Mastaba,’ is composed of thousands of oil barrels.

Christo is known for creating massive public projects, many with his partner Jeanne-Claude, who died in 2009. Their large-scale works first gained traction in the early 1960s. In 1969, they wrapped the coast of Little Bay in Sydney, Australia; in 1985, they wrapped the Pont Neuf in Paris; and in 1995, they wrapped Berlin’s storied Reichstag.

As with most of Christo’s works, the floating Mastaba is an ambitious feat of engineering that raises many questions about how it was created. Here, we take a look at the numbers to see what they reveal. Hyde Park, London. The “Mastaba” is visible in the background. Photo: Wolfgang Volz

7,506: The number of barrels used. Barrels were a favored medium of Christo from his earliest days as an artist, individually and with Jeanne-Claude. He would create sculptures with two or three, or fill a whole room in a gallery with them. This time around, thousands of barrels overlay a colossal steel structure.

660: Weight in tons. The work rests on a floating platform. Nonetheless, that it floats at all seems nothing short of a miracle.

66: Height in feet. Coincidentally, this is also the height of the Great Sphinx of Giza—another mysterious relic of ancient Egypt. 51.5, -0.1: Latitude and longitude of the London Mastaba’s location. Christo was approached by the Serpentine’s artistic director, Hans-Ulrich Obrist, in the wake of his 2016 Floating Piers installation on Lake Iseo in Italy. Obrist claims that the artist selected the lake as the site of the  hulking London Mastaba on a walk through Hyde Park.

32: Number of anchors fixed to the floating base. The base is constructed of high-density polyethylene to support the hulking steel structure.

6: The form for the London Mastaba originated in Ancient Egypt. Christo’s London Mastaba is named for the flat-roofed rectangular tombs of Ancient Egypt after which it takes its approximate shape. The Ancient Egyptian mastaba was used as a tomb for Pharaohs and other noteworthy Egyptians. Egyptologists lifted the term “mastaba” from Arabic—it literally translates to “stone bench.”

5: Number of decades since the project was conceived. The original concept for the floating Mastaba dates back to the 1960s, though the version realized in London has undergone some variations. It is also related to another future project called ‘The Mastaba: A Project for Abu Dhabi,’ which will be a permanent installation in the desert in Abu Dhabi. The “London Mastaba” against the backdrop of its namesake city. Photo: Wolfgang Volz

2.5: Months of construction. As always, Christo was on site with the workers throughout the duration of the installation, along with his nephew, Vladimir Yavachev, who oversees the artist’s outdoor projects.

1: Percentage of the lake’s surface covered by the Mastaba. The base measures approximately 13,000 square feet.

Recommended: The 14 Most Stunning Public Artworks of All Time

.125: Ration of this Mastaba’s size to the larger-scale Mastaba that Christo and Jeanne-Claude envisioned for Abu Dhabi. Christo and Jeanne-Claude originally envisioned a mastaba in the desert of Abu Dhabi eight times the scale of the one in Hyde Park. It’s an undertaking that Christo still hopes to realize, and will call this time for 410,000 multicolored barrels “to form a mosaic of bright, sparkling colors”—a vision inspired by Muslim architecture.

0: Anticipated environmental impact. Despite its size, the Mastaba isn’t expected to have an impact on the ecosystem of the lake. As with all of Christo’s public works, the materials will all be recycled, this time in the U.K.

0: Dollars raised through galleries, government grants, or patrons. The $4 million funding for this project was raised privately by the artist himself, as has always been his practice with Jeanne-Claude. Funds were raised largely through the sale of drawings and maquettes, or small models, of his other large-scale projects. He has good reason for this no-strings-attached way of raising money. Christo, who escaped Stalinist Bulgaria at the age of 21 to become an artist, doesn’t want to relinquish any of the rights to his work. It’s his manner of maintaining true artistic liberty and integrity.

0: Fee to see the work: “Our projects, they’re like our lives,” Christo said in a 2011 interview. “They’re fragile…also they’re free, they cannot be owned…. We’re surrounded in the world, we possess so many things…. Collectors own, museums own, people own…. I cannot charge tickets. It’s there. After a few days, it’s gone.”

Cover: Reflected in the water, the "Mastaba" is intended to have the same appearance as an abstract painting.
Photo: Wolfgang Volz
Next Post