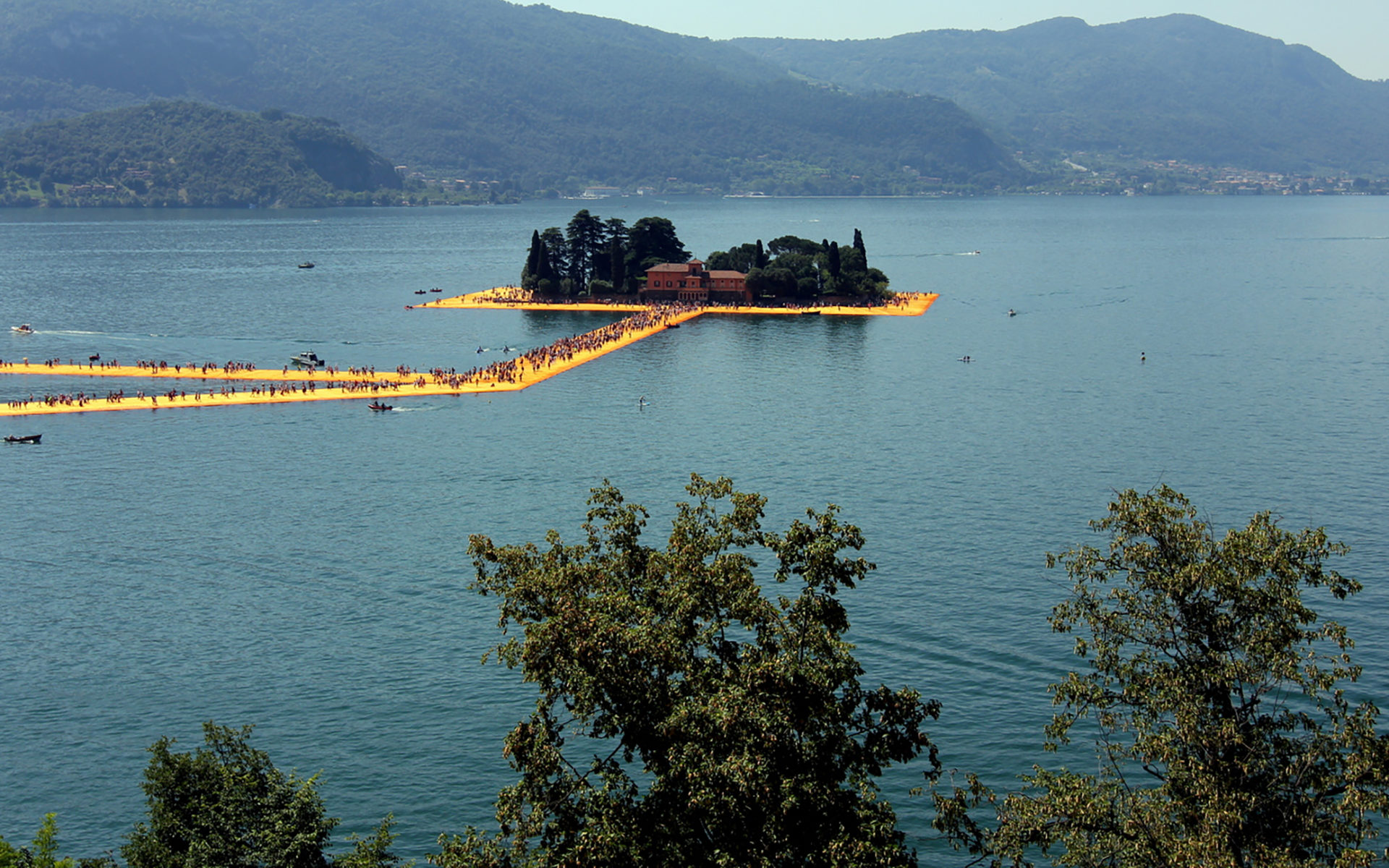 The 14 Most Stunning Public Artworks of All Time

From 1.5 miles of Australian coast shrouded in fabric to a spellbinding piano concert in the Arctic Ocean

The term “public art” may seem to have a straightforward definition: art situated in public spaces—free, accessible, and visible to all those who wish to see it. And while this is, essentially, the core of the genre, the nuances the arise when “public” and “art” are combined bring about a range of questions.  Who is the intended public? Why is this piece placed here, not there? What makes this art?

Such works can take a variety of forms—small, large, painting, sculpture, installation, performance. It can be permanent or temporary. It is often site-specific, created in response to its place—interpreting the history, environment, and people. Being in the public sphere and not in within the controlled space of a museum or gallery means that it often elicits a strong reaction. In fact, the public reaction becomes an intrinsic part of the artwork.

Here are some of the most boundary-pushing public artworks of art in recent years—notable for their spectacular visuals or their political and social meaning. A rugged patch of the Australian coast was clad in one million square feet of erosion-control fabric for Christo and Jeanne-Claude’s Wrapped Coast. Photo: © Christo

For ten weeks beginning in October 1969, one million square feet of Australia’s South Pacific Ocean shoreline was enveloped in erosion-control fabric that extended about 1.5 miles long across the shoreline. It was the vision of environmental sculptors Christo and Jeanne-Claude in their Wrapped Coast project for Kaldor Public Art Projects, who, throughout their careers have made a name for their monumental, often-controversial outdoor pieces.

The Floating Piers, Christo and Jeanne-Claude (2016) The more recent Floating Piers was constructed to make visitors feel as though they were walking on water, with 2 miles of public pathway extending across the water of Lake Iseo in Italy. Composed of 226,000 high-density polyethylene cubes, the saffron-hued walkway cost roughly $17 million to construct. But like all of Christo and Jeanne-Claud’s projects, the Floating Piers was free and open to the public. On the world’s largest and deepest freshwater lake, Lake Baikal in Siberia, American artist Jim Denevan created the world’s largest artwork, spanning nine square miles. The work, a series of circles carved out of the ice in repeated concentric rings, grow from being 18” at the center to several miles in diameter closer to the edges of the nine mile expanse. Known for his breathtaking land art, Deneven has created drawings in sand, ice, and soil. Sometimes his pieces only last a few hours and even begin disappearing as he works. On the evening of October 5, 2013, the celebrated contemporary Chinese artist Cai Guo-Qiang created an explosion event for Nuit Blanche, Paris’s all-night citywide contemporary art event. Titled One Night Stand, the show was divided into three scenes of spectacular fireworks. The first, lasting 12 minutes, was about love. In the second, a boat drifted along the Seine filled with couples from around the world. Agents of the artwork itself, if they wished to share their experience with onlookers, they could pull a trigger and initiate short spurts of fireworks. For the finale, fireworks that spelled “Sorry Gotta Go” appeared, putting an end to this one night stand between Paris and the world. Cai, known for his public spectacles that fill the sky with shimmering, colorful smoke, also created buzz for his 2015 Sky Ladder, a 1,650-foot-tall ladder, held up by a massive balloon and assembled with explosives.

Elegy for the Arctic, Ludovico Einaudi (2016) Off the rugged and unforgiving coast of Svalbard, Norway, Ludovico Einaudi’s floating stage appeared hauntingly minuscule, particularly when juxtaposed with the towering Wahlenbergbreen glacier behind it. And although few members of the public withstood the freezing temperatures for his live piano performance of “Elegy for the Arctic” in 2016, the photos and videos chronicling this forty-hour public spectacle live on with a drama that demands attention for protection of the delicate—and disappearing—ecosystem. Boston’s sky will likely never be as vibrant as it was during the summer of 2015, especially as it was viewed from the city’s Rose Kennedy Greenway. Here, in a void between skyscrapers, was the site of artist Janet Echelman’s dynamic and billowing aerial sculpture, As If It Were Already Here, an installation weighing approximately one ton, but appearing so fluid and airy as if to be weightless. Crafted by hand-splicing rope and knotting twine into an interconnected mesh, when any one element moved, the other would be affected, creating a dynamism reliant on interconnectivity. Such dynamism and interconnectivity folded out onto the city, integrating itself into the vibrant city itself Diminish and Ascend is a veritable stairway to heaven. Photo: Matthew Perkins, Flickr

From the right angle, Diminish and Ascend looks as though it extend infinitely into the sky, a staircase that never ends. The masterful illusion brings to mind a climb up the stairs, to an imagined escape into the heavens. Composed of welded aluminum, the New Zealand-based artist David McCracken’s piece took its stand at the 2013 iteration of Sculpture By the Sea, an outdoor sculpture exhibition held on Sydney’s famed Bondi Beach. McCracken began his career as a sculptor carving driftwood and other found, natural materials. “I like the idea of the sculpture as a sort of slow (stationary) drama,” he says. After a 2014 earthquake rattled the Yunnan Province in China, Hong Kong University architecture professors Olivier Ottevaere and John Lin conceived this dynamic wooden structure on a ridge with sweeping valley views. The structure is distilled into three functions—a stepped seating area for selling fruit and produce, a wooden deck for viewing the valley, and a covered resting and eating area. A visual feat as well as a functional feat, the deck serves as an extension of the scenic landscape, with peaks and valleys that mimic the striking topography. In 2013, street artist JR invited passersby in Times Square to paste their portraits onto the street as a grand public collage. Photo: Courtesy of the artist

French street artist JR’s Inside Out is public art in the complete sense of the word: made for the public, by the public. In Manhattan’s Times Square—the site of the world’s first photo booth a century ago—and other cities around the world, the artist set up a photo truck where visitors could have their portrait taken and instantly be printed onto a giant poster. Following this, visitors could either take the image home or affix it to the ground with wheat paste to form a massive collage. The Infinite Bridge, a circular sculpture measuring 60 feet in diameter and positioned where the beach meets the sea, creates a dialogue between the city and the landscape of the bay of Aarhus, Denmark. A walk around the ring provides an endless panoramic image, where the landscape view changes from one point on the circle to the next. Upon completion of a walk around the circumference, visitors see how the multiple layers of the landscape of Aarhus can merge into one to create a single, spectacular whole. The 60-ton Ocean Atlas sculpture is located near the island of New Providence in the Bahamas. Photo: Courtesy of the artist

In 2015, British sculptor Jason deCaires Taylor revealed the world’s largest underwater sculpture, towering nearly 18 feet tall, showing a girl supporting the ceiling of the water on her shoulders. Located in the Bahamas, Ocean Atlas references the Ancient Greek myth of Titan Atlas holding the heavens. Commissioned by Bahamas Reef Environment Educational Foundation, it is constructed using sustainable and pH-neutral materials and creates a reef for marine life to inhabit, while also drawing tourists away from other overstressed diving areas. With oceans and coral reefs currently facing collapse from numerous threats, the piece symbolizes the burden on future generations to carry and the collective responsibility to prevent its collapse.

From the Knees of My Nose to the Belly of my Toes, Alex Chinneck (2013) In the seaside town of Margate, England, designer Alex Chinneck carefully crafted the façade of a three-story home to slide down, melting into an L-shaped curve. The front door lies practically horizontal in front of the home, and the first rows of windows curve in what would be the intersection of building and ground. As the facade slides, it exposes the top floor of the home, revealing a completely crumbled level. Visually jarring, it stopped passerbys and was impossible to ignore. Conceptually, it begged viewers to acknowledge the illusion and challenge their notion of superficiality. In London’s Covent Garden, French artist Charles Pétillon united over 100,000 balloons with a pulsating light mimicking a heartbeat. Photo: Courtesy of the artist

An ethereal cloud of 100,000 white balloons filled in the space below the pitched roof and arches of London’s historic Covent Garden, floating above the walkways and terraces in an organic form that bended and bulged. Within the inflatable mass, a gently pulsating white light mimicked a heartbeat, marking the Market Building as the beating heart of London. The work was part of a series from artist Charles Pétillon’s “Invasions” series, in which he uses these balloons to fill unexpected spaces—billowing of windows, floating on ponds, and swooshing through basketball hoops. “I want to represent the Market Building as the beating heart of this area—connecting its past with the present day to allow visitors to re-examine its role at the heart of London’s life,” the artist says. Years of studying the web constructions of spiders manifests in Tomás Saraceno’s In Orbit, an installation in Germany’s Kunstsammlung Nordrhein-Westfalen. At a height of 66 feet above the plaza, the bravest visitors can take a stroll across the net construction, appearing as if walking, or floating, in air. Viewed from above, below, or directly across, visitors appeared to be weightless, lacking any sort of relation to gravity. They float amongst planets and molecules, joining in on the very same orbit in space.