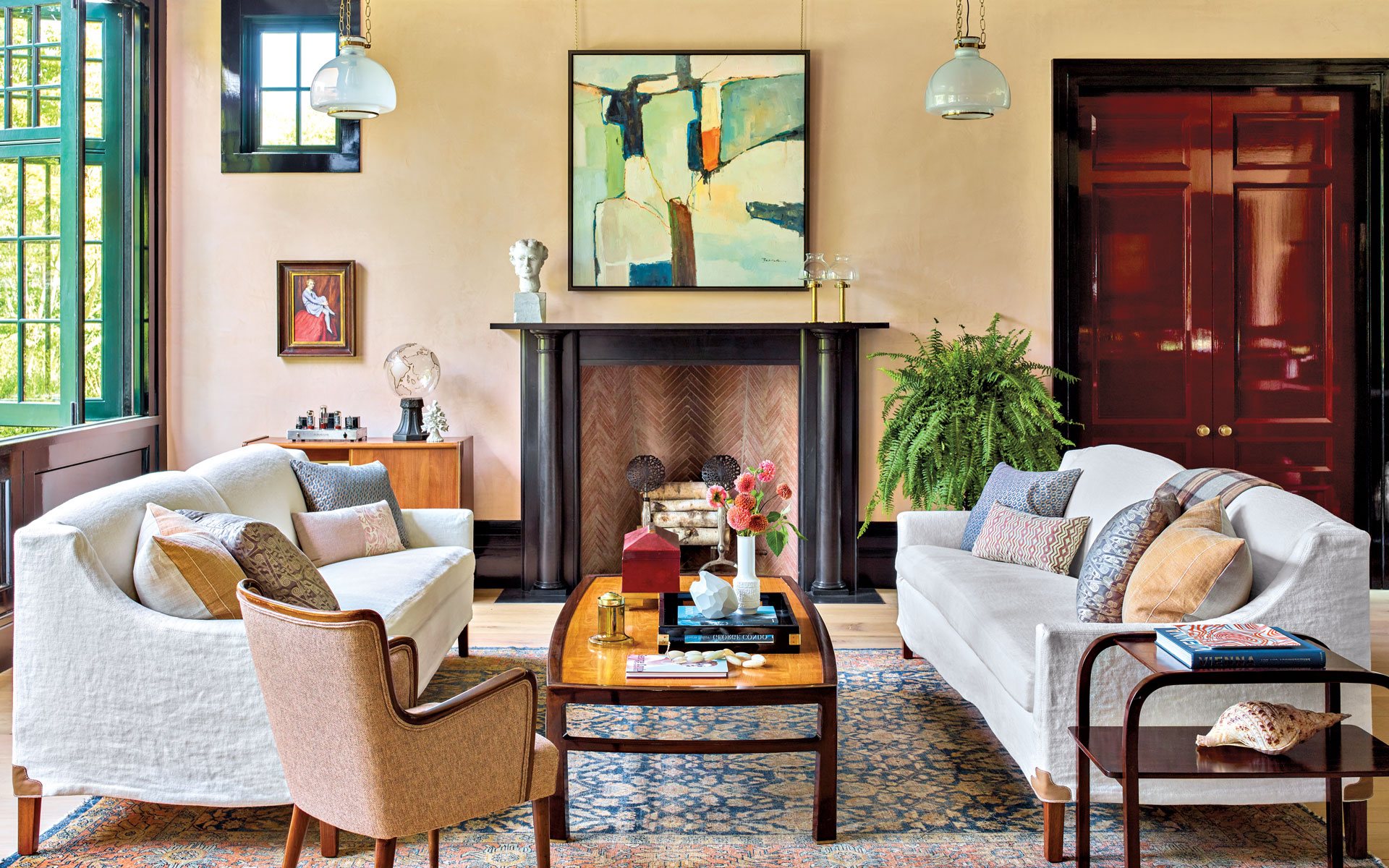 In the living room, whose walls are finished in a peachy-pink plaster, Graybill grouped custom sofas clad in de Le Cuona linen with a vintage Osvaldo Borsani armchair, an Edward Wormley cocktail table, and a Vienna Secession side table. The pendants are by Roman and Williams Guild, and fireplace is by Jamb.
Photo: ERIC PIASECKI. STYLED BY HELEN CROWTHER

Anyone fortunate enough to own a retreat with spare bedrooms in the Hamptons is surely familiar with the dilemma, particularly acute on summer weekends: to host or not to host? The challenge is knowing how to entertain guests with conviviality while preserving the beachside tranquility cherished by hard-charging New Yorkers seeking to decompress.

Bryan Graybill, a Hamptons-based interior designer, was all too aware of the pleasures and perils of hospitality. The Georgia native used to joke with his husband, attorney Daniel Dokos, that they ran a hotel in their previous East Hampton home, where friends routinely decamped. “We love having guests, but we don’t like to see them before cocktail hour,” Graybill says with a laugh. 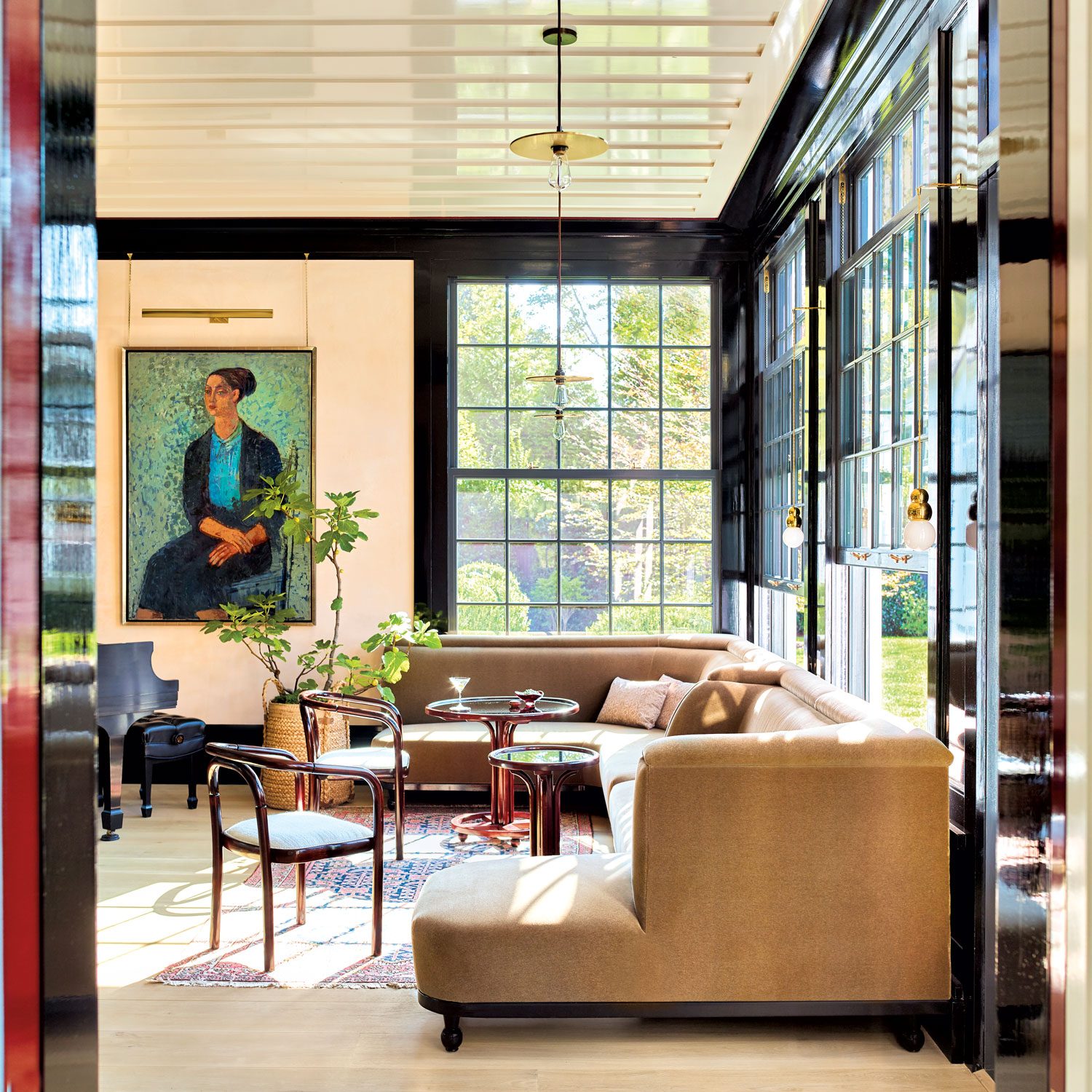 Vienna Secession café tables and Poul Henningsen chairs join a custom-made banquette in the drawing room of designer Bryan Graybill and attorney Daniel Dokos’s East Hampton home, which they built with the architectural firm Historical Concepts; Michael Anastassiades sconces are mounted between the windows, and the portrait was painted by Paulus Franciscus Kromjong. Photo: ERIC PIASECKI. STYLED BY HELEN CROWTHER

After acquiring a nearby property several years ago, they flirted with the idea of renovating the 1950s dwelling on the site—which measures just under an acre—but ultimately decided it had to go. “It was bad midcentury,” Graybill recalls. “Cinderblock, asbestos, and nautical stuff.” Instead, the designer set out to craft a new home with an old soul, inspired by a cluster of charming 18th-century buildings, like the 1770 House and Huntting Inn, just down the street in the village of East Hampton.

“I wanted to have lots of intimate moments for drinking, visiting, and reading a book”

Graybill found the ideal collaborator in Andrew Cogar of Historical Concepts, an architectural firm renowned for its classical approach, whether for renovations or new construction. “We research what makes the architecture of a place great, embracing all of the regional influences,” Cogar says. Together they conceived what Graybill dubbed the Dowager Inn, a seven-bedroom clapboard residence with mismatching windows suggesting an evolution over generations while projecting a modern sensibility. “There’s a fine line between creating authenticity and being locked into a period piece,” says Cogar. “It’s a balancing act.” 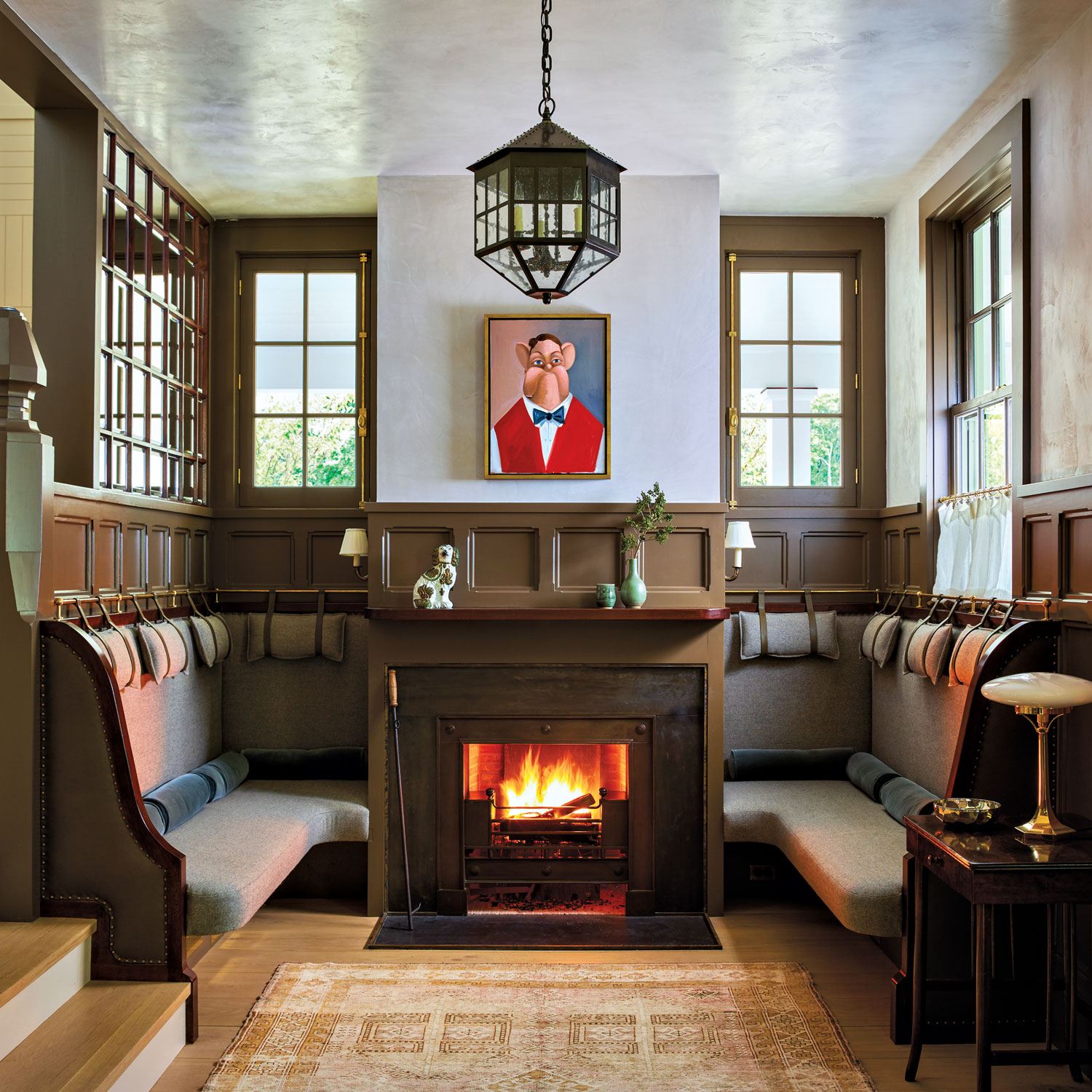 A wing for the couple holds a master suite, sleeping porch, parlor, office, and dressing room—all of which can be closed off with sliding doors when they desire privacy and opened up when the party starts. “My husband and I like the idea of an apartment within the house where we can feel cozy when it’s just the two of us,” says Graybill, “or escape to when we have a houseful of people.”

The evocative interiors were influenced by 19th-century English Arts and Crafts and the turn-of-the-century Vienna Secession movement. “Both were reactions to overly ornamental, fussy designs and tied right in with Colonial architecture,” says Graybill, who became intimately knowledgeable about British style and refined his hospitality design skills while working for the late London-based decorator David Collins from 2008 to 2013. 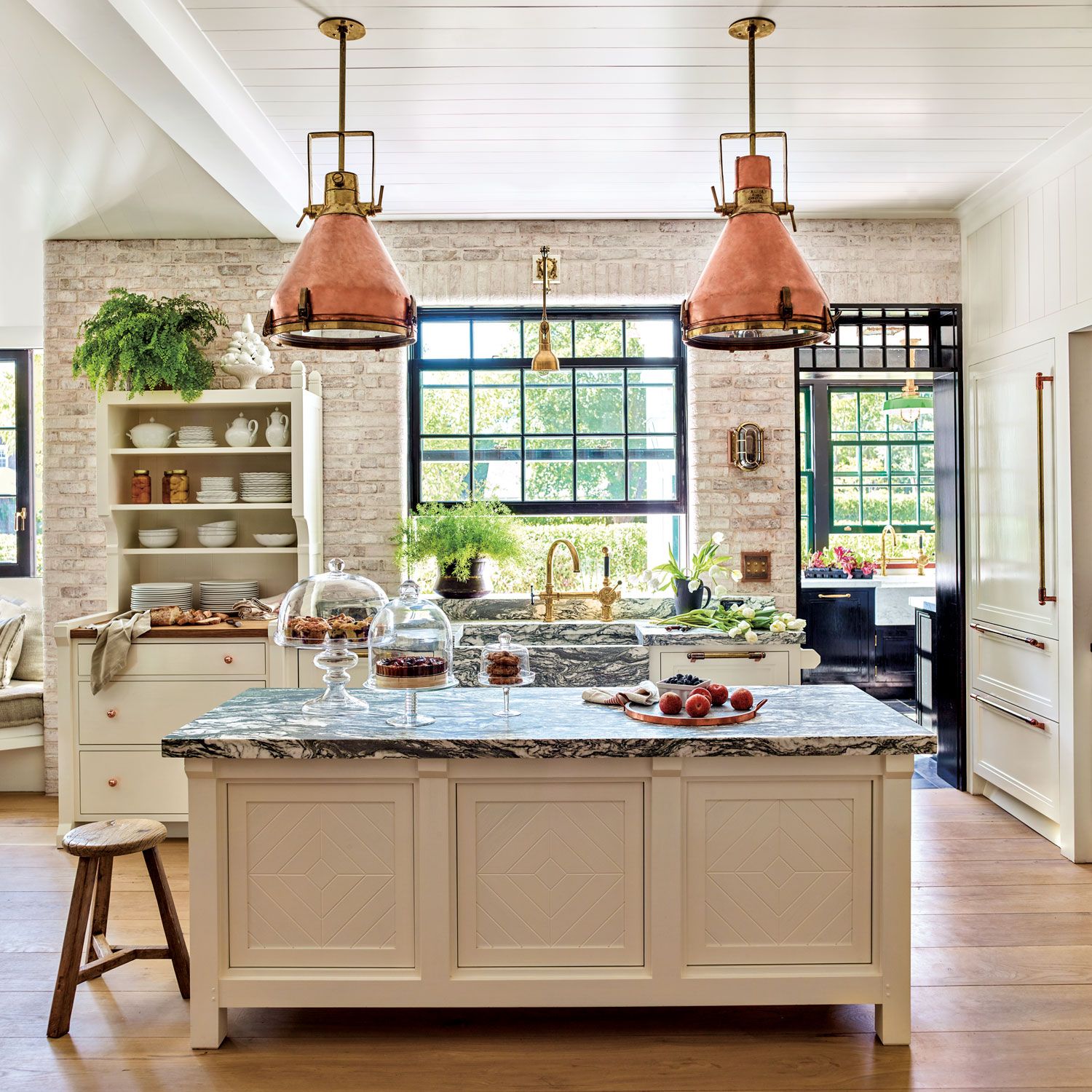 In the kitchen, which Graybill dubbed the Orangerie, copper lights sourced from the Brimfield flea market are installed above a bronze-top island crafted by Timeless Homes; the built-in refrigerator is by Sub-Zero, and the sink fixtures are by Waterworks. Photo: ERIC PIASECKI. STYLED BY HELEN CROWTHER

The entry hall at Dowager Inn sets a stylized period mood. Visitors are greeted by a George Condo portrait of a butcher overlooking a Viennese-inspired built-in bench that Graybill designed to wrap around the fireplace. It’s an inviting spot to kick off both sandy footwear and weekend festivities. Graybill admits to an obsession with banquettes and built-in furniture, a mainstay of 19th- and early-20th-century European interiors. A jigsaw puzzle sofa spans three walls of the parlor and another embraces a substantial corner of the drawing room, while comfy benches beckon in the breakfast area, the library, and the couple’s pink-hued dressing room. “I wanted to have lots of intimate moments for drinking, visiting, and reading a book,” the designer says.

A storyteller at heart, Graybill threaded the welcoming theme of the Dowager Inn throughout, from providing individual keys for the guest bedrooms to the warm, cafélike ambience of the living room, whose peach-color walls match the shade found in his childhood home. Vintage Viennese, Danish, and Italian pieces mix elegantly with custom Graybill designs beneath the room’s high-gloss ceiling, while a piano and a very British marble-top mahogany bar complete the vibe. “It was important to have a proper place for people to have cocktails,” he admits. “I’m a decent cook, but I get nervous having people congregate in the kitchen.” 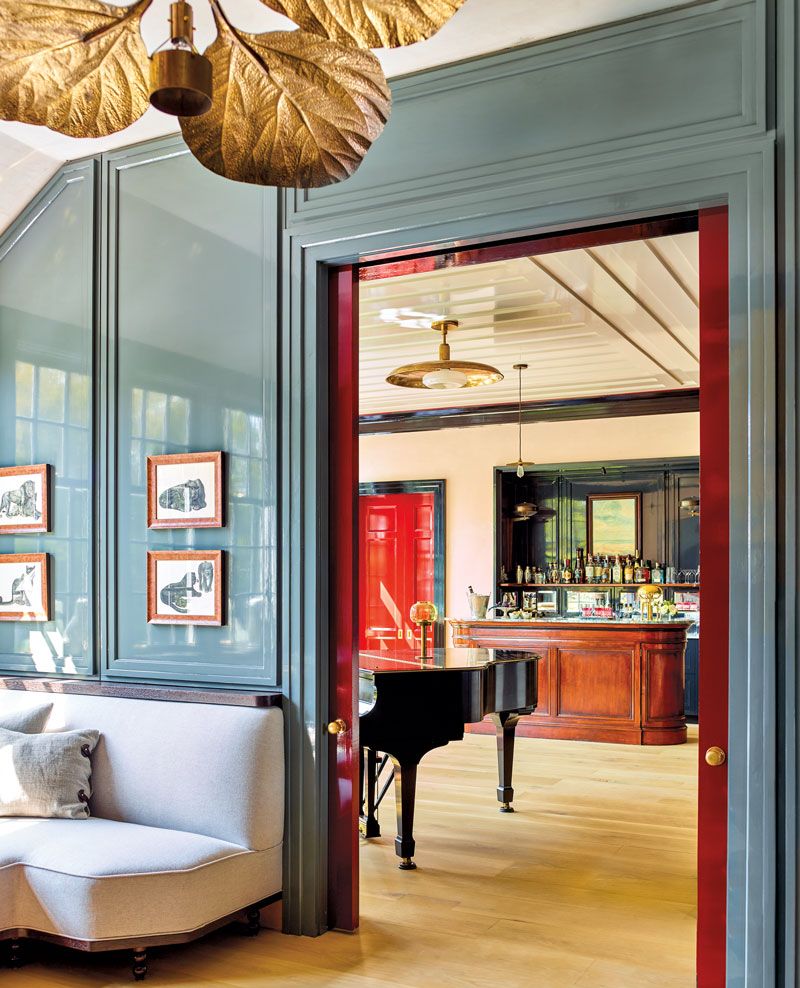 The parlor walls, lacquered in a Fine Paints of Europe custom color, provide a glossy backdrop for artworks by Georges-Lucien Guyot and a Thomas Lavin sofa beneath a Tommaso Barbi leaf chandelier. Photo: ERIC PIASECKI. STYLED BY HELEN CROWTHER 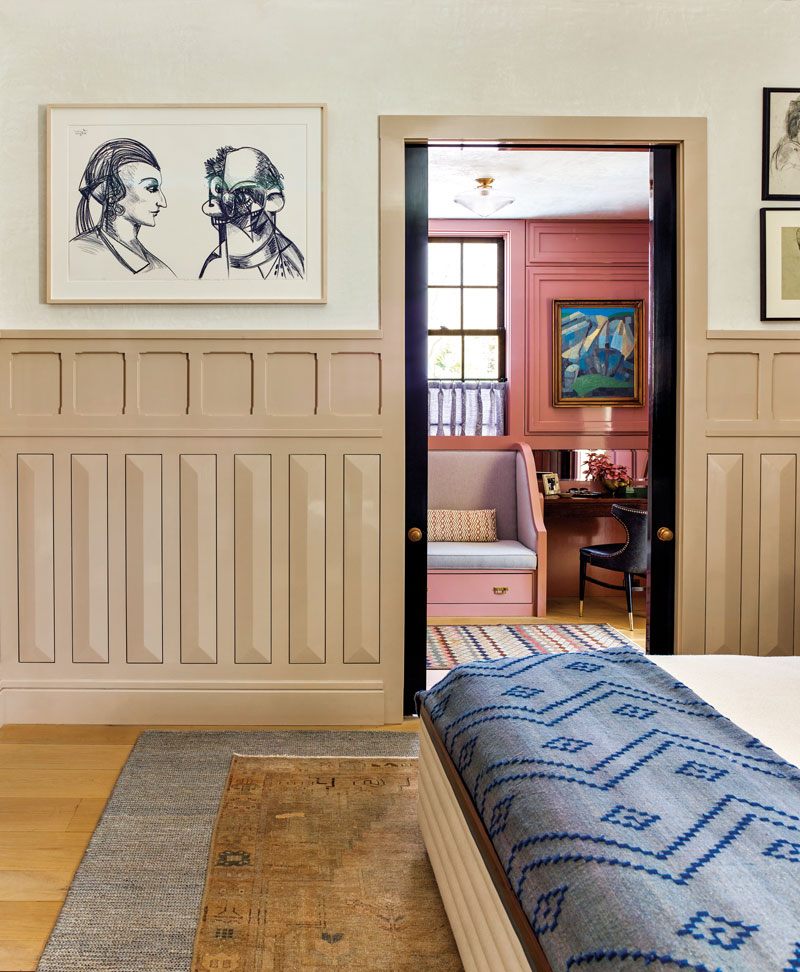 A work by George Condo hangs next to the doorway leading to the master suite’s dressing room, which is painted in Sierra, a pink by Fine Paints of Europe. Photo: ERIC PIASECKI. STYLED BY HELEN CROWTHER

The outdoor spaces are equally distinctive. A gracious porch, kitted out with black wicker furniture, offers restful views of the swimming pool, whose poolhouse—inspired by East Hampton’s original schoolhouse, a preserved landmark down the street—doubles as a bar in the summertime. “My mother is a great hostess, and she loves having big parties,” Graybill says. “My brother and I grew up learning how to bartend before we learned how to drive.” 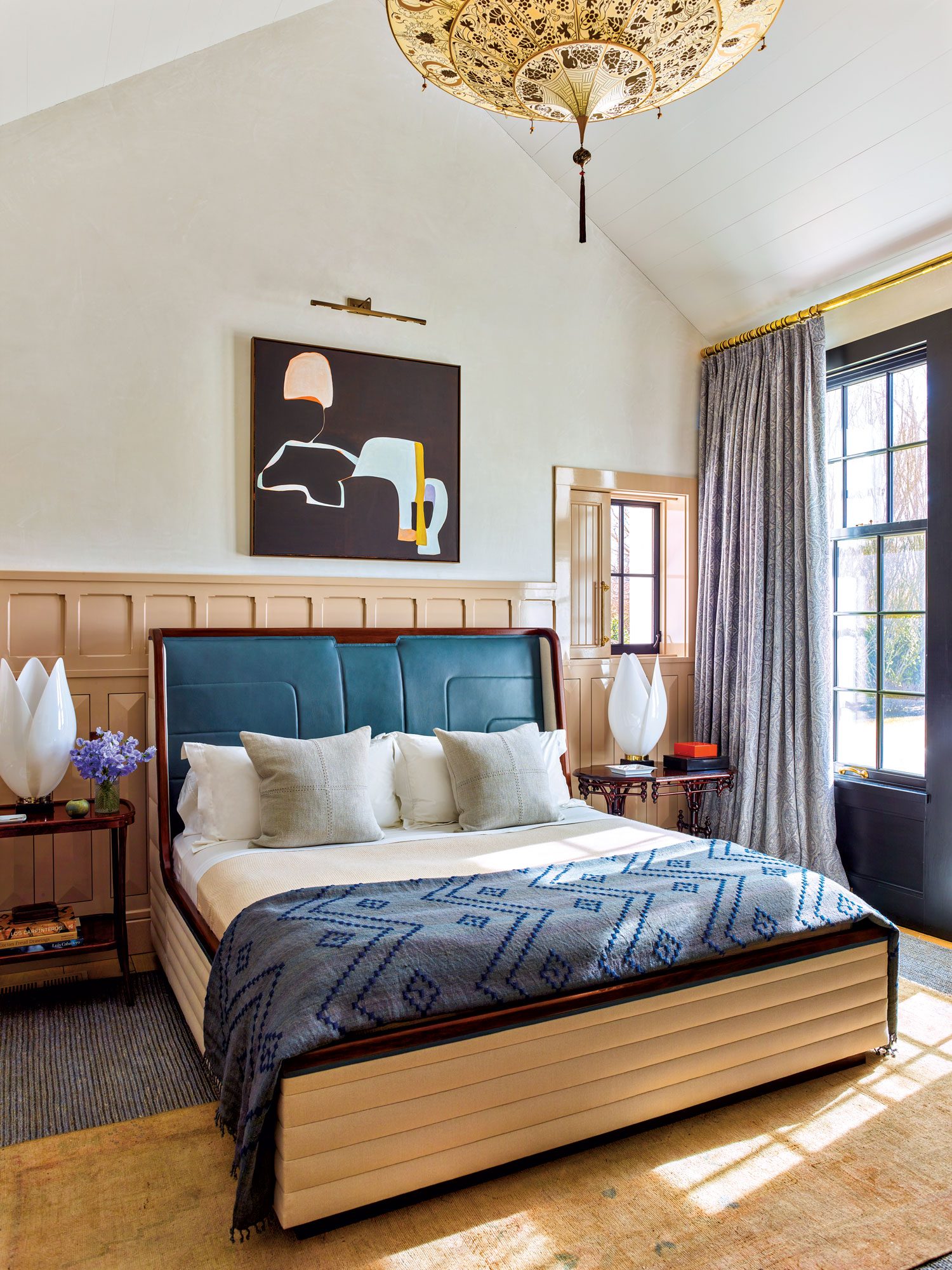 A work by Janet Liebowitz hangs in the master bedroom, where vintage lamps by Roger Rougier flank the custom bed by Graybill; the pillows and curtains are by de Le Cuona. Photo: ERIC PIASECKI. STYLED BY HELEN CROWTHER

Resplendent with boxwoods and rhododendron, gardenias and creeping jasmine, the gardens, created by Hooten Land Design, look deceptively expansive—much like the home itself, with its multitude of appealingly idiosyncratic spaces. “I wanted the house to feel like it rambles and flows, to have this fluidity over time,” Graybill says, “as if it existed prior to us and could carry on past us.”

A version of this article first appeared in print in our 2020 Summer issue under the headline “Playing with the Past.” Subscribe to the magazine.

Cover: In the living room, whose walls are finished in a peachy-pink plaster, Graybill grouped custom sofas clad in de Le Cuona linen with a vintage Osvaldo Borsani armchair, an Edward Wormley cocktail table, and a Vienna Secession side table. The pendants are by Roman and Williams Guild, and fireplace is by Jamb.
Photo: ERIC PIASECKI. STYLED BY HELEN CROWTHER
Next Post