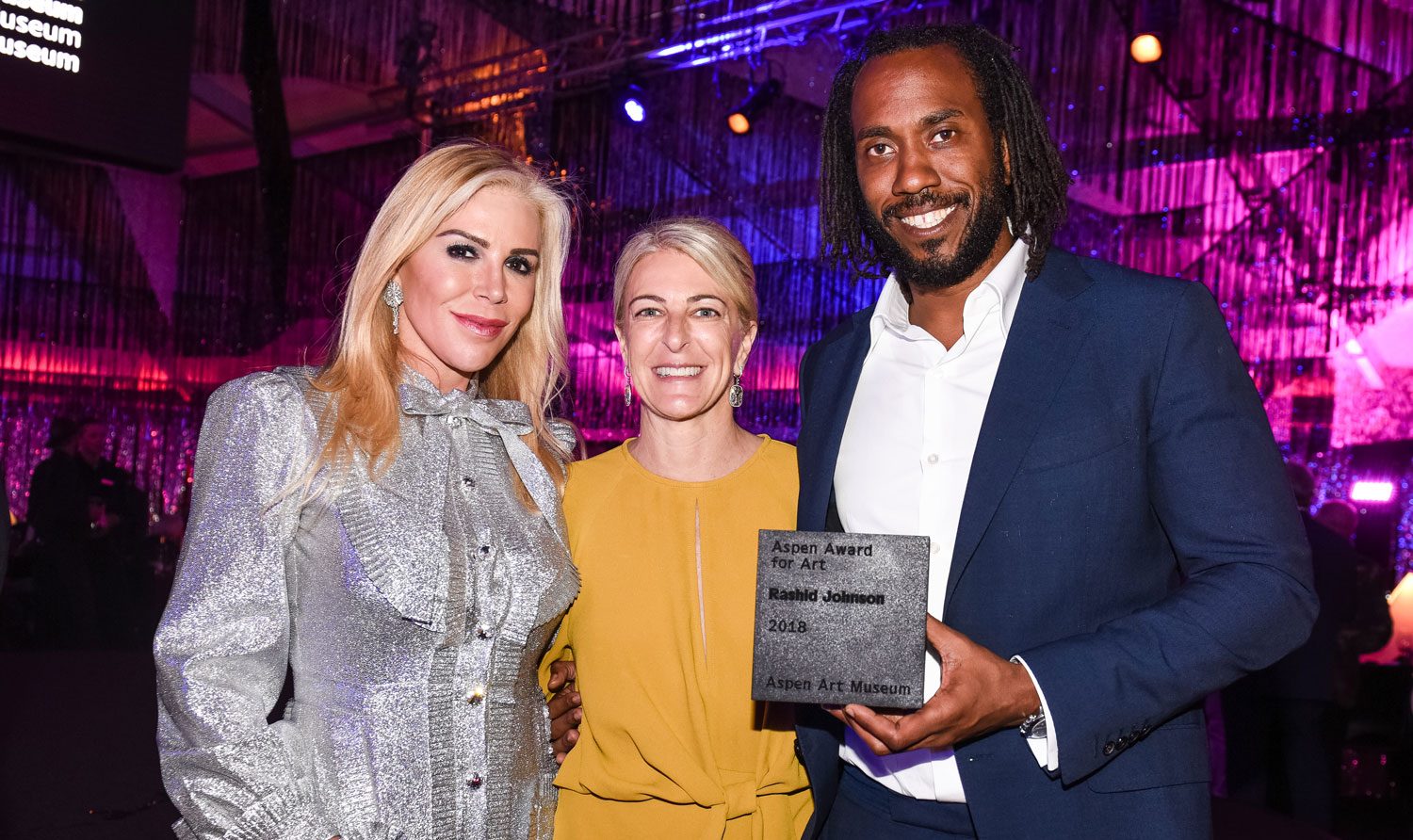 “I should probably quit,” Johnson told Galerie last week not long after coming down from Aspen Mountain, hardly sounding winded. The brisk, three-hour hike with him and a few close friends of the Aspen Art Museum (including artists Richard Phillips, Tara Lewis, Gabriel Rico, Barnaby Furnas, and Ben Durham, as well as New York architect duo Stonefox) was the early-bird, VIP kickoff to the museum’s summertime fundraising spree of festivities, which culminates annually with the ArtCrush gala. The night of the event, Aspen’s population swells with visiting art word luminaries from around the country: curators and directors from The Hammer, MCA Chicago, the Whitney Museum, and The Bass; gallerists Marianne Boesky, David Kordansky, and Hauser & Wirth senior directors Cristopher Canizares and Graham Steele; and a spate of high-profile collectors. Over the next three days, everyone got a little light-headed—in part because of the altitude, in part because of the copious glasses of wine and champagne being served.

Day one concluded with the wine-pairing feast WineCrush at the home of mega-collectors John and Amy Phelan—he is the copresident of the museum’s board of trustees and she the ArtCrush chair (as well as a former Dallas Cowboys cheerleader). The party started with champagne and hors d’oeuvres inside the Phelan’s expansive home, where the walls are lined with works by Jenny Holzer and Ellsworth Kelly, and Todd Knopke’s “Closet,” a miniature bookshelf door that opens to a revolving disco ball inside a tiny closet. In the living room, an installation by artist Walead Beshty consisted of a mirrored floor that cracked underfoot when guests walked on it. The theme was Greenhouse Apothecary—”a play on legalization,” Zuckerman clarified—with an accompanying dress code of green, or flora, or clear. The Haas brothers, whose smashing show at Boesky West (Marianne Boesky’s Aspen gallery) was celebrated that week with a doughnuts-and-coffee reception, did it best: Nikolai wore a pastel green suit with a floral shirt, and Simon was om a transparent PVC raincoat. “Who made your jacket?” an L.A.-based collector asked. The designer shrugged. He had bought it on Etsy.

Recommended: The Parrish Gala Lights Up in Honor of Chad Leat and Keith Sonnier

The night concluded with a tented dinner in the backyard, where each place setting was crowned with six wineglasses. Master sommelier Jay Fletcher promised we’d go through at least “two casks” of a rare French vintage. He was not wrong. On Thursday, Johnson, in conversation with Zuckerman, expounded on the solo exhibition of new works he would be opening concurrently at the Aspen Art Museum and Mexico City’s Museo Tamayo next July. During the next year as the museum’s Gabriela and Ramiro Garza Distinguished Artist in Residence, he’ll be integrating choreography in his work and filming dance performances in the landscape across four seasons. “Artists as a whole are deeply affected by place,” Johnson said. The first time he had come to Colorado, at age 16, “I opened my eyes in the morning surrounded by these mountains, and it was awe-inspiring.” And suddenly it was Friday, the finale. Guests rolled up to the ArtCrush tent erected at Buttermilk ski in various luxury Audis and enormous SUVs, largely dressed in silver clothing, the prevailing answer to the gala’s theme: a Johnson-inspired Cosmic Utopia, manifested in Stonefox’s decor as mylar curtains and glowing pyramids. Zuckerman presented Johnson with his award, and over dinner, Sotheby’s auctioneer extraordinaire Oliver Barker led a live auction that peaked with a fierce bidding war over Johnson’s 8-by-10-foot Untitled Escape Collage (2018), a work comprising ceramic tiles, mirrors, animal skins, and his signature element, black soap. The work was valued at $285,000, a price that quickly doubled after an explosion of bids from around the room. When bidding reached $700,000, the crowd marked the moment with gasps. Ultimately, the bidding slowed to a volley of canons between the final two bidders.

“I’ll let her borrow it for a weekend,” said L.A.-based venture capitalist Troy Carter, one of the last two bidders vying for the work.

“Well, you’ve got to end up with it first,” said Barker.

Around the $725,000-mark, the two final bidders crossed the room to give each other a hug. Carter secured the piece with $730,000, and the audience went wild. A small mob surrounded him with an outpouring of pats on the back and congratulations. The museum had surpassed its fundraising goal of $2.5 million that night and spirits were high—everyone felt like a winner.