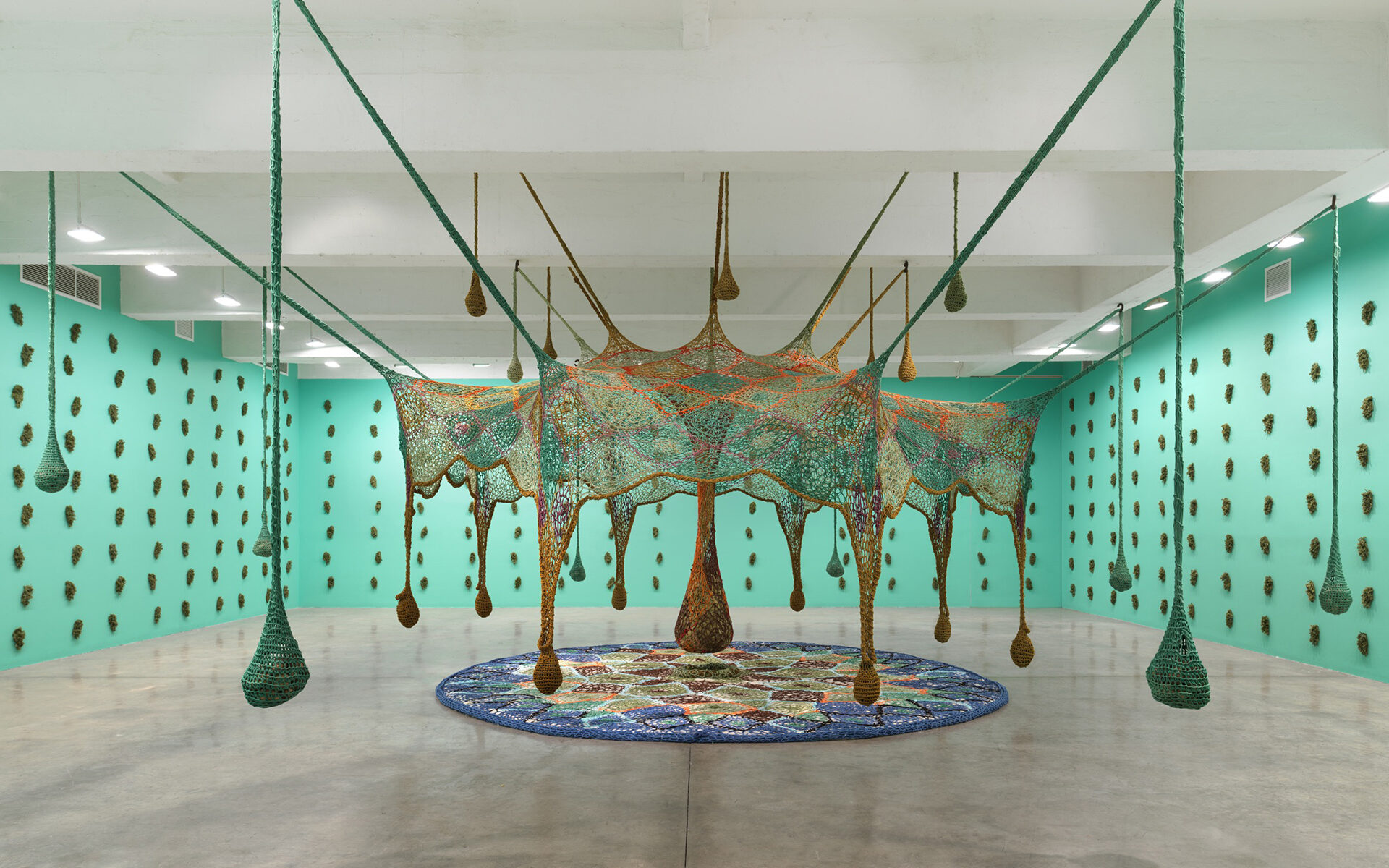 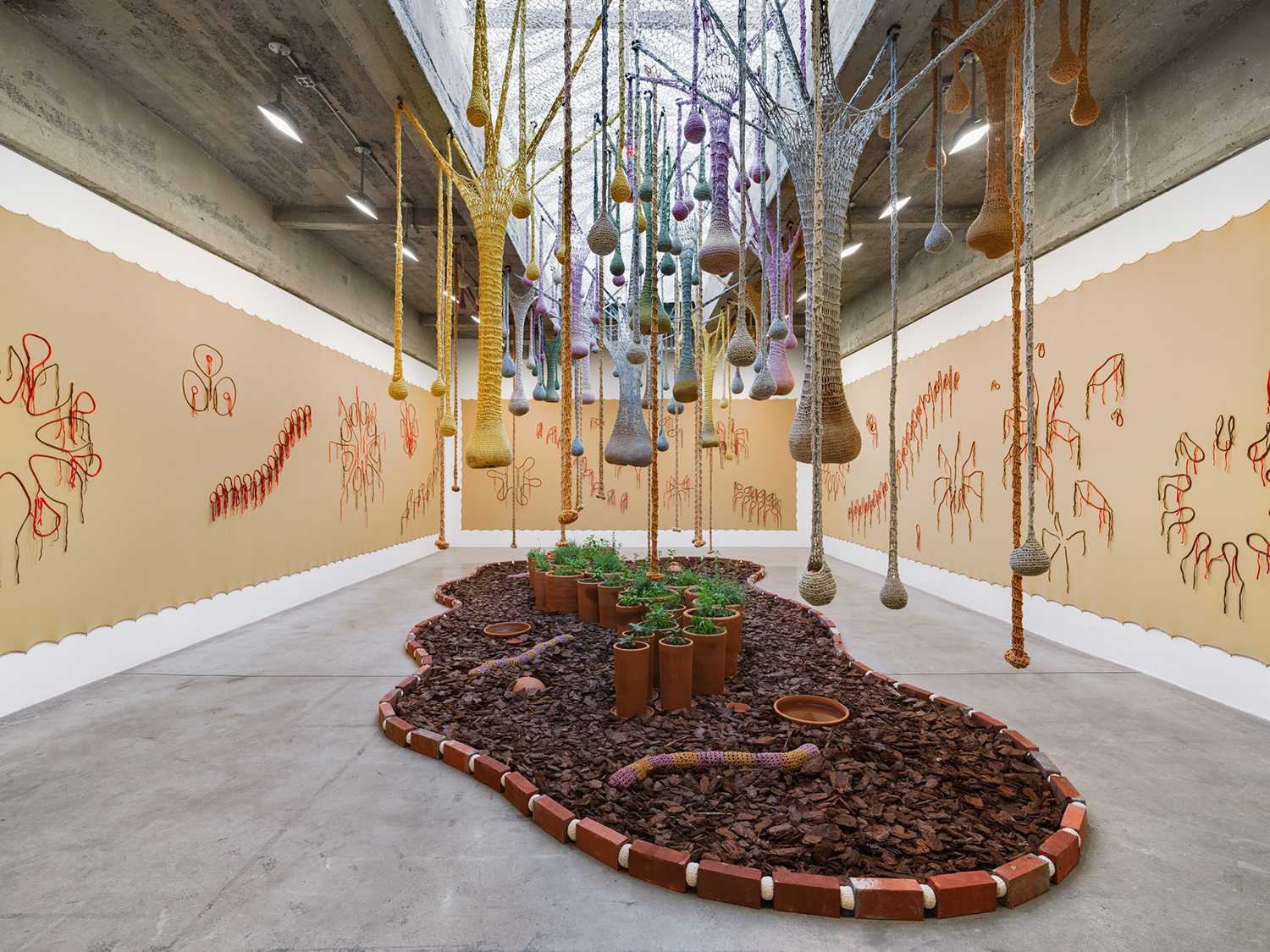 Known for his trippy immersive installations that explore the relationship between humans and nature, Brazilian artist Ernesto Neto has just opened a new show at Tanya Bonakdar Gallery in Manhattan. On view through June 16, “Between Earth and Sky” features Neto’s signature dripping forms and use of natural materials, such as colorful cotton weavings festooned on the walls and hanging from the ceiling. On both levels of the Chelsea gallery the artist has conceived a pair of installations that challenge visitors to interrogate their impact on the planet, even creating a crocheted garden—complete with soil and live plants—that is meant to foster a greater understanding of the dynamic between people and their environment. —Geoffrey Montes

Haitian-born fashion designer Victor Glemaud channels his roots with his launch of spirited fabric and wall coverings for Schumacher. The first home collection from the sartorial talent known for his namesake label specializing in soigné knitwear includes 14 patterns including bold ’70s-inspired graphics, botanical prints, and even a toile homage to Touissant Louverture, his native country’s liberator. “Color and texture are pillars within the DNA of my brand,” he says of the collection entitled Cut-De-Sac, “and it’s my hope to bring a sense of joyfulness to all that experience the range.” And that joyfulness comes quite easily when admiring the landscapes, stripes, and florals this visionary has imagined.” —Jacqueline Terrebonne 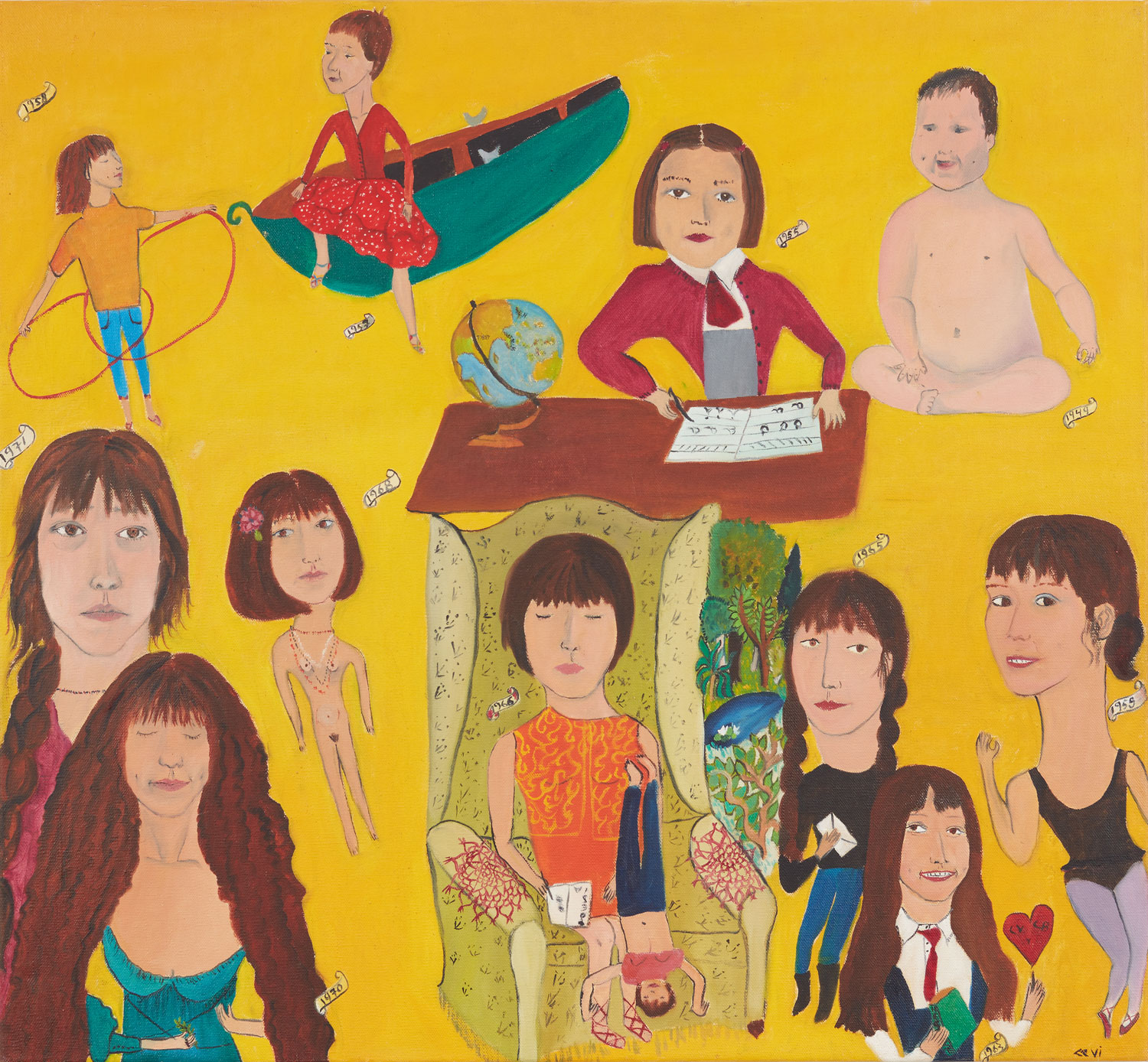 Pioneering Latin American artist, poet, activist, and filmmaker Cecilia Vicuña’s first solo exhibition in a New York museum opens this week at the Solomon R. Guggenheim Museum. “Cecilia Vicuña: Spin Spin Triangulene” showcases the wide breadth of the contemporary Chilean artist’s work, including paintings, works on paper, textiles, and films spanning from the late 1960s to today. Notably, the showstopper of a retrospective will be the premiere of Vicuña’s site-specific Quipu installation, Quipu, Quipu del exterminio / Extermination Quipu (2022). Drawing on the ancient Inca record-keeping devices, “quipus,” that implemented knotted cords as a form of communication, Vicuña’s large-scale wool installations create a new form of language and storytelling. A onetime performance of a “living” Quipu will be staged at the museum, engaging a participatory collective healing ceremony for the earth. —Stefanie Li 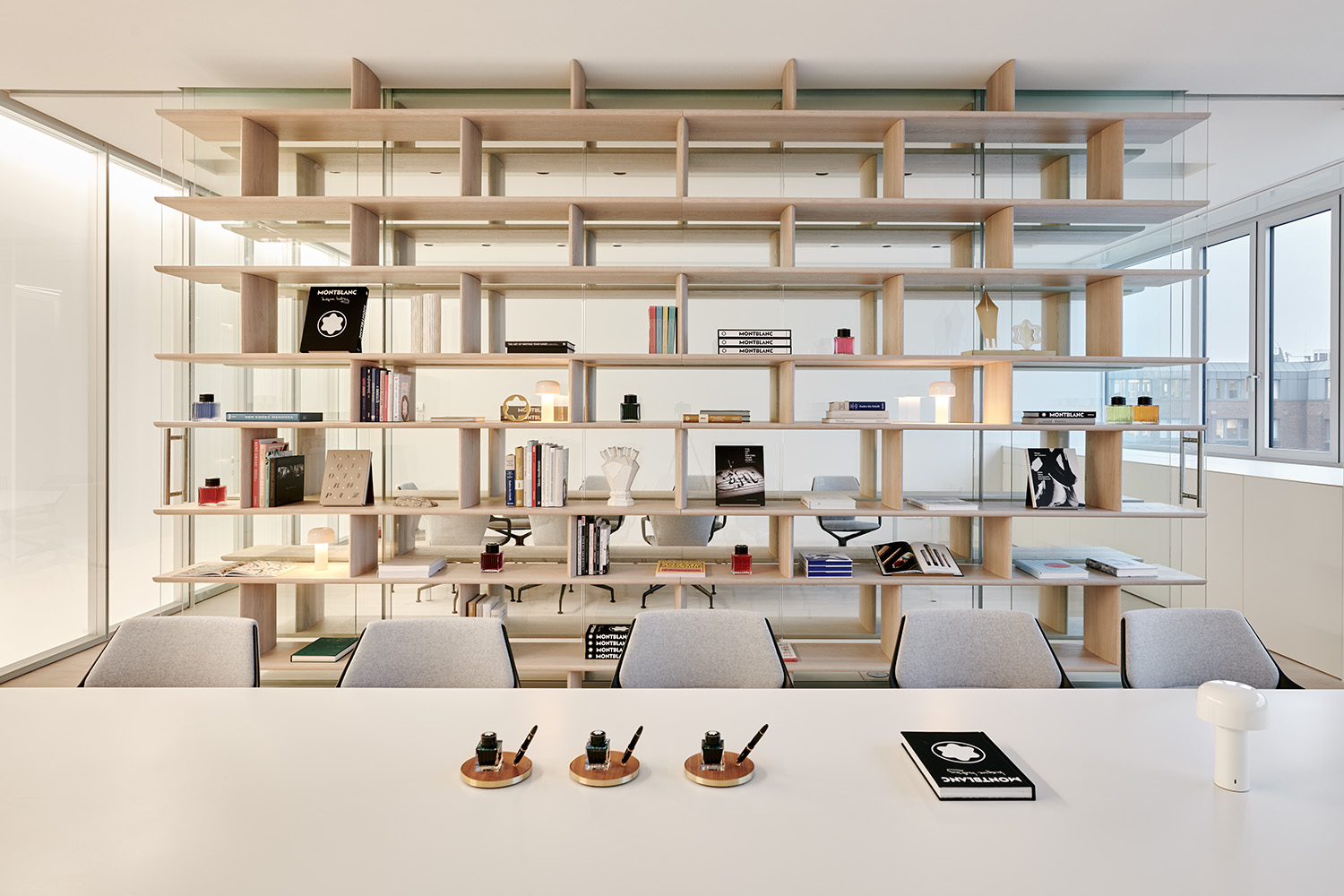 As a brand that has perfected the art of handwriting, Montblanc is introducing an inspirational destination for devotees of its stellar writing instruments. Montblanc Haus, located right next to the company’s headquarters in Hamburg, Germany, is a three-level permanent residence that offers a wide range of immersive experiences in honor of Montblanc’s rich history and renowned products. While enjoying a rare glimpse into creations from the company’s archive, as well as a carefully curated exhibition which highlight’s the importance and power of the pen, guests will be able to test out company products personally by writing postcards that can be sent across the globe. Additionally, Montblanc Haus’s Writing Atelier will offer classes in calligraphy and creative writing for visitors of all ages, as well as special opportunities for disadvantaged children and adults who want to express themselves in a creative way. Now open for visits, Montblanc’s dreamy new space is the go-to destination for the next great scribe. —Shelby Black 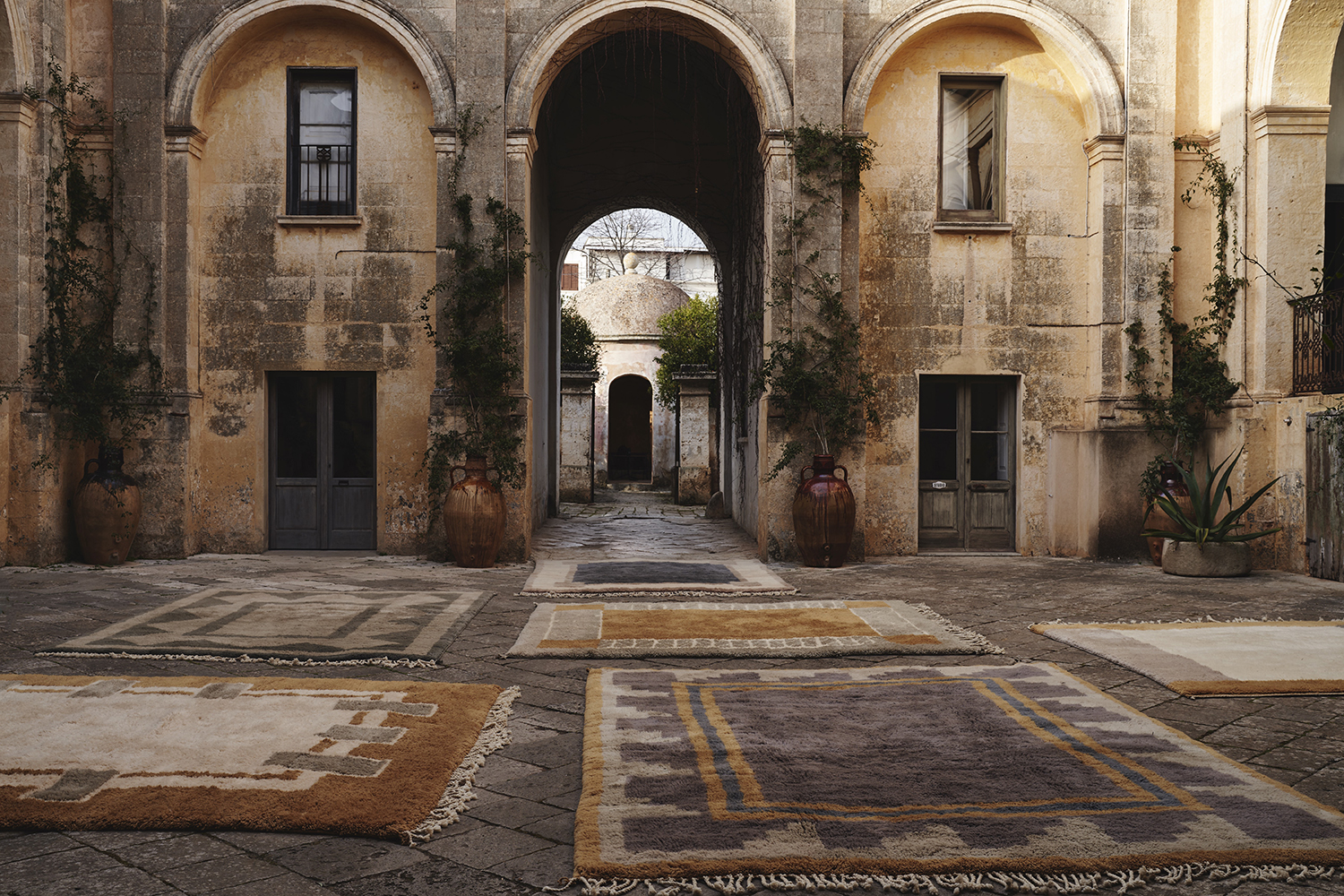 New York designer Colin King is celebrated for his quietly elegant spaces that utilize minimalist arrangements of neutral-colored elements to maximum effect. On May 25, King debuts an array with Beni Rugs called Spoken Lines, which draws influence from Milan, including its famous mosaics and the architecture of Piero Portaluppi. The first of three collections produced with the Morocco-based rug maker, the styles are hand-woven by a team of female weavers in a color palette drawn from the facades of the Italian city’s beautiful apartment buildings. —Jill Sieracki 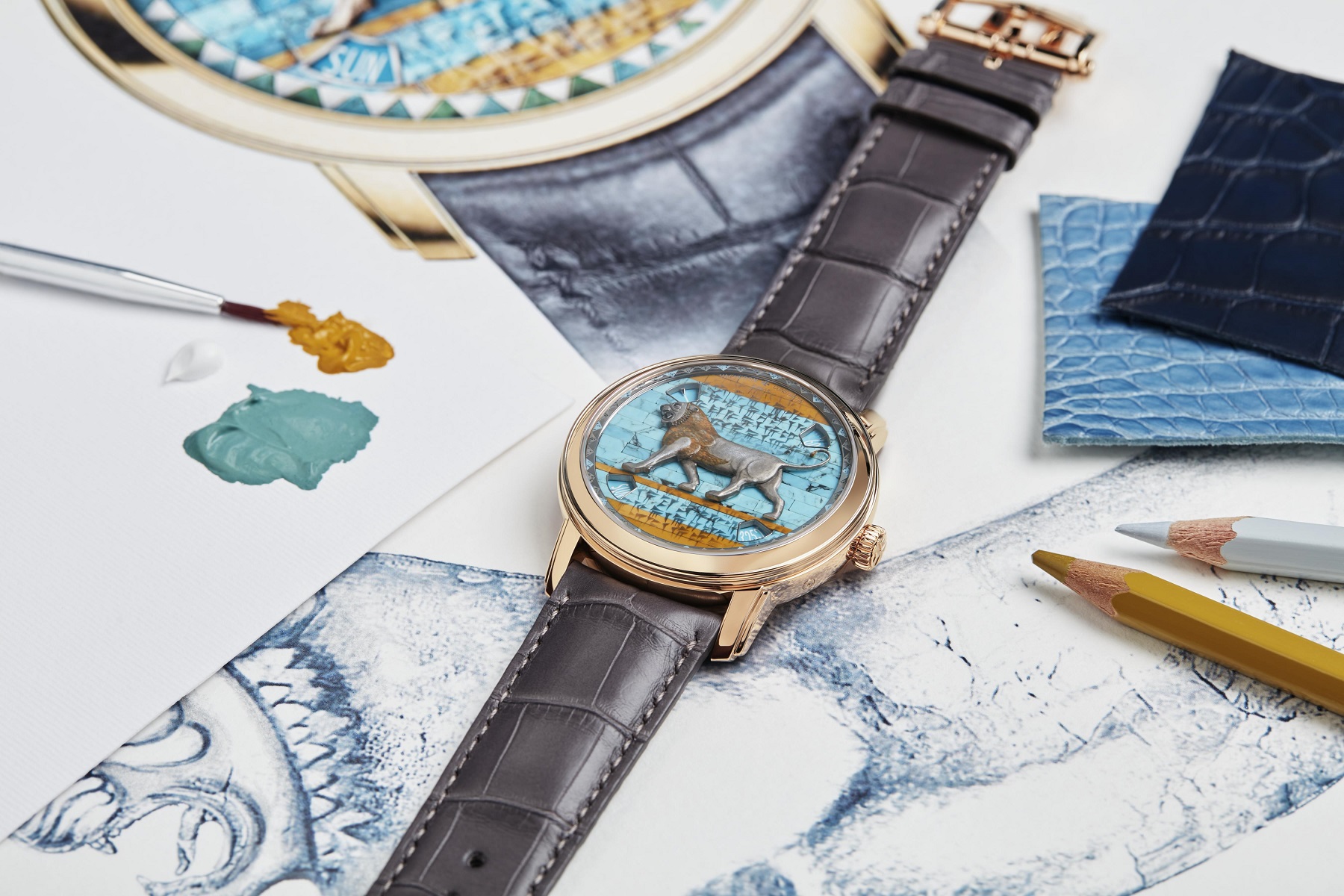 A watch depicting the Frieze of Lions. Photo: Vacheron Constantin

In a dazzling blend of art, crafts, and horology, the 265-year-old Swiss watch brand Vacheron Constantin has released its latest metiers d’art collection in collaboration with the world-famous Louvre museum. Part of a three-year artistic and cultural partnership, the new collection—dubbed Métiers d’Art Tribute to Great Civilizations—is a limited-edition group of four timepieces that pay tribute to the great civilizations of antiquity, inspired by some of the museum’s most beloved treasures. Included are works from the Persian Empire under Darius the Great; the Egypt of the pharaohs from the time of the Middle Kingdom; the Hellenistic period in Greece; and the birth of the Roman Empire with the advent of Augustus. To reproduce the “Frieze of Lions of the Palace of Darius,” for example, the talented Vacheron Constantin artisans opted for stone marquetry using 69 fragments of turquoise and yellow jasper. Or, for the “Buste d’Auguste,” a gold applique tops a dial crafted in blue-green enamel and adorned with stone micro-mosaic. Presented in 42mm pink or white gold cases, all four watches are powered by a self-winding calibre 2460 G4/2 with a complex display. —Lucy Rees