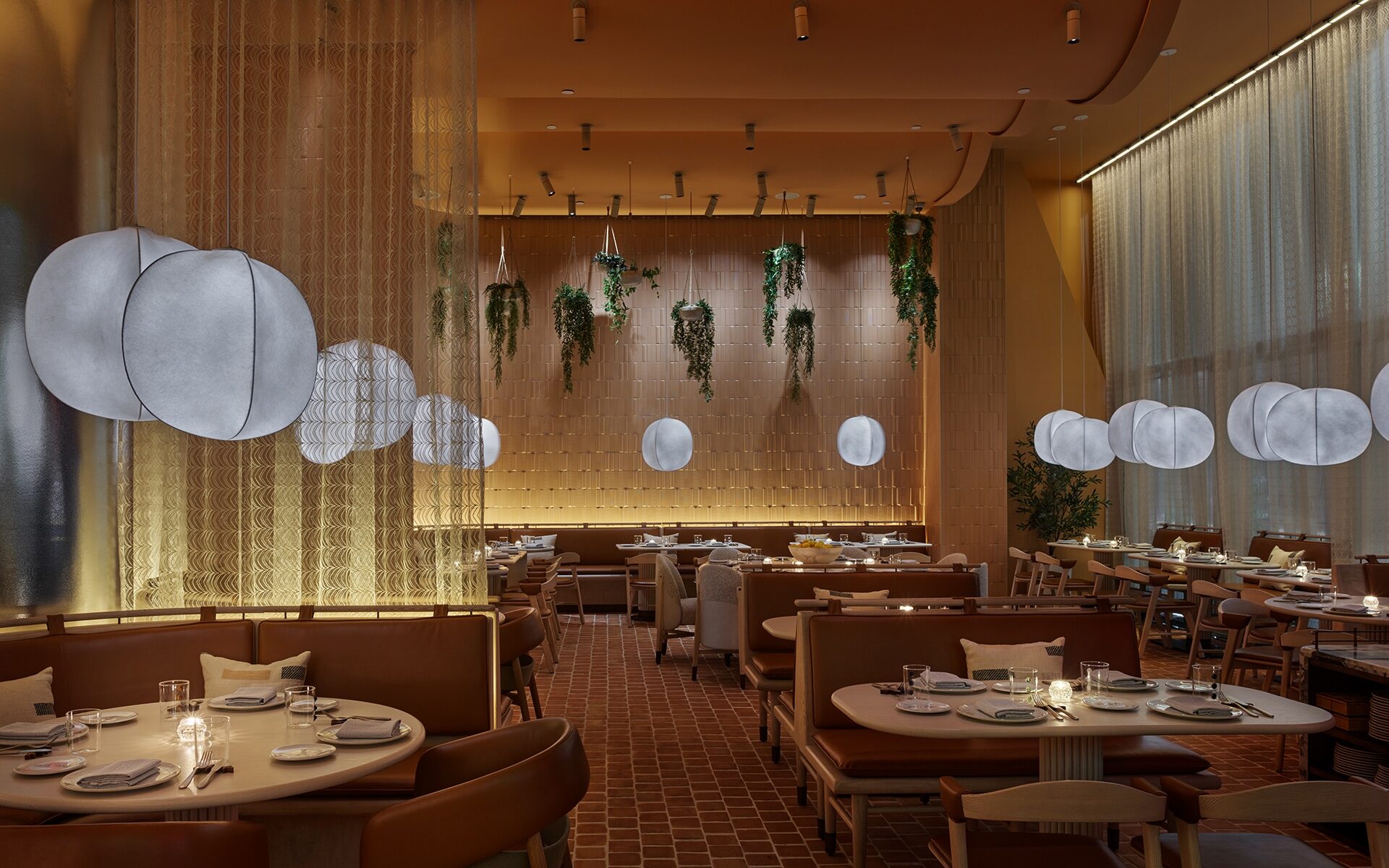 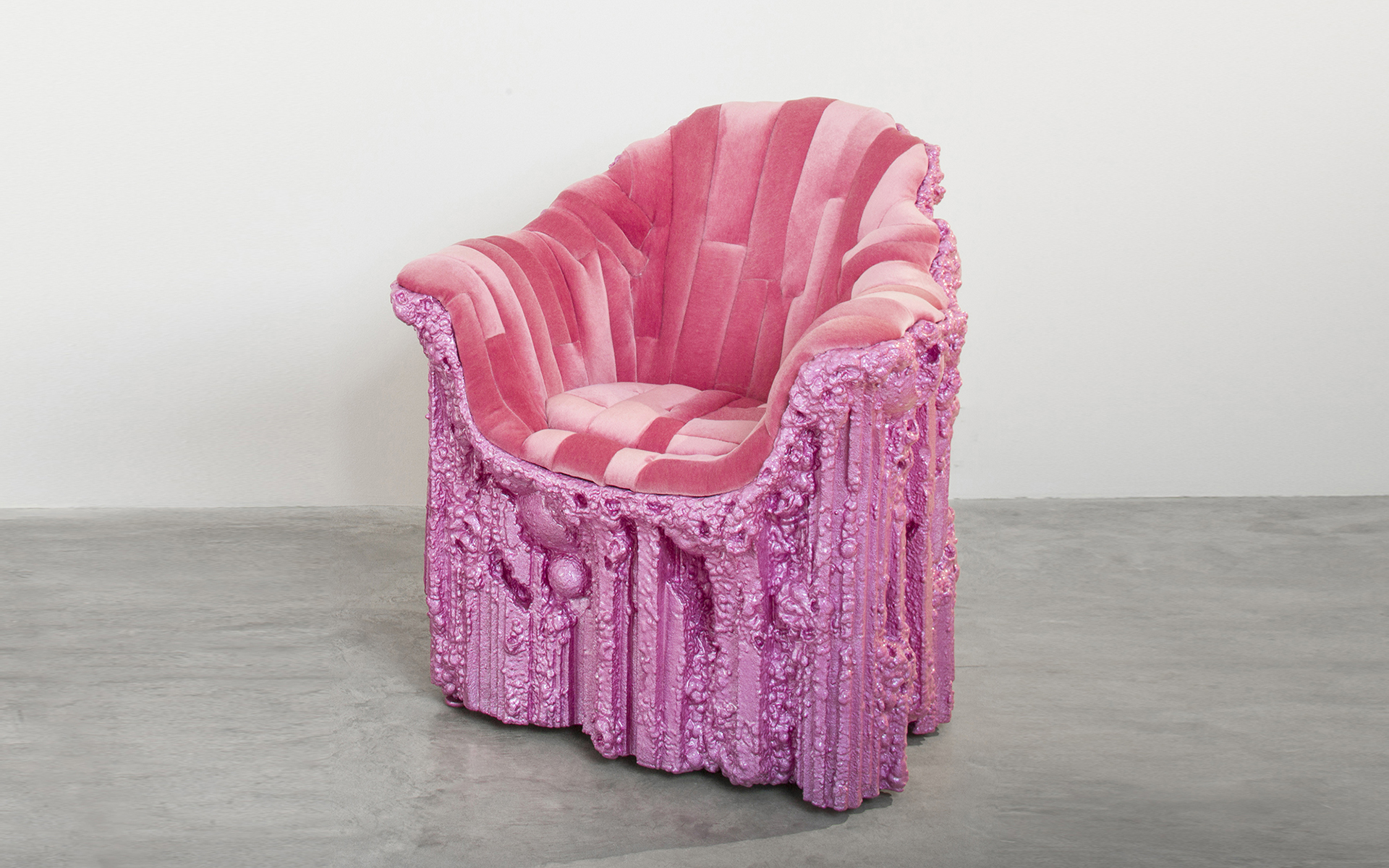 1. Chris Schanck’s New Exhibition at the Museum of Arts and Design

Manhattan’s Museum of Arts and Design (MAD) will soon host “Chris Schanck: Off World,” an exploration of the Detroit-based artist’s fantastical furniture and objects, with newly created pieces that mark a turn towards more figural work. On view from February 12 through January 8, 2023, the show is Schanck’s first solo museum exhibition in New York City, though he recently completed a commission at the Dallas Museum of Art in which he wrapped found objects in resin and aluminum foil to create a shimmering vanity that nods to a late-19th century Martelé dressing table in the DMA’s collection. To curate the MAD show, the museum tapped Andrew Blauvelt, Director of the Cranbrook Art Museum, who worked with Schanck over the course of several years to put together a striking tableaux of vivid, lustrous pieces that elaborately bridge design eras in a way that’s both visually arresting and extraordinarily innovative.—Geoffrey Montes 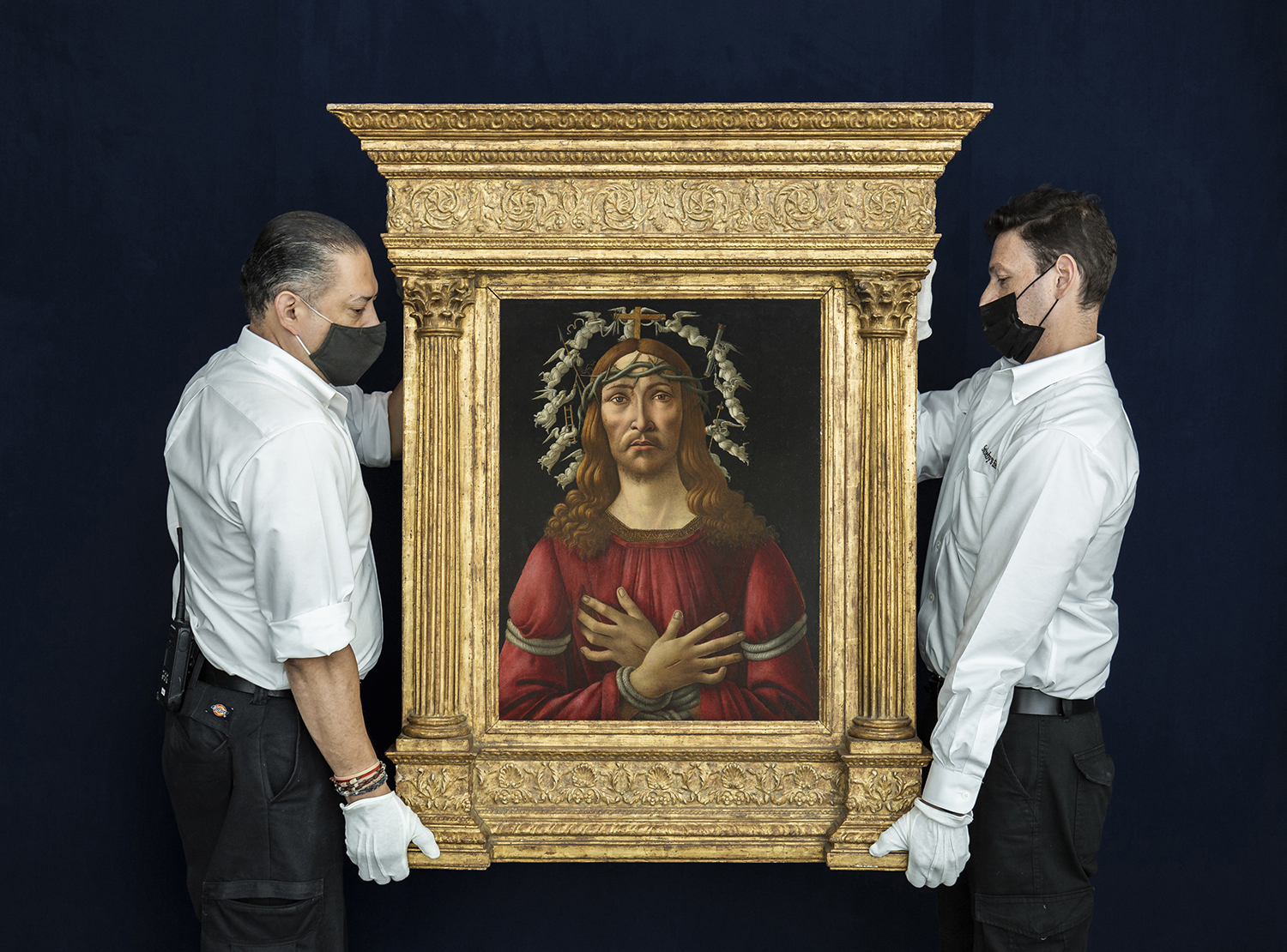 Sandro Botticelli’s The Man of Sorrows. Photo: Courtesy of Sotheby's

2. Sandro Botticelli’s The Man of Sorrows Sells for $45.4 Million

Museums, fairs, and auction houses have seen a steady rise in interest surrounding Old Masters; this past week, Sandro Botticelli’s The Man of Sorrows achieved $45.4 million during Sotheby’s January 27 “Master Paintings & Sculpture” sale following an intense seven minutes of bidding. In the same private collection since being acquired at auction in 1963, the painting comes to the block almost a year after Sotheby’s landmark sale of the artist’s Young Man Holding a Roundel, which saw the hammer drop at $92.2 million. “Botticelli’s Man of Sorrows is one of the most potent, humbling works I have ever encountered,” Christopher Apostle, Head of Sotheby’s Old Masters Painting Department, New York said in a statement. “Though seemingly religious, it’s a painting of enormous humanity—a portrait of human suffering and spirituality that speaks a universal language. Today’s result is not only testament to its power and importance, but also to the timelessness of works painted some 500 years ago.”—Jill Sieracki 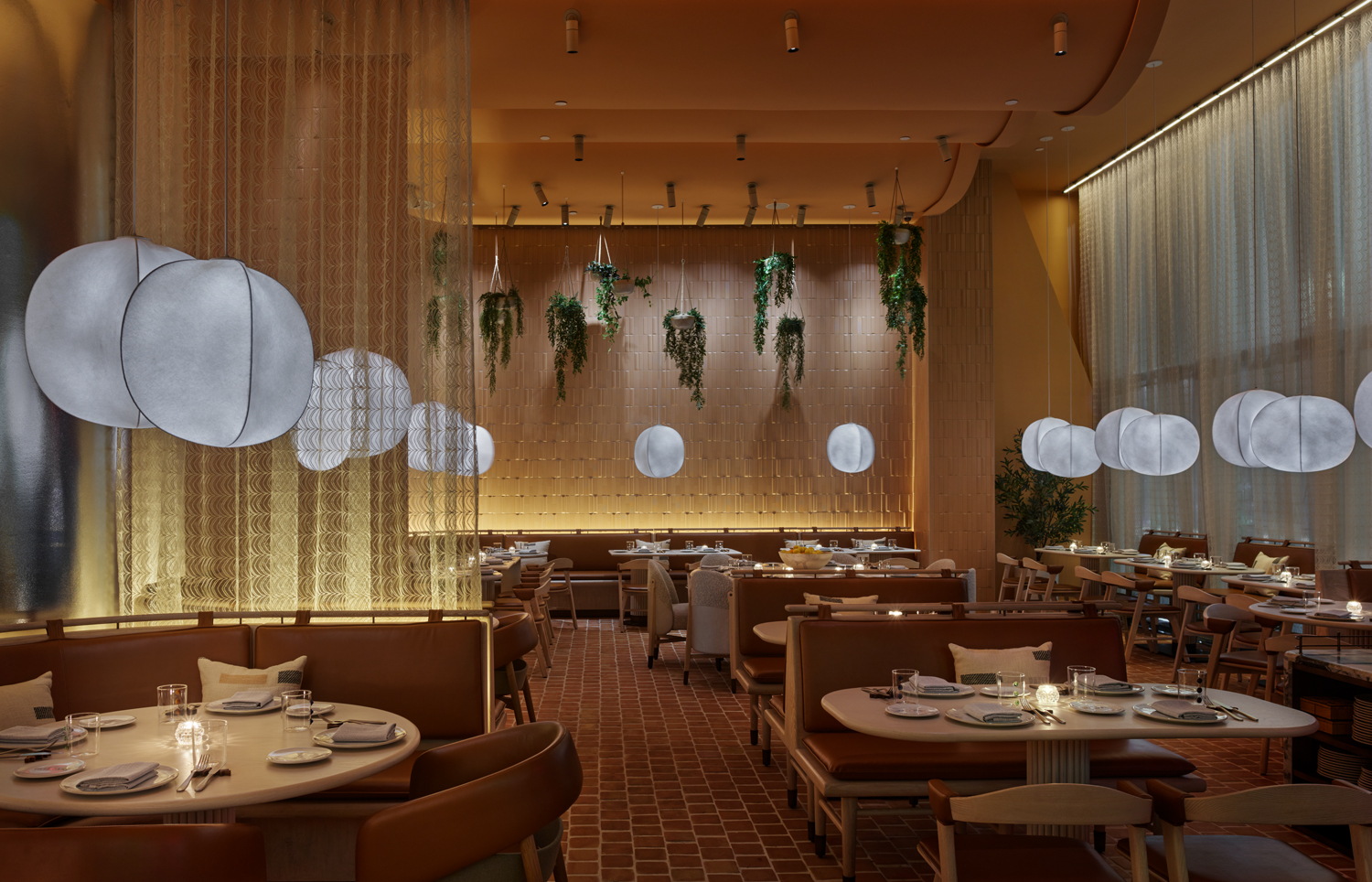 3. Casa Dani, Designed by Rockwell Group, Captures the Spirit and Flavors of Spain on Manhattan’s West Side

The West Side of Manhattan continues to heat up with the launch of Citizens, a new dining and drinking complex designed by Rockwell Group. The jewel of the offering of two restaurant multiple bars, and food hall is Casa Dani. Helmed by three-Michelin-starred Spanish chef Dani García, the culinary destination offers the flavors of the Mediterranean coast. The transportive and extensive menu includes an entire tuna menu inspired by Andalucía, a fabulous take on Caesar salad topped with cured meat, and family-style dishes such as a whole branzino baked in salt. But what might steal the show from the beautifully presented paellas and fideos just might be the space’s double-height sunken dining room. Designed to capture the essence of a Spanish courtyard, the palette features warm clay plaster, light wood, cream patterned tiles on the walls, and a terracotta tile floor. The only thing missing seems to be a warm ocean breeze. –Jacqueline Terrebonne 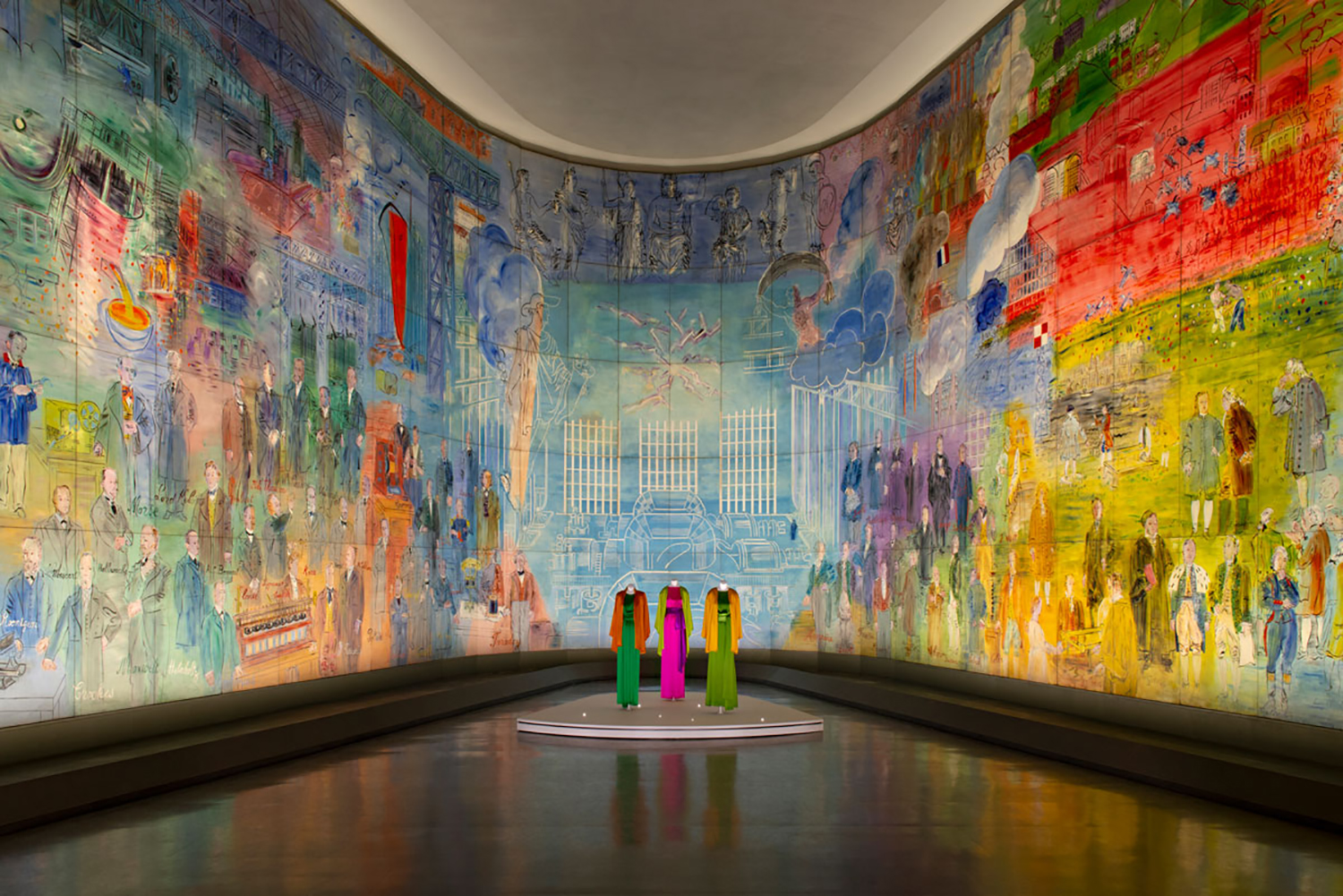 In celebration of the 60th anniversary of the founding of the maison of Yves Saint Laurent, six museums in Paris are paying tribute to the late couturier. The expansive, multi-location show has been conceived and made possible by the Fondation Pierre Bergé – Yves Saint Laurent and partners with six institutions: Centre Pompidou, Musée d’Art Moderne de Paris, Musée du Louvre, Musée d’Orsay, Musée National Picasso-Paris, and Musée Yves Saint Laurent Paris. Each location prompts a fascinating dialogue between Yves Saint Laurent fashion garments and objects in the museum’s permanent collection. At Centre Pompidou, for example, visitors will get a special isight into how Saint Laurent was inspired by 20th century art. A highlight is a 1965 shift dress designed in direct homage to Piet Mondrian. —Lucy Rees 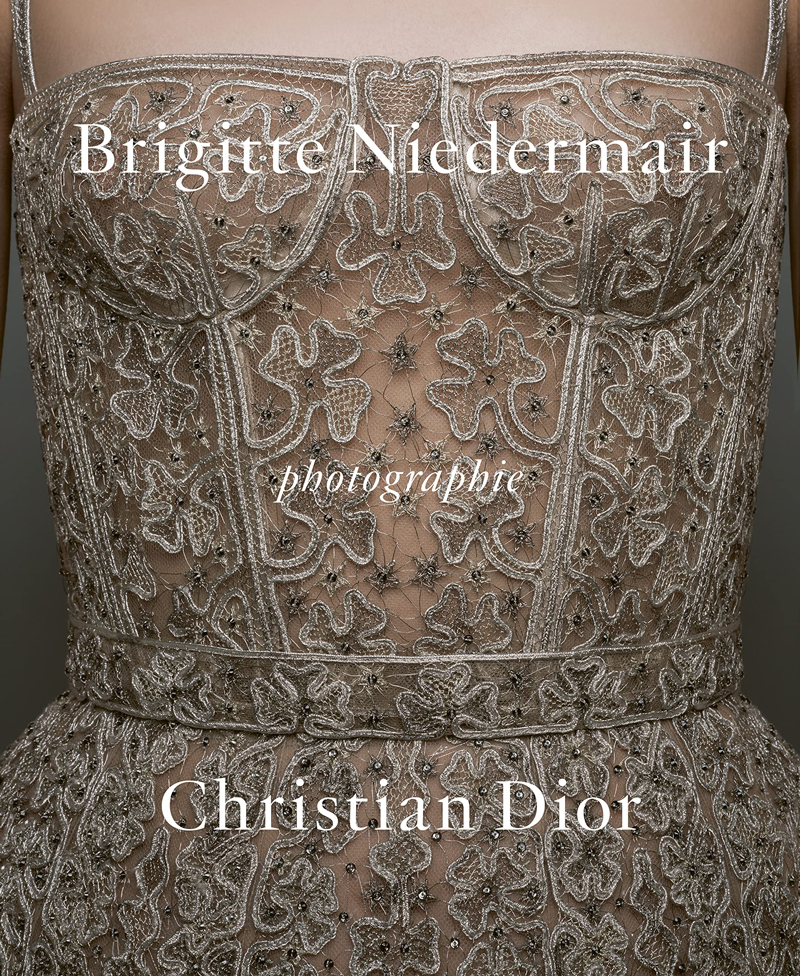