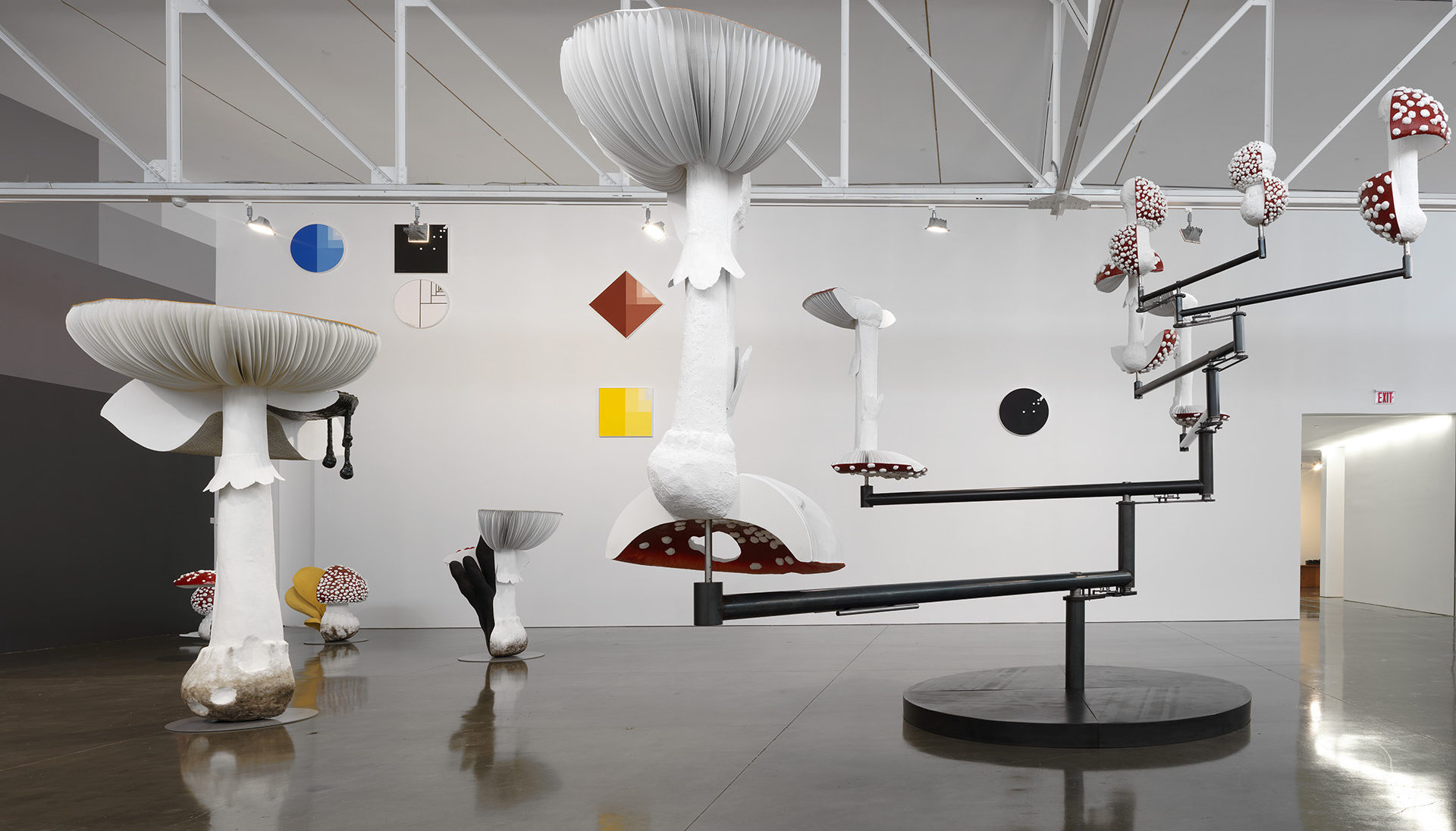 12 Exhibitions To See in New York This Summer

Unlike most gallery exhibitions that seem to end the very moment you find the right time to go, these 12 New York galleries have exhibitions running through July and August—reason alone to stay in the city over summer, or come for a visit. From Leo Villareal’s rhythmic light installations to Carsten Höller’s whimsical hanging mushrooms, and Del Kathryn Barton’s exquisitely detailed paintings to Erik Lindman’s abstract explorations into the nature of painting, there’s no shortage of variation to hold your attention and satisfy a range of artistic niches. And with explorations into topical subjects such as femininity, globalization, and notions of identity and values, these shows are sure to keep you thinking. Galerie Perrotin’s new Lower East Side space hosts “Fond Illusions,” an exhibition linking the work of nine emerging and leading artists from around the world with a common strand: their exploration of the visual effects of unconventional materials. Each artist’s chosen medium, whether steel, balloons, or Plexiglas, plants a different impression, begging the viewer to contemplate the flat world of 2D with the corporeal world of 3D. Each work offers an insight into the artists’ mind, merging the physical with the psychological. An exhibition to be experienced from various perspectives, visitors can experiment by viewing the works from different angles. Artists include Kathryn Andrews, Sophie Calle, Leslie Hewitt, Bharti Kher, Alicja Kwade, B. Ingrid Olson, Cornelia Parker, Gala Porras-Kim and Tatiana Trouvé. perrotin.com In 1925, Georgia O’Keefe said: “I feel there is something unexplored about women that only a woman can explore.” Almost a century later her words still stand to be explored, inspiring the curators of “Women Seeing Women” at Staley Wise Gallery. A celebration of the complexity of the female experience, the collection of photographs of women, by women, highlights subjects of war, childhood, religion, sexuality, and style, from Spain to Iran, and Nicaragua to India. The 24 photographers include some of the most celebrated fashion and documentarians of our time. (Think Lillian Bassman, Eve Arnold, Olivia Arthur, Newsha Tavakolian, Louise Dahl-Wolfe, and Ellen von Unwerth.) The exhibition is part of the 70th anniversary of Magnum Photos, and twelve of the photographers were part of the cooperative. staleywise.com Pace Gallery has been transformed into an ethereal collection of complex and rhythmically lit rooms with Leo Villareal’s new light installations. An immersive experience, the various light arrangements serve almost as portals, designed to mesmerize and take the viewer to another place. Using cutting-edge technology, the LED pieces are first constructed as rays of light before they take on individual patterns of movement, creating an unpredictable and constantly-changing installation. pacegallery.com Visitors can’t be blamed for the temptation to take a seat in Wendell Castle’s sumptuous inviting furniture, now on view in “Embracing Upheaval,” an exhibition at Friedman Benda through August 11th. The show presents Castle’s exploration of two distinct approaches to furniture design: Block and Free Form. In the Block series, chairs and tables emanate from solid slab-like construction, forms born of wood. In the Free Form series, the artist draws inspiration from music, recalling an abstract line drawn in space. Of note is a beautiful series of white to-scale models, revealing his meticulous process. It offers visitors a chance to see how the so-called father of the art furniture movement convergences sculpture and design, and pushes boundaries of furniture making. friedmanbenda.com Carsten Höller’s work, currently on view at Gagosian in Chelsea, is not fueled by creative decisions. Rather, as the title of the exhibition suggests, the artist strays away from objectivity and allows formulas to determine his artistic compositions. The approach is one that emerged from his background and interest in natural science; Höller has been long curious about the way we understand the world, studying the attributes and behaviors of humans, fungi, insects, and animals by imposing standardized systems of logic. Expect to see the gallery transformed into a laboratory of sorts with flying mushrooms and revolving doors, that Höller hopes is somewhere between “rationality and incomprehensibility.” The artist also has a major exhibition at the soon-to-open Centro Botín in Spain. gagosian.com Through July 28th, Tyler Rollins Fine Art presents two new video works by Araya Rasdjarmrearnsook. One of the most influential Thai artists, Rasdjarmrearnsook’s videos have a meditative, ritualistic quality, inspired by Thai Buddhism. They focus on the idea of communication between different realms: the living and the dead, the insane and “normal,” humans and animals, and the worlds of art and “real life.” The show is a meditation on what the artist calls “the inseparable entanglement of things/lives/subjects,” a domestic environment where dreams and reality beautifully meld together. In one work, Four Monks with Three Ladies in Sanook Dee Museum, Rasdjarmrearnsook explores the meeting point between some of these oppositions. While serious issues of class and cultural differences are explored in her work, the videos also convey a sense of curiosity, humor, and joy that emphasize a common humanity. trfineart.com Celebrated Australian artist Del Kathryn Barton’s first solo exhibition in the United States, “r u a bunny?” reveals her signature highly detailed oversized paintings. The works command the viewer to draw close in order to grasp just how exquisitely each detail contributes to the whole. Barton’s ethereal work incorporates elements of the natural world and mythology to explore femininity and strength, using traditional painting techniques with contemporary design and illustration. The exhibition includes a range of paintings, the screening of a short film, RED, and a series of hand-finished photomontage works that conflate the female form with exotic flowers. albertzbenda.com Luhring Augustine Bushwick presents Mexican artist Miguel Calderón’s Caída Libre, a film and sculptural installation centered on the theme of falconry. Falconry, an interest sparked by Calderón’s own experience having a hawk as a child, demonstrates an interdependence between man and animal. The years of discipline it takes to train one’s bird leads to an obsessive fixation in maintaining the partnership, a relationship powerfully highlighted in the show. Calderón’s sculptural installation presents perches that are missing their falcons, recollecting the fear a falconer has of losing his bird, and therefore losing the treasured bond. The perches, without their occupants, become sculptural and raise questions of the falconer and falcon’s story. luhringaugustine.com The emerging talent’s first solo exhibition in New York expresses Lindman’s endless curiosity about how painting functions at this moment in time. His work is notable for its exploration of painting’s constituent parts. Lindman also poses broader questions about why paintings get made and why viewers return to look at them again and again, focusing attention on their cultural ramifications. In some cases he scavenges materials like luan or stainless steel from his urban surroundings, affixes them seamlessly to panels, and then applies paint to them. In others, he proceeds in a more traditional manner, finding forms through the act of painting and inscribing shapes on linen grounds. This exhibition at Parisian dealer Almine Rech’s first U.S. space includes a group of his large-scale vertical paintings as well as several smaller works. alminerech.com A fascination with the horizontal line is what prompted Cheim & Read’s summer exhibition—more specifically, how it can reflect nature yet still retain the essence of abstraction. A meditative group exhibition exploring the poetics of the horizon in abstract art, it was inspired by a quotation from Agnes Martin: “Anyone who can sit on a stone in a field awhile can see my painting. Nature is like parting a curtain you go into… as you would cross an empty beach to look at the ocean.” On view in the meditative display are 21 artists, from modern masters to emerging talent with works dating from 1937 to today, including Louise Bourgeois, Ron Gorchov, Jenny Holzer, Ellsworth Kelly, Richard Serra, Hiroshi Sugimoto, and Cy Twombly. cheimread.com Maira Kalman, None of us is perfect, 2005, oil on paper. Photo: courtesy of the artist and Julie Saul

Julie Saul Gallery presents an exhibition of Maira Kalman’s complete series of fifty-seven illustrations from her book The Elements of Style Illustrated. Kalman, illustrator of both children and adult books, encountered William Strunk and E.B. White’s The Elements of Style at a second-hand bookstore in 2002, and immediately saw its need for visual interpretation. It has since become her most beloved project, and is now being presented in its entirety as one work. As much an exhibition about art as it is the written word, Kalman’s signature colored paintings are shown in relation to their accompanying text, which brings out their humor and complexity. saulgallery.com Tanya Bonakdar Gallery presents a solo exhibition of Meschac Gaba’s new work. Inspired by his own experiences living between the Netherlands and Benin, Gaba explores and questions ideas of identity and value across national borders, exploring the fraught relationship the Western world and developing worlds. This exhibition weaves three bodies of work together, beginning with a participatory work on the ground floor entitled Reflection Room Tent, a reference to the tents used in refugee camps. On the gallery’s second floor, a contrastingly solemn installation, Memoriale aux Refugies Noyees, elaborates on themes of migration and displacement. Finally, the gallery’s project room presents a video work depicting a procession of 15 people wearing theatrical, hand-braided wigs in the form of landmarks in Washington D.C. (think the White House or the Pentagon). The hairpieces, a series that the artist has been working on since the 2000s, are on display in the main gallery. tanyabonakdargallery.com