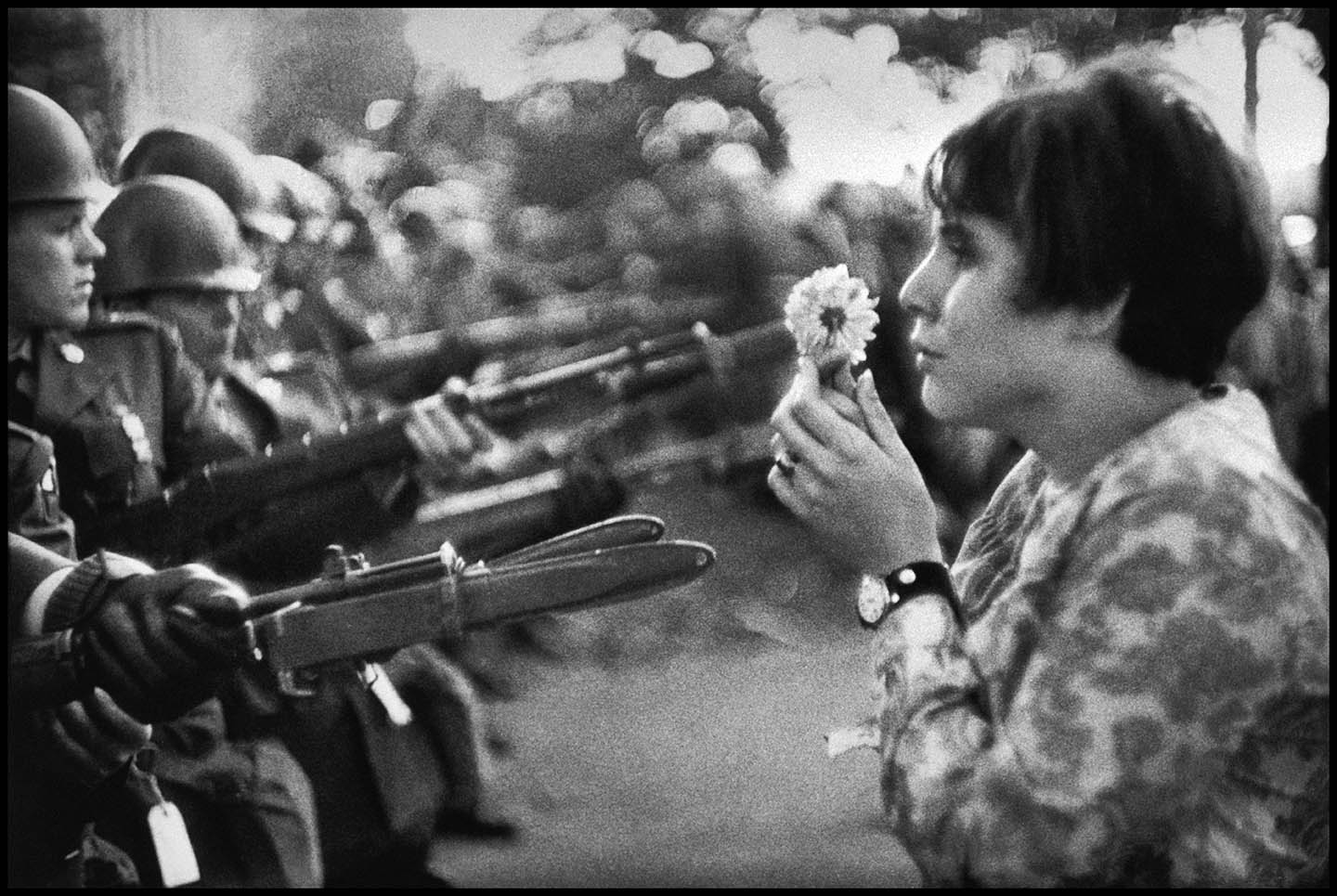 A photo of a young American girl confronting the American National Guard outside the Pentagon during the 1967 anti-Vietnam march is on display at the International Center for Photography.
Photo: © Marc Riboud / Magnum Photos

70 Years of the Most Powerful Photojournalism on Display

Andy Warhol famously said, “The best thing about a picture is that it never changes, even when the people in it do.” Searching through the online archive of Magnum Photos, you’ll find iconic figures from the past seven decades perfectly preserved like bugs in amber. The agency, an international photographic cooperative owned by its photographer-members, was founded in 1947 by Robert Capa, Henri Cartier-Bresson, George Rodger, and David Seymour. And while many of their former subjects (think Ernest Hemingway holding a rifle, Simone deBeauvoir on a Parisian street, first aid workers in World War II Britain, or a prostitute in West Germany), have long passed, the images remain as vibrant as ever, evoking the time, place, and personality better than any book could. We hate to repeat the cliché but, some of these pictures really are worth a thousand words. This year, Magnum Photos celebrates its 70th anniversary. The agency’s role is to claim author rights for photographers, something that’s become especially important in the digital age.

Clara Bouveresse, who co-curated the anniversary exhibition “Magnum Manifesto” at the International Center for Photography (through September 3), explains that one of the founders’ initial fights was getting clients to return negatives to the photographers. “The fight continues as copyright is now threatened by the circulation of images online,” she says.

To select images for the show, Bouveresse and her collaborator Clément Chéroux (senior curator of photography of SFMoMA) dug through the library of Magnum photographers’ books at the Paris office and pored through the online archives­—half of which, around 600,000 images, are available to the public.

The pair developed a three-part structure for the exhibition. The first part, “Human Rights and Wrongs,” covers 1947–1968, the second, “An Inventory of Differences” from 1969–1989, and the third, “Stories about Endings” from 1990–2017. Social concerns—from post-war rebuilding to the Civil Rights movement to today’s refugee crisis—pervade the showcased works. Russia, Altai Territory, 2000. Villagers collecting scrap from a crashed spacecraft, surrounded by thousands of white butterflies. Environmentalists fear for the region’s future due to the toxic rocket fuel.

Two “intermissions” offer alternate surprises. Between parts one and two, visitors can interact with Charles Harbutt’s Picture Bandit Apparatus. Pull the crank of the slot machine-like device and it will juxtapose three random images, projecting them onto the wall. Between parts two and three, corporate reports reveal the artistry in many of the photographers’ lesser known, more commercial work. “Those commissions were debated within Magnum as some photographers thought that the distinction between journalism and communications was disintegrating,” explains Bouveresse.

Additional exhibitions throughout New York add to Magnum’s festivities. Throughout June, the Fulton Center in Lower Manhattan is hosting a rotating digital exhibit of over 300 of the agency’s images across 50 screens. Neuehouse and Milk Gallery will mount iconic pictures throughout their spaces this summer. The Rubin Museum’s exhibition of Cartier-Bresson’s India photographs offers a more honed perspective of the agency’s work, while both Metrograph (through June 24) and MoMA (June 24 through July 1) will both host celebratory screenings. Magnum’s global business development manager Fiona Rogers explains the importance of utilizing the different venues. “Magnum’s very good at being seen in an institutional setting. But I also wanted to shake things up and be more surprising,” she says.

The agency has worked to transform their previously analogue model into a forward-facing, digitally-accessible resource. And they hope to do the same in their programming. Magnum Photos, says Rogers, has borne witness to events that have shaped the world over the last seven decades. As Magnum invests in its digital future, it continues to engage the community in ever more relevant ways. And while the viewing platforms constantly change, the pictures never do.

Click here to see a selection of Magnum photographs.

Cover: A photo of a young American girl confronting the American National Guard outside the Pentagon during the 1967 anti-Vietnam march is on display at the International Center for Photography.
Photo: © Marc Riboud / Magnum Photos
Next Post