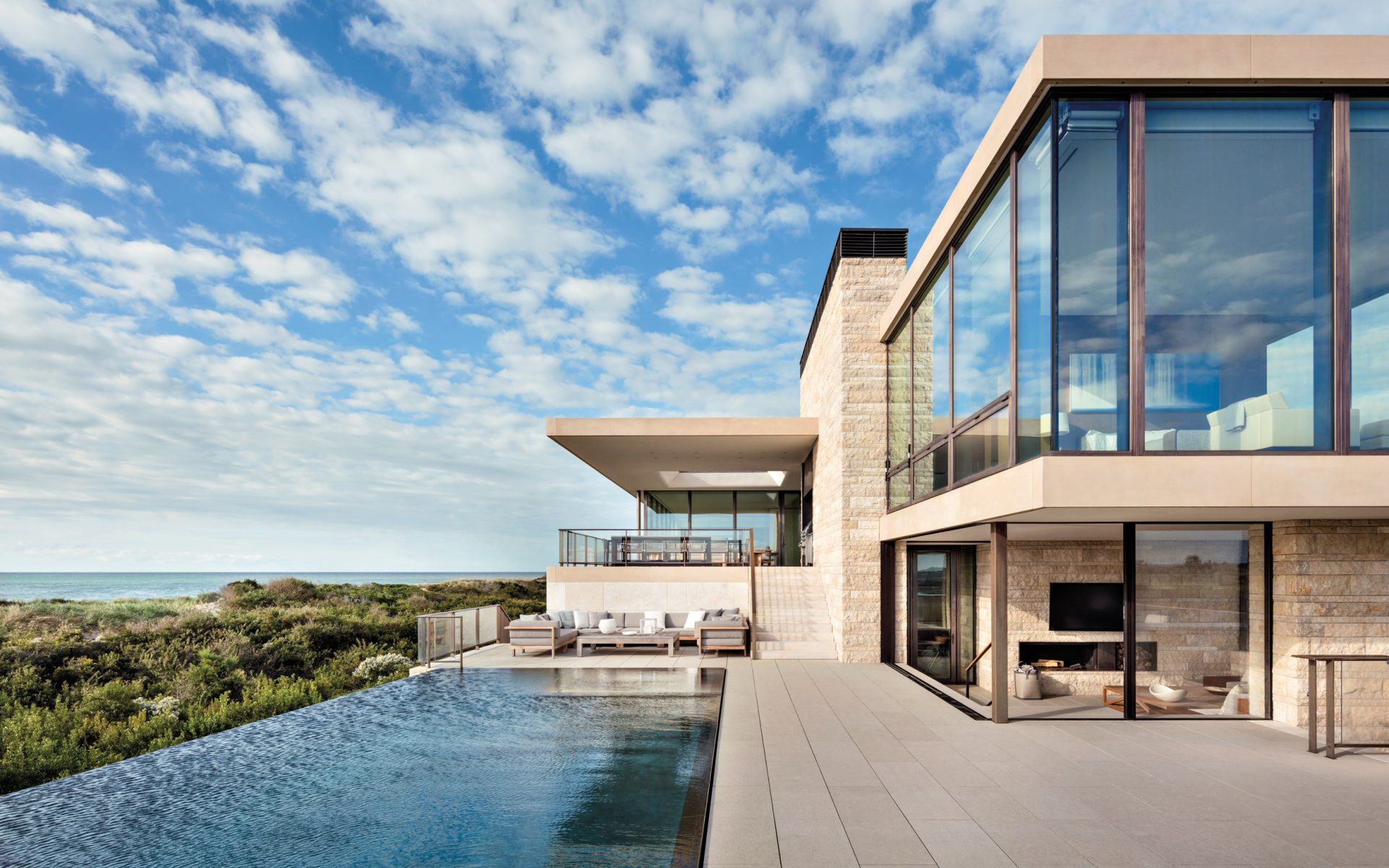 Bocci pendant lights dangle dramatically in the double-height entry hall, where a photograph by Andreas Gursky and a colorful wall hanging by El Anatsui are on opposite walls; views extend out to the dunes, past a small terrace anchored by a Maya Lin sculpture. Photo: Charles Mayer Photography

When a Manhattan investment manager and his wife began looking for a weekend perch out in the Hamptons, they weren’t focused on a particular community. “We were really driven by, where can we find a special property?” says the homeowner. Then they discovered what could fairly be described as one of those won’t-come-along-again opportunities: an oceanfront site in Southampton bordered by protected dunes, ponds, and wetlands—meaning spectacular light and views that were guaranteed to remain unobstructed. Forever.

After tearing down the existing 1980s house, which failed to fully take advantage of the “magnificent dunescape setting,” as the homeowner puts it, the couple worked with a blue-chip team comprising the architecture firm Leroy Street Studio, interior designer Victoria Hagan, and Hollander Design Landscape Architects’ Edmund Hollander to create an 11,000-square-foot, five-bedroom home that is essentially just two levels (plus a basement), though it feels like more, thanks to offset floor planes and varying ceiling heights as well as the diversity of outdoor spaces. “It’s a gigantic jigsaw puzzle, and every square inch is thought out,” says the homeowner, noting that everything is calibrated to maximize connections to the natural splendor.

“The idea is that the house rises out of the dunes and is the same color but also has this transparency,” says Morgan Hare, a founding partner at Leroy Street Studio. “While most homes on the ocean tend to face one direction, this was an amazing opportunity to have cross views through the house with water on three sides.”

The clients issued a couple of basic directives at the start: They wanted a modern house that could accommodate their three adult children as well as friends, and they wanted it to be inverted, with the entertaining areas on top and the bedrooms—with the exception of the master suite—below. “They’re very family oriented, so having lots of common spaces was a priority,” Hare says. “And another big driver was the open views from the master bedroom.” To add drama to that view, the architects placed the couple’s bedroom at the east-facing end of the house, cantilevered it out over the pool deck, and wrapped the space entirely in glass. “My biggest problem is that I’m so excited to see the sunrise every day that I don’t sleep long enough,” says the homeowner. “In the morning, you look out and see mist rising over the ponds and deer hopping through the dunes.”

When it came to materials, Leroy Street Studio opted for consistency throughout: gray-gold Palestinian limestone for the exterior and select interior walls, gray French limestone pavers for the entrance area and terraces, oak for most doors and floors, marble and onyx in the baths. For the furnishings, Hagan—who previously decorated the clients’ more traditional homes in Manhattan and Aspen, Colorado—kept things modern, muted, and comfortable. Sumptuous fabrics and plush carpets are a restrained mix of grays, creamy buffs, and sea blues. “Clearly, the palette was inspired by the beach, the nature,” she says. “And everything is very soft and tactile.” Art also played a central role in the planning, as major pieces from the couple’s collection were designated from the outset to anchor specific spaces. Mounted opposite each other in the double-height entry hall are one of El Anatsui’s substantial wall hangings made with shimmering bottle caps, above the floating staircase, and a seven-foot-wide version of Andreas Gursky’s iconic, arrestingly minimal photograph of the Rhine River. It’s an impression-making welcome, with two dozen molded-glass pendant lights dangling overhead and sight lines all the way through the house, out to the grassy dunes. Also visible, on a small rear terrace, is a Maya Lin marble iceberg sculpture, which she made specifically for the spot. “It was the melting of the icebergs that created the moraines and dunescapes of the Hamptons,” explains the homeowner. One of the home’s most used spaces is the covered dining terrace, whose overhang features an opening with retractable louvers, which can be adjusted for different conditions. Hagan furnished the seating area with sofas, armchairs, and a large cocktail table that are all by Walters, while the long dining table and chairs are by Harbour Outdoor. Photo: Scott Frances

Upstairs, a massive inverted-V wall sculpture in royal blue by Ellsworth Kelly serves as a kind of visual bridge between the open living and dining areas, where you’ll also find works by Sean Scully and Louise Fishman. Just outside, the overhang that covers the dining terrace features a large cutout the family calls their “James Turrell moment,” a reference to the artist’s signature “Skyspace” installations. The opening features a system of louvers that can be variously angled or retracted completely—à la Turrell—for different levels of exposure. Hollander, whose goal was to bring the landscape right up to the house, designed the infinity-edge pool (lined with DDC chaise longues) and filled terrace planters with native wildflowers. Photo: Charles Mayer Photography

The outdoor spaces are where you’ll most often find the family, whether enjoying a buffet lunch on the covered terrace, lounging next to the 50-foot infinity-edge pool, drinking sunset cocktails on the roof, or watching a movie by the fire on the screened porch, where sliding glass doors allow the space to be enclosed or almost entirely open depending on the weather. “One of the great things about this house is how it opens up to the terraces and how inside and outside kind of blur,” says Hollander, who describes the property as one of the most beautiful he’s ever worked on. “It’s like Mother Nature was at her greatest in creating this place. Our approach to the landscape was really about how we bring that nature right up to the building and pay respects to her.”

With the exception of a modest patch of lawn (which hosts a colorful Anthony Caro sculpture) out front, Hollander layered the perimeter of the house with hardy native species: seaside goldenrod, beach roses, bayberry, beach plum, and dune grasses on the ocean side; wetland shrubs, marsh grasses, and wildflowers such as hibiscus and ironweed in the pond-facing areas. Walkways leading to the pond and the beach are more meandering and lower to the ground than you typically find here. To comply with local codes, they’re also slatted to create openings for light and moisture to reach the plant life underneath. “We convinced the town to allow us do something that’s more sinuous and sexier and seems to float right in the dunes,” says Hollander. Offering wraparound views of the ocean, dunes, and ponds, the master bedroom features a custom-designed bed dressed in E. Braun linens, club chairs and an ottoman by Liaigre, a low table by Wyeth, and a rug by Crosby Street Studios. Photo: David Sundberg/ESTO

The landscape architect also worked closely with Leroy Street Studio to create a partial green roof featuring grasses that echo “the feel of the dunes below,” he says. The residence also has solar panels installed above the master bedroom as well as a geothermal heating and cooling system. “It’s as green as you can make a house of this size,” notes Hare.

Though it was completed less than a year and a half ago—indeed, tweaks are still being made—the house feels as if it has been there much longer. “To say that about a contemporary home is interesting,” observes Hagan. “It just feels like it’s connected to the land.”

A version of this article first appeared in print in our 2019 Summer Issue under the headline Sand, Sea, Sun, Sky. Subscribe to the magazine.

Cover: Exterior includes an infinity pool as well as breathtaking views of the Southampton coast.
Photo: Scott Frances
Next Post