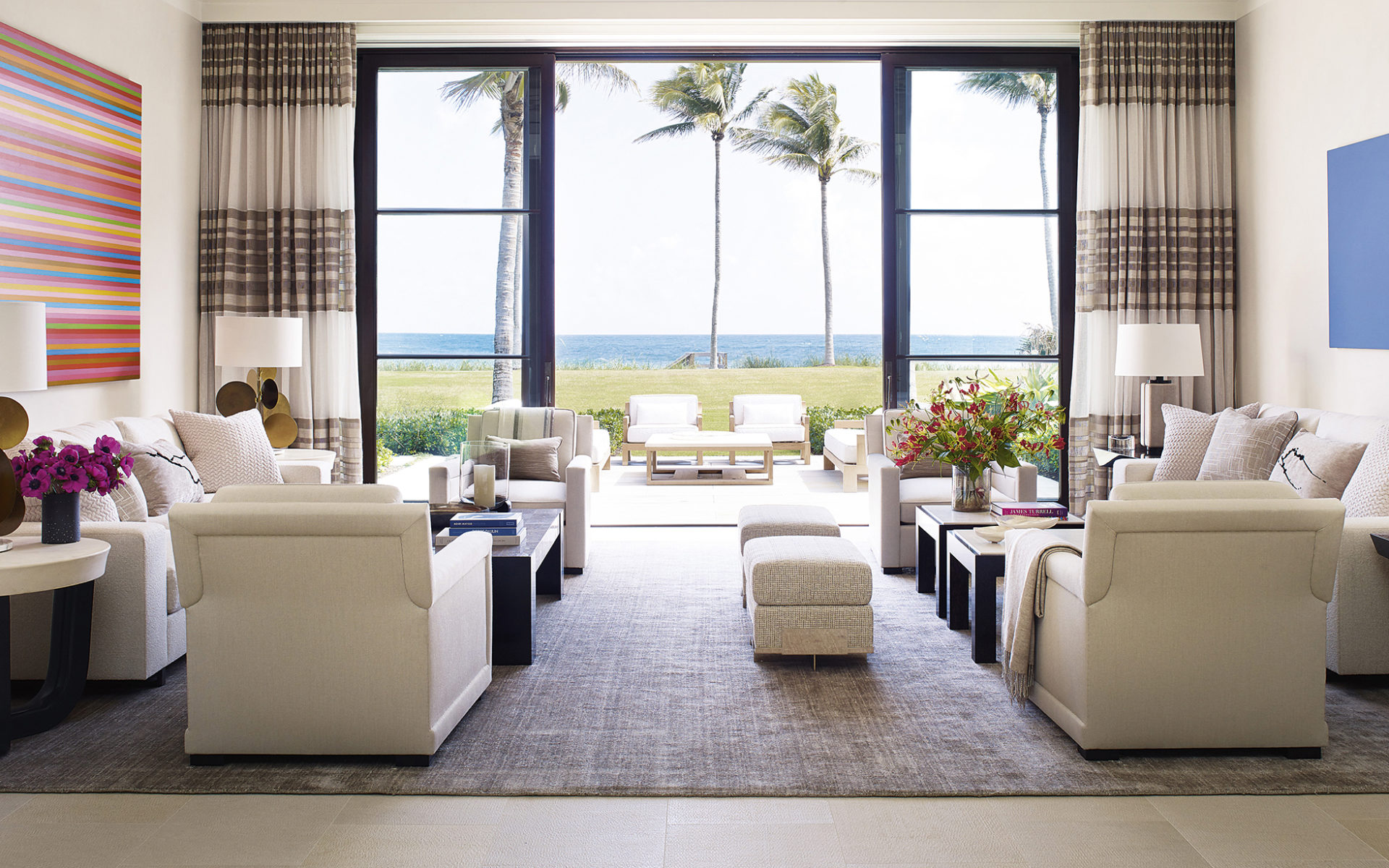 Commanding artworks anchor the living room with paintings by Bridget Riley (left) and Robert Mangold; the bronze table lamps (left) and side table at right are by Hervé Van der Straeten from Ralph Pucci, the custom-made rug is by Mansour Modern, the curtains are of a fabric by Hiroko Takeda, and the outdoor furniture is by Christian Liaigre.
Photo: William Waldron A sculpture by Carol Bove animates an oceanfront property on the coast of Florida. The home was designed by Victoria Hagan, with architecture by Timothy Bryant. Photo: William Waldron

The mammoth structure, which was listed for sale on the Florida coast a couple of years ago, wasn’t really a residence—but it wasn’t commercial, either, having started out as a house before morphing into a combination business retreat/clubhouse getaway. And it wasn’t really one building, but rather a series of three homes cobbled together, like a deconstructed wedding cake, by the previous owner. The floor plan was awkward, with large, disconnected spaces on the inside—including nine bedrooms, a 12-seat screening room, and a double staircase fit for a hotel—and a confusion of rooflines outside. For most potential buyers, the yellow stucco edifice was one giant white elephant.

The obvious choice—tearing the whole thing down and starting over—was complicated, as new local building codes would allow for only a much smaller house to replace it. But one savvy Midwestern couple was able to look past all the obstacles and see 3.7 perfect acres right on the Atlantic Ocean. Instead of a white elephant, they saw the footprint of something they were confident they could work with—and they knew the perfect designer to make it happen. Commanding artworks anchor the living room with paintings by Bridget Riley (left) and Robert Mangold; the bronze table lamps (left) and side table at right are by Hervé Van der Straeten from Ralph Pucci, the custom-made rug is by Mansour Modern, the curtains are of a fabric by Hiroko Takeda, and the outdoor furniture is by Christian Liaigre. Photo: William Waldron

There’s a word in German to describe a building in which an architect designs every last detail: Gesamtkunstwerk, a total work of art. What the interior designer Victoria Hagan accomplished here for her clients could only be called a Gesamtkunstzauber—a total work of magic. She reimagined an entirely new house within the old one, making it easy to live in and intimate, yet still with plenty of square footage for entertaining friends and family galore.

The metamorphosis, however, wasn’t pulled off overnight. In fact, Hagan transformed another structure on the grounds—a large gym/spa—into a two-story, four-bedroom guesthouse so that the family could have a place to stay while the main renovation was taking place. “I almost miss staying there, I grew to like it so much,” the wife recalls. The clients are major art collectors, so Hagan knew one thing without even asking. “They needed walls,” she recalls thinking. “The rooms just flowed together.” The dining room is furnished with a table lamp by Gerald Bland and a rug by Doris Leslie Blau; the painting is by Sol LeWitt. Photo: William Waldron

Hagan, whose work on this residence and other projects are detailed in a new book, Dream Spaces (Rizzoli), out in October, expertly deployed walls and more to create a new, more logical floor plan. One long, odd, no-man’s-land area that had bisected the very middle of the former structure was entirely repurposed as the main entry, and the former atrium is now a hallway that focuses your view right through the house and out to the ocean.

“That view is one of the things that’s so spectacular about this property,” says Hagan. “I wanted you to see and feel it the moment you open the front door.”

Hagan also created a much better flow to the rooms, giving them a natural sequence and direction. She combined two lopsided spaces to create one large living room, which functions as the social hub in the evenings, and installed skylights to bring more sunshine into transitional areas, giving them an indoor/outdoor courtyard feeling so central to warm-weather architecture. The sculptural ceiling fixture in the master bedroom is by Artemide from DDC, the armchair in the foreground is by Stripe Vintage Modern, and the rug is by J. D. Staron. Photo: William Waldron

A master of nuance, she unified the interior further with a precisely balanced palette based, she says, on nature: sand, stone, and different shades of blue that provide both a sense of continuity and soothing Hervé Van der Straeten relief from the harsh Florida sun. Ceilings, louvers, and panels of cerused oak put a sophisticated spin on beach house vernacular. Subtly patterned rugs quietly float above pale stone and wood floors. Hagan’s trademark use of tactile fabrics and clean-lined furnishings at once tie the rooms together and stylishly set them apart.

Those walls, of course, provide the perfect backdrop for the couple’s collection of abstract and Conceptual art. It’s an impressive spectrum of work, with representation from 1960s masters Alex Katz, Bridget Riley, and Robert Mangold to contemporary stars like Wade Guyton, Richard Serra, and Anish Kapoor to new art-world favorites Gedi Sibony and Jacqueline Humphries. A giant white steel spiral by Carol Bove makes a wave of its own on the lawn, steps from the ocean. A woodcut by Richard Diebenkorn hangs above club chairs and an ottoman by Christophe Delcourt for Avenue Road in the sitting area. Photo: William Waldron

“One of the amazing things is that you really want to live in every space,” says the wife, who with her husband moved in last Thanksgiving. “One night we might have cocktails outside, one night we might have cocktails in the living room, one night we might be on the rooftop, and so on.” Hagan, who has since been enlisted to update the couple’s main residence as well as a mountain retreat, says, “What I love is that there’s a sense of warmth and intimacy that’s really appropriate to the family and how they live and use this place—with their friends, their kids, their kids’ kids. I think I might be most proud of the fact that when you are experiencing it, you really can’t sense it was such a major renovation. To me, it seems like we discovered how it was always intended to feel.”

Cover: Commanding artworks anchor the living room with paintings by Bridget Riley (left) and Robert Mangold; the bronze table lamps (left) and side table at right are by Hervé Van der Straeten from Ralph Pucci, the custom-made rug is by Mansour Modern, the curtains are of a fabric by Hiroko Takeda, and the outdoor furniture is by Christian Liaigre.
Photo: William Waldron
Next Post