The Gardens of Versailles Host Largest Ever Exhibition of Les Lalanne

The woodland paths and flower-filled meadows of the Château de Versailles gardens are set to welcome a new host of forest animals this summer. Opening to the public on June 19, an expansive exhibition of magical sculptures by the late artist couple Claude and François-Xavier Lalanne, or Les Lalanne as they were collectively known, will transform the famous French landscape into a surrealist dreamscape. A donkey, rabbit, and herd of sheep—all masterfully crafted in bronze—are just some of the creatures set to dot the grounds. After France’s extensive lockdowns that forced museums and galleries to shutter for months, the showcase is the perfect way to celebrate the start of summer with a much-needed blend of art and nature.

“Les Lalanne at Trianon” has been made possible by the dealer Jean Gabriel Mitterrand from Paris’s Galerie Mitterrand, who has represented the artists since the 1990s, as well as the Lalanne family and private collectors. Bringing together 50 of their most iconic sculptures, it will be the largest collection by the duo ever presented to date.

One of the most dynamic artist couples of the 20th century, Les Lalanne were celebrated for their distinctive blend of fine and decorative arts, and a keen interest in nature and the organic. While Claude was deeply passionate about the botanical world, Francois-Xavier was drawn to the animal kingdom. In his words, “the animal world constitutes the richest and most varied forms on the planet.”

Through October 19, visitors are invited to roam through the estate of Trianon, a secluded area within the vast grounds of the Château de Versailles that was built by the former Kings of Versailles in an attempt to gain some respite from the main palace. Home to the Grand Trianon, Petit Trianon, as well as the Queen’s Hamlet, the estate was designed in a rural, naturalist style that forms a perfect backdrop for the whimsical sculptures. The garden is most closely connected with Queen Marie-Antoinette, who commissioned the landscaped area centered around a hamlet of English-style thatched pavilions, the popular style of the day. 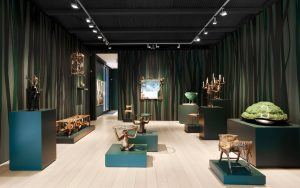 Among the highlights is a herd of 15 sheep, made by François-Xavier using bronze and epoxy, which seem to be grazing on the soft grass of the meadow. Dubbed “Moutons de Laine,” these celebrated sculptures were first presented with the title Pour Polytheme, a reference to a passage in Homer’s Odyssey that described how Ulysses and his men escaped from the cave of the cyclops Polyphemus by clinging to the bellies of his giant sheep. Les Lalanne’s early and longstanding patron Yves Saint Laurent was known to have enjoyed lounging on the sheep that he had installed in his own garden.

Another wonderful example to look out for is Choupatte (Géant), 2016, which depicts an oversized cabbage with chicken legs. Choupatte is amongst Claude’s most notorious works and a recurring theme that ran through her practice for decades. The duo’s cult-like following has grown exponentially in recent years and their collector base includes such luminaries as Peter Marino, Tom Ford, Marc Jacobs, François Pinault, and Bernard Arnault. For those who are not able to travel to France, don’t miss the outdoor Les Lalanne exhibition at the Clark Museum in Williamstown, Massachusetts.