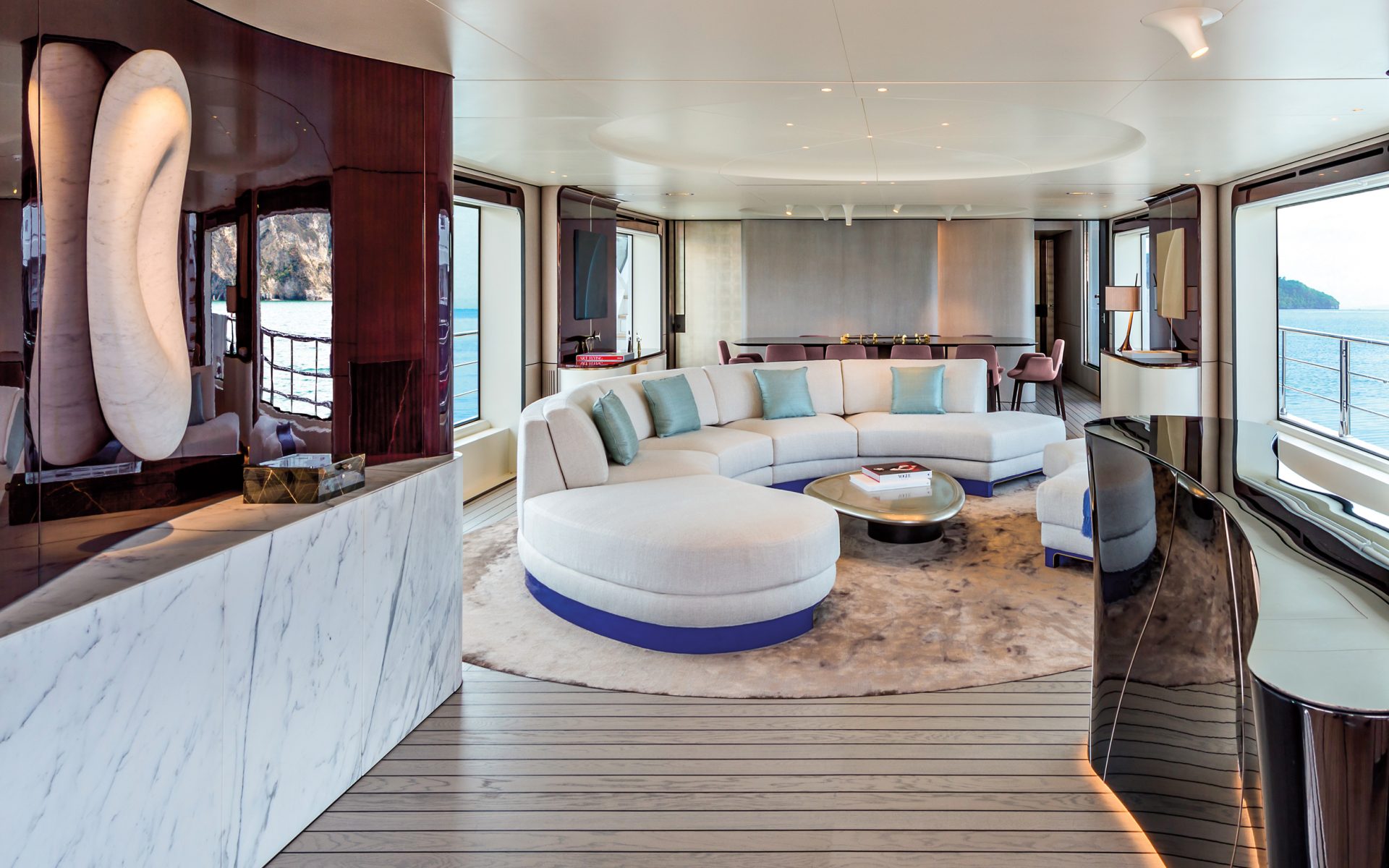 Ever since Achille Salvagni designed his first yacht interior—an unremunerated “challenge” commission for a client whose office he was in the process of completing—he has been perfecting his approach to these unique living spaces.

As compared with cultivating the perfect ambience for a luxury residence, designing a ship’s interior comes with its own pertinent set of questions, including what type of environment do you need when you’re in Capri one day, on the Côte d’Azur another day, and in the Caribbean yet another? And how do you proceed when you cannot connect the project to any neighborhood, heritage, or legacy? Salvagni addressed each of those points—as well as the quandary of how to mitigate the sharp aerodynamic edges and glossy, high-tech surfaces of a yacht’s exterior and the constants of intense, changing light and blue seas—for the interiors of a recently completed 115-foot Azimut yacht. The living spaces are all about curves, “softness and gentleness,” says Salvagni of the vessel, owned by an American banking family and boasting down-to-the-last-millimeter precision on three decks. “There is nothing that overwhelms you, no edge that disturbs you.” Indeed, every element exudes a supple elegance conducive to absolute ease and rest, from the elliptical master staircase, with its leather-finished, backlit onyx steps, to the salon’s vast circular seating area and the lobby’s wavelike mahogany console. In the main cabin, ingenious “wings” extend from the headboard to enfold round-edged nightstands. In the owner’s suite, Salvagni’s Sting lamp adorns a custom lacquered wood-and-brass desk and a chair in a Dedar fabric. Photo: Paolo Petrignani

Completed over two years by approximately 75 shipyard artisans—among them cabinetmakers, upholsterers, and metalsmiths working under Salvagni’s direction—the interior design is on par with this vessel’s pedigree: Legendary motor yacht designer Stefano Righini devised the concept and exterior styling of this Grande 35 Metri for Azimut Yachts, one of the industry’s leading high-end manufacturers, based in Viareggio, Italy. Since its unveiling, “a long list of clients have asked to have exactly the same boat,” says Salvagni, who describes himself as “above all an architect, then a designer, and thirdly a decorator.” That they would want this particular vessel with this specific interior speaks volumes about the assuredness of Salvagni’s aesthetic and the quality of his work—which has been receiving acclaim since his first foray into yachts in 2006. His initial challenge vessel won the World Yachts Trophies Award for interior design at the prestigious Cannes Boat Show in 2007. In the ensuing years, Salvagni—a designer steeped in historical references who was born in the Eternal City and received his master’s in architecture there—has become a growing force in yacht interior design and now divides his time equally between vessels, residences, and the flawlessly handcrafted furniture he showcases at Achille Salvagni Atelier in Mayfair, London, and Maison Gerard in New York. A confirmed wit, Salvagni has a final bon mot to describe the design jump from his initial 86-footer to the 120-foot superyachts he is now appointing: It’s like going from “a pied-à-terre,” he says, “to a big villa by the shore in Malibu.”

A version of this article first appeared in print in our 2018 Winter Issue under the headline Next Wave. Subscribe to the magazine.