“My passion is problem solving,” says British designer Thomas Heatherwick during a recent Zoom call from his London office. “I problematize everything.”

Over the course of his three-decade career, the Heatherwick Studio principal has channeled that relentless drive for finding solutions into a slew of high-profile projects, from Vessel in Hudson Yards to the 2012 Olympic cauldron. For Singapore’s new Eden tower—the first luxury residential building completed by his firm—the challenges were two-fold. First was addressing the island nation’s sweltering tropical climate, marked by soaring temperatures and year-round humidity, while the other was the untethered feeling so often accompanied by skyscraper living. “When you’re up high, you can feel like you’re in a helicopter,” he explains. “You’re not rooted, not grounded, hovering, and totally disconnected. It’s like being in a hermetically-sealed environment.”

To remedy them, Heatherwick turned to some of the lessons that he learned in 2013, when the firm created a dynamic learning hub for Singapore’s Nanyang Technological University. “It taught us how to take advantage of the tropical climates,” he says, noting that the team also mined the country’s historical architecture for inspiration, taking special interest in the grand colonial bungalows built between the late 19th century and the pre-war era of the 1930s known as “black and white” houses, each of which is equipped with its own private green space—a rarity in Singapore today. “Those are some of the most precious places to live in the city,” he adds. “We set the goal of making sure every apartment in Eden had the benefits of a garden.”

The resulting 343-foot tower, which recently opened to residents, features swaths of greenery cascading over balconies that sprout from the structure like flower petals, ensuring that each of the 20 units within does indeed come with a lush private oasis. Sourced from local plant-collectors as well as from nearby countries like Malaysia and Thailand, the integrated flora has a way of grounding the floor-through units, which are organized into wings so that each bedroom has a lush, courtyard-style view. “The tropical plant species form a kind of kinetic stained glass in the breeze,” Heatherwick says. 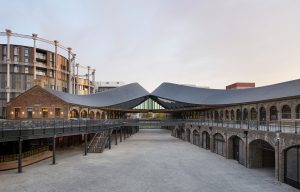 Creating natural ventilation was another key ingredient of the project. “We visited lots and lots of apartments in Singapore,” he recalls. “Typically the windows barely opened and they were air-conditioned within an inch of their lives.” So the team devised floor plans that were meant to fully connect to the outdoors. “Especially when you’re up at that height, open windows naturally allow air to flow much more freely—and they also cut down on energy usage.”

The balconies at Eden are bursting with tropical flora. Photo: Hufton+Crow

Of course, the global pandemic has changed the importance of spending time in a place that connects to nature. “We didn’t think we would ever be spending so much time in our homes,” reflects Heatherwick, noting that research supports the idea that nature has a restorative effect on mental health. “In the 1970s, professors Rachel and Steven Kaplan had a theory that our minds get fatigued after focusing too much on one thing,” he says. “Nature can help get your attention ready to work again.”

The interior of one of the units at Eden. Photo: Hufton+Crow

It’s fortuitous, then, that the firm is currently in the midst of finishing several projects heavily influenced by biophilia. One is a new pier located in the Hudson River, just off Manhattan, that has been dubbed Little Island. Comprised of a series of undulating mushroom-like planters, the 2.4-acre park is set to feature over a hundred species of trees and shrubs. And then there’s the Shanghai project known as 1000 Trees, which is a massive mixed-use development masterminded to resemble topography more than architecture. “I think the human-made world has dominated, and nature has been neglected,” he says. “This project will create oxygen for 2,000 people and take out tons of carbon per year. Whether or not you like trees in architecture, you can’t argue with that reality.”