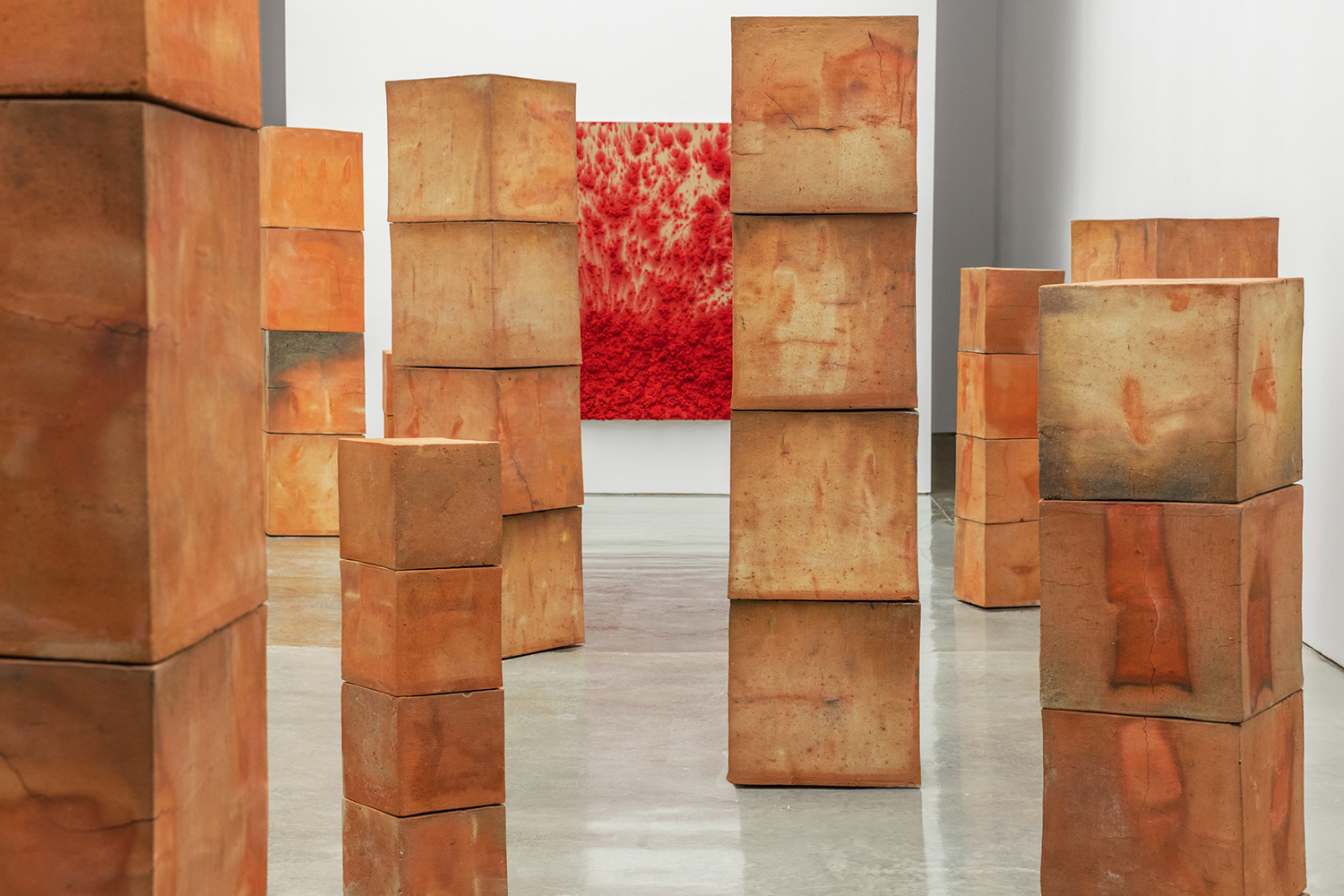 Internationally known for his monochromatic paintings, glazed volcanic rocks, and stackable clay cubes, the revered Mexican artist Bosco Sodi has most recently created buzz in the art and design worlds for his conception of Casa Wabi, a foundation and artist residency in the Mexican state of Oaxaca. Designed by Pritzker Prize–winning architect Tadao Ando in 2012, the non-profit aims to promote collaboration and social commitment through art.

Constructed in a region that’s prized for its production of handmade bricks, Casa Wabi maintains a clay pavilion that offers thrice-weekly classes for school-age children. In the process of constructing the compound, Sodi took his own kids to one of the brick factories to make clay sculptures and ended up playing with the materials himself. Before he knew it, he had hired one of the foremen to help create solid clay cubes for a new exhibition. Fast-forward to today, and the show, titled “Caryatides,” is on view through January 6, 2018 at New York’s Paul Kasmin Gallery. It’s the artist’s first solo show featuring the ochre bricks, which are stacked around the gallery in a forest of totems. The process of creating the minimalist sculptures started small, with individual pieces measuring about 10 by 10 inches. But as Sodi experimented with the earth, the shapes gradually grew to more than three times the size. Intensive to make, the large amounts of clay are prepared with the help of not only traditionally-trained workers but a donkey-powered mixer. The big cubes can take several hours to construct and are then air-dried for four months before they can be fired. They are baked two at a time for up to 14 hours while the fire is constantly fed wood, coconut skins, and jacaranda seeds—each of which creates a different patina. Bricks bake in the traditional Oaxaca kiln for up to 14 hours. Photo: Courtesy of Paul Kasmin Gallery

Another idea struck Sodi while talking with his artisans about their past lives as undocumented workers in the United States. As they were stacking brick timbers for a sculpture to be shown in Japan, the artist noticed that they appeared to be constructing a wall. In response to President Donald Trump’s own pledge to forge a barrier on the Mexican border, Sodi decided to subvert the notion and, this past September, trucked 1,600 clay bricks from Oaxaca to New York. Once in the city, the bricks were assembled by Mexicans into a 6 by 26-foot wall within Washington Square Park. New Yorkers were encouraged to tear it down one brick at a time and were each given a brick as part of the communal artwork.

“I’m not a political artist, but I felt it was something I had to do,” Sodi explains to Galerie. “My wife was concerned because I have an artist’s visa, but I told her that I believe in this project and need to do it. I would be a coward if I didn’t just because of a visa.” Sodi, an immigrant from Mexico City himself, experienced his own fortuitous series of events on his path to success in the United States. Born the son of a chemical engineer and a student of Marxist philosophy, at age four he was diagnosed with attention deficit disorder and dyslexia. Instead of treating him with medication, his parents enrolled him in art therapy classes three times a week for the next ten years. “There are three things that keep me calm: Making art, sitting in front of a fire, and watching fish swim around an aquarium,” says the artist at his massive Red Hook studio.

Sodi’s first big break came in the late 1990s, when, after working in Paris for a year, he was collecting a group of his drawings from the framer and was told that a collector wanted to buy the whole bunch. “It made me realize that I might be able to live off what I love,” Sodi reveals. After various chance encounters with the likes of Spanish painter Antoni Tàpies or dealer Carles Taché, and working in studios in Paris, Barcelona, and a stint in Berlin, New York was next on the cards. His gallerist in Madrid, Álvaro Alcázar, connected him to the artist Ray Smith, who had a whole floor of a massive building in Red Hook that he shared with Bruce High Quality Foundation, Ron Gorchov and Saint Clair Cemin. Smith rented Sodi a studio who immediately got to work.

Now one of today’s most successful working artists, Sodi is represented by nine of the world’s top galleries—including London’s Blain/Southern, Tokyo’s Scai the Bathhouse, and Sao Paolo’s Luciana Brito—and his sublime works are featured in a significant array of private and institutional collections worldwide. There’s an old Chinese saying, credited to Confucius, which reads, “The man who moves a mountain begins by carrying away small stones.” Bosco Sodi may not be moving mountains, but he certainly has found a way to use art to move people in an infinite number of ways.