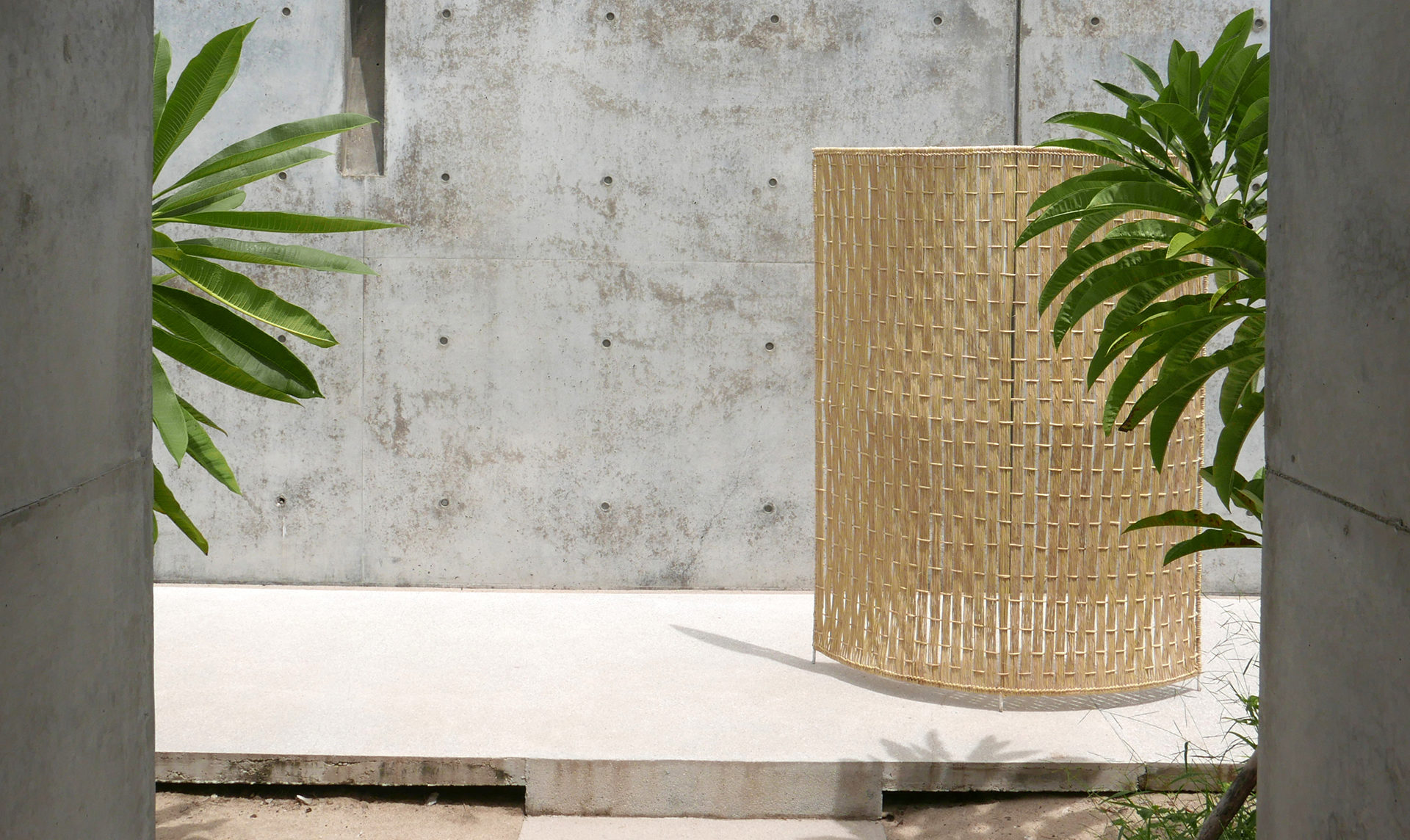 Julie Richoz and Nicolas Le Moigne conjure a stunning series of screens and lights thanks to Bosco Sodi’s residency program in Oaxaca, Mexico For five weeks in September and October, Swiss designers Julie Richoz and Nicolas Le Moigne found themselves far from home. As part of a Mexico City Design Week collaboration between the Swiss Embassy in Mexico City and Oaxaca’s Casa Wabi—the non-profit launched by Mexican artist Bosco Sodi in 2014—they took up residence at the foundation’s concrete, Tadao Ando–designed headquarters on the sunny shores of Puerto Escondido. Twice a week, they would make the one-hour trek to the small Michoacán town of Santa Catarina, whose population hovers around 1,000 residents, and engage in a dialogue with the local palm weavers.

Pairing local craftsmen with artists, and for the first time in this instance, designers, has been part of Casa Wabi’s residency program since the foundation’s inception. “For us, it’s essential to give the artist a space of introspection,” says Casa Wabi director Carla Sodi, emphasizing the exchange of knowledge and ideas as the core of the program. “It’s also a process of growth.” Richoz with one of her wire-and-palm screens. Photo: Fundación Casa Wabi

The yellow cord spun from the palm fibers provided a foray outside each designer’s comfort zone; Paris-based Richoz has a history in sculpting smooth planes of metal, glass, and porcelain. Lausanne, Switzerland–based Le Moigne, meanwhile, has done industrial projects of cement compounds for Swiss manufacturer Eternit, as well as limited-edition furniture in materials like leather and bronze. Accustomed to crafting linear panels for the backs of chairs, the weavers they were each paired with found themselves pushing the boundaries of their own practices as well. Le Moigne’s light fixtures, for example—a wall mount, a lantern, and a sculptural orb assembled from flat, triangular planes—are textured on the surface to form intricate geometric patterns and protruding waves. Richoz, on the other hand, produced a suite of sheer room dividers where the palm fibers were woven around wiry metal frames. In contrast to the sturdiness of the weavers’ traditional craft, “The transparency was a completely new experiment,” she says.

During Mexico City Design Week, their pieces debuted at Casa Wabi’s exhibition space in Mexico City’s Santa María neighborhood, where they’ll be on view through November 12. At the entrance, a TV plays a documentary of the designers’ time in Santa Catarina, sketching in notebooks with their collaborators and handling long stretches of palm fibers while chickens roam in the background. Trumpet sounds intermittently reverberate during the looped footage; this is the part of the documentary where the village celebrates the life of a grandparent who passed away. “I think this was a more human exchange,” says Richoz. “In Europe, artisans are more detached from their work. In Michoacán, what was surprising is that their workshop is connected to their house. I worked with Pablo, whose mother prepares the palm. His father sometimes helps him do the weaving, and then his sister prepares the tortillas, and we’d share lunch with their families. It’s funny now to hear about the home office.”